Real Estate Forecast for 2018: Mostly Sunny, With a Few Clouds

The experts agree that now is still a great time to be invested in Philadelphia real estate. Even if, as one local real estate mogul said, we're sailing into uncharted waters. 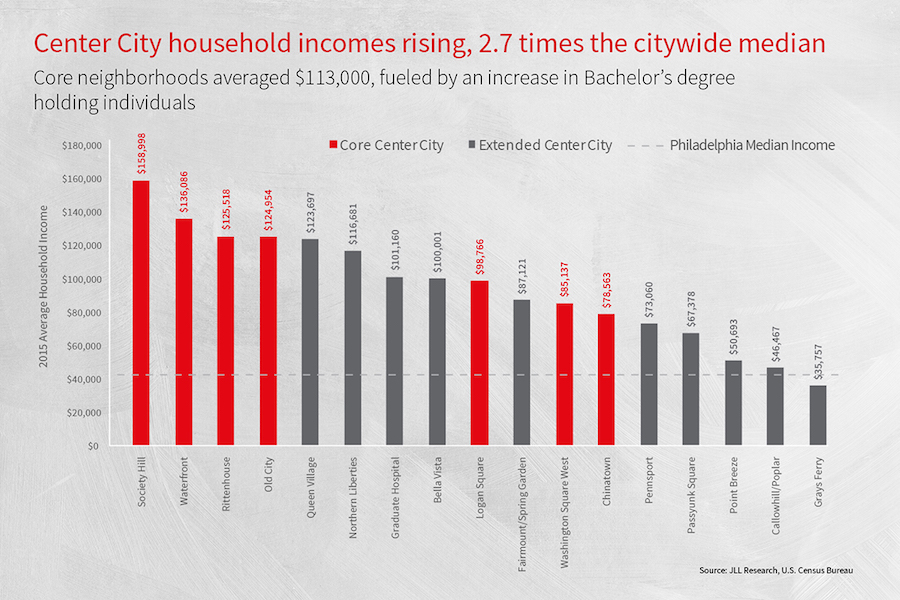 What a year it’s been for real estate in Philadelphia!

We’ve seen the emergence of a residential seller’s market in the city the likes of which this area has never seen before. Construction cranes have been kept busy assembling ever-taller office buildings and new high-end apartment towers. The makeover of the region’s premier edge city and many of its shopping malls continues apace. And everyone seems quite pleased with the money they’re making doing all of this.

According to the experts who spoke at the Urban Land Institute Philadelphia’s annual “Real Estate Forecast 2018” panel on Nov. 30th at the Union League, we can pretty much expect all this to continue in the year ahead, give or take a few apartment towers.

Lauren Gilchrist, vice president and director of research in JLL’s Philadelphia office, put it succinctly: “This is a particularly incredible moment for Philadelphia real estate across all asset classes.”

One of the reasons it’s so incredible, ironically enough, has to do with the historically unexciting performance of the regional economy. In terms of both population and output, Philadelphia continues to grow slowly: its two percent GDP growth since 2010 is lower than any of the nation’s 10 largest metropolitan areas except Chicago, and the area has added about 14,000 new residents annually over that same period, a drop in the bucket for a metropolitan area of some six million.

The flow of people from outside the region confirms this. According to “Emerging Trends in Real Estate,” the 2018 edition of which was also discussed at the conference, Philadephia had the second-greatest influx of new residents from primary markets of all the secondary markets in the United States. The roughly 40,000 in-migrants since 2010 is exceeded only by the nearly 90,000 who moved into Southern California’s Inland Empire (Riverside-San Bernardino). 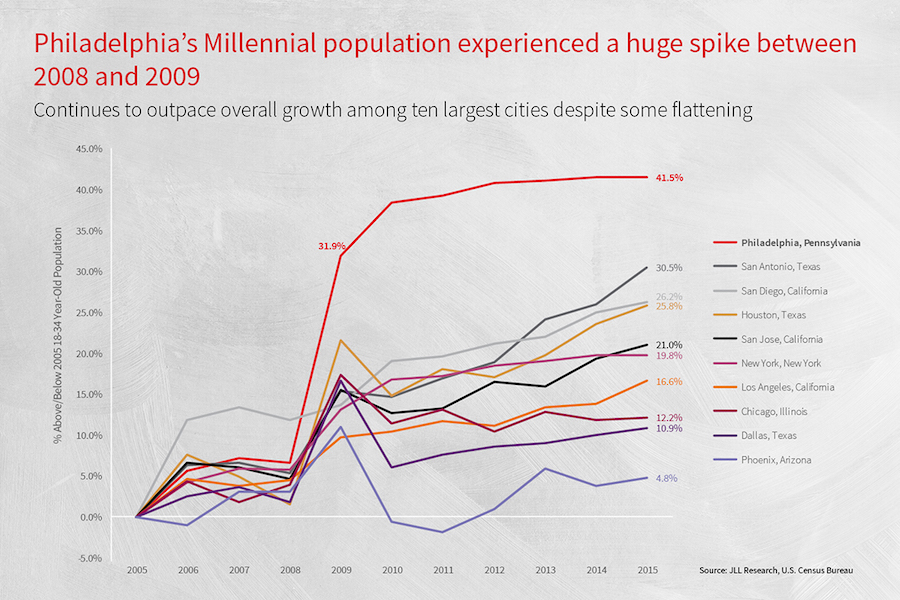 While the Millennial influx has peaked, the huge spike in 2008-09 has contributed to the higher education level and affluence of Greater Center City residents.

That overall modest growth rate, however, masks some wide intra-regional differences. In the period from 2000 to 2016, for instance, the population of Center City rose by 27 percent, and that of the areas immediately to its north and south — “greater Center City” — rose by 17 percent. And these new residents are far better educated and more affluent than the region as a whole: 86 percent of Center City residents hold a bachelor’s or higher degree, and their average household income is $113,000, with Society Hill residents averaging just under $169,000 a year.

And as these people have flocked to the city core, the companies and developers have followed them.

Housing market: Slowdown at the top for rentals

On the residential side, the multifamily market has been where the bulk of the action is. Gilchrist stated that 2,500 new units came on line this year, with another 2,700 set for delivery next year and 3,500 more on the drawing boards. But, she continued, “most of those proposed units will never get out of the ground because the supply is outpacing absorption.”

And that has to do with rental rates: “The product that’s having a tough time right now is at the top of the market,” she said. “$3,500 a month for a one-bedroom apartment is expensive when a landlord will rent you one for $1,500 a month.” And the economics of building here make it hard to make the numbers work building new downmarket apartments.

On the single-family residential side, the seller’s market is likely to continue because there, supply is not keeping pace with demand, in line with national trends. 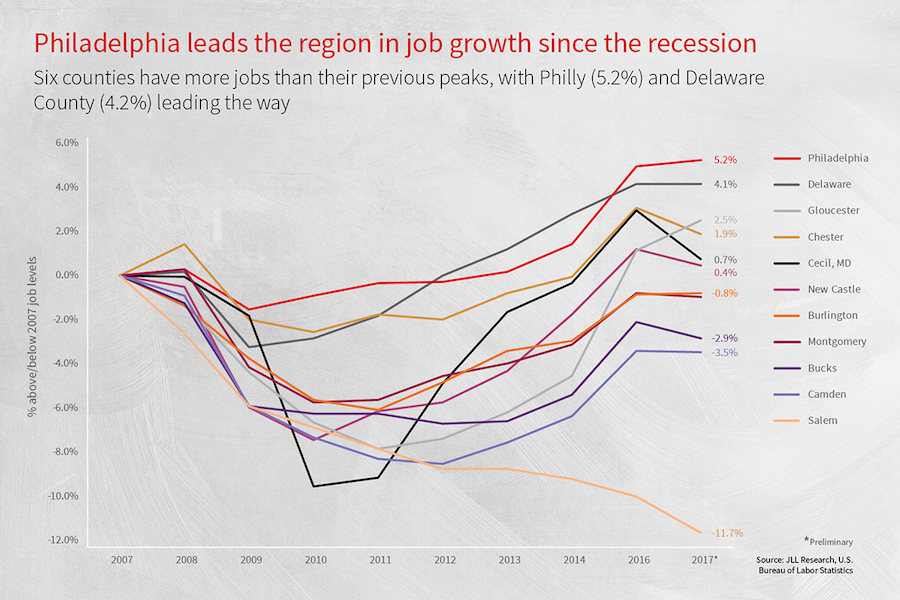 “Philadelphia has never previously recovered all the jobs it lost during a recession,” Gilchrist said at the conference.

The people creating this demand are also luring employers into the city. Gilchrist said that 1.4 million square feet of space has been leased to companies new to the central business district since 2015.  Vanguard’s highly publicized opening of a satellite office on Center City’s west edge is actually a harbinger of what’s to come, she continued: “If you commute to the western suburbs between 6 and 9 a.m., good luck, because your company is now considering a gateway office in the city.”

That office, however, will probably not be located in the Market Street West office canyon unless it’s in a trophy-class building like the second Comcast tower now nearing completion. In terms of rent growth, she said, trophy and creative office space rates continue to rise while class A space is struggling to hold the line. Leases on some six million square feet of Center City office space — 15 percent of all the office space in the CBD — will expire in the next three years, and tenants currently renewing are already giving space back, in line with a national trend where companies require less square footage per employee.

What this may well mean in the future is more older office buildings going residential down the road, followed in due time by some new or recycled office space to replace the old. Brandywine Realty Trust CEO Jerry Sweeney pointed out that functional obsolescence is a real issue for the local office market: “80 percent of our office space was built before 2000, and 50 percent was built before 1980,” he said. On top of that, the trend towards increased worker density will have ripple effects on office building design, from parking to bathrooms to elevators. “In many cases, the cost to retrofit the older buildings will exceed their capacity to generate rent growth,” Sweeney said.

All of these residents and workers will still need places to shop too, for they will still be buying most of the things they need from brick-and-mortar retailers.

“Everyone’s heard that the mall is dead. In reality, that’s all fake news,” said PREIT CEO Joseph Coradino. “Over 90 percent of all shopping is done in retail stores. E-commerce is definitely growing, but from a smaller base, and it probably won’t pass 17 percent of all sales in the next 20 years.

“It’s noteworthy that Amazon is buying Whole Foods and is building bookstores across the country. Who buys books in stores?” (Who indeed: Amazon started out as an online bookstore that put thousands of brick-and-mortar booksellers, including one large chain, out of business.)

Coradino went on to assert that the online-only retail model isn’t really all that profitable even: “Amazon doesn’t make money selling you stuff. It makes money off the cloud and by selling Amazon Prime memberships.”

Coradino sees “omnichannel” as the future of retail: companies that combine a strong online presence with a brick-and-mortar one. In particular, he said, “BOPUS” — “buy online, pick up in-store” — has tremendous potential because shoppers usually make additional purchases when they come to pick up their online purchases in-store.

PREIT’s big-money bet that malls have a future is Fashion District Philadelphia, its joint venture with Macerich that is currently making over The Gallery at Market East. “It’s morphed since we began the project,” he said. “We originally called it Fashion Outlets, but retailers pushed back. They said, ‘We don’t want to be in an outlet mall, we want to be in a full-price mall.’ So we will have flagship stores and the first high-end dine-in movie theater in the city.”

That last item also points to a national trend in retail: shopping malls transforming themselves into multipurpose meeting places through the addition of entertainment, dining and recreational tenants.

Coradino also said that PREIT anticipates it will soon be able to announce that a major European retailer will open its first U.S. location in a first-floor space in the Fashion District mall.

“We’re pretty excited about it, and we think it has the potential to easily take its place as the number one property in our portfolio, ahead of the Cherry Hill and Willow Grove malls,” he said of Fashion District.

Coradino also said that the city still had room to improve in the upscale retail department. “Walk down Walnut Street and the first thing you’ll notice is a lot of closures,” he said. “If you were to transport yourself to Fifth Avenue, Michigan Avenue or even the Country Club Plaza, they have better shopping than we do.”

Market Street East is poised to contribute to that improvement. JLL’s first-ever national report on “City Retail” identified the street as the top prime retail corridor in the United States in terms of its growth potential, saying it’s “on the verge of a major repositioning that is years in the making.”

So if, as just about everyone who spoke at the ULI panel said, this is an exciting time to be in Philadelphia real estate, one reason it’s exciting is because the market is venturing into unknown territory. “None of us know where terra firma is,” Sweeney said. “So what does a real estate company do? We enjoy this transition time. You need to keep your eyes focused forward and realize that past practices are no guarantee of future success.”