6 Ways I Made My Small Bedroom Look Way Bigger

It's easier than you think. 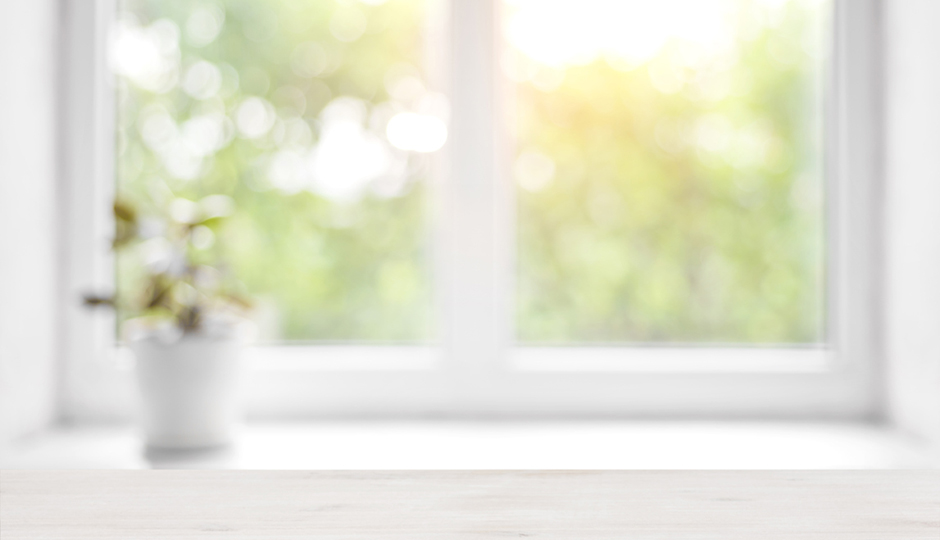 From a square-footage perspective, my bedroom probably wouldn’t be considered “small.” It’s on the third floor of our 100-year-old South Philly rowhome and spans the full width of the house. But its unfortunately low ceilings — and my too-big, too-dark, poorly planned out furniture — made it feel claustrophobic. I hated it from the day we moved in four years ago.

A few months back, I’d finally had enough. The bed and the mismatched dressers were in the same spots the movers had dropped them. The vintage vanity I’d scored on Craigslist years ago was looking beyond sad and tired, its bad paint job pushed well beyond the “shabby chic” point. (And I don’t even like shabby chic things to begin with.) The bedspread was appallingly dark. The dark wood headboard further added to the blackhole-ness of the bed situation. It was just all so … thoughtless. I can’t even say it was ill conceived because it was never actually conceived to begin with.

So earlier this spring, we got to work. In the course of a few weeks, we’d completely changed the look and feel of our room. And without having to actually raise the ceiling even an inch, the room now feels — dare I say it — huge now. Airy. Glorious.

Here’s what we did.

1. We removed a dresser.

Looking at our room, it occurred to us that we had at least one big, hulking piece of furniture on each of the four walls: the vanity on one wall, the bed and bedside tables on another, and dressers on the other two. Both of the dressers and the bed frame were made of dark wood, creating an overall darkening affect in the room and making it feel smaller than it is. Add this to the fact that while we’re lucky enough to have a large tree outside of our home, the leaves block a lot of sunlight when the tree is in full bloom. So in a fit of decluttering, we decided to remove one of the dressers from the room. Boom — immediate airiness. 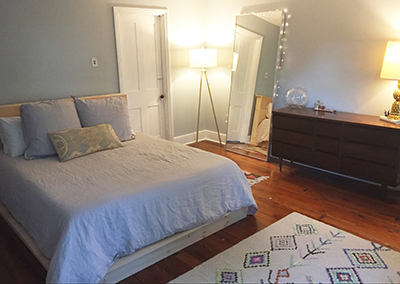 A view of the new platform bed and mirror. I know, I know — we need stuff on the walls.

2. We rethought the layout.

Why is our bed on that wall, anyway?, we asked ourselves. In its old location, the bed was visible through the door and the first thing you saw when you rounded the corner coming up the stairs. It visually cut the room in half. We did some measuring and realized our queen-sizer would juuuuuust fit on the wall next to the door, giving you a clear view of the room and its windows when you come up the stairs. So we swapped it with our low-lying midcentury modern dresser — the one that remained in the room after decluttering —  and, ahhhhh, we felt like we could breathe again.

Now that the dark dresser was gone and the bed was moved to a different wall, we had some space left over for a lamp and mirror. We opted for a tall standing mirror (thanks, Ikea!) that we simply leaned against the wall. The mirror reflects light and, as mirrors are wont to do, makes the space feel deceivingly larger. Done and done.

Ten years ago when we got married, my husband’s grandmother was kind enough to gift us a giant four-poster bed. The bed is actually gorgeous, and at the time I really wanted it, but three seconds after moving into our first tiny post-wedding apartment, we realized a hard truth: The thing was huge. Way too big for most of our homes ever since, including the one we currently own.

So at some point, we swallowed our pride and left the giant bed at my parents’ house, where it’s been ever since. Instead, we got a junky metal frame for free on Craigslist. While the frame could physically fit up our steps and get into our room, it was just ugly and still felt rather big once you added a box spring and an extra thick mattress on top. A few years ago we DIY’d a wooden headboard out of some salvaged wood; it looked nice enough, but wasn’t exactly the style we were going for. Plus, it was just another dark thing in the room. Time to purge.

To replace it, my ever-handy husband dreamed up a low-to-the-floor platform bed made out of wide, light pine planks. It would fit perfectly on the wall opposite the windows (see above), and with a secret storage compartment he built into the back, it would eliminate the need for bedside tables. The less furniture in there, the better, as far as we were concerned. We added some new crisp white sheets and a lighter duvet cover to the bed, which helped brighten everything up even more. Good-bye, blackhole bedroom!

5. We raised the curtains.

This was an old trick I gleaned years ago from some home blog I used to read. When you have low ceilings, you can raise the curtain rods a few inches higher than the top of the window trim to make the windows appear taller and the ceilings higher. Totally works. 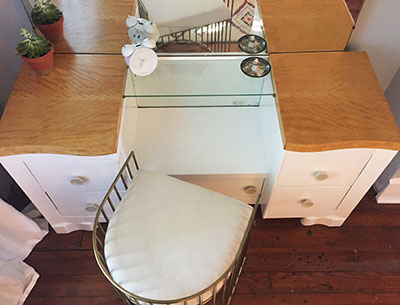 A view of the top of the refinished vanity

6. We brightened up the vanity.

I have to say, I love my vanity. Well, I love the concept of it, anyway: the idea of having a place to sit and do my hair and makeup in the morning just makes me feel glamorous. The Art Deco one I got off of Craigslist a few years back came to me painted a hideous brown. Back then, I did a terrible sanding job and painted blue on top of it. It was fine for a while, but then the blue started chipping and showing the brown underneath, and eventually the thing looked horribly beat up.

We considered throwing in the towel and just finding another vanity, but to be honest I was feeling a little guilty about throwing away a perfectly functional piece of vintage furniture. After all, it wasn’t the vanity’s fault that its previous and current owners decided to cover it in bad paint. Instead, we decided to sand it just to see if it could be saved. Well, wouldn’t you know, the thing is gorgeous now. I love the way it turned out. We were able to sand the top to reveal some gorgeous honey-toned wood underneath, and while the base was too far gone to stain and seal, we sanded it the right way this time and painted it high-gloss white. The new paint reflects the light in the room, helping everything to feel — you guessed it — a whole lot bigger.

While our bedroom isn’t completely finished yet — we still need to get some art on the walls, a picture in a frame and some smaller decor here and there — the big thinking and reworking is behind us. What we’re left with is a room that feels much bigger than its actual size, and one that feels more like the rest of the house: well thought out, well executed, and, most important, more like us.