Yes, Virginia, There Really WAS a Philadelphia School

Two recent college grads with a passion for architecture make the case that the Philadelphia architects of the 1960s and 1970s created a coherent architectural movement in an exhibit at Penn. 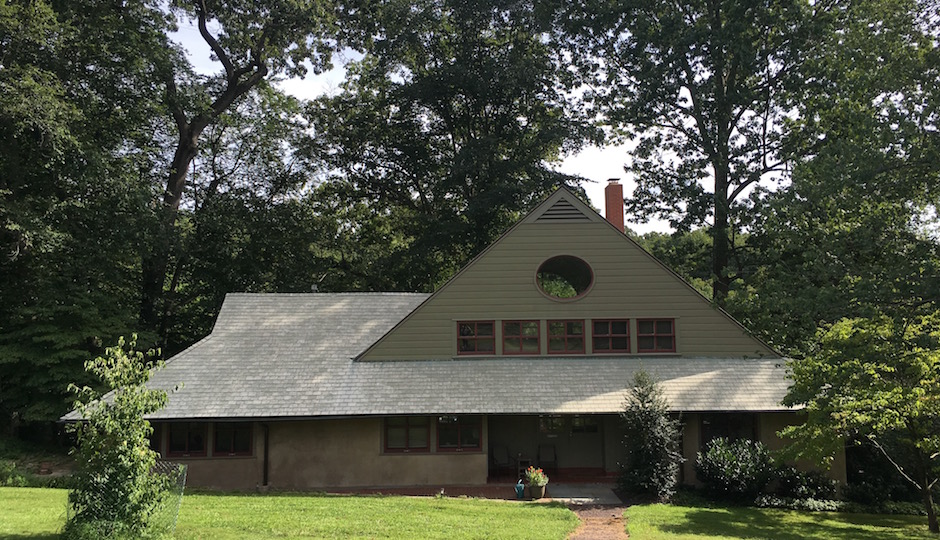 You may have heard the term “Philadelphia School” used to refer to a group of architects who dominated, and some say transformed, the city’s built environment in the 1960s and 1970s: Louis Kahn. Robert Venturi. Robert Geddes. John Bower. Ehrman Mitchell and Romaldo Giurgola.

Yet when most of us use the term, we don’t use it in the way one uses “Chicago School” to refer to the architects that ushered in the modern era in that city: Daniel Burnham, Henry Hobson Richardson, Dankmar Adler and Louis Sullivan, John Root and their contemporaries.

An exhibit at the Philomathean Society at the University of Pennsylvania through April 17 argues that we should.

The exhibit asks, quite simply, “What Was the Philadelphia School?” It then goes on to answer the question in part by describing what it wasn’t.

One thing the architects who made up the Philadelphia School weren’t was showy.  “We lack the purist sculptures of Europe and Boston and Chicago,” exhibit organizers Jason Tang and Izzy Kornblatt wrote in their introduction. 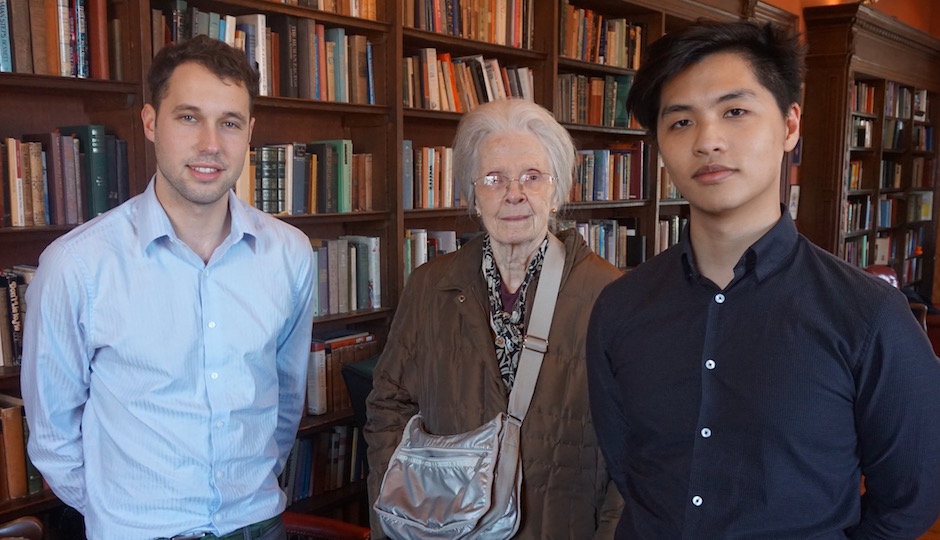 That lack of showiness also has deep roots in this city. The architects of the Philadelphia School distinguished themselves to a large extent by producing buildings that responded to their surroundings rather than stood out from them, and they used materials that harmonized with the city’s traditional modes of building: brick, wood, and concrete instead of glass and steel.

The very first illustration in the exhibit opens up the prehistory of the movement. It’s a 1939 sketch Kahn made for the office of architect Louis Magaziner, who had been commissioned to produce a new addition to the Italianate building that then housed the Big Brother Association. Both buildings still stand on a narrow alley behind the College of Physicians; while they are vacant at present, the harmony between the red-brick Modernist addition and the original structure remains noteworthy and pleasing to this day.

Such blending of past, present and future is a hallmark of the Philadelphia School. It was something both Tang and Kornblatt noticed on their travels around the city as undergraduate students — Tang at Penn, Kornblatt at Swarthmore.

“Izzy’s into architecture,” Tang said. “We met while we were exploring Philadelphia.”

And as they explored, they noticed the common threads that ran through the work of the Philadelphia School architects. “We think it’s more than a collection of architects who were around Penn. It’s a distinct aesthetic.”

That aesthetic could be described in several different ways: Brutalism with a human face, as expressed in much of Kahn’s work. At once history-conscious, sometimes even medieval in spirit, yet forward-looking. Very context-sensitive. And definitely modest. 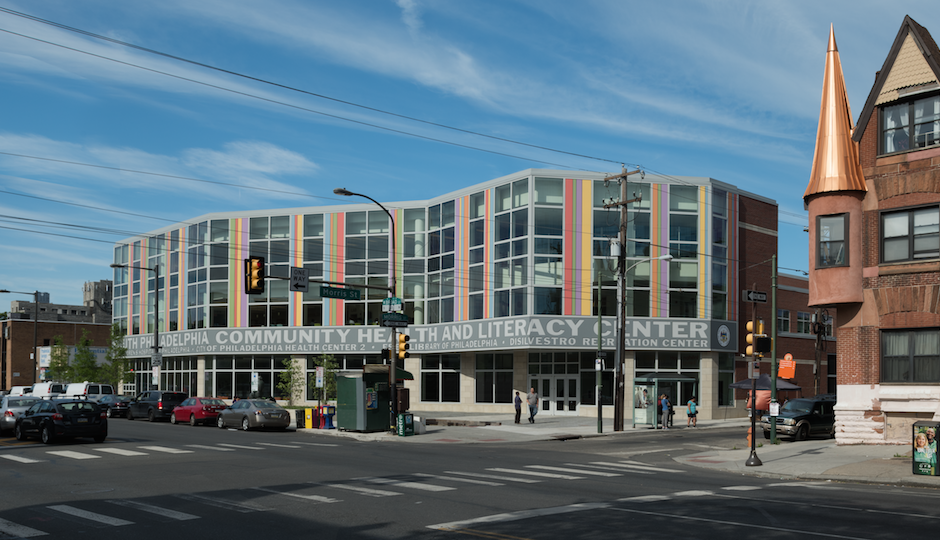 The South Philadelphia Community Health and Literacy Center (VSBA, 2016, above), Tang suggests, is a recycling-of-sorts of the firm’s never-built Philadelphia Orchestra Hall (1993, below) in its use of color and graphics. 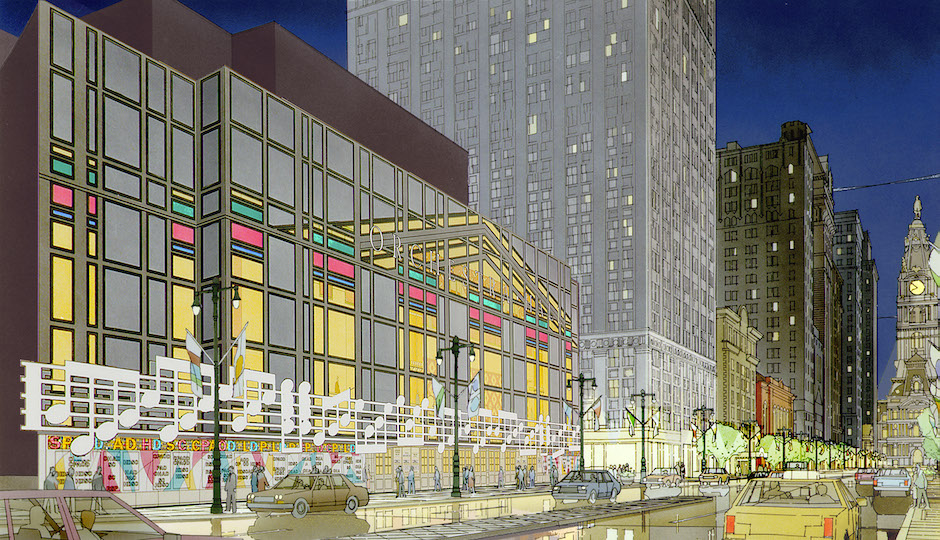 With one exception: The work of Venturi & Rauch (later Venturi, Rauch & Scott Brown) and successor firm Venturi, Scott Brown & Associates (VSBA) does incorporate elements of whimsy and flash absent in the others’ work, which is perhaps to be expected from the architects who told us we could learn from Las Vegas. But the whimsy and flash all reference their buildings’ functions and settings, thus placing them firmly in the camp of their peers. And both John Rauch’s Wissahickon House and VSBA’s Lenfest Hall at the Curtis Institute of Music demonstrate that the architects who founded the firm also know how to work within that more modest Philadelphia tradition.

The photos, sketches and models on display in the exhibit come mostly from Penn’s Architectural Archives. Some, however, were lent by the architects themselves: VSBA, for instance, lent the models of their revised Philadelphia Orchestra Hall proposal and Lenfest Hall to the exhibit.

And along with the prehistory of the school, there’s a little post-history as well: Erdy McHenry Architecture contributed a scale model of its Evo residential tower to the exhibit. Tang noted that the building’s ground-floor supports echo the structure of the beams that support the platform over the Amtrak Northeast Corridor tracks on which it sits and that while it employs steel and glass, the building still incorporates irregular voids and recesses that give it the same sort of texture and depth as the buildings the Philadelphia School produced. 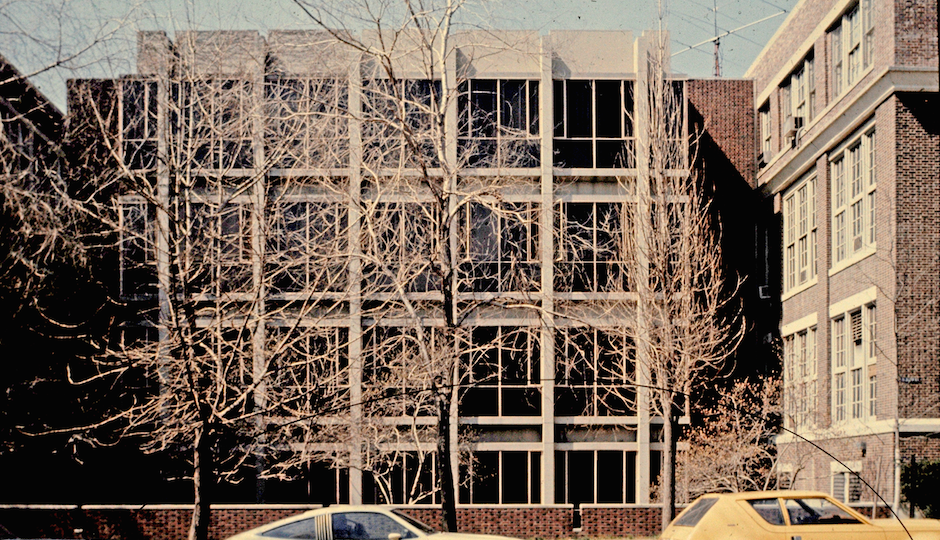 Some of the buildings in the exhibit, like the Pender Engineering Lab at Penn, have been lost to posterity, replaced by newer buildings. Others, like VSBA’s Philadelphia Orchestra Hall and the entire Vance Hall project for Penn’s Wharton School, were either never built or never completed as planned. But most of the structures featured in this exhibit still stand today, which means you can create your own walking tour after seeing this exhibit and decide for yourself whether Tang and Kornblatt have succeeded in making their case for the Philadelphia School as a distinct movement that took modernist architecture forward by invoking the past. This observer thinks they have.

“What Was the Philadelphia School? An Architectural Exhibit” is on display through April 17 in the Philomathean Art Gallery on the fourth floor of College Hall on the Penn campus. The gallery is open Monday through Friday from 2 to 6 p.m., Sunday from 3 to 6 p.m., and at other hours by appointment. The gallery is not wheelchair accessible.

The Philadelphia School: Past and Present 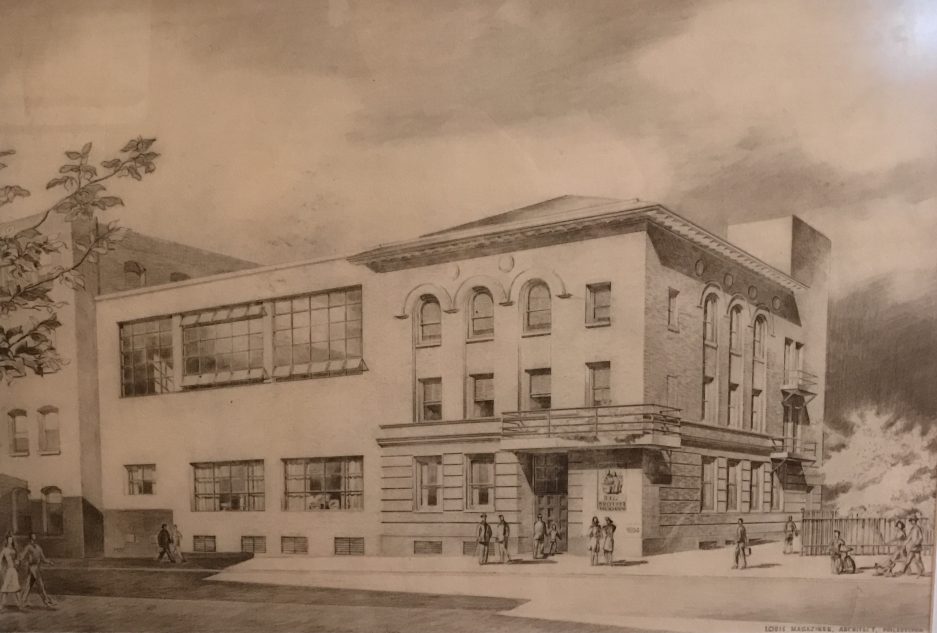 Louis Kahn's sketch of the Louis Magaziner firm's 1939 addition to the 1894 headquarters for the Big Brother Association. 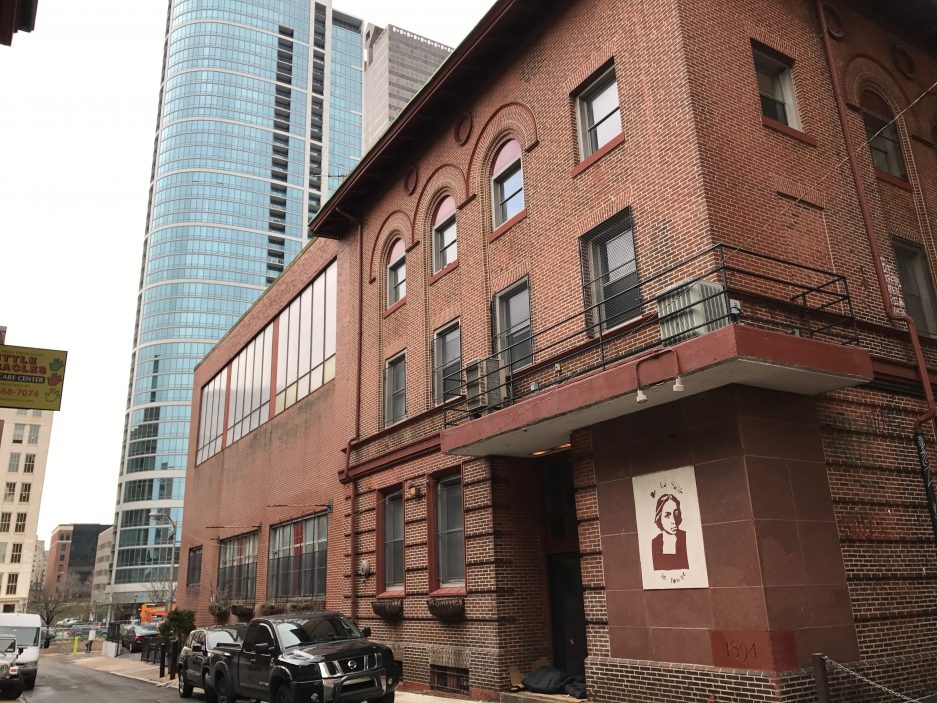 The Big Brother building and its addition today; the buildings are currently vacant. Photo: Sandy Smith 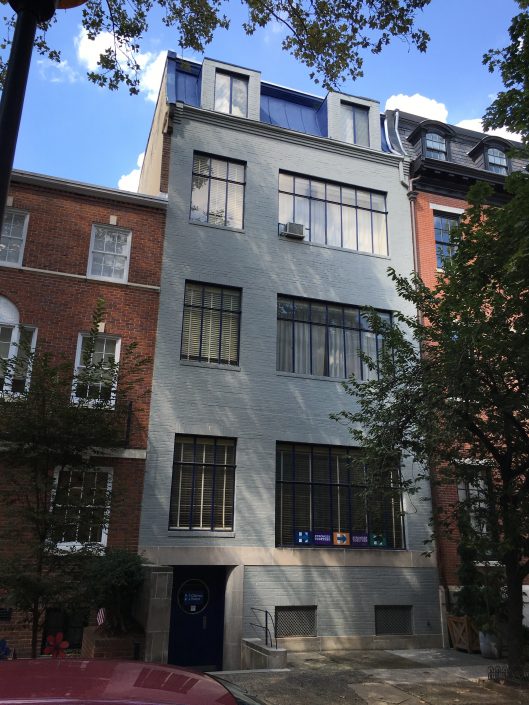 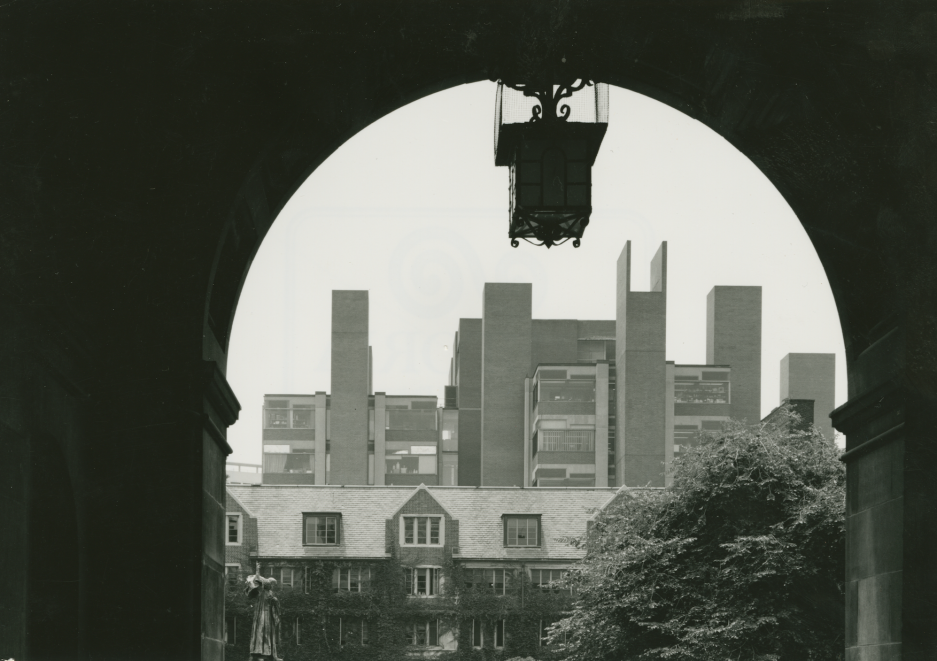 Richards Medical Research Laboratories. Louis Kahn, 1960. The building's service towers echo the Gothic form of the Quandrangle dormitories, behind which the building sits. 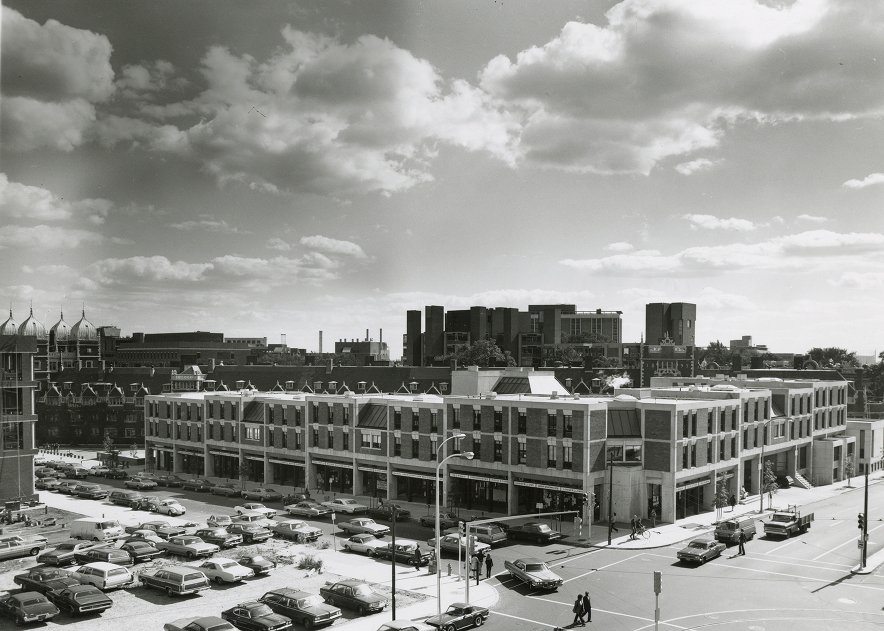 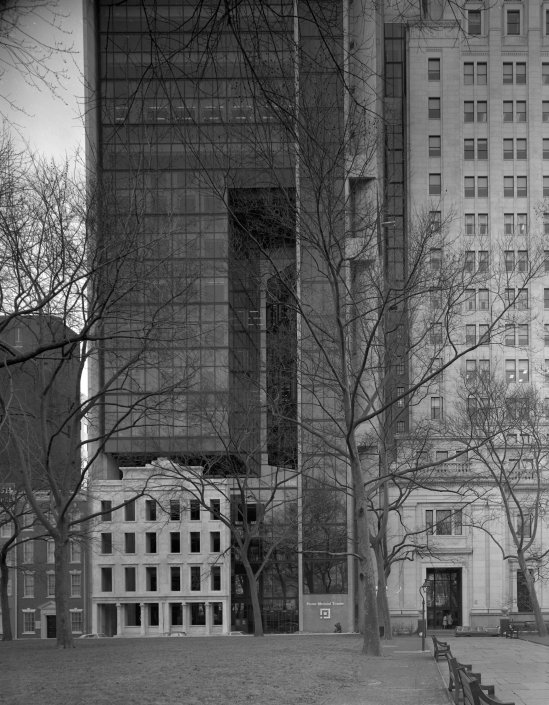 Penn Mutual Tower. Mitchell/Giurgola, 1973. The building includes a literal reference to the past in the form of a preserved early-19th-century commercial building facade. 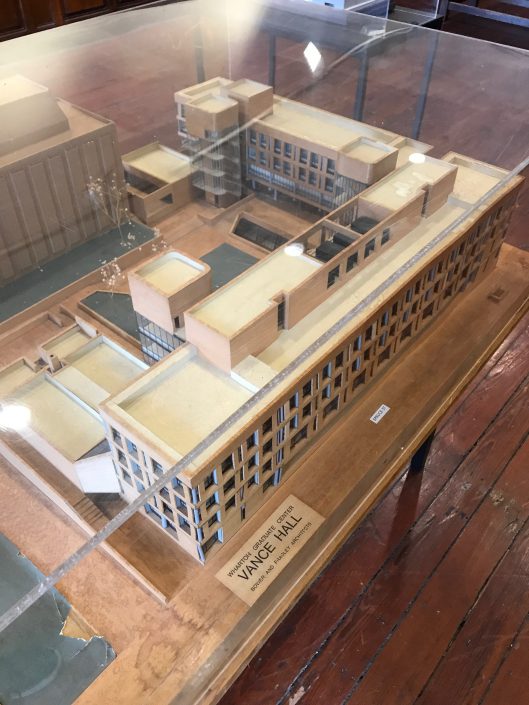 Vance Hall (Bower & Fradley, 1972), home to the graduate division of Penn's Wharton School, was designed as a two-building complex. Only one of the buildings was completed. Photo: Sandy Smith