41 percent of Millennials in the Philadelphia metro have yet to fly the coop. What's to blame? 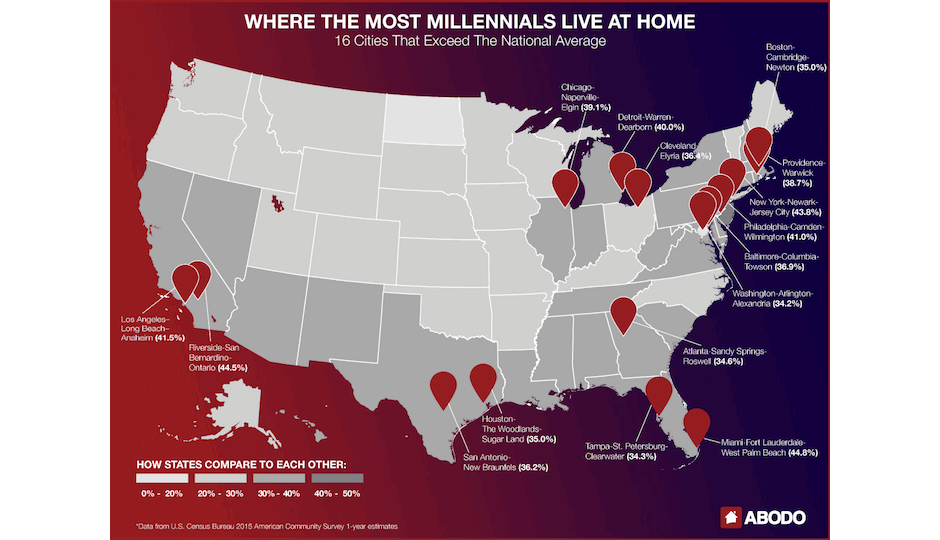 When you reach a certain age, you move out of mom and dad’s house. That’s how it’s supposed to play out at least, right?

Oddly enough, apparently not – at least not here in Philadelphia, that is. Our lovely metropolitan area has just been ranked the area with the fifth-highest percentage of Millennials still living at home.

Forty-one percent of Millennials in the Philly metro still live with Mom and Dad, according to an analysis of Census data conducted by the apartment search site ABODO. This number exceeds the national average of 34.1 percent but is not alone in doing so. Another 16 metropolitan areas with populations over 1 million in the United States have percentages over the national average. (Philadelphia’s percentage of Millennials still living with their parents is in line with the Pennsylvania statewide average, however.)

Before you assume that this is just a generation of college kids not yet ready to fly the coop, let us remind you that the millennial generation includes anyone who is currently between 18 and 34 years old. So why are so many members of the largest, most diverse, and most educated generation in history still living with their parents?

Well, the answer isn’t that simple and has more to do with a combination of factors than one single factor alone. Some of these factors include rents, low pay, education level, and student loan debt.

Let us put things into context using the data from our own metropolitan area. According to the U.S. government, a cost-burdened renter is someone who spends more than 30 percent of his or her income on rent each month. In Philadelphia, the median monthly rent for a one-bedroom apartment is $1,026. The median monthly income of a millennial living at home is $1,427. So, the average millennial living at home who wanted to move out and live on his or her own would spend a whopping 74 percent of his or her monthly income on rent alone. It’s clear that he or she would be severely cost-burdened.

Then, pile on student loan debt (amongst other things), and the picture starts to become even more clear.

“Many Millennials are not only earning less than their parents did as younger adults, but the majority of Millennials who pursue college degrees are eventually saddled with an average student loan debt hovering around $30,000,” says Sam Radbil, the senior communications manager at ABODO.

In case you’re wondering, this surprising statistic is emblematic of a national trend: a recent report from the Pew Research Center noted that for the first time in modern U.S. history, more 18- to 34-year-olds are living with their parents than living in any other type of household arrangement.

While many people might be quick to assume that Millennials are choosing to stay in the nest as opposed to seeking independence, outside factors may be what’s actually preventing them from spreading their wings and flying to a life of their own.