Developers Duel for Right to Build on Chinatown Block

The mixed-use projects could finally mean traffic for the subway station beneath the site. That station, however, places constraints on the would-be builders, who presented dramatically different yet similar visions for the site at a Monday evening informational meeting. 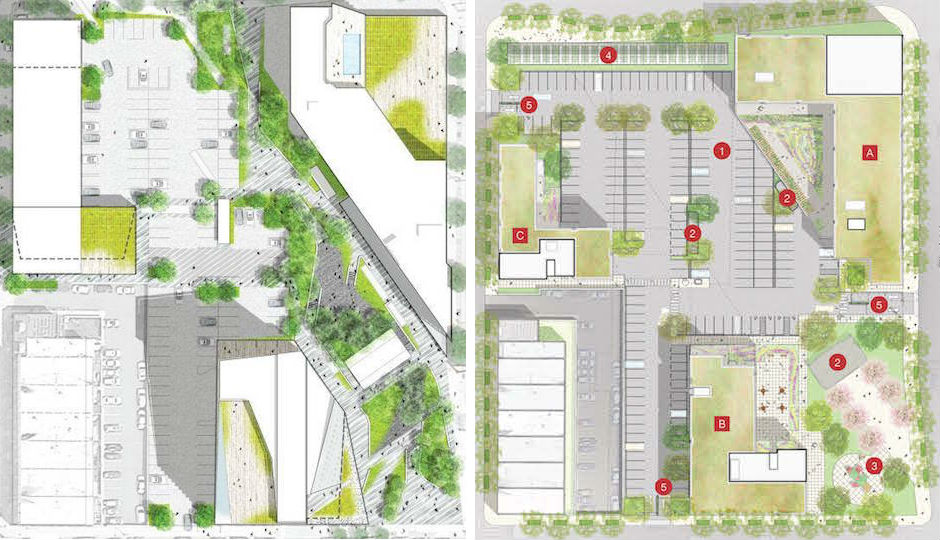 Two of Philly’s local development heavyweights, Pennrose Properties and Parkway Corporation, are duking it out for the right to develop a parcel of land the Philadelphia Redevelopment Authority owns on Chinatown’s eastern edge.

This past Monday evening, the developers made their cases for their projects at an informational meeting in Chinatown.

The site in question takes up three-quarters of the block bounded by 8th, 9th, Race and Vine streets. Ridge Avenue once split this block in two diagonally, and the Chinatown station on the Broad-Ridge Spur lies beneath it as a result. This, along with the Commuter Tunnel running north-south under the station, placed some constraints on what the developers could build on the site.

The two projects are similar in several respects, but there are some key differences.

For starters, both projects contain somewhere in the neighborhood of 60 affordable housing units for seniors and 125 to 160 market-rate units. Parkway’s proposal, developed in partnership with the Philadelphia Chinatown Development Corporation and senior-living facility operator Presby’s Inspired Life, has the smaller number of market-rate units: 125 condos ranging in size from one to three bedrooms, with sale prices ranging from $300,000 for a one-bedroom to $500,000 for a three-bedroom. Pennrose, whose proposal also involves several legal aid groups, hotel developer United Development and EZ-Park, would build 160 studio, one- and two-bedroom apartments that would rent for $1,500 to $2,200 per month. Both proposals also include street-level retail, with Parkway’s taking the form of a new supermarket.

And in keeping with the PRA’s requirement that the projects have a “social impact” component, both proposals have community-service or community-benefit elements. Pennrose’s is the Equal Justice Center, which would be a one-stop shop for legal services for low-income and other clients in need. The Parkway proposal, designed by Cecil Baker & Partners, includes an intergenerational playground and a 6,000-square-foot urban farm, whose produce would be sold at a one-third discount in the community supermarket included in the project.

Where they differ is in parking and density. Parkway’s proposal consists of three six-story buildings of uniform appearance with 181 parking spaces (and room for another 50) in the middle of the site. The three buildings of the WRT-designed Pennrose proposal would vary in height and appearance; the proposed 147-room hotel would be the lowest of the three, the building with the housing would rise 10 stories, and the Equal Justice Center would be 14 stories tall. There would also be fewer parking spaces — 143 — and more greenery, with a landscaped promenade occupying most of the Ridge Avenue right-of-way as well as a passageway leading from it to Spring Street.

A Plan Philly report on the meeting noted that Parkway’s proposal had less density and more parking at the request of the PCDC. But while representatives of that organization argued that the city should choose the Parkway proposal because of its participation in its planning, some community members favored the Pennrose project, arguing that convenient access to legal services would also benefit the surrounding community.

The PRA’s final decision will be based on design, financing, and the overall social impact the projects would have on the city.

The Two Proposals for 8th and Race Streets 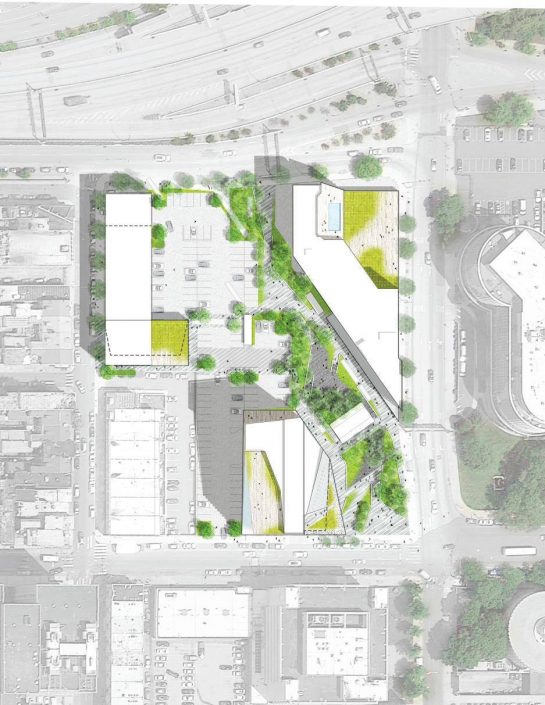 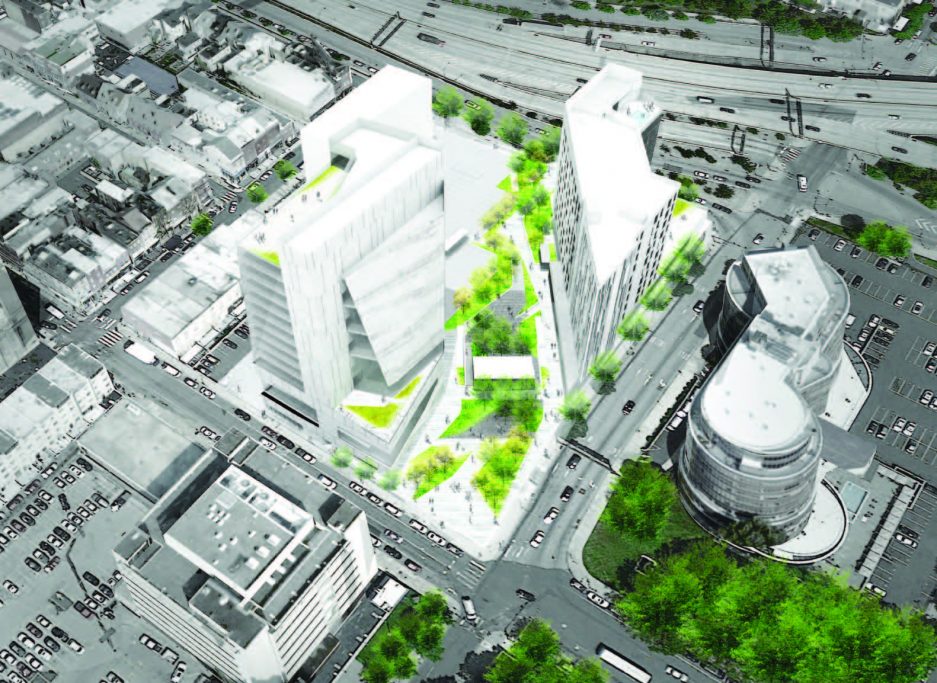 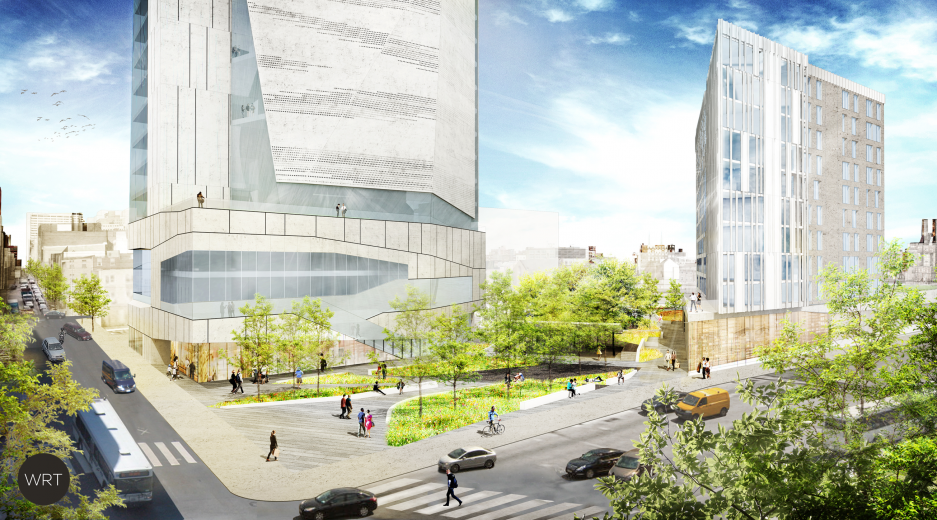 View of the Pennrose project from 8th and Race streets. 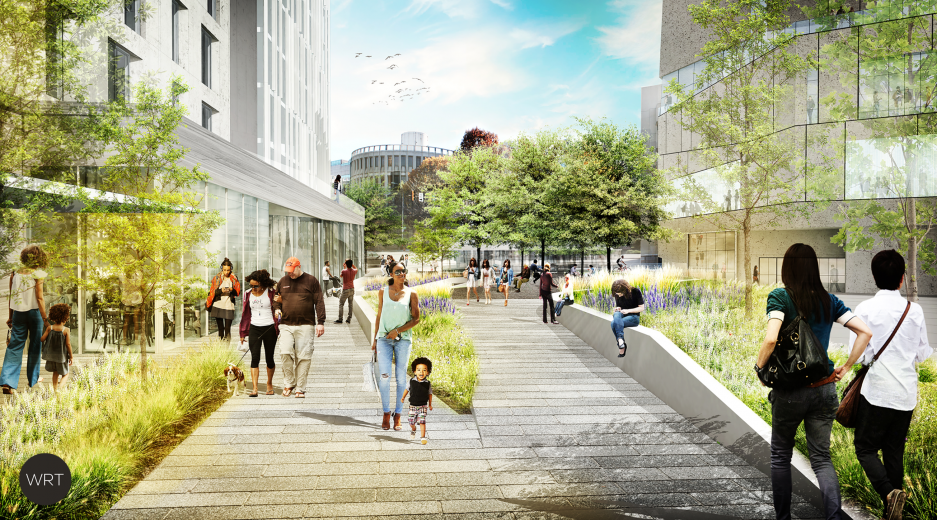 View of the Pennrose project looking east towards 8th Street from Spring Street. 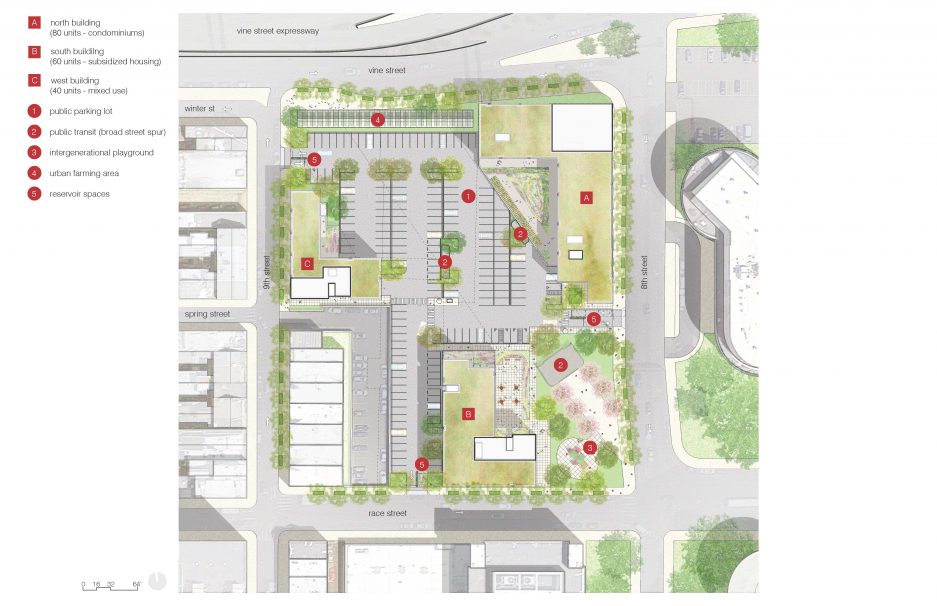 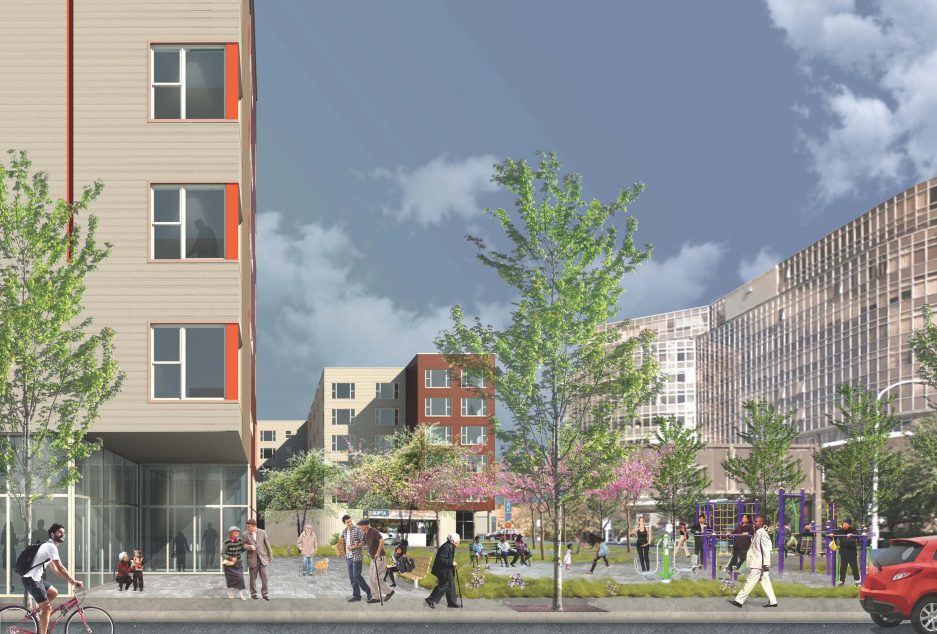 View of the Parkway project from Race Street at 8th. 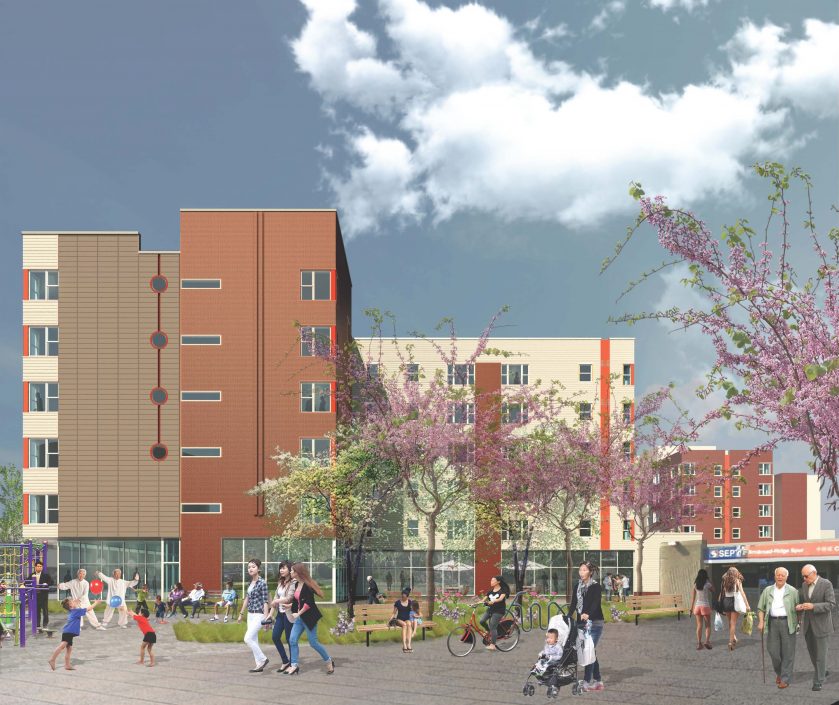 View of the Parkway project from 8th Street at Race.