Now that financing has been secured, National Real Estate Development is all ready to build the third piece of the East Market neighborhood. Any resemblance between it and a modernist landmark nearby is deliberate. 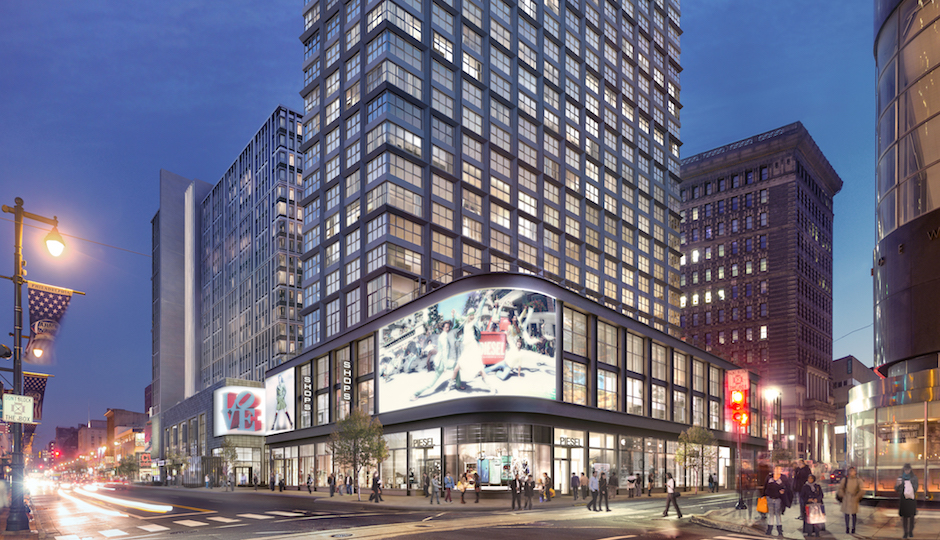 National Real Estate Development, LLC (NRED), the union-affiliated development firm that’s behind the East Market mixed-use development, yesterday announced that it had closed on a $57 million loan from Wells Fargo that will allow work to commence on the project’s second apartment tower.

Designed by architect Morris Adjmi in collaboration with project architect BLTa, the new tower is dramatically different in style from the first tower now under way at 11th and Market streets.

Yet it should strike a familiar chord with everyone who sees it.

“It absolutely takes its inspiration from PSFS, from the curved corners at 12th and Market to the gray color palette to the tall slender profile,” said Dan Killinger, NRED’s managing director of development.

Because this tower will anchor two corners — the 12th and Market corner and the one with the interior pedestrian path between the two towers that will connect Market and Ludlow streets to start — this tower’s base has two curves. One of the corners will be occupied by the first city location for Iron Hill Brewery & Restaurant, the region’s largest chain of craft brewpubs. Killinger said that as of now, there are no other tenants to announce, but “we’ve identified a few other tenants that we’ll be excited to announce” once they’ve signed on the dotted line.

Killinger expressed no worries that this project would suffer as what appears to be a looming glut of apartments is coming down the pipeline. “What we’re trying to make is a new neighborhood, and a critical mass of residential is necessary to make the retail component vibrant and drive the street life in the area.”

Which doesn’t mean NRED didn’t explore other options before settling on apartments: Killinger said that the company had also studied office and hotel uses for the tower but decided that their first impulse remained the right one and that “residential would be the way to go now.” 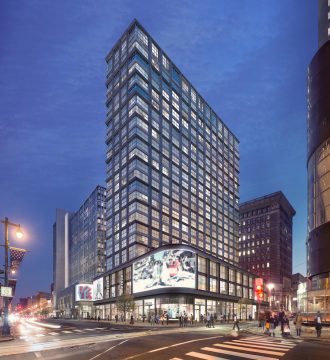 The tower in its full glory.

For this tower, NRED has assembled the same team that put together 1100 Ludlow, the conversion of the former Family Court/Municipal Court building — originally the men’s store for Snellenburg’s and later the first home of the Community College of Philadelphia — into offices with street-level retail. There’s also a family resemblance between this new tower and the more industrial-chic design of both 1100 and the new Roland Kassis hotel project in Fishtown that Adjmi is also working on.

As with 1100, Clemens Construction Company will serve as general contractor on the project. “We’ve been impressed with Clemens’ work on 1100, and although a number of contractors bid on the project, we were comfortable with Clemens,” Killinger said.

When asked whether reports of problems that arose during contractor Tutor Perini’s work on the 1100 Market tower influenced the decision, Killinger issued a categorical denial. “All of our contractors have been very professional in handling the issues that arise during the construction process,” he said.

Wells Fargo also made sense for financing this phase of the development, he said, as they had already backed the project’s earlier phases.

Of the design of the second tower, Killinger said, “Morris really gets it. He understood the site well, he loved the inspiration of the PSFS building, and we love working with him as we do with BLTa.”