Out on the far edge of Montco lies the birthplace of a Civil War hero who later served as Governor of Pennsylvania. It's yours for the asking. Chances are, when you take a look at the photos of this modest but sturdy-looking stone home out where suburban Philadelphia fades into suburban Reading, you will think, “Okay, so how much will it cost for me to fix this place up?”

If you’re a history buff, you should relish the prospect, for this home is a living link to Pennsylvania history.

The structure you see above dates to 1773 and was originally built as a parsonage and church farm. In 1830, it was the birthplace of Gen. John F. Hartranft, who spent the first 14 years of his life in this home before his parents moved to Norristown. A real estate agent, lawyer, and officer in the Pennsylvania state militia, Hartranft enlisted for service to the Union the moment he heard of President Abraham Lincoln’s call for troops to put down the rebellion that started when South Carolina troops fired on Fort Sumter on April 12, 1861.

Hatranft’s own troops left him when their 90-day tour of duty expired on the day of the First Battle of Manssas (Bull Run), but he immediately volunteered his own services to his brigade commander, Gen. William B. Franklin. His bravery in rallying disorganized Union troops that day earned him a Congressional Medal of Honor in 1886. But before receiving the nation’s highest military honor, he served two terms as Governor of Pennsylvania immediately after the end of the Civil War. (It’s because of this that the street in South Philadelphia, one of a series of streets named for Pennsylvania governors, bears his name.)

But enough about its most famous occupant. (If you want to learn more about him, go here, or here.) Back to the house.

It’s got very strong bones: original wide-plank hardwood floors, 30-inch-thick walls, and a massive wood-burning stone fireplace in the living room. The home also features hand-painted decorations done in the German Baroque style. There’s also a wood-burning stove in one of the larger second-floor bedrooms. The home also sits on a four-acre lot that offers lots of room for entertaining, relaxation and gardening.

As we said, this home could use some updating. The kitchen was remodeled in the 1960s with board and batten cabinets and a propane stove, and one of the two third-floor bedrooms is a walk-through (there may not be much you could do about that). But take a look at the pictures below. You should see that in the right hands, this home’s history could come alive again, and its very affordable sale price should leave you with plenty of money to effect the revival.

OTHER STUFF: The state historical marker commemorating Hartranft is nearby, on Sanatoga Road at Cross Road. 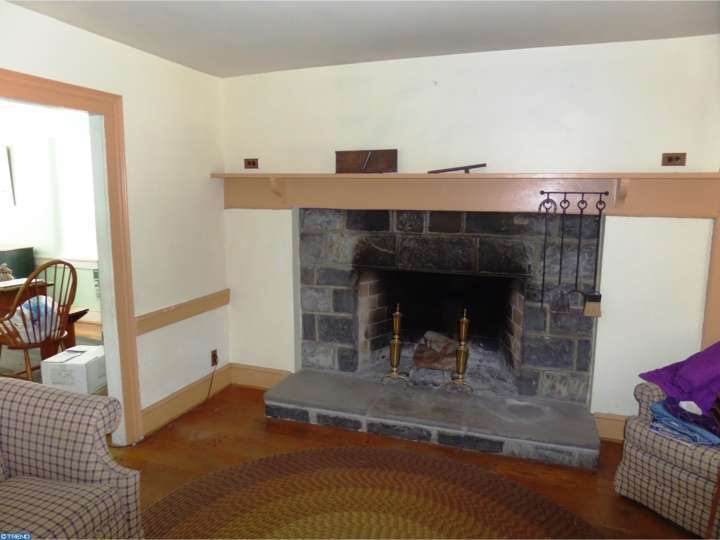 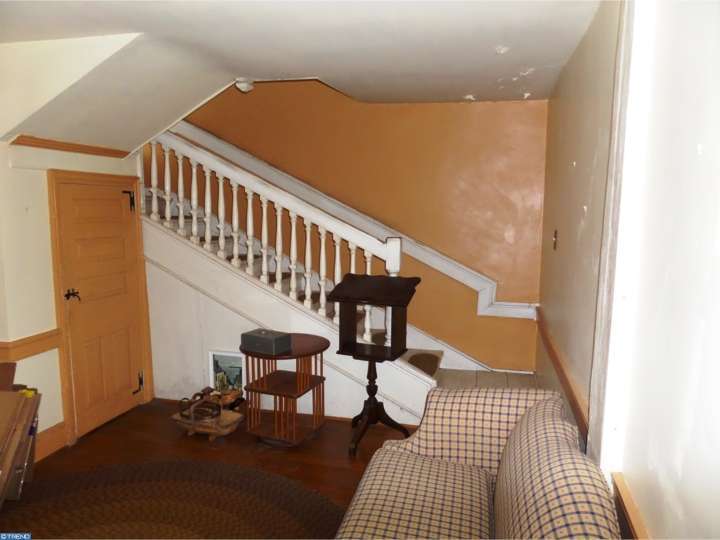 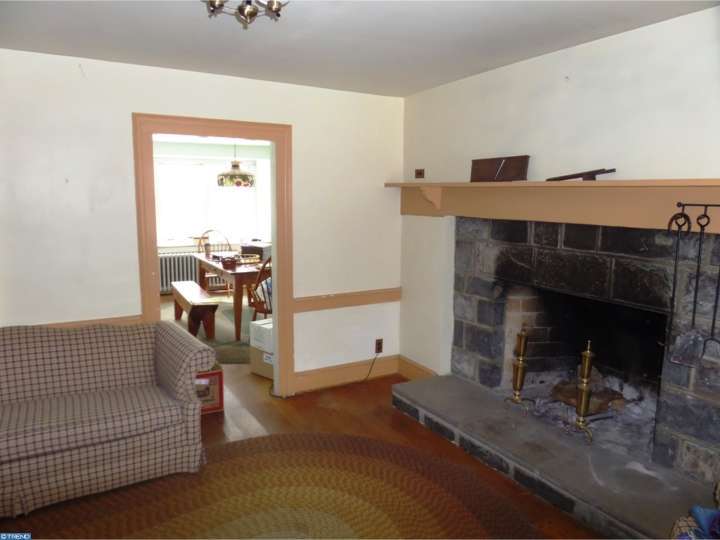 Living room and door to kitchen 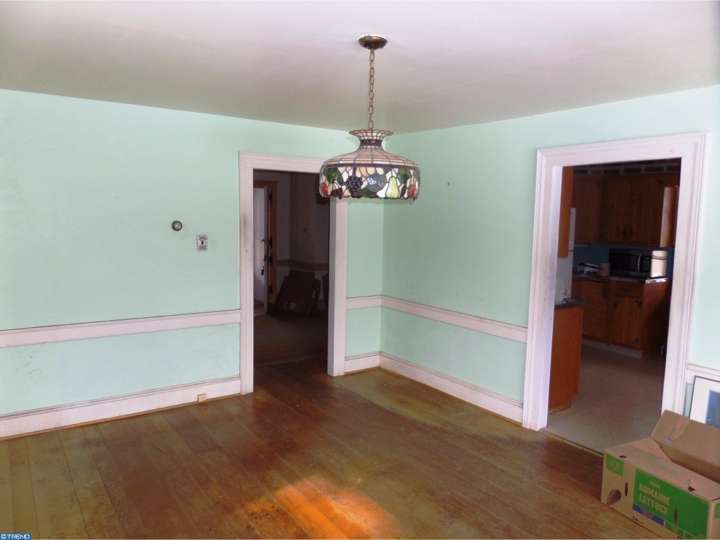 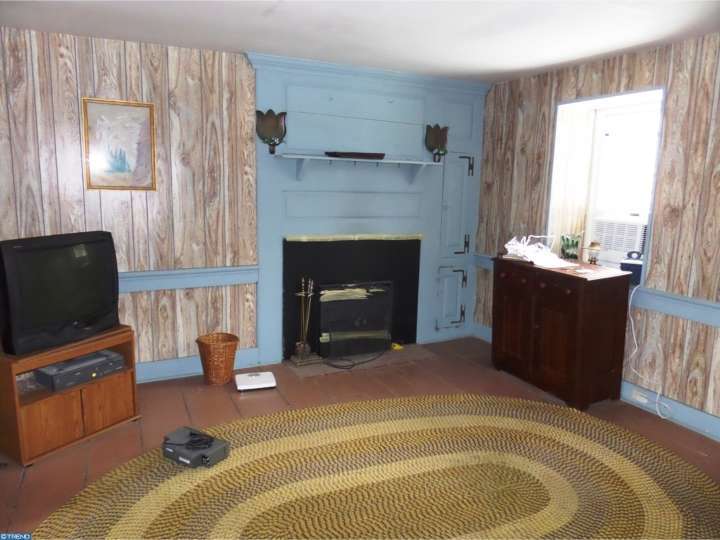 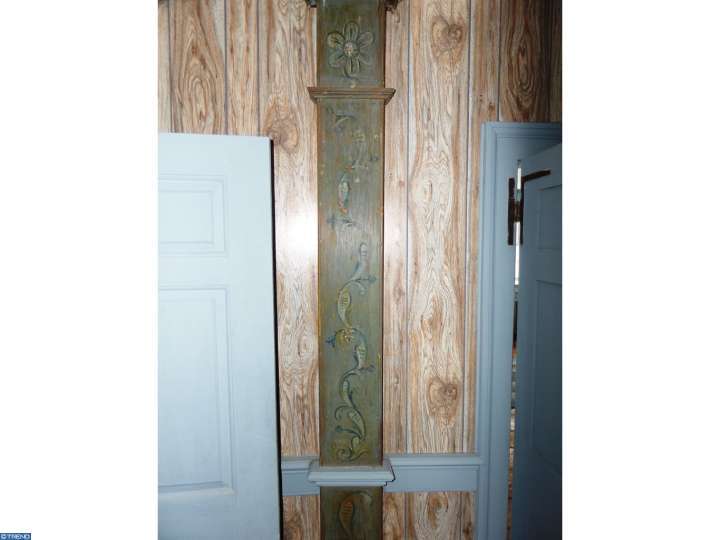 Detailing on column in bedroom 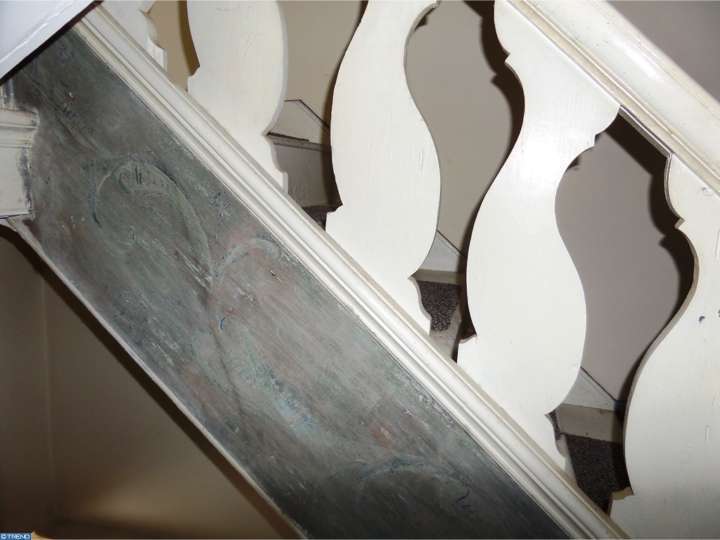 Detailing on stairs to third floor 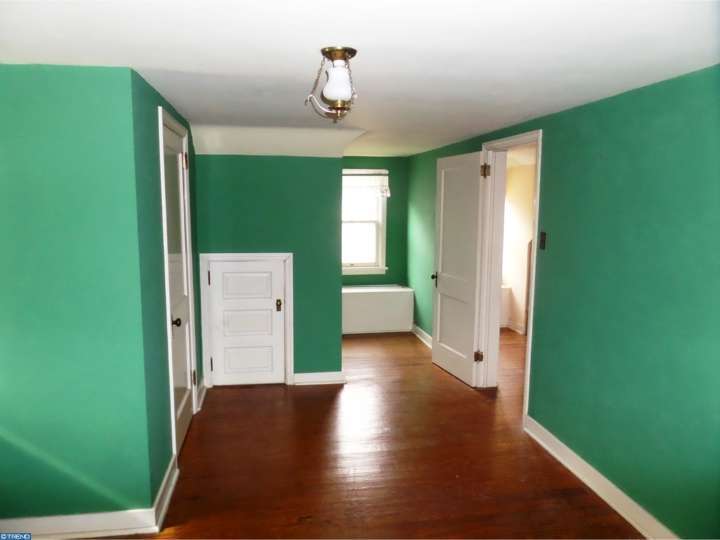 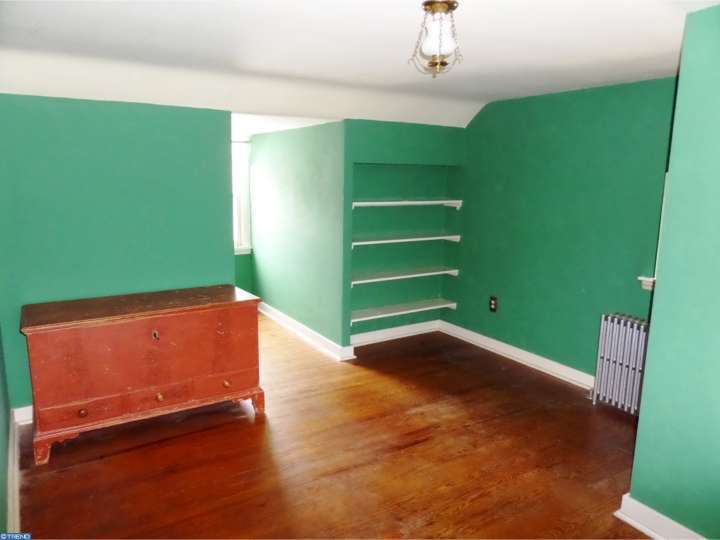 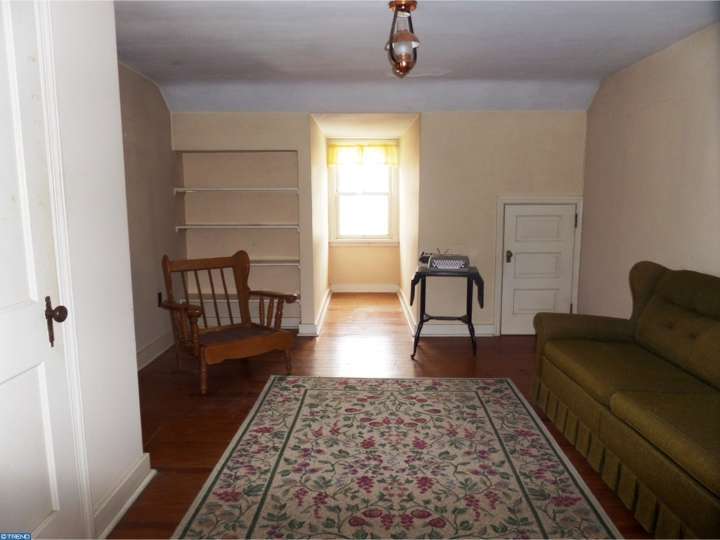 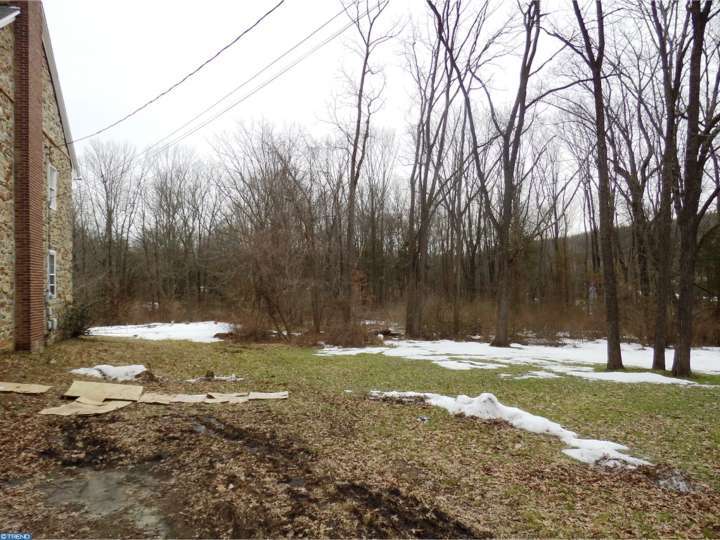 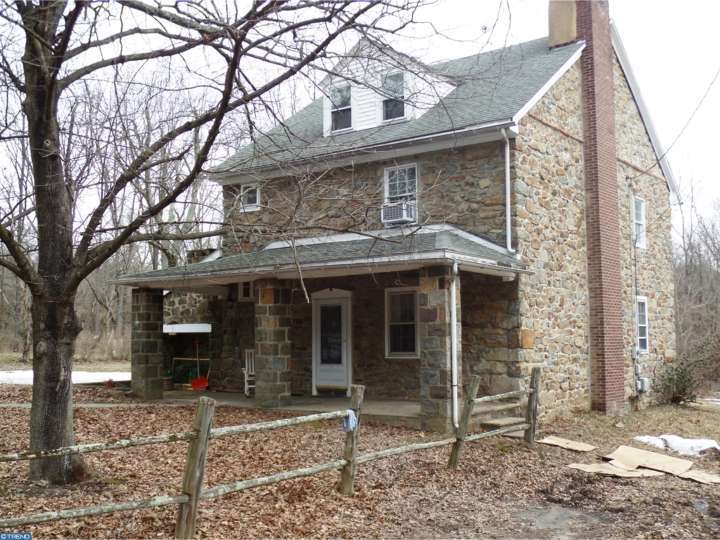 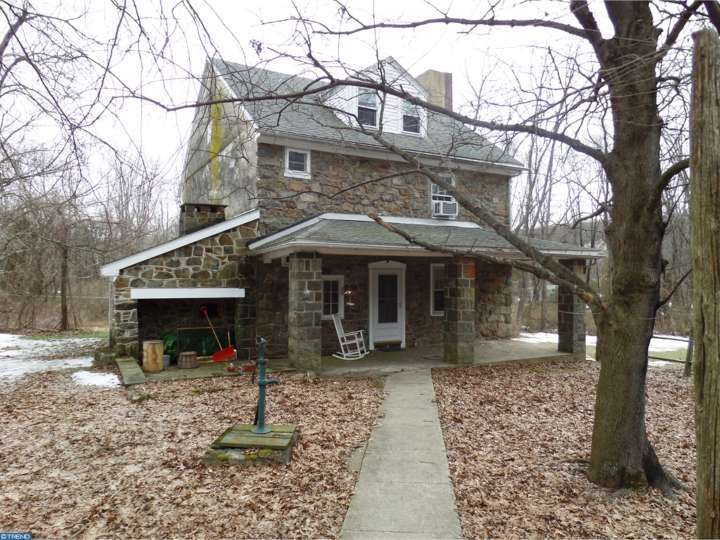 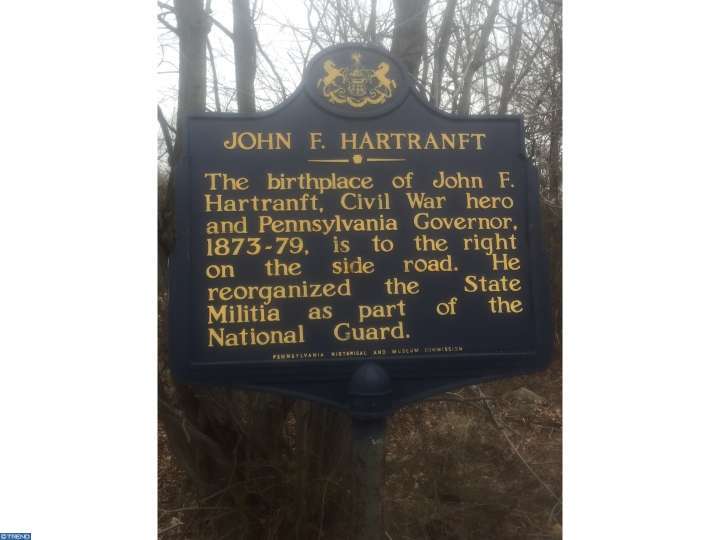