The Piazza Gets New Name, Adds Co-Working to the Mix

WeWork's opening in the last surviving remnant of the old Schmidt's brewery expands the work options at the live/work/play development, which is also getting an image makeover to go along with the physical ones taking place. WeWork has taken 30,000 square feet of space in the last surviving remnant of the old Schmidt’s brewery. It’s the office linchpin of the makeover now under way at The Schmidt’s Commons. | Photos: Courtesy WeWork/Max Hoagland

Small entrepreneurs and startup companies in Philly now have another option when it comes to flexible co-working office space.

This one comes with beer. And stadium seating. And a host of support services. And a community of other entrepreneurs ready to share their experiences and tips with you virtually as well as physically.

All of this can be found at the new Philly location of WeWork, the newest addition to the mix of offices, shops and restaurants at the Piazza at Schmidt’s.

Make that the former Piazza at Schmidt’s. Along with the opening of the co-working facility today comes a complete rebranding of the apartment/retail/office complex on North 2nd Street in Northern Liberties.

From this point forward, the development will be known as The Schmidt’s Commons, and there are more changes for the complex in the works.

But let’s start with the opening of WeWork in the last surviving building from the old Schmidt’s brewery that once occupied the land from this point north to Girard Avenue.

That “stack of value” includes more than the usual perks that come with co-working space, such as conference rooms and all the coffee and Coke you can drink. (The coffee, by the way, is La Colombe, which WeWork serves exclusively in all its facilities.) It also includes the ability to book workspace or a conference room in any of WeWork’s 90 locations in 28 cities worldwide. It includes access to fringe benefits such as health insurance, back-office functions including accounting services, tech-y stuff like web hosting, and a passel of other perks like gym memberships and travel services, all at discounted rates usually available only to larger firms.

And it includes instant access to a community of some 50,000 WeWork members who can answer questions about business issues, help other members fill openings and more via a mobile bulletin board app.

In the Philadelphia facility, it also includes facilities where members and neighbors can meet, mingle and host events. Two spaces unique to this location are an amphitheater with stadium seating and a pull-down screen that can be used for forums, screenings and other similar events, and a pub space with a fully-equipped catering kitchen, beer taps and a game room. McLaughlin said that WeWork will make both of these spaces available to the general community as well as members. “We generally don’t charge for use of the community space,” he added.

The community spaces are tucked into and around the facility’s most architecturally distinctive feature: a two-story-high space formed around the railroad spur that used to enter the building. The track is gone, but the old platform serves as a balcony; the construction crew dug an extra four feet down to create the lower-level space.

McLaughlin said that WeWork particularly appeals to people “who want to plug into a certain idea of community” in order to help their business grow. (If that sounds like you, you can get more information about how to become a member at the WeWork website. McLaughlin also pointed out that WeWork offers monthly memberships and does not require members to commit to leasing space for a fixed period of time. While half the available desk space in the Northern Liberties WeWork was already spoken for as of opening day, that leaves half for new members. There are currently 40 member firms located here.)

WeWork is merely the largest of the changes taking place today aside from the renaming itself. A new menu of programming that includes more family-oriented activities has been developed for the interior courtyard, which will keep the Piazza designation.

Ongoing events include yoga classes, a monthly “Silent Philly/Family Fun Day,” and the Piazza tradition of showing all local sports teams’ games and other special athletic events on the Jumbotron screen at the courtyard’s south end. Recurring events include movie nights, food truck lunch days, and a series of changing dances with lessons. The Piazza also has a new director of events programming, Krystal Souvanlasy.

The entire complex of 25 buildings, which includes the Liberties Walk development that stretches west from 2nd Street opposite the Piazza as well as office buildings, a shopping center and other commercial properties stretching north to Girard Avenue, was acquired by The Kushner Companies in 2013. (Kushner Companies CEO Jared Kushner also owns Observer Media and is married to Ivanka Trump, Donald’s daughter.)

Sean Gavin, The Kushner Companies’ community manager for The Schmidt’s Commons, said that other changes will be coming to the Piazza area soon. Wahlburgers, Mark Wahlberg’s gourmet burger chain, will set up shop in the ground-floor office building space that had housed Darling’s Diner from the Piazza’s completion in 2009 until last spring, and the space that most recently housed the King’s Oak restaurant will soon be the spot where brewing returns to the old Schmidt’s site in the form of a brewpub operated by the owners of the Landmark Americana chain of restaurants.

Tom Revelli, director of marketing for Landmark Americana, said the new brewpub will differ from the chain’s four existing locations. Besides serving fresh-brewed beer, the menu will include more New American fare.

Gavin said that the retooling of the Piazza is designed to make the place more welcoming to the community. “There will be more free stuff, more community-oriented programming, and modular furniture coming to the courtyard” much like the furnishings that have made Spruce Street Harbor Park a summer hit. The new decor, he said, will “bring back some vibrancy as well.”

As for how the complex is doing financially, Gavin said that the 500 apartment units are 97 percent rented. Most tenants fall in the 18- to 35-year-old age group, but he added that the tenants span the age spectrum.

He also touted a more cooperative relationship with the local civic organization, the Northern Liberties Neighbors Association. “We work closely with our residents and the NLNA” to address concerns, he said, adding that the NLNA also wants the complex to succeed as a community asset.

NLNA President Matt Ruben backed him up in a statement released by the company. “The name ‘Schmidt’s Commons’ captures the real potential this space always had to be a gathering place and activity hub for people in the neighborhood and from around the city,” he said. “We’re very glad the property’s management sees this potential. They’ve been very willing to work with us to ensure The Schmidt’s Commons fulfills that potential moving forward.”

The management will continue to refine the mix of commercial tenants as leases expire, Gavin said. “We’re looking for tenants who will contribute to the innovation that’s taking place here.” 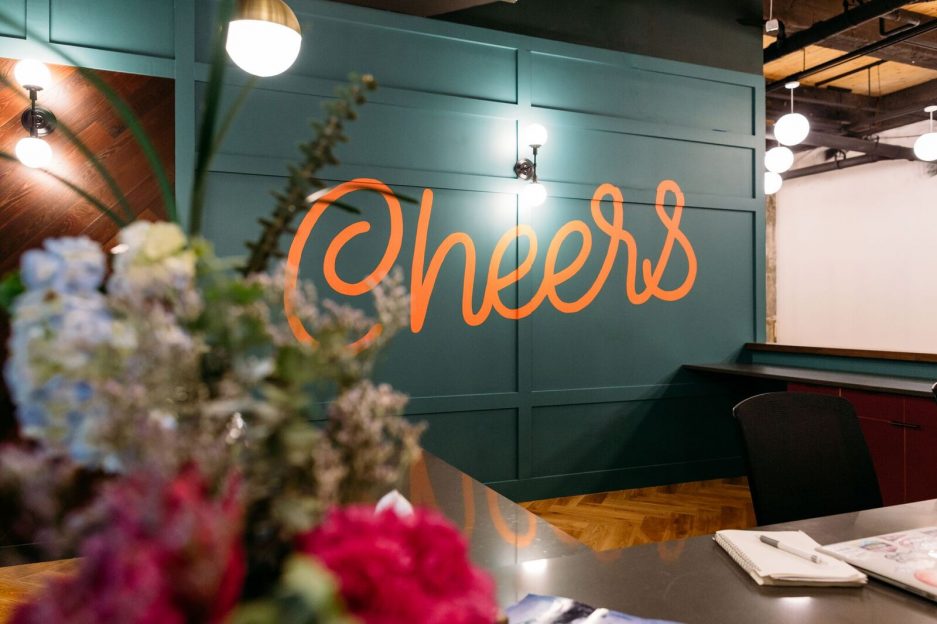 The reception desk at WeWork. 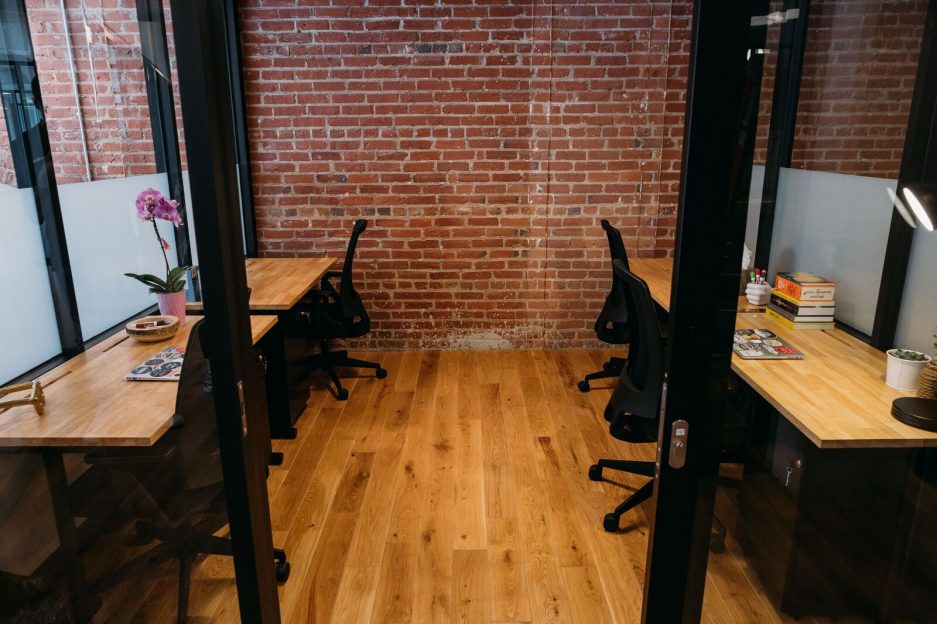 Members can sign up for "hot desks" shared with other members... 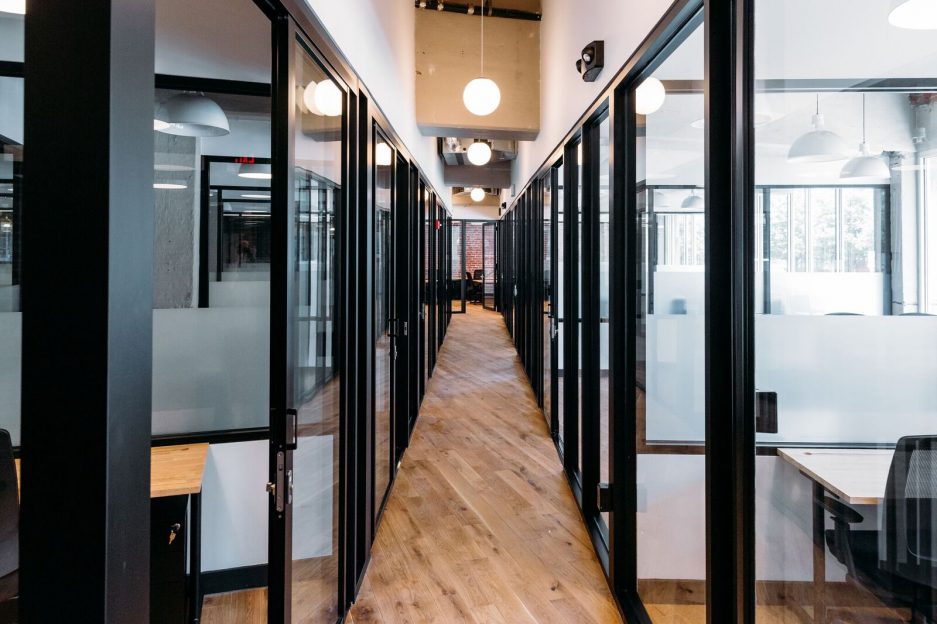 ...or reserve their own private office space. 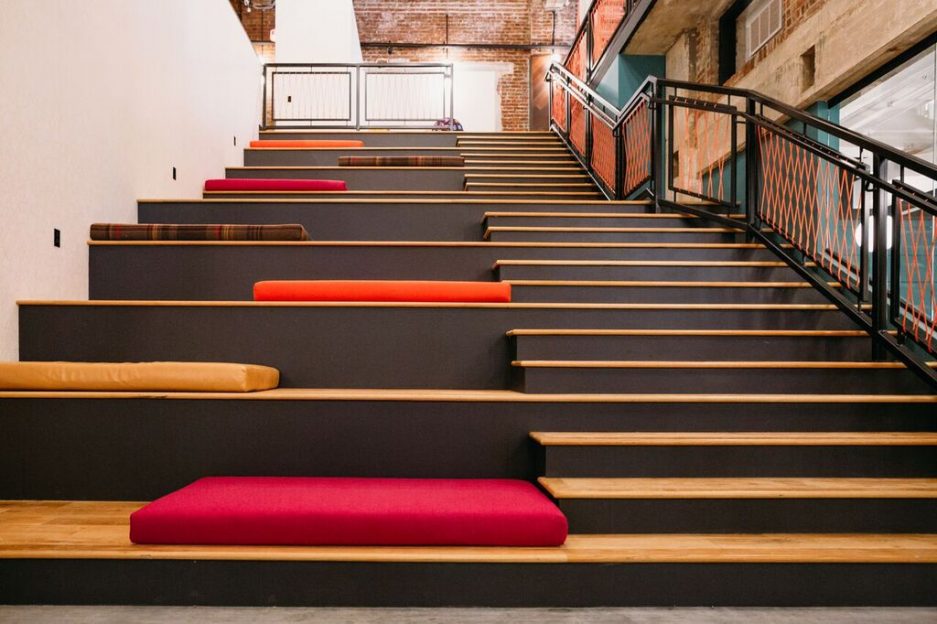 The terrace connecting the main floor and lower level is two spaces unique to the Northern Liberties facility. Both are available for community events. 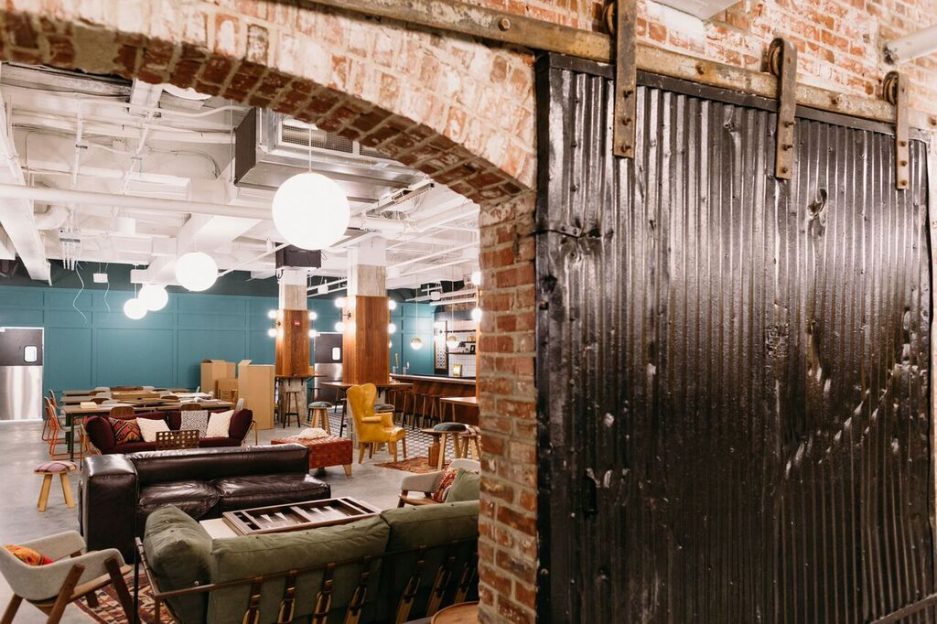 The other distinctive space is the pub and game room. The facility incorporates many elements from the building's former role as a brewery, such as this sliding steel door. 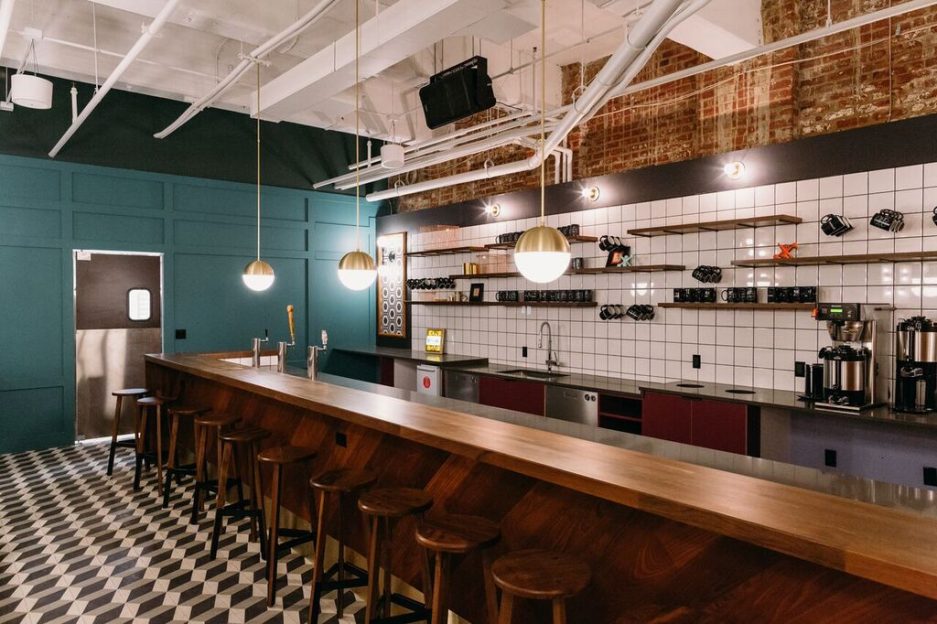 The pub space has a full catering kitchen as well as a bar with keg coolers... 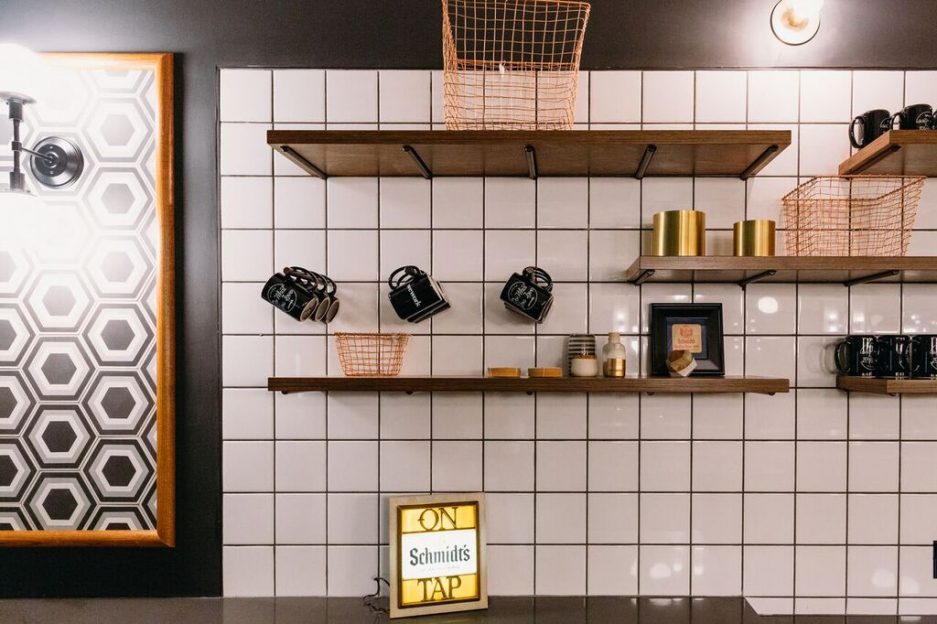 ...so naturally, there's a nod to its history behind it. 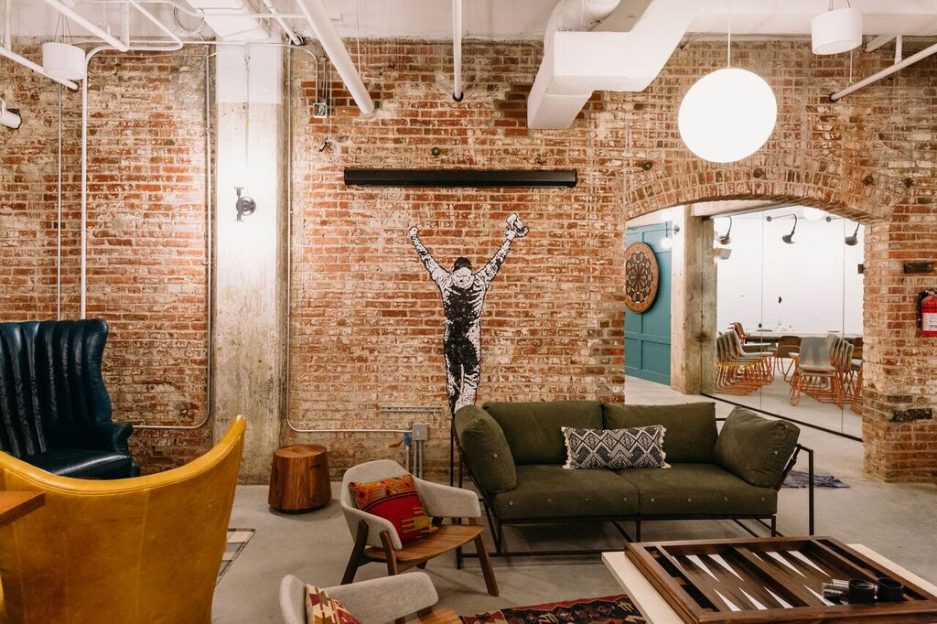 The pub space has lounge chairs and board games as well, and there's a game room through the archway. 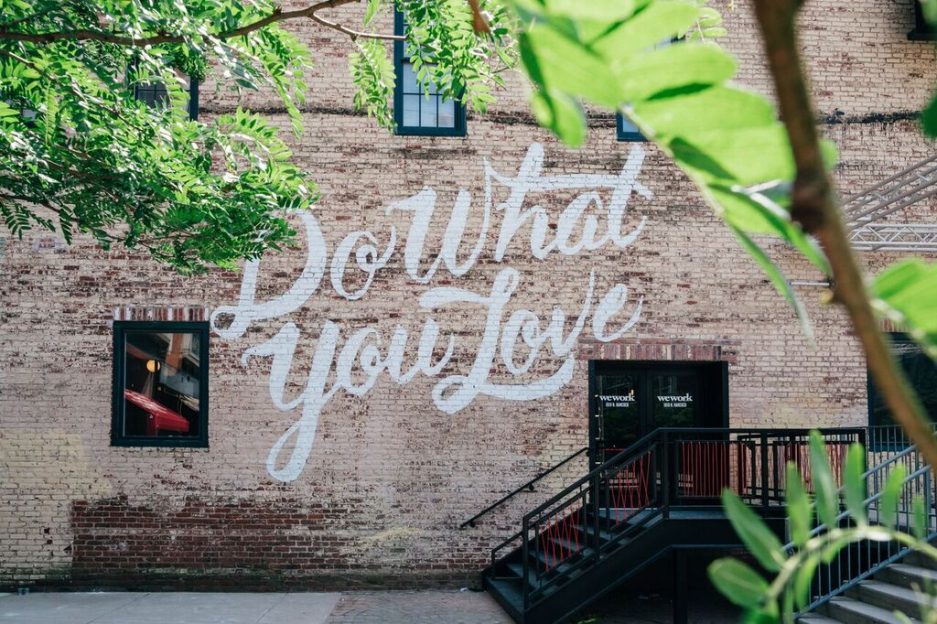 Sound advice added to the entrance: an unofficial motto for WeWork. 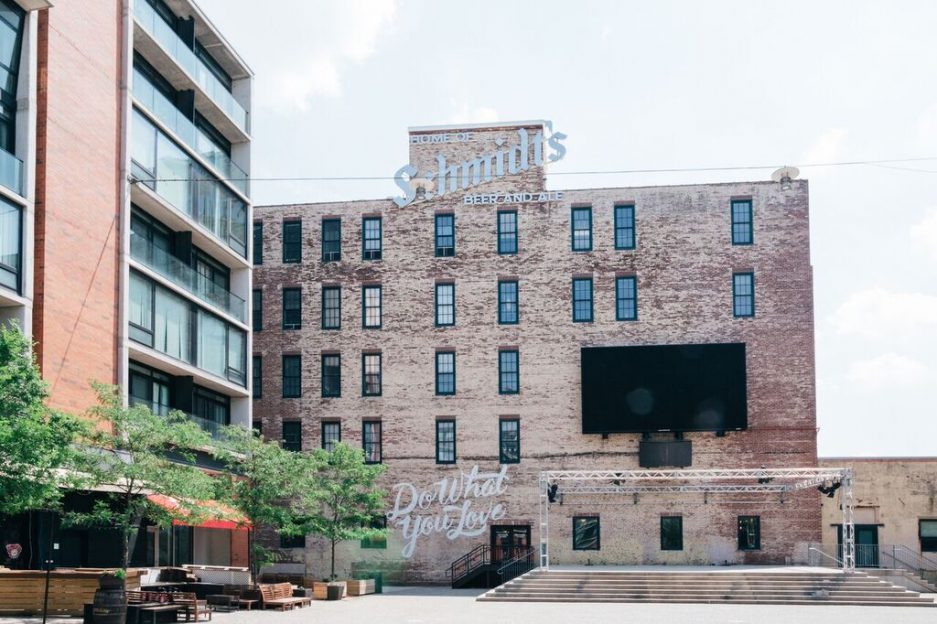 Members can also use the outdoor space for events and functions, or just go out and catch the Phillies, Eagles, Flyers or Sixers on the Jumbotron.