Dranoff Celebrates Topping-Off of One Riverside

One floor of this tower in a park was turned into a park in a tower to mark the occasion. The beam guests signed at the ceremony may be purely symbolic, as One Riverside’s frame is largely concrete, but it symbolizes years of planning and construction as well as the completion of last piece in the transformation of the Schuylkill’s east bank from dump to jewel. | Photos: Sandy Smith

As joggers, dog owners, bicyclists, kids and their parents enjoyed the balmy weather down at street level in Schuylkill River Park yesterday evening (May 25), eight floors up, invited guests, local politicians and some very happy future residents basked in the temporary air conditioning as they joined developer Carl Dranoff and architect Cecil Baker at a “park in the sky” for the ceremonial topping-off of Dranoff’s One Riverside apartment tower.

Guests signed a ceremonial beam on their way to the construction lifts and mingled to the music of the Philadelphia String Quartet before and after Dranoff, Baker and the electeds spoke.

In his remarks to the assembled guests, Dranoff showered praise on all the parties involved in bringing the project to fruition. “It took hard work and three years of planning and construction under pretty intense conditions to transform our vision from blueprints into a stunning addition to our skyline.”

The 22-story tower has been a year in the building and reflects two years’ and many meetings’ worth of suggestions from the building’s near neighbors. “We had over a dozen meetings with different community groups,” Dranoff said. “Not everyone was aligned” on their concerns. “The park people wanted us to pull the building back from the park and put less glass, less reflectivity” on the side facing it to reduce the possibility that refraction of the sun’s rays would cook the plants in the community garden directly below its south facade. “Others wanted view corridors. Some of our neighbors wanted to make sure that our garage was fully sunken below ground so we didn’t have any walls facing the street.

“We were able to accommodate everyone with nips and tucks here and there. We started out with a narrow building, but we made it narrower and taller and with fewer protrusions on the street line. We shifted the building 11 feet north.” The changes didn’t come cheap, especially digging deeper to fully bury the garage: “Sinking the garage meant we had to build a giant bathtub” to keep water from the river next door from seeping into the building’s underground levels. In his remarks to the audience, City Council member Kenyatta Johnson (D-2nd District) acknowledged that “he might have gone a little over budget on the parking” but praised Dranoff for going the extra mile to produce a building that not only fulfilled his desires but met the concerns of the neighborhoods. “He had the opportunity to build on this site by right,” he said. “But he engaged the community on this project. He made sure that this great garden next to the building would be protected and not negatively impacted by the site.” Johnson also invited at-large Council members Derek Green (D) and Al Taubenberger (R), who were also present at the ceremony, to join him at the podium in order to emphasize the “team effort” on Council’s part in support of the development. Dranoff in turn thanked Johnson for facilitating those community meetings.

One Riverside marks the first time Dranoff and Baker worked together. “He’s been building some of the most elegant buildings in the city for 30 years, and the site needed a special touch,” Dranoff said. “It’s a one-of-a-kind site, and it needed a master craftsman to figure out the angles and materials that would best leverage the attributes and potential of the site.” After interviewing and reviewing the work of several architects, he said, Baker’s slender towers struck him as the ideal solution for the small but prominent plot: “They spoke to me.” Baker told the audience that the path to realization began with a back-of-the-napkin sketch Dranoff had of his vision. He then went on to praise Dranoff for working with him to create a building that enhanced rather than dominated its surroundings. “Most developers, when they come on an asset like a river view, want their building to hog the view,” he said. Dranoff, however, was receptive to Baker’s desire to “fracture” the building in order to preserve view corridors for those living around it, a move he called “an act of generosity” on the part of the developer.

In his remarks to the guests, Dranoff also placed One Riverside in the context of a nearly 30-year transformation of the Schuylkill riverfront in which he played a pivotal role. He noted that when he purchased his first property along the river in the early 1980s, the area was “an eyesore, with dilapidated factory buildings, a polluted waterway and a largely unkempt waterfront which was commonly known as ‘Needle Park.'” (A near neighbor who attended the ceremony noted that it was also a popular gay hangout known to that community as “Judy Garland Park.”) His first project in this area was Locust Point, a conversion of a former factory into loft condominiums. That building, completed in 1986, demonstrated there was a market for riverside living along the Schuylkill. Twelve years later, after a string of other successful residential conversions, a recession-driven setback in his business and his return to the field with new buildings such as Symphony House, he returned to the Schuylkill riverbank with Locust on the Park, which converted the former National Publishing Company into luxury condominiums.

“People asked me why I called it ‘Locust on the Park’ when there wasn’t a park there?” he said. He went on to explain that he knew there would be one there, namely, Schuylkill Banks, which was on the drawing boards at the time. The successful extension of the Fairmount Park bike and pedestrian paths into Center City provided the additional green context into which this tower has been inserted.

One Riverside also improves the riverbank by serving as a new focal point for one of the city’s most popular views: the one from the South Street Bridge. That view had for years been dominated by the billboard atop the National Publishing Company building. With One Riverside taking the billboard’s place, the sign has now been removed.

Mayor Jim Kenney’s remarks underscored a point Dranoff made about the role public amenities like Schuylkill Banks play in stimulating new private development. He also issued a defense of the 10-year tax abatement for new residential construction and improvements. “It’s not going anywhere,” he said. “I will bet that when this is fully occupied, in one year, the additional taxes paid by the people in this building will overwhelm the tax abatement this building received.”

The building will be ready for move-in around the end of the year. Dranoff said that sales have exceeded expectations, with 60 percent of the units already sold; some buyers are temporarily living in units in Locust on the Park while they await completion of their new residences.

One Riverside Topping Off Celebration 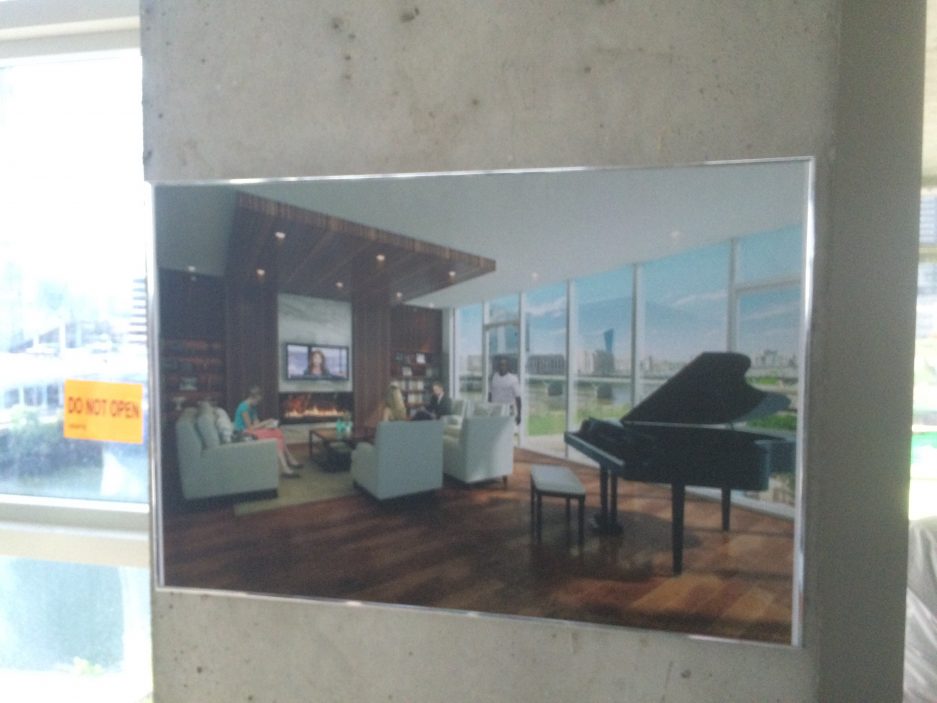 A rendering of the lounge on the building's amenity floor. 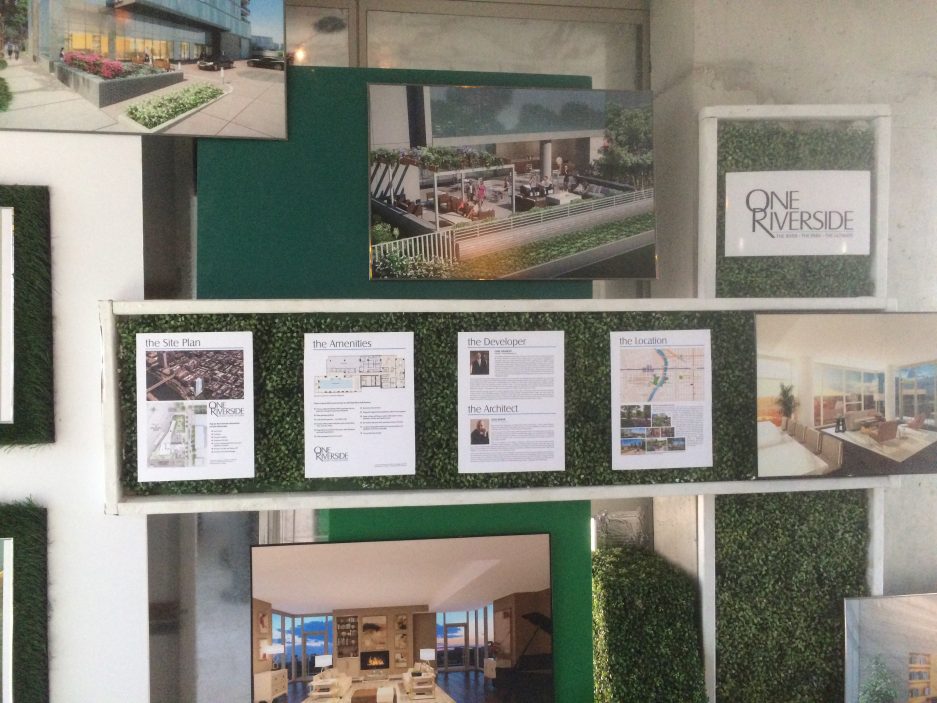 A display at the event described the people involved in the project. 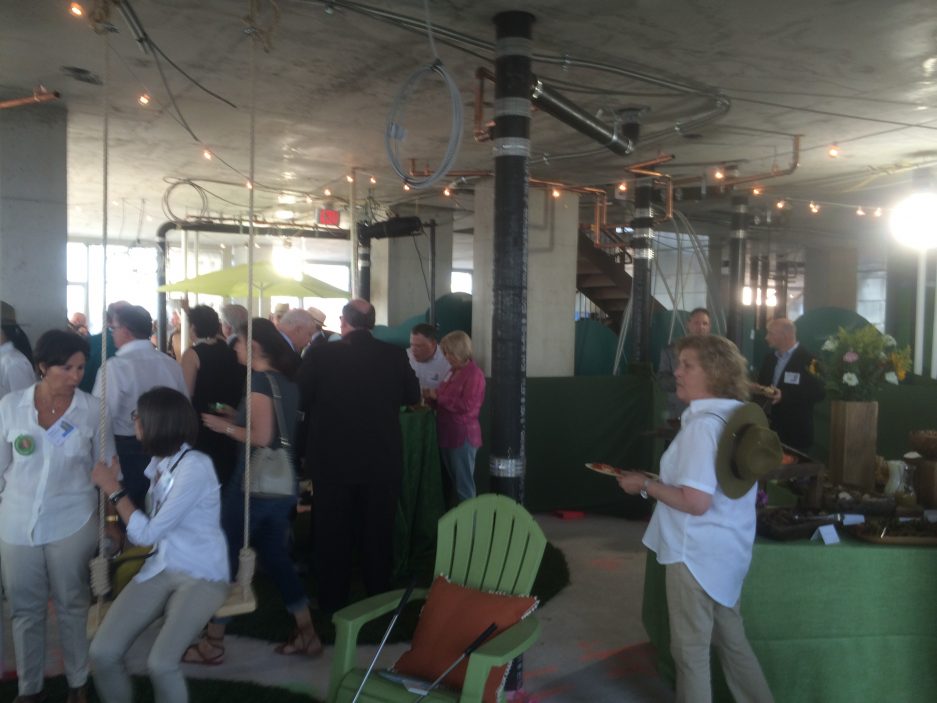 The guests at the ceremony and reception 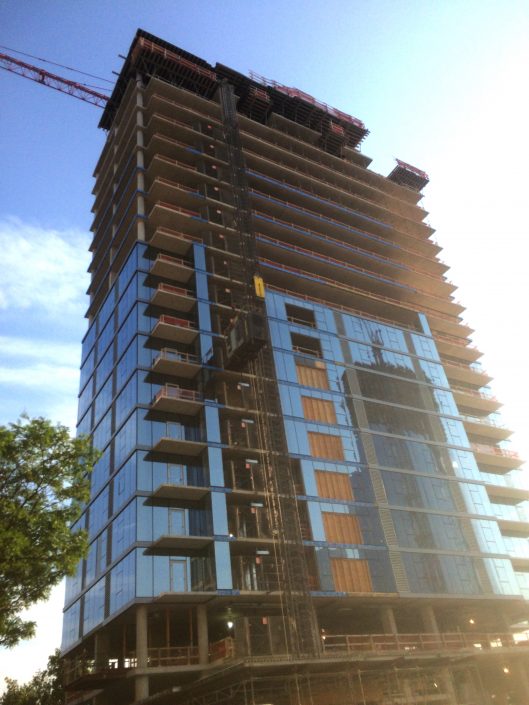 The building's north and east facades are all glass and will reflect the river and their surroundings... 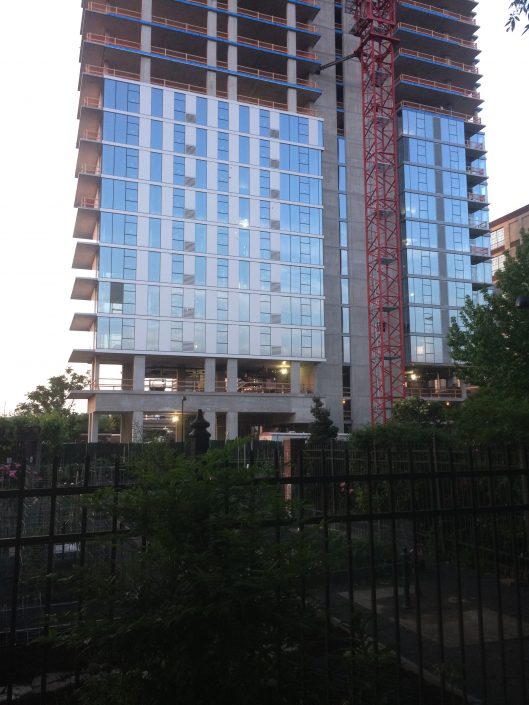 ...while the south facade incorporates metal panels to reduce reflectivity and protect the garden at its base. 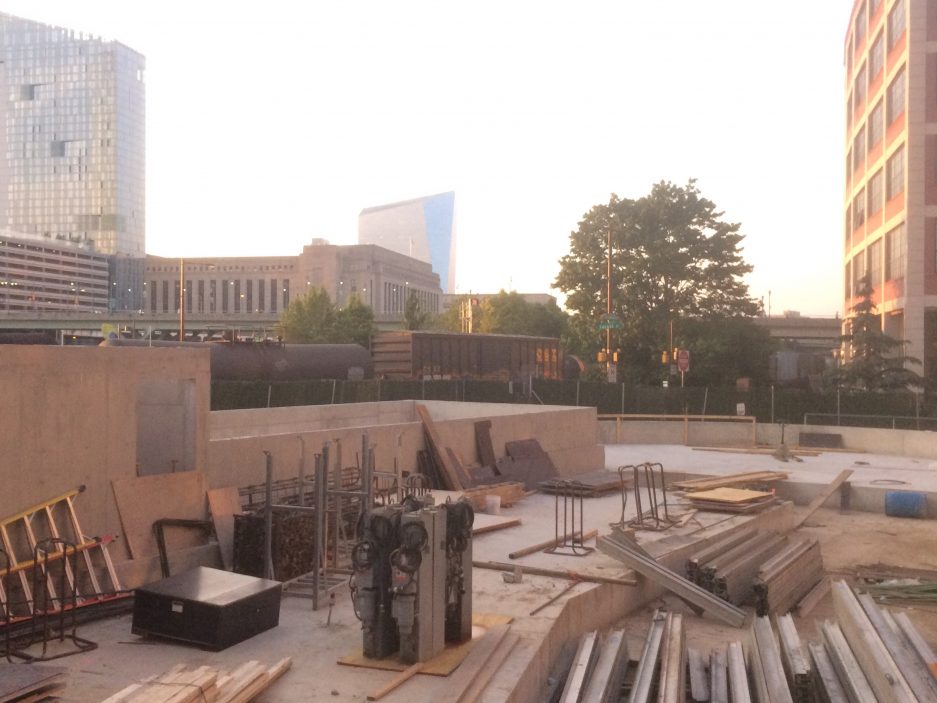 A private park for building residents will surround the garage entrance at the rear of this photo.