Working with a local architect, Carver students recast the CITC into a mixed-use tower that you can actually walk through. What happens when you turn a bunch of bright high school students with an interest in architecture loose on the tallest building in Philadelphia?

You get some creative answers to questions the building’s original designers probably never even asked. You get active engagement with professional architects who serve as mentors to the students. And ultimately, you get a trip to the White House as part of a national STEM mentoring competition.

For the acronymophobic, “STEM” stands for Science, Technology, Engineering and Mathematics, four fields where educators are working to improve the performance of American students. One way they’re doing that is through programs like the ACE Mentor Program—yes, another acronym: this one stands for Architecture, Construction and Engineering. Founded in 2000, the program pairs professionals in those industries with teams of students in 20 city and five suburban high schools, with four more high schools slated to be added this year.

This past year, one of those teams—ACE Team 6, comprised of students at George Washington Carver High School of Engineering and Science in North Philly, mentored by professionals from KSS Architects, Gilbane, Keast & Hood and Schrader Group—was chosen as one of six finalists for the first US2020 STEM Mentoring Awards for their “Comcast Tower II (Re-imagined)” project.

“We pose a different question each year to our students,” said Christina Marconi, a project architect at KSS and last year’s Team 6 team leader. “We led the kids through what was actually happening, then we said, ‘Forget all about it. If you had a blank slate, what would you do? What would be in this building?'”

This, of course, led to other questions. “They analyzed the site, then asked, What is the budget? Who is the client? What would go into the project?”

In a series of hands-on workshops over the course of six months, Marconi, her co-mentors and her students tackled the various problems posed by the questions. They acquired structural engineering knowledge by building models using Popsicle sticks and marshmallows and architectual modeling experience by constructing their own 3-D models of the plans they hashed out by consensus. Those plans both mirrored and departed from the composition and program of the actual building. Both had office, commercial and residential space, but in the students’ version, commercial space (heavy on the entertainment options) played a more prominent role, while the hotel was transformed into student housing. “Students being students, and thinking about college on the horizon, they thought, ‘Wouldn’t it be great to live in a building like this?'” Marconi said.

The most dramatic departure in the students’ design, however, came at the ground level. “What they latched onto was that this site was an important point in a busy urban context,” she said. “There’s a lot of pedestrian traffic in the area, and it would be good to include a diagonal path through the building.” In the actual design, she noted, getting from the southeast corner of the site to the northwest corner requires walking around the building; the students came up with a variety of site plans, all of which included passageways through the building, before settling on their preferred solution of a building whose lower floors are split by a diagonal passageway.

The students were also introduced to the U.S. Green Building Council’s LEED (Leadership in Energy and Environmental Design) principles, which they incorporated into their own redesign. “The easiest thing to think of was the lighting,” said Marconi. “What facades would benefit from more glass or less? What about rainwater collection? Energy efficiency?” They answered one of those questions by putting a green roof on their building and adding green space at ground level.

When the students tallied up the LEED points their project qualified for, they had accumulated 55, enough for the building to earn LEED Silver certification if it were built—a pretty impressive accomplishment for a bunch of “greenhorns.” (The actual Comcast Innovation and Technology Center has LEED Platinum certification.)

The ACE program leaders were so impressed with Team 6’s work that they chose it to represent ACE in the “Most Innovative Hands-On Project” competition, which drew 80 entries from organizations in 30 cities nationwide. While a team at University City High School took the project prize along with a project from Chicago, the members of Team 6 walked away with four of the nine scholarships awarded by ACE of Eastern Pennsylvania last year, a testament to their abilities and skills.

“They took a lot of pride in that, and they got really excited about it, which was a point of the STEM initiative,” Marconi said. 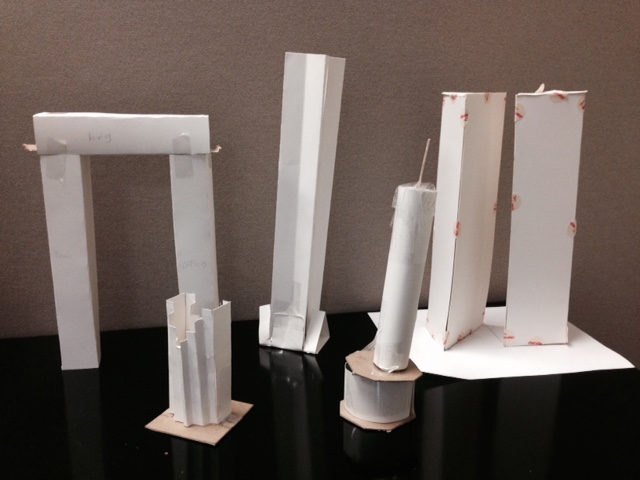 The team's models for their reworked tower 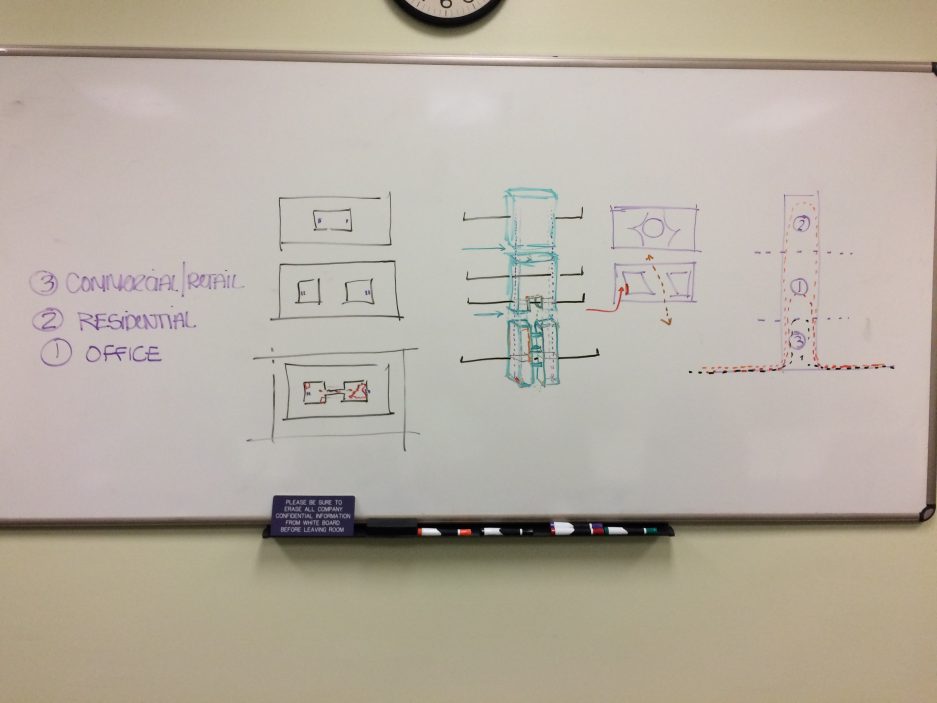 A whiteboard sketch fleshing out their final design concept 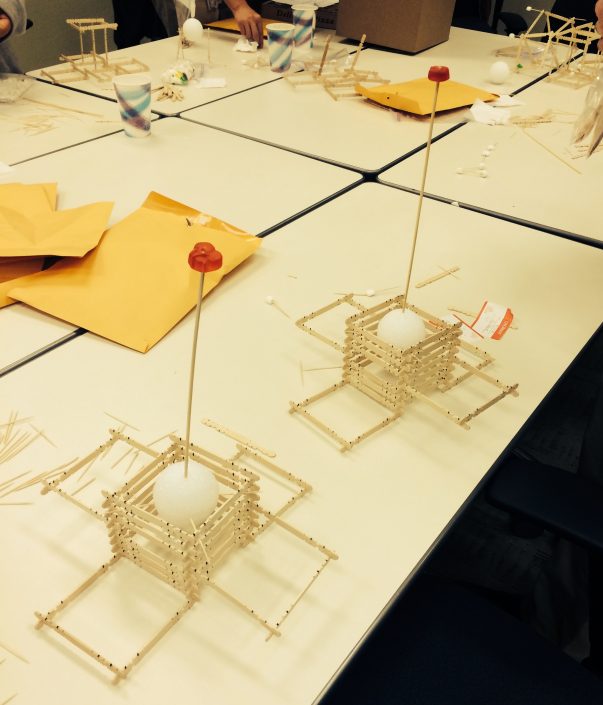 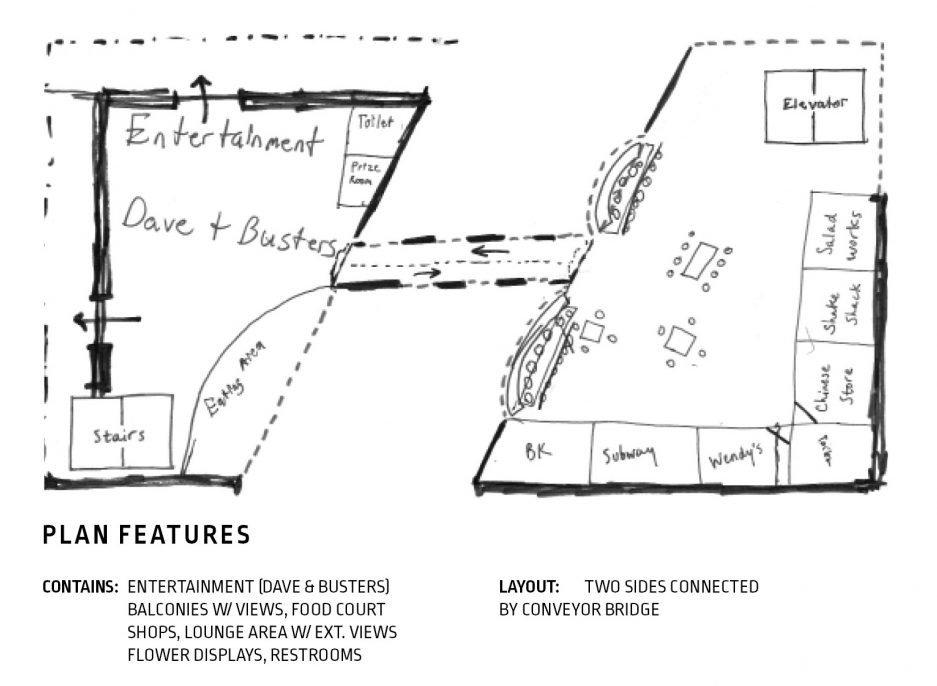 The entertainment component of the tower 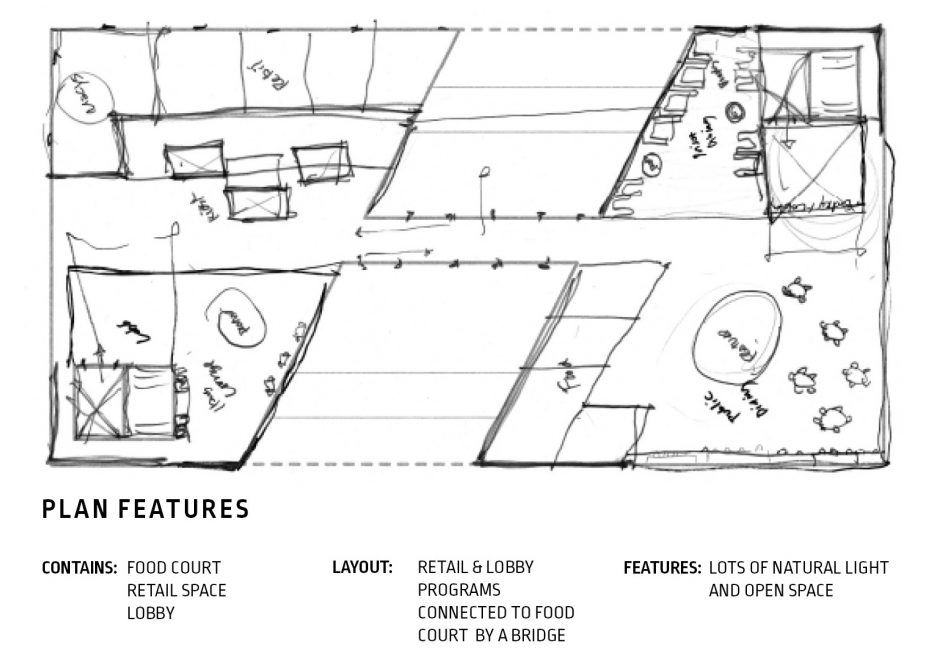 The commercial component of the tower 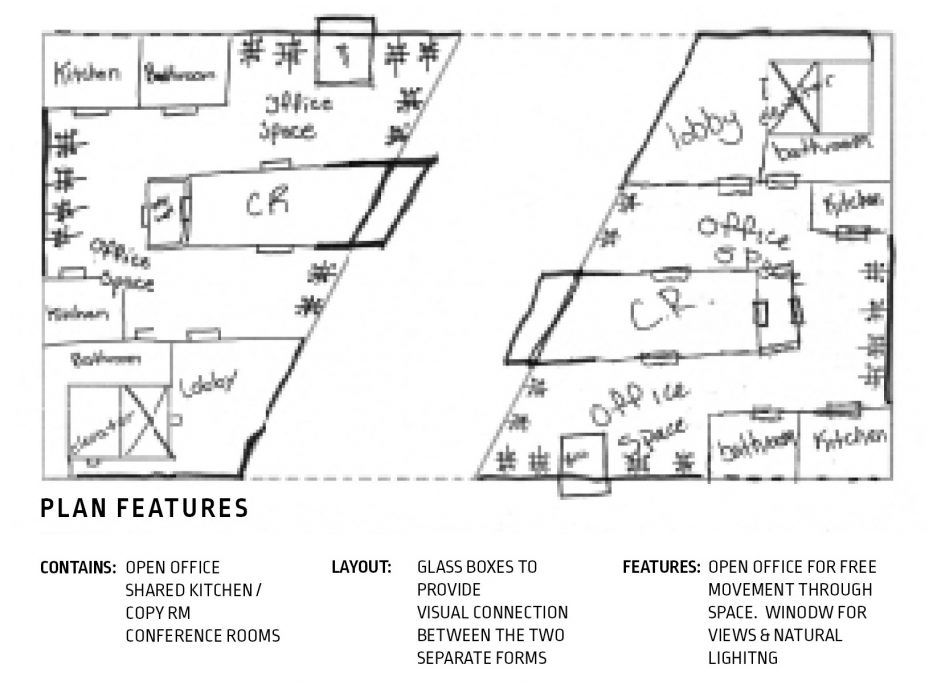 One of the lower office floors split by the path 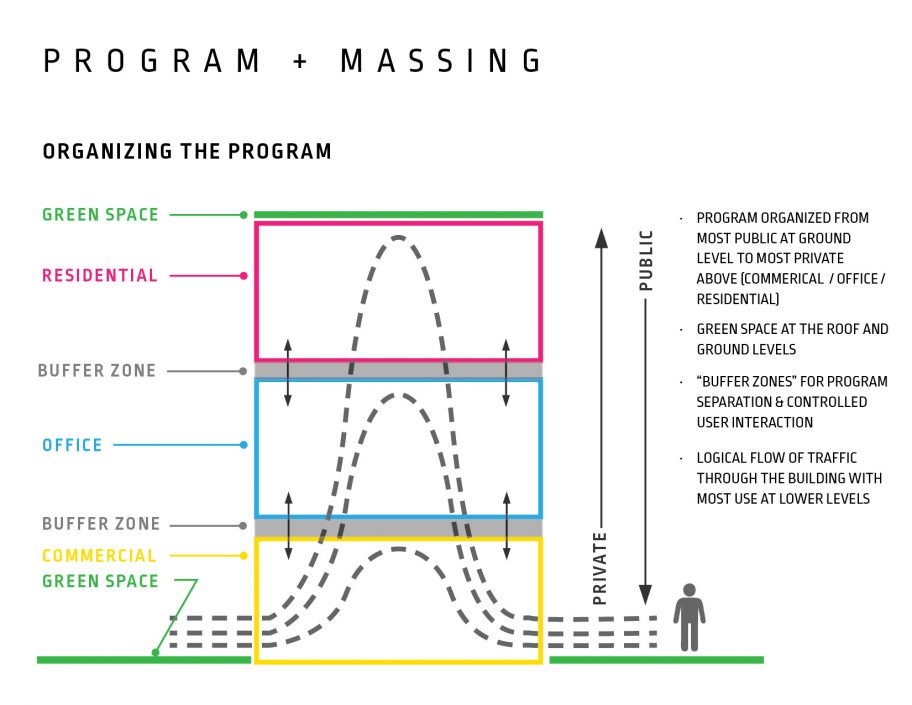 The building's program and massing 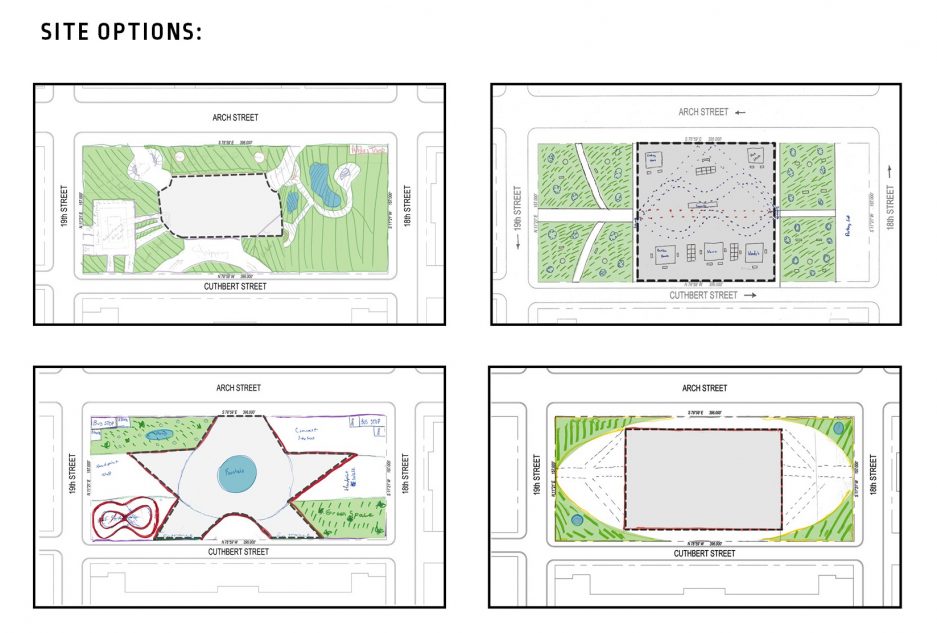 Early versions of the site plan