The surge in development in University City is showing no signs of slowing down, especially now that Wexford Science + Technology has unvieled plans to help the University City Science Center expand into a massive live-work neighborhood anchored by office and lab space, at least 300 (and potentially up to 600) apartments, plenty of retail and restaurants, new walkable streets and even a public square designed to give the 14-acre campus a sense of place.

Last week, the Science Center announced that they were looking to beef up their footprint to nearly 4 million square-feet as University City continues to position itself as an innovation hub in the heart of the Mid-Atlantic region. A major part of that is a partnership with Wexford, who will develop 10-acres worth of the former Univsersity City High School site.

“It’s the culmination of ongoing success among the anchor institutions in University City,” Science Center CEO Stephen Tang told BizPhilly’s Jared Shelly last week. “The growth of Penn, Drexel, the Children’s Hospital of Philadelphia — and the success we’ve had lately in nurturing startup companies that graduated from our incubator and wanted to stay in our facilities — makes this project possible.”

Drexel University is also a major player in this developement, as they are in the process of demolishing the former University City High School building and are planning to replace it with a public Kindergarten through 8th grade school and another educational building. The core of the plan is to reactivate the neighborhood scale of the area by adding streets to break up the super block created by the Science Center and University City High School. That includes reopening 37th Street through the center of the site to both vehicular and pedestrian traffic. Eventually, the street will connect to a central public square lined by retail on the ground floor.  Cuthbert Street will also be re-introduced to the footprint, slicing up the long stretch on 38th Street between Powelton Avenue and Market Street and funneling more neighborhood activity towards the public plaza. Joe Reagan, vice president of development at Wexford, called the square the “iconic heart” of the plan and explained that they are in “deep” discussions with a grocery store for one of the spaces fronting the square.

Bob Francis, vice president, university facilities of Drexel University, explained that “you can think of these things in very grand terms, but it always comes down to the neighborhood scale” and stressed the importance of the involvement of the community throughout the design and development process. “We’re working at a very detailed neighborhood scale to make things better for people who live here.” Francis said they have selected a architeture firm for the public school, “but are not prepared to announce yet … [but] that component is moving.” An announcement is expected “within a month.”

Make no bones about it, the plan is also to create a place that attracts top talent to the Science Center as well. “We want stores, restaurants and other establishments that attract the type of people we want — innovative minds and creative types,” Tang said last week.

Wexford’s long-term plan is to develop as many as five towers around the center square, one of which will be dedicated to another 300-unit “give or take” residential building roughly at the size and scale of 3601 Market Street. Though no timeline is set for any one of the towers surrounding the square, Reagan said that the development of any one of the five buildings could start with the acquisition of an anchor tenant, “many of which we are in contact with now.” They’re also talking with tech firms, life sciences companies, big data and research companies and traditional office clients as potential tenants at the site.

Reagan explained that the first phase of the 10-year project involves two buildings serving different functions.  A low-rise 300-unit residential component with underground parking and retail will be built on the northern edge of the site roughly bound by 37th and 38th streets and Powelton and Lancaster avenues.

On Market Street, a 200,000-square-foot, “at least LEED Silver certified” office building called 3675 Market would replace a “flex building” and a parking garage in order to create the extension of 37th Street to Market Street. The new tower will become the new headquarters for the Science Center. Corner retail is also a possibility at the newly created intersection. Construction on these first phases projects is expected to get underway by the end of the year.

Saul Behar, vice president and general counsel at the Science Center, said they are “very excited” about the overall project. “We are basically at capacity in terms of our vacancy … we’re about 99%,” said Behar. “[the entire expansion plan] is critical for us. This really is meeting and is responding to market demand.”

It’s worth noting that the designs are not final, although Reagan did say that ZGF Architects, the group who designed 3711 Market and 3737 Market, is on board to design the building at 3675 Market. “We have a longstanding relationship with them here in University City and in the Science Center,” said Reagan. Requests for proposals are currently out for the design of the residential development, which are due in July. Ayers Saint Gross, Boles, Smyth Associations and Philly-based OLIN are also involved in the initial planning of the project. 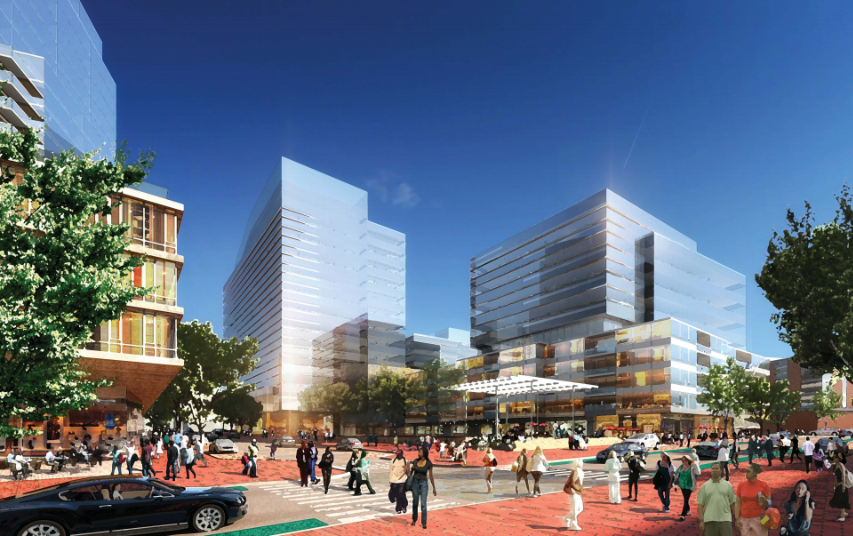 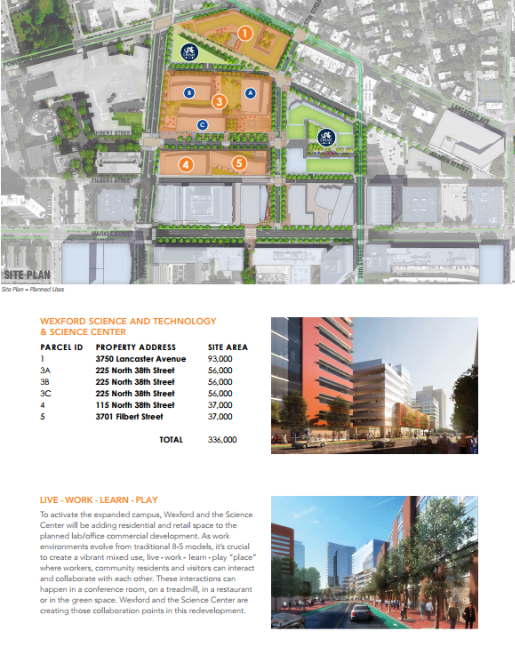 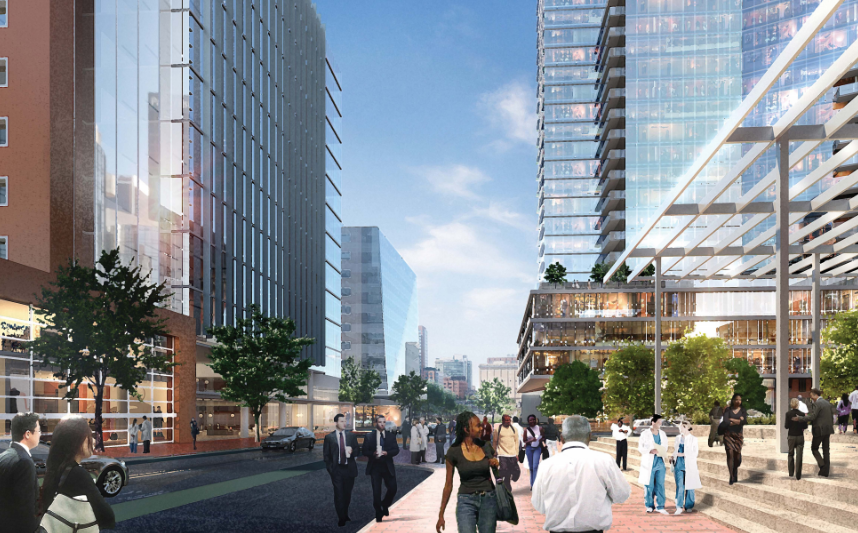 View Looking South at 37th Street along the Plaza 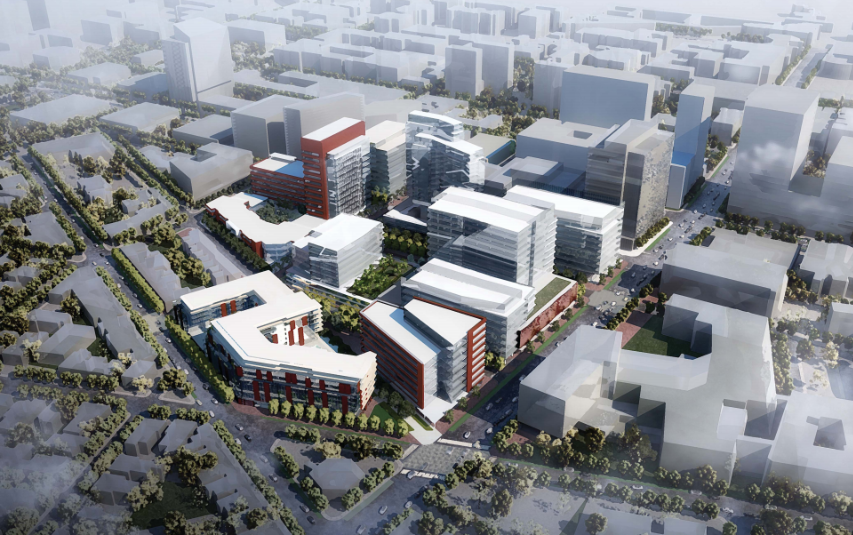 Aerial View from the Northwest 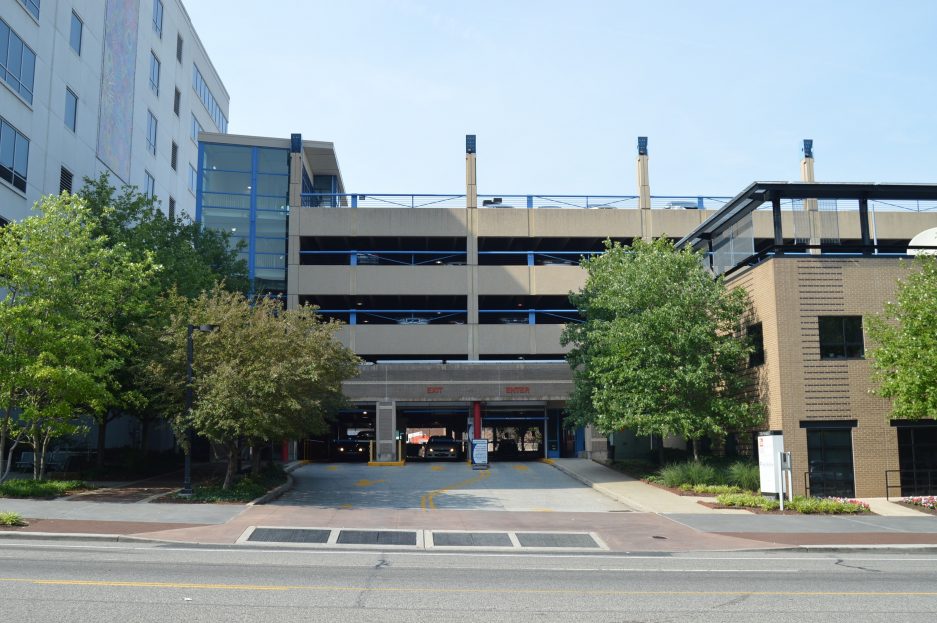 37th Street will replace this garage. 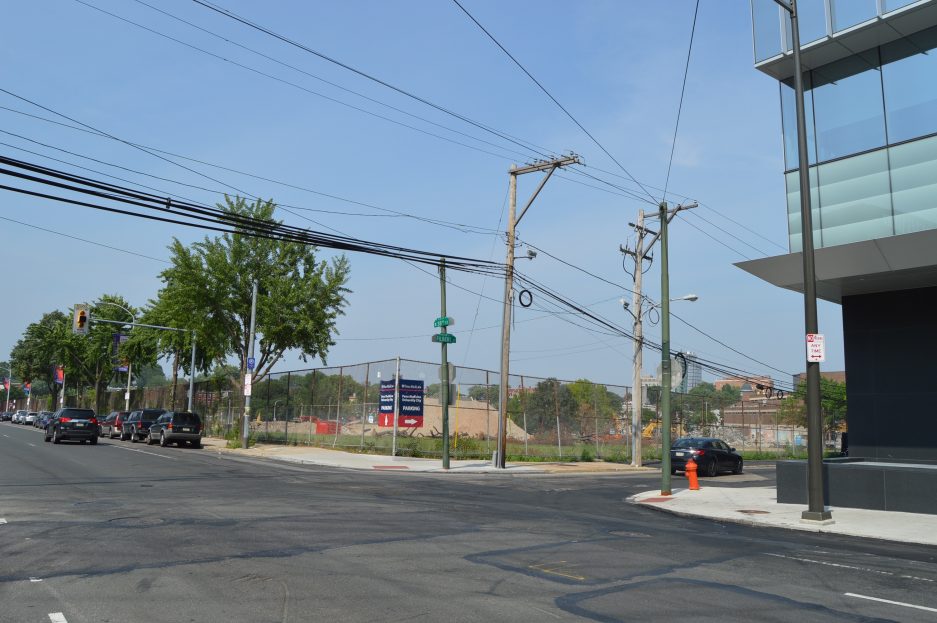 Corner of 38th and Filbert 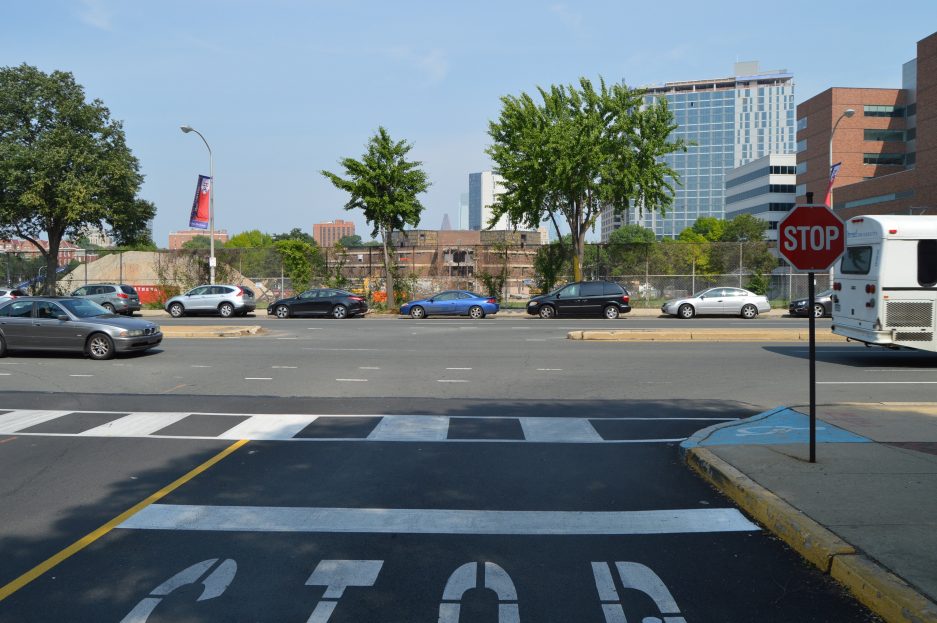 Cuthbert Street will extend into the tower area and meet 37th Street. 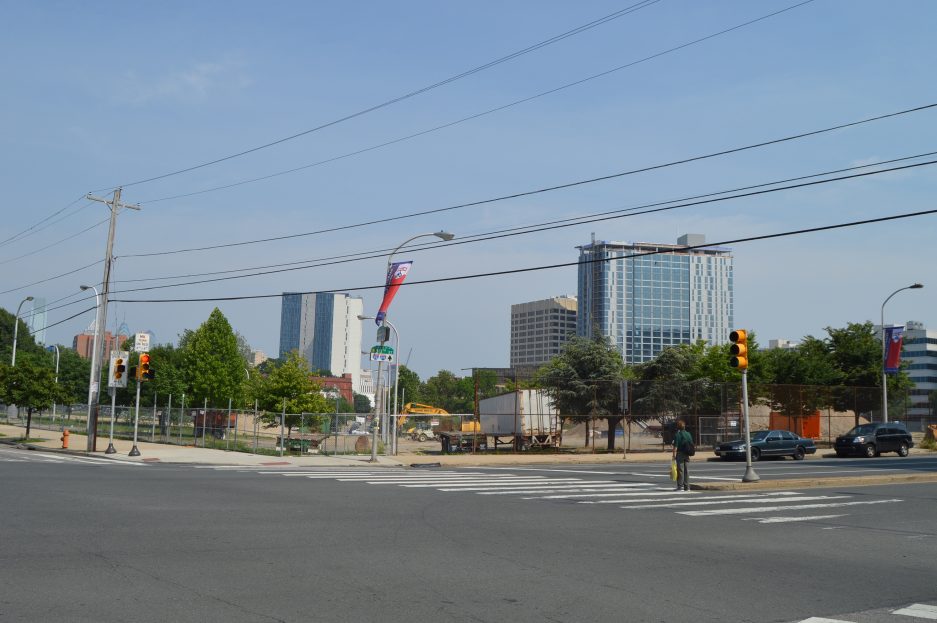 Corner of 38th and Powelton Avenue 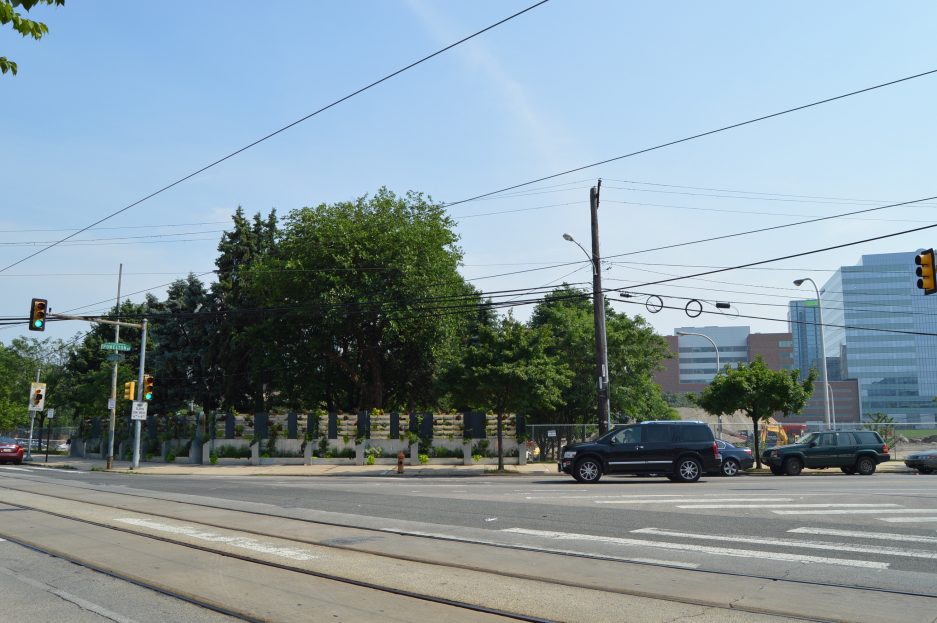 Corner of Powelton and Lancaster avenue 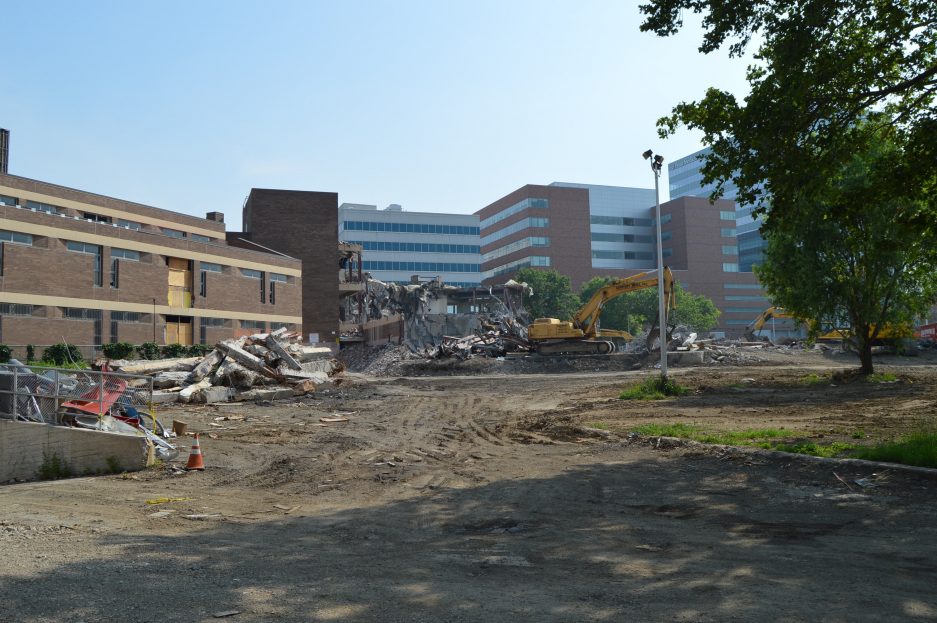