Whatever Happened to…the Vulcanite Paving Company at 17th and Market? 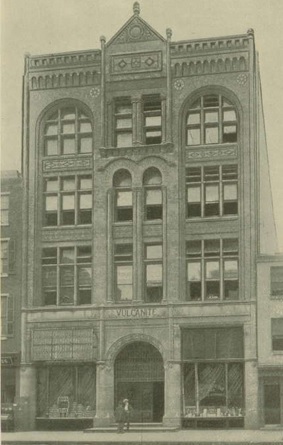 Check out this beauty from a time when even a small-time office building was something to design the crap out of. The Vulcanite Building, besides having one of the coolest building names ever, was a masterpiece of commercial design that only stood for 34 years and came to an unceremonious end to make room for a project that never happened.

Doctor Ludwig Sprang Filbert was the child of two of Berks County’s original families. Working himself up from nothing, this genius became so singularly known in the medical field that people just referred to him as “The Doctor.” In 1870, at 55, The Doctor said, “Screw this” and gave up medicine to start the Vulcanite Paving Company out of his rowhouse at 1902 Green Street.

The Doctor had some kind of futuristic knowledge about asphalt. He invented his own patented mixture, Filbert’s Vulcanized Compressed Asphaltum, and made an exclusive deal to become the only paver in the region who imported Trinidad Asphalt, which had only started being mined from the Trinidad Pitch Lake a few years earlier. Almost immediately, the Vulcanite Paving Company was covering roadways, driveways, sidewalks, basements, backyards, slaughterhouse floors, roofs and everywhere else that needed waterproofing.

By the end of the 1880s, Vulcanite had a monopoly on asphalt paving and was banging out public and private contracts left and right. Big players in the city’s infamous Republican machine guaranteed Vulcanite would get plenty of public work, much to the chagrin of the company’s competitors, who weren’t even considered at the time because their pavement mixtures sucked in comparison.

Vulcanite covered miles of roads and sidewalks in Philadelphia, D.C., Pittsburgh, Baltimore and Columbus. Philadelphia City Hall had both its roof and floors covered by the Vulcanite Paving Company. The Doctor helped start paving companies in other parts of the country and held shares in every one. In the early 1890s, the company moved its offices out of Doctor Filbert’s house to build a 39,600-square-foot downtown office building at 1710-12 Market Street. It was finished by the end of 1894, and though it was only four stories, it (briefly) towered over anything else in the immediate area and was highly visible to passengers on the trains coming over the old Chinese Wall across the street.

In 1896, one of the company’s major shareholders retired, forcing the company to be bought out by one of its competitors. That competitor, the Barber Asphalt Paving Company, decided to retain Vulcanite Paving as the name of the concern, partially because it was trying to disguise the fact that it was attempting a world-wide monopoly on asphalt. After The Doctor’s death in 1903, the company, barely surviving the massive decline of the asphalt industry that started in 1898, gave up on their own building and moved to the 19th floor of the Land Title Building, a structure they had roofed when it was first built. The Vulcanite Building would still be referred to by that name until it was demolished.

During World War I, the building became the home office of the Philadelphia Ordinance District, recruiting and directing the 250,000 people in the Philadelphia region who were employed manufacturing materials needed for waging war. Once the war was over, the Ordinance Districts of Rochester, Pittsburgh, New York, Baltimore, and Philadelphia were all consolidated into the Vulcanite Building. Now the Ordinance Salvage Board, this consolidated office managed the sales of surplus goods and real estate left over from the wartime manufacturing effort. 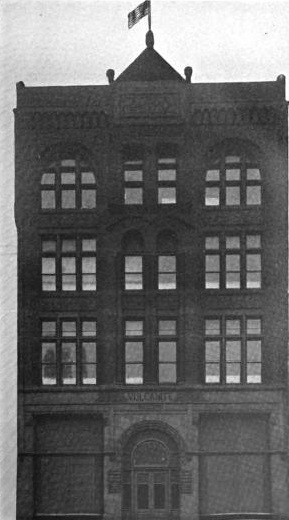 The Vulcanite Building serving as the Ordinance Salvage Board in 1921, from the book Munitions Manufacture in the Philadelphia Ordinance District. Notice the shuttered showrooms at the ground floor.

After the Ordinance Salvage Board moved out, the C.E. Howe Addressing and Printing Company of Philadelphia and another concern simply known as Polk and Company were the last tenants to use the Vulcanite Building. In the mid-1920s, the 1600 and 1700 blocks of Market were eyed up by planners for the new location of the city’s General Post Office. A two-block long juggernaut of a building was designed and the city started acquiring the properties that were in the way, which included the Vulcanite Building.

Then, everything changed. The planning of what would become 30th Street Station caused everyone involved to change their minds and build the new mega-post office at 30th and Chestnut instead. The result of this still stands as the IRS 30th Street Campus. The lot created by the destruction of most of the 1700 block of Market became a surface parking lot and stayed that way until 1967 when the Industrial Valley Bank Building, one of the city’s ugliest, was constructed in its place.

What a bummer. The Vulcanite Building barely got a chance to shine… it would have been nice if it lasted long enough to have a color picture taken of it. The legacy of the Vulcanite Paving Company still lives on. If you look hard enough, you can still find their plaque on sidewalks in cities all over the nation. 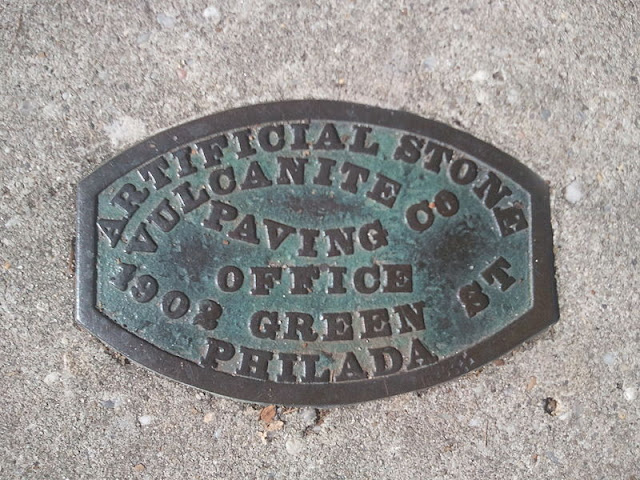