And the groom's Christmas proposal will make your heart melt. 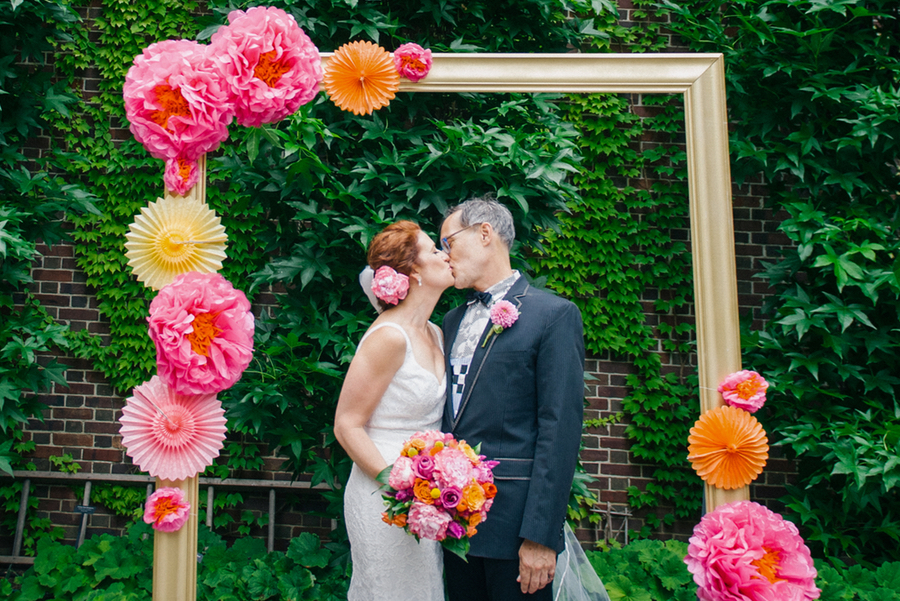 We are obsessed with the all-around uniqueness and fun of Betsy Oliphant and Andrew Ross’ union. From the unconventional style of the Mutter Museum, the venue for their ceremony and reception, to their citywide special-fueled first look shots, this wedding exudes happiness and a love that is uniquely theirs, despite the fact that rain caused a change of plans. See the fun for yourself in the photos below by Sweetwater Portraits. 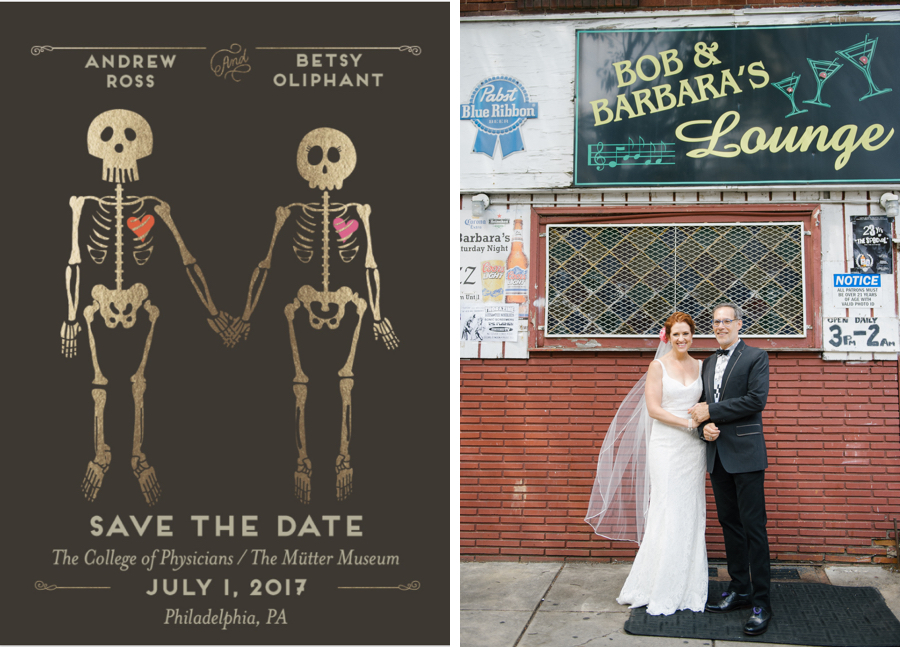 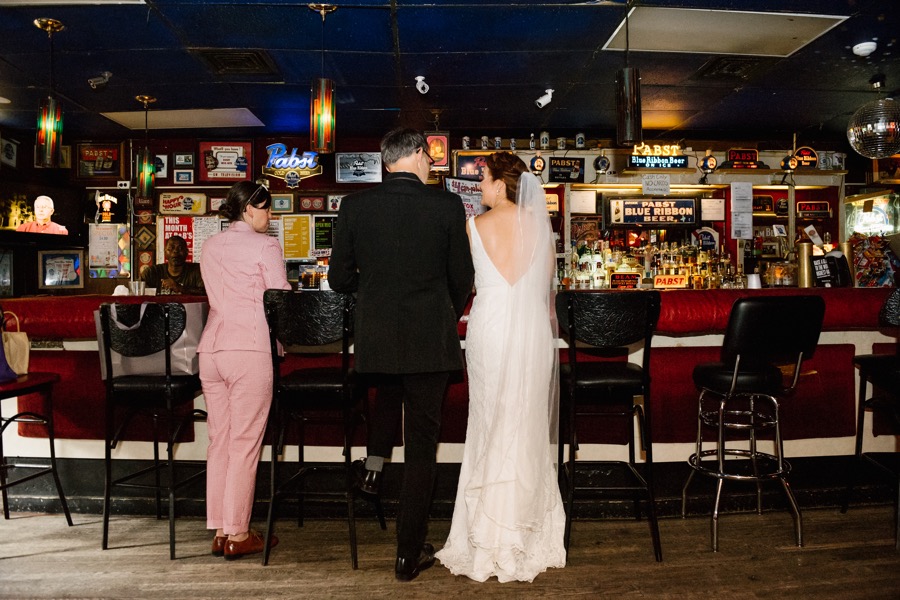 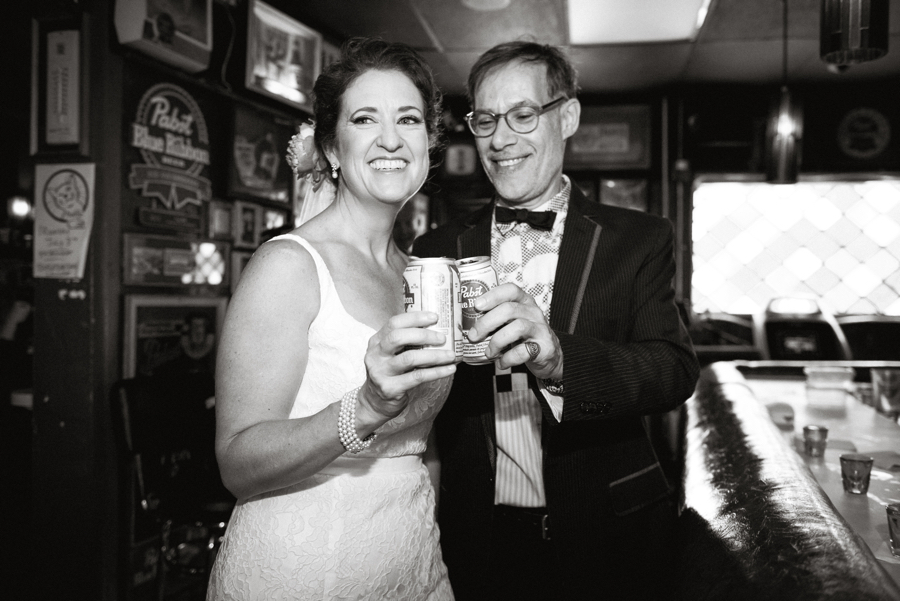 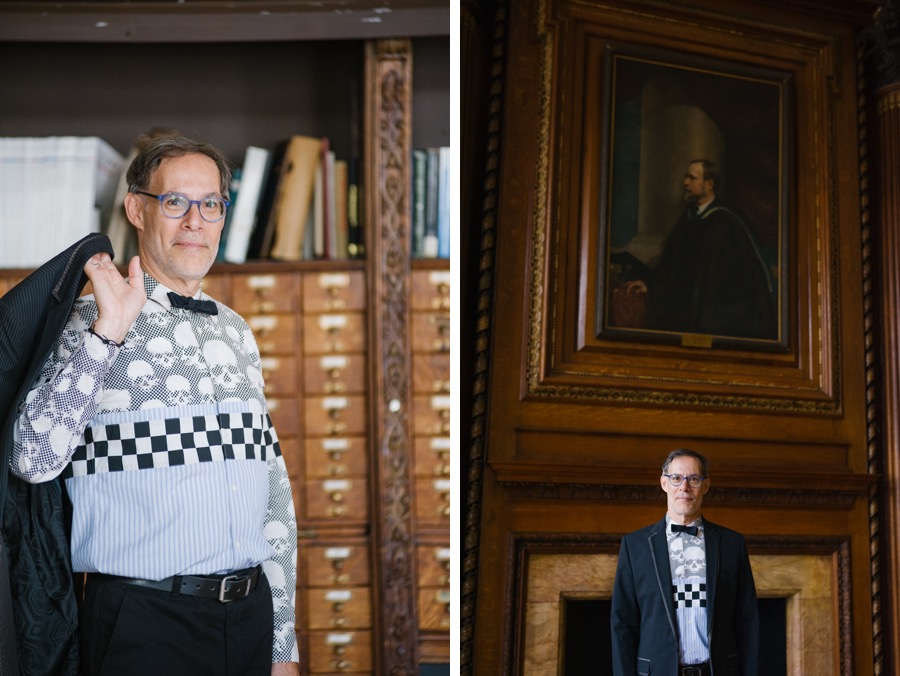 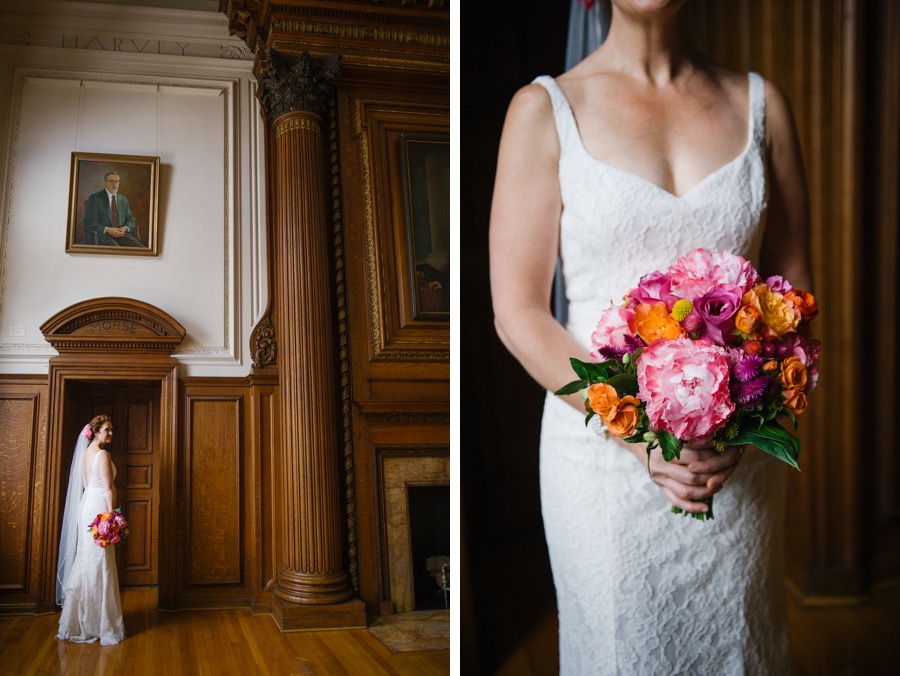 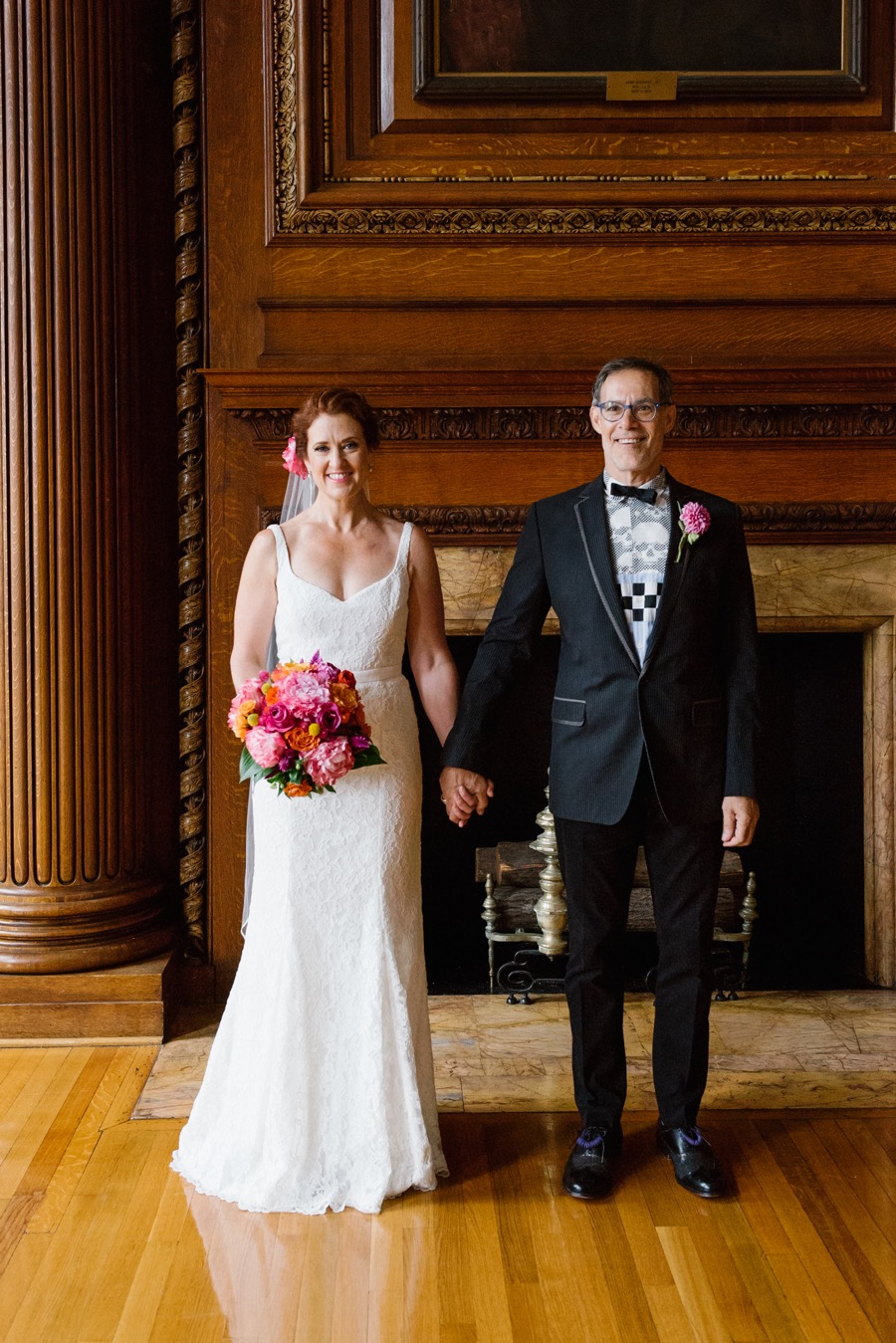 Andrew and Betsy’s relationship is Philly through and through: They met at the infamous Bob and Barbara’s on South Street in September of 2015. They were both there because John Fetterman, mayor of Braddock, PA, was campaigning for a seat in the U.S. Senate and had an appearance that night. They were introduced and the conversation followed easily and naturally. Betsy was drawn to Andrew’s quiet confidence, and loved that he was involved in Philly’s goings on. Andrew’s first impression of Betsy was that she was “radiant and radiating vibrancy.”

For their first date, the pair went to Opera on The Mall at the Academy House, then to see a band at Underground Arts, before finally stopping at the Trestle Inn for more conversation over whiskey. Mind you, Betsy drove them on her scooter to each destination. 14 months later, on Christmas Eve while prepping for family to come over, Andrew suggested that Betsy open one specific present early, but told her that it “comes with a question.” He handed her the wrapped box, then got down on one knee and proposed. Without even opening the box, Betsy said yes. After some hugs, kisses and tears, Betsy opened to box to discover a vintage Tiffany ring while Andrew serenaded her with his own rendition of “Let it Snow” — “Say I Do, say I Do, say I Do.”

Six months later, Andrew and Betsy exchanged vows in an intimate ceremony at the Mütter Museum at the College of Physicians. Before they exchanged vows, the couple revisited the spot of their first date — Bob and Barbara’s — for a quick citywide (that’s a shot and beer for you out-of-towners) and their first look photo shoot. Their ceremony was originally planned to be an outside in the courtyard, but fickle weather resulted in a last-minute decision to move it indoors, to the foyer of the building. 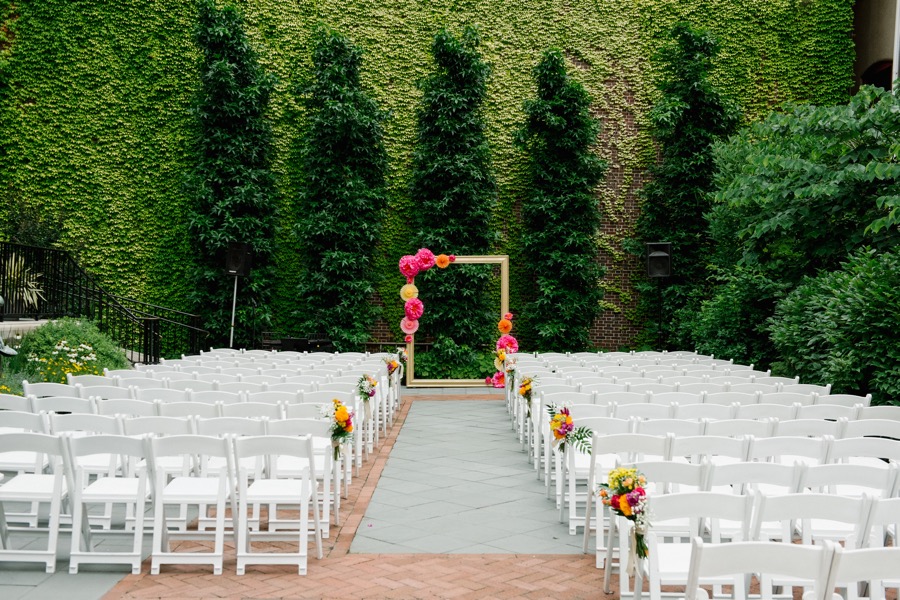 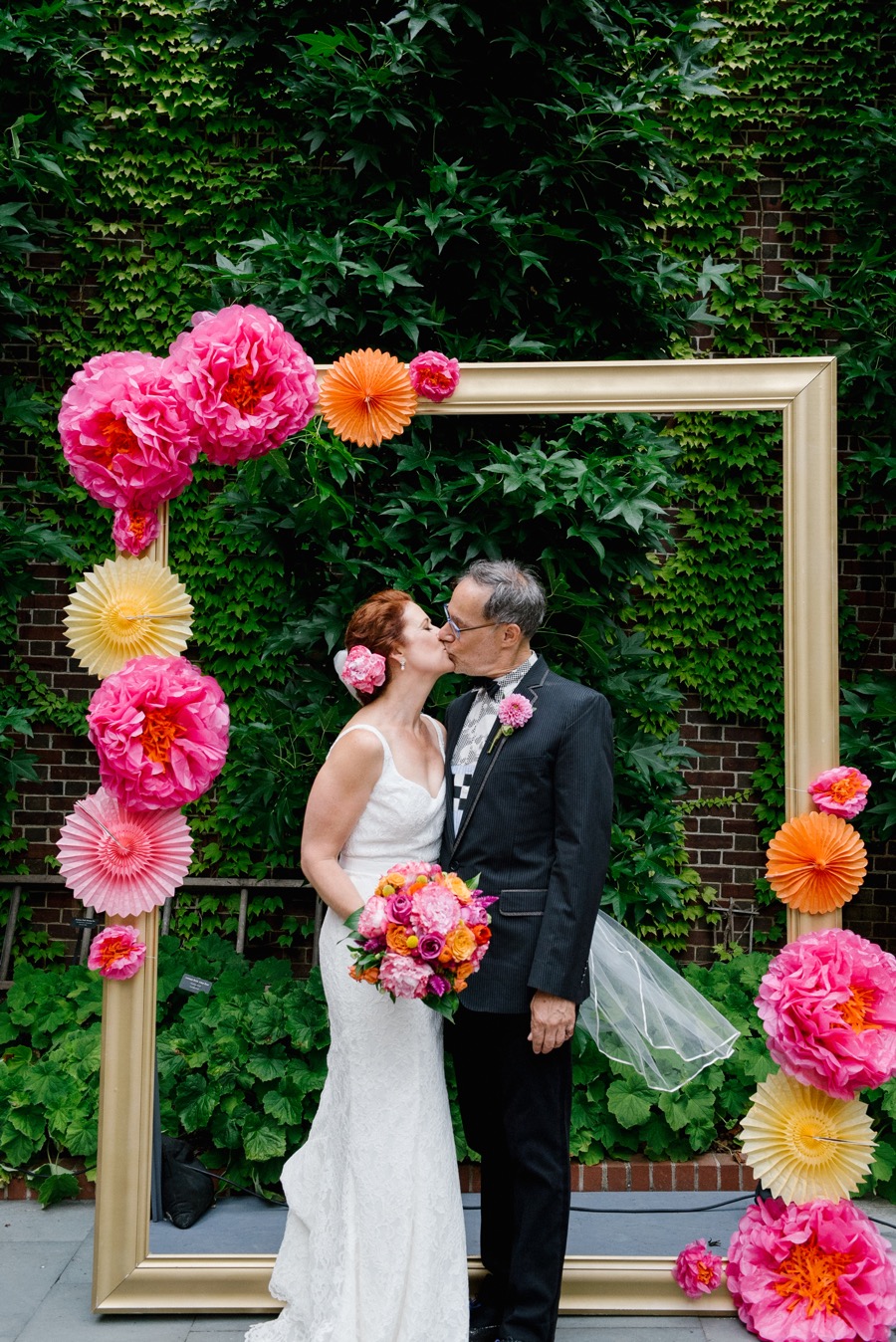 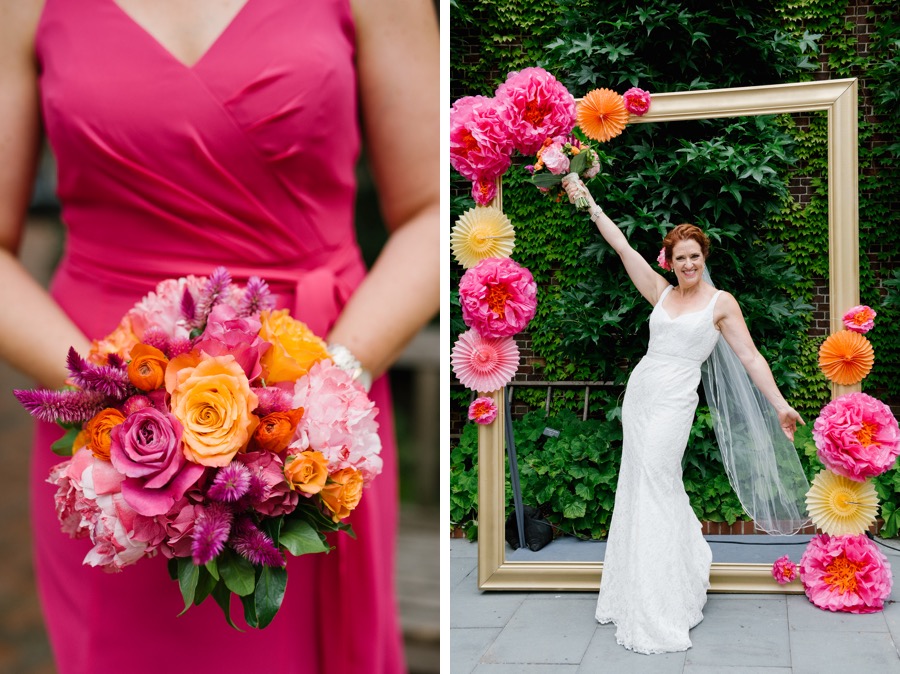 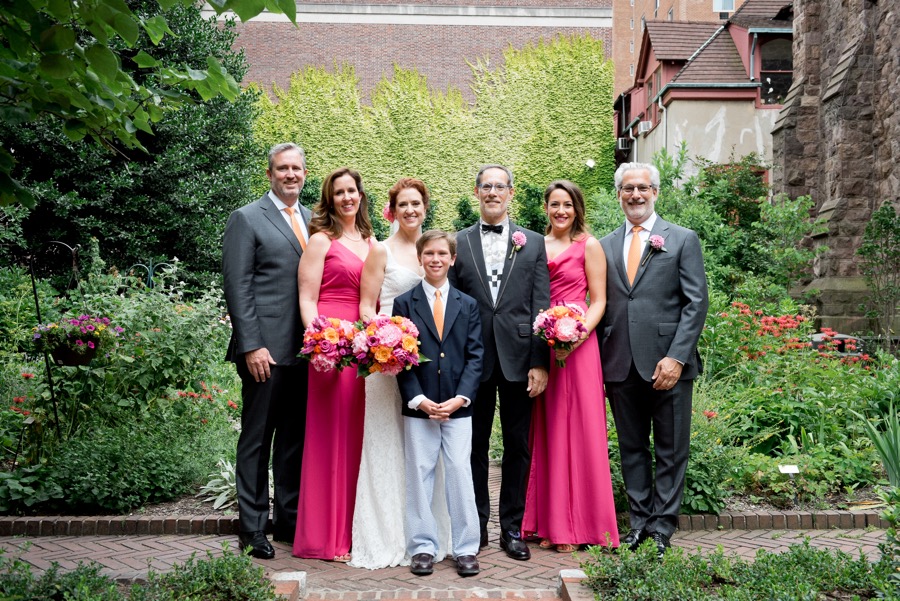 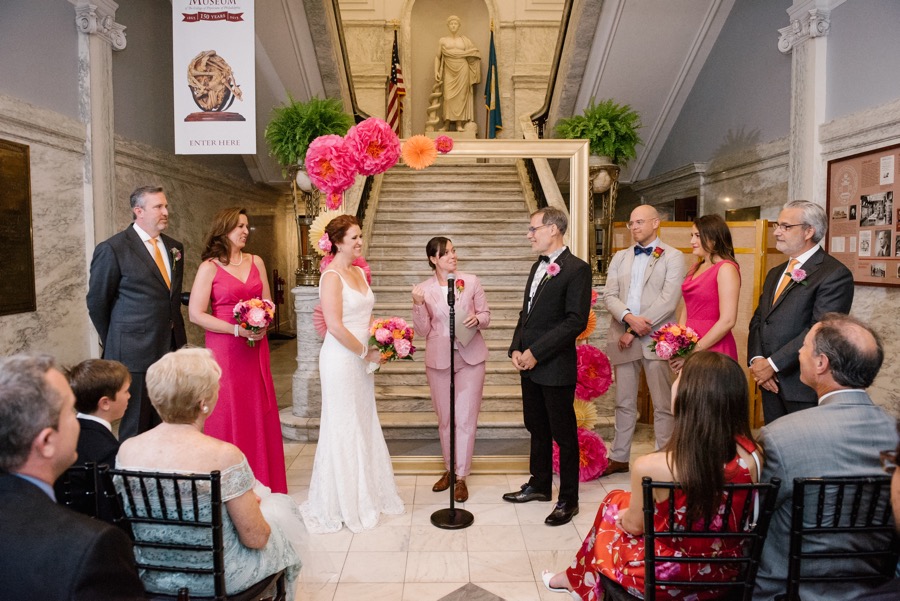 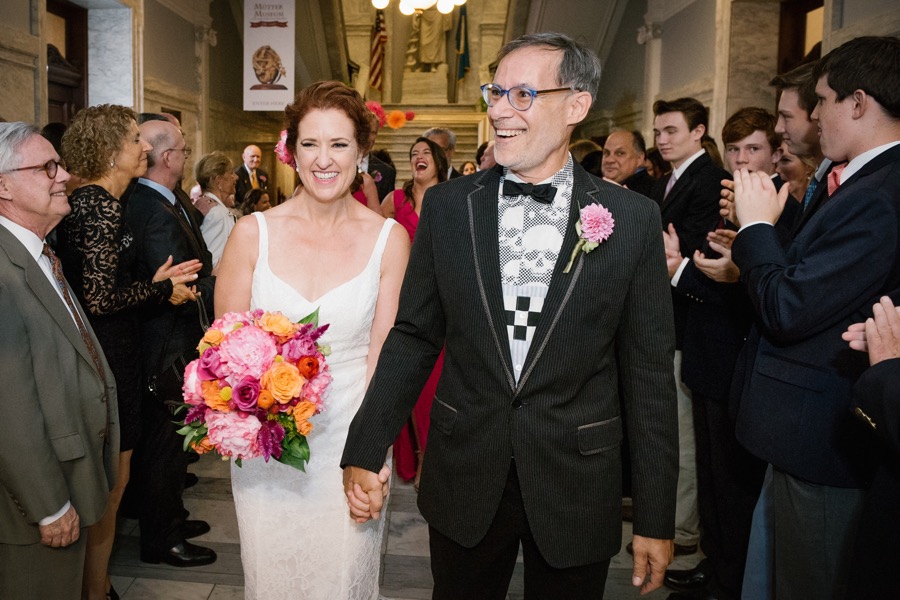 First priority of the change was moving the couple’s beautiful altar-like frame, made by a friend from repurposed molding from Philly’s Resource Exchange. In accordance with the true unconventional nature of the couple, Betsy entered from behind the altar, where there happened to be a gorgeous marble staircase, instead of entering from the rear, as per wedding tradition. Andrew and Betsy exchanged personally written vows that were kept a secret until the ceremony.

The reception was filled with bright bright fuchsia, orange and green hues. July 1st, the day of their wedding, also happens to be Canada Day and, this anniversary was was a big one — the country was celebrating 150 years. Betsy attended high school in Canada, and some the wedding guests traveled from Canada to attend, so the couple added a maple leaf accents to their day to celebrate. 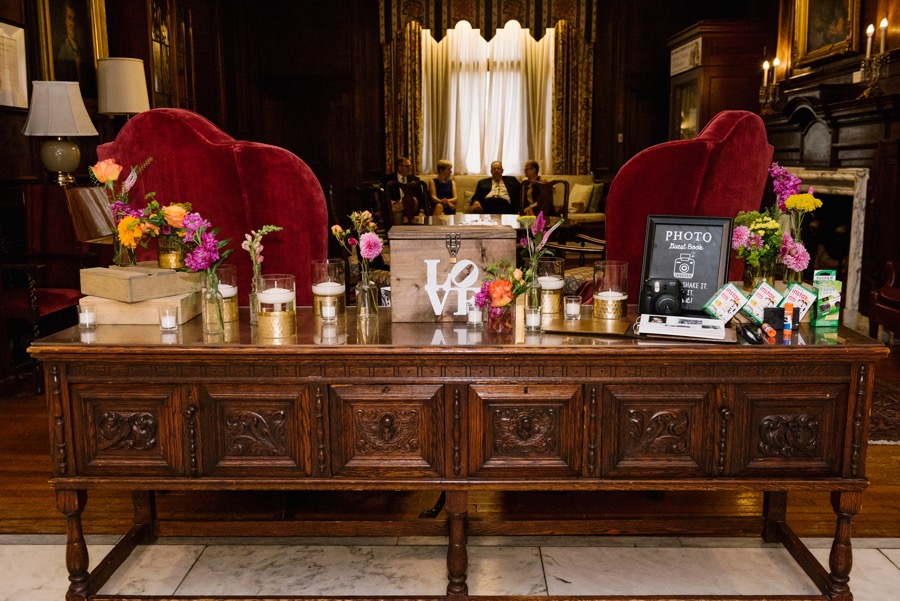 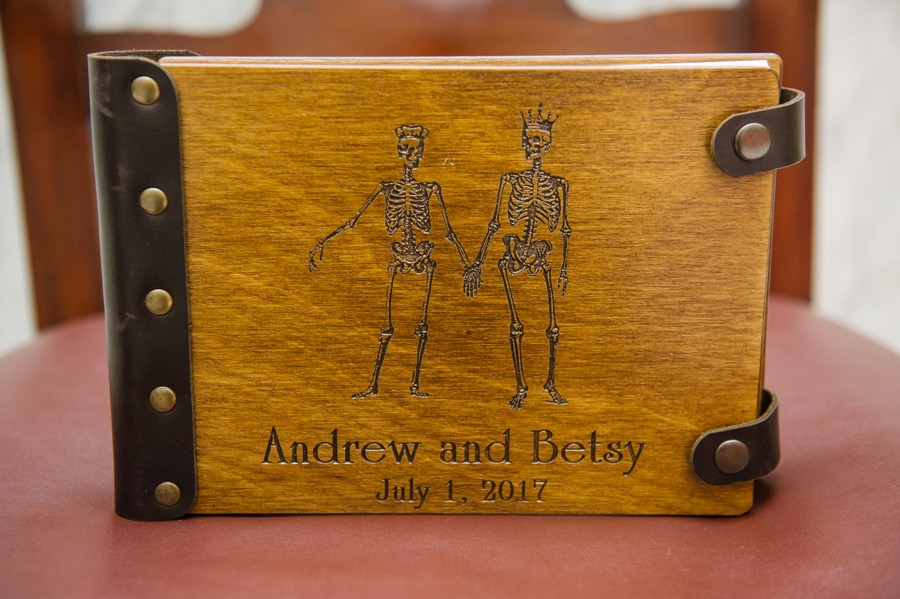 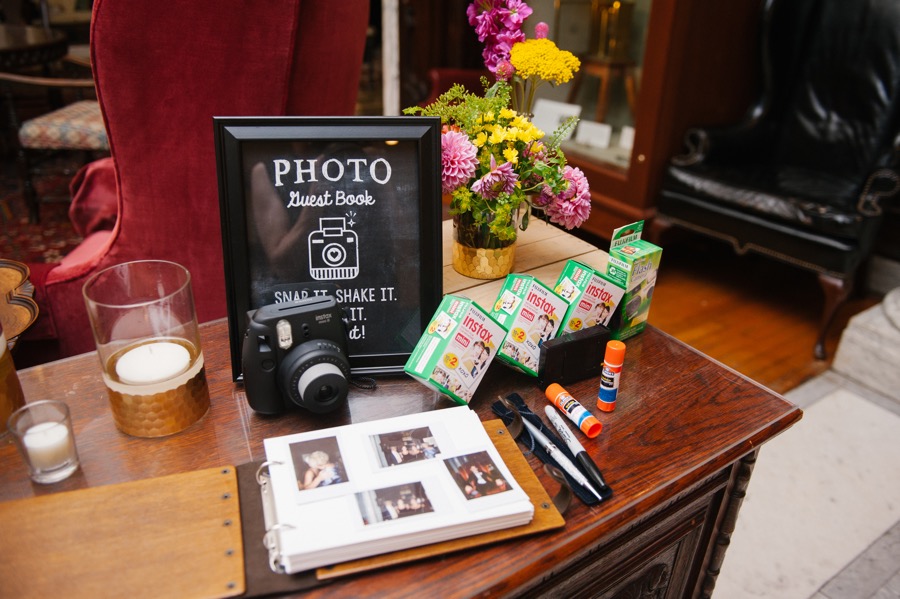 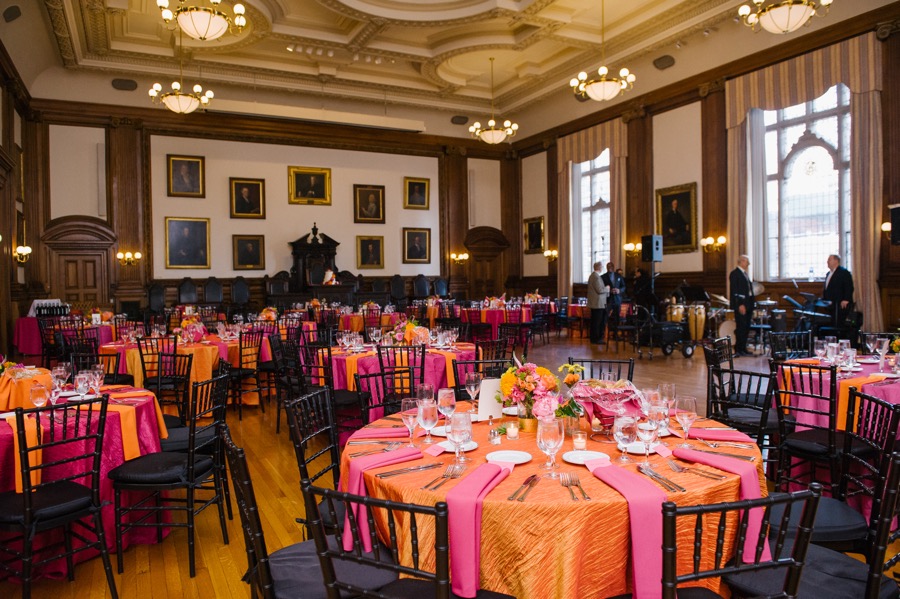 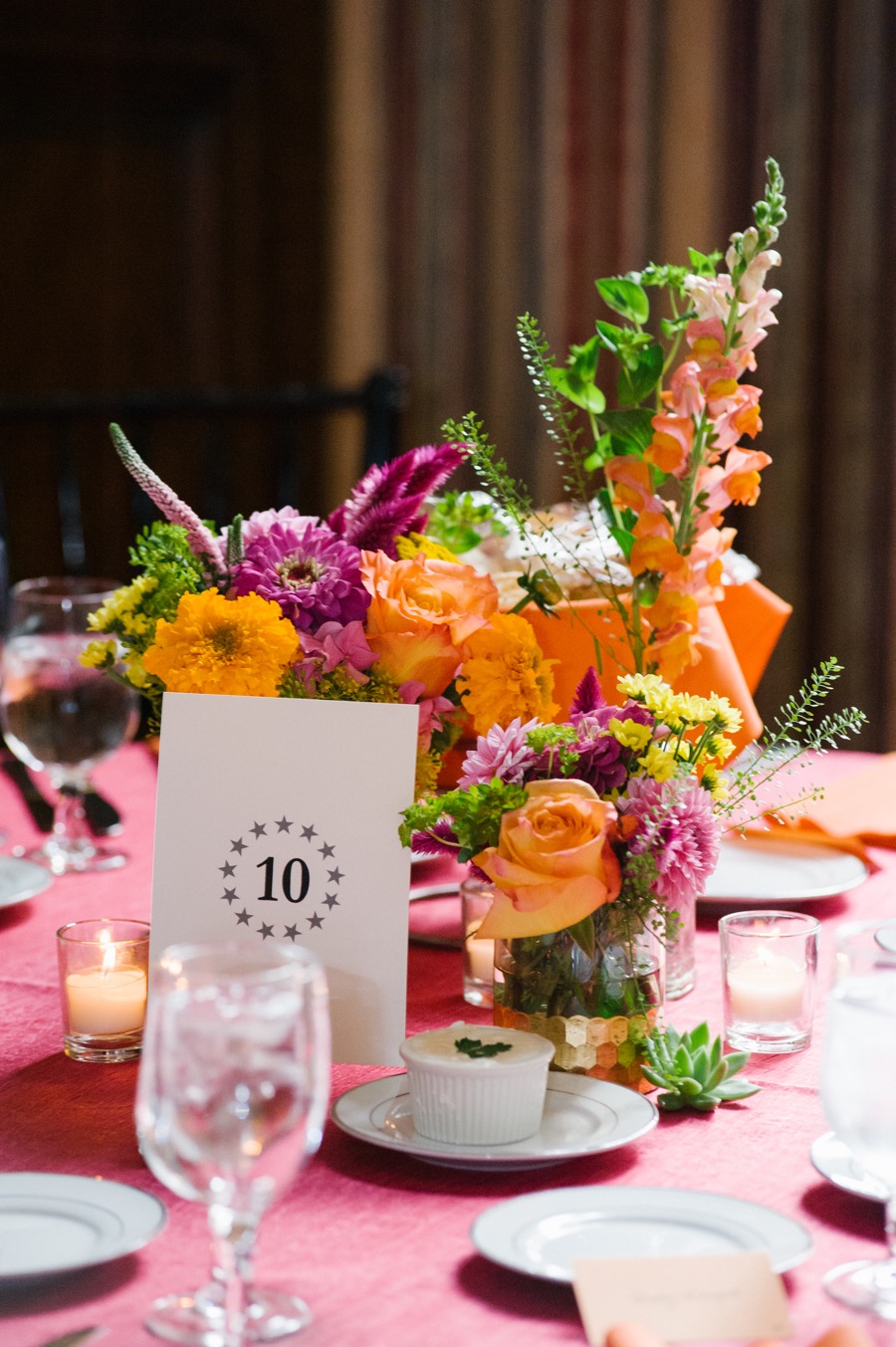 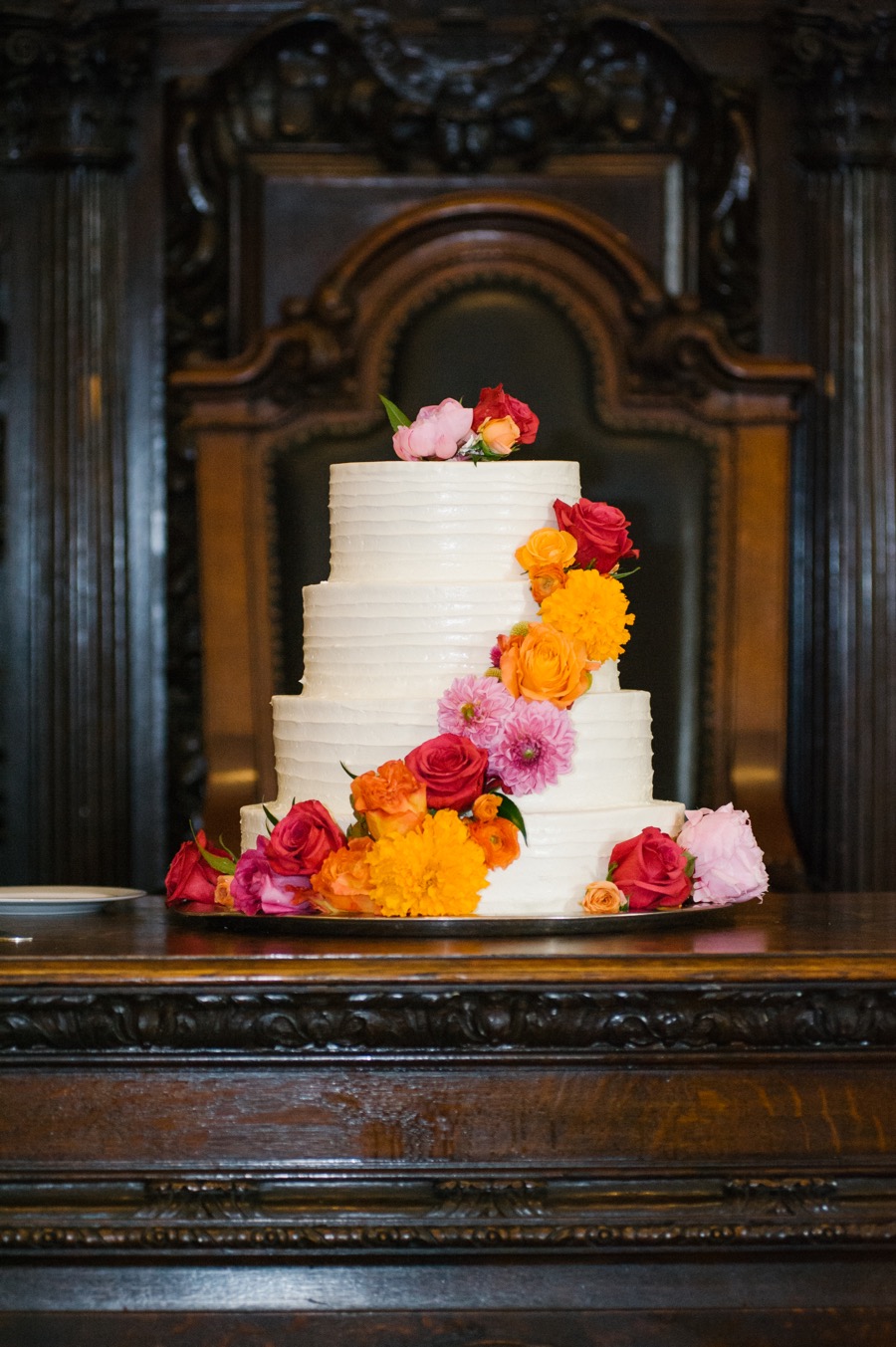 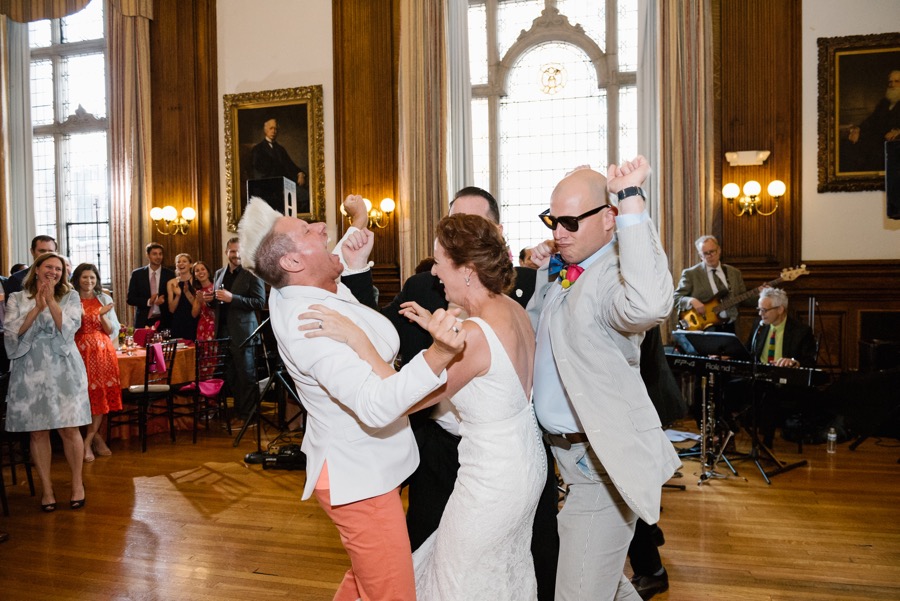 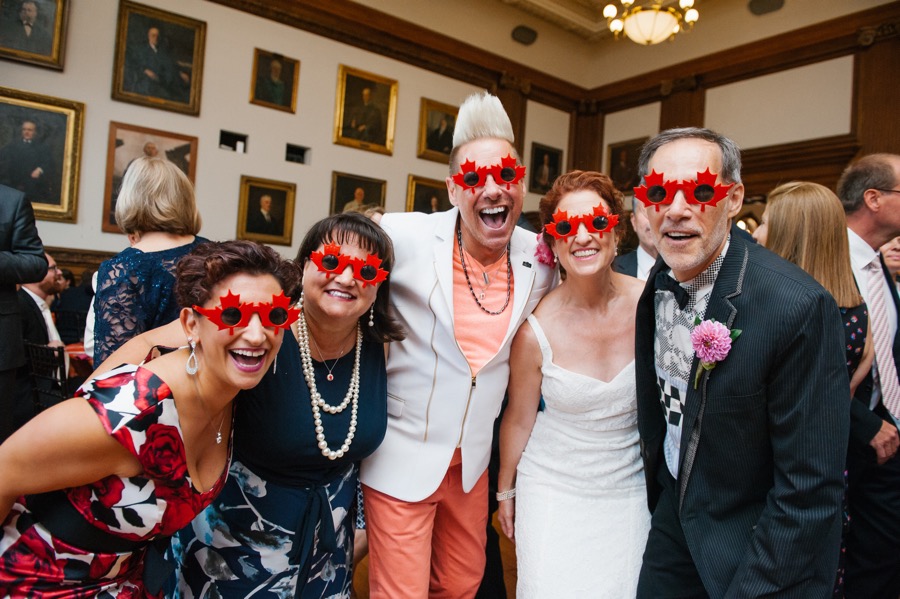 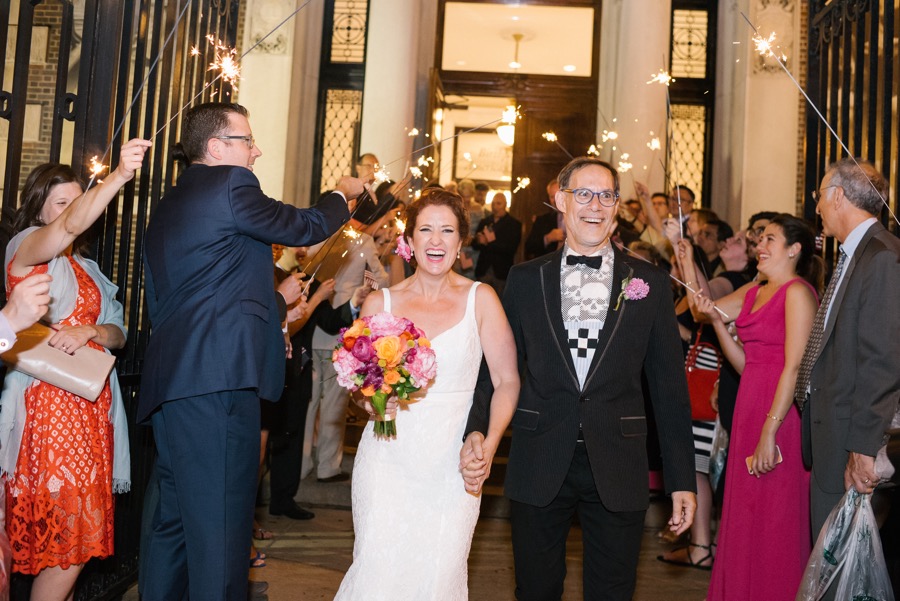 Before slicing into their flower-adorned vanilla pound cake cake, Betsy and Andrew danced to Billy Joel’s “You’re My Home” for their first dance. Guests sent them off waving sparklers and American flags (the flags were a nod to the bride now sharing a name with the great Philadelphian patriot and flag maker Betsy Ross), and they honeymooned in Brazil.