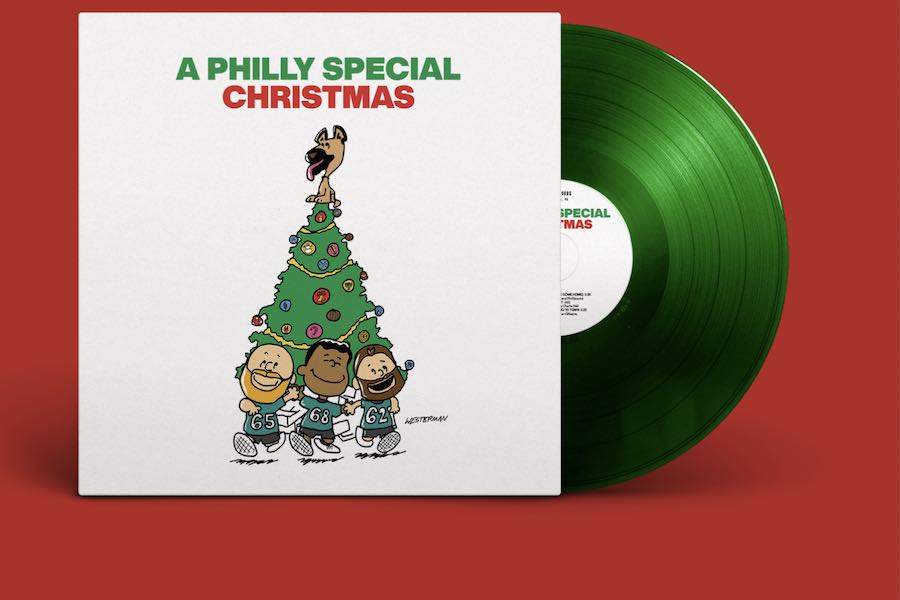 The Philadelphia Eagles Christmas album, A Very Philly Christmas, which sold out in about two minutes.

The Philadelphia Eagles Christmas album, A Philly Special Christmas, is all the rage. Pre-orders of the first vinyl pressing sold out a while ago. Then last weekend, the Eagles pro shops offered copies autographed by the three main Eagles players on the album. The stores sold out of those copies in about ten minutes. But then we learned that a second (and, according to two sources involved with the production, final) pressing (as in, this is your last chance ever to buy this album on vinyl) would be going on sale at 9 a.m. on Friday morning. Well, that didn’t work out so well for most of us.

On the website for the Eagles Christmas album, you could enter an email address to get a reminder at 9 a.m. on Friday inviting you to the sale. I did so under three different email addresses. But I didn’t wait for those emails to come, which is a good thing, because I never saw one. Others report not getting the promised email.

Around 8:30 a.m., I started checking the website to see if they maybe turned sales on early. Nope. Kept checking. Around 8:58 a.m., the website started loading very slowly. I had it going on my laptop, phone and tablet. It loaded within a minute or two, but the sale hadn’t started yet. Kept trying. At 9:03 a.m., voila! I was able to add two copies of the Eagles Christmas album to my cart and proceed to checkout.

Then I got this message: 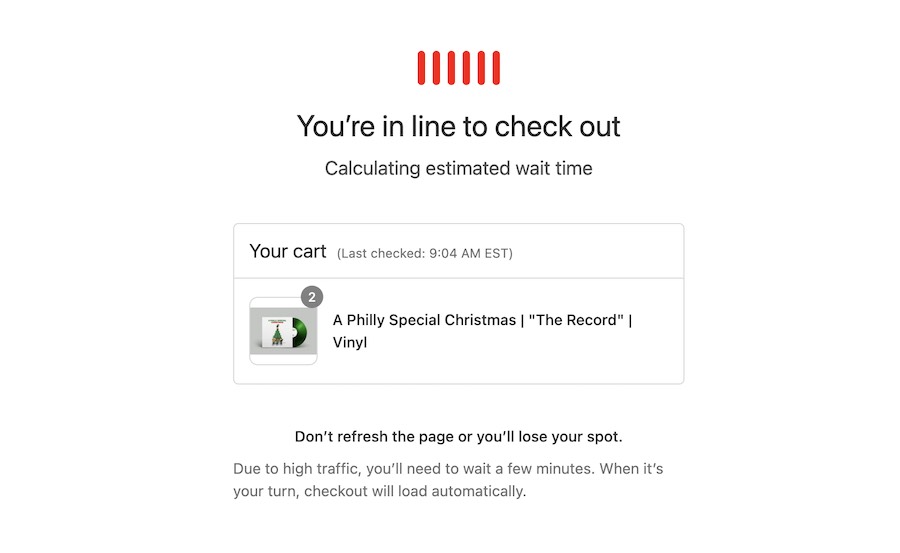 So I waited … and waited … for what seemed like forever … the way you wait in a Ticketmaster queue for Taylor Swift tickets. (That joke will never get old.) But it was really only two minutes. Maybe a hair less. 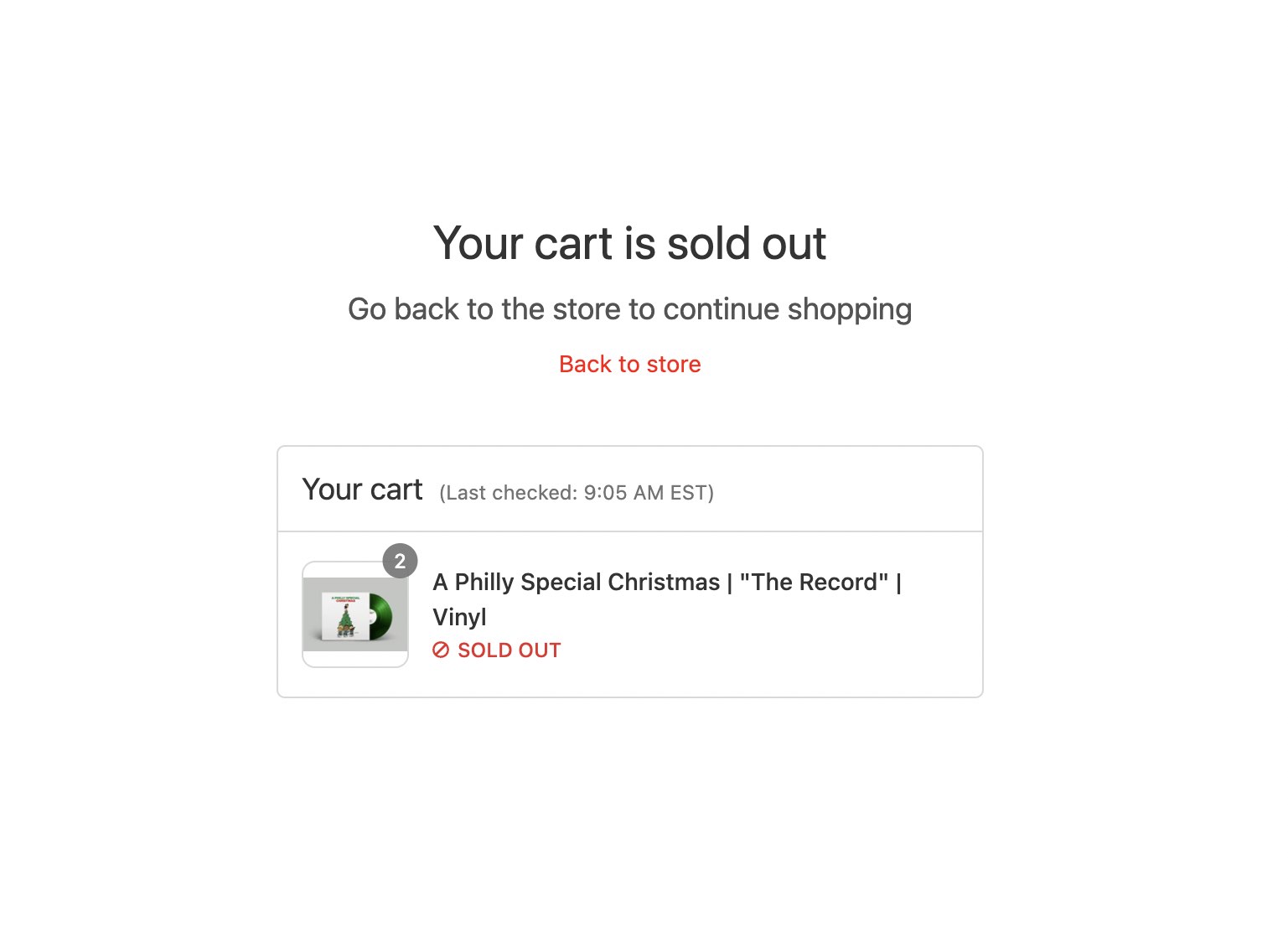 I went back to the website several times but it looks like I won’t be giving myself the Philadelphia Eagles Christmas album for Christmas this year. For the, er, record, I was going to auction off the second album for charity. Which is hopefully what some of the people charging exorbitant amounts on eBay (and more of them are about to do so, no doubt) will do, as the vocal coach for the Eagles singers suggested during our interview earlier this week.

Boy in the Box Dominates the News Cycle, But What About the Girl In the Box?

You’ve probably already read or heard a lot about the newly revealed identity of the Boy In the Box. If not, go read this piece in the New York Times. And be sure to check out the Inquirer‘s outstanding coverage, which includes the revelation that the case was basically cracked because somebody decided to take one of those at-home Ancestry.com DNA tests.

But what about the Girl in the Box? Have you ever heard of that case? In 1962, a young girl was found dead in a box in the Schuylkill River. And she’s been all but forgotten. Kudos to the Inquirer for bringing her back into the spotlight with this feature.

Could Our Homicide Numbers Be Inaccurate?

Just Who Is in Control in Harrisburg?

The election was a month ago. Democrats say they now control the Pennsylvania House of Representatives. But the Republicans say not so fast, because of course they do. They’ve even invoked the “I” word: insurrection. The whole thing may have to be resolved in court. More over at Spotlight PA.

The convenience store chain says it’s expanding into Kentucky, Ohio and Indiana. If they could just fix their soft pretzels.

And from the Finally Friday Sports Desk …

So this happened yesterday, thank God:

Moments ago I spoke to Brittney Griner.

Throughout the 10 months that WNBA star Brittney Griner spent in detention in Russia, Dawn Staley was one of her biggest champions. https://t.co/LlLFV9P9Ci

Welcome home, Brittney. In more hoops news, the Sixers head into a home stand tonight with a game against the Lakers at 7:30, while the Hornets visit at 6 p.m. Sunday.

Georges Niang is keeping a (very infrequent) diary about the season:

This season, Georges Niang is exclusively sharing first-person insights about his on-court and off-court life.

Read the latest edition of his Sixers diary ⤵️ https://t.co/7gm5ZyEv0S

In college hoops on Saturday, we’ve got Drexel at La Salle at noon, St. Peter’s coming to St. Joe’s at one p.m., Temple at Penn also at one, and Boston rolling into Villanova at five.

If you’re into ice-skating, South Jersey’s own Isabeau Levito is the only American competing in the Grand Prix Final this weekend.

And the Flyers are gonna Flyer.

All Philly Today Sports Desk coverage is provided by Sandy Hingston, because Victor thought “pinch hitter” was a reference to marijuana paraphernalia.