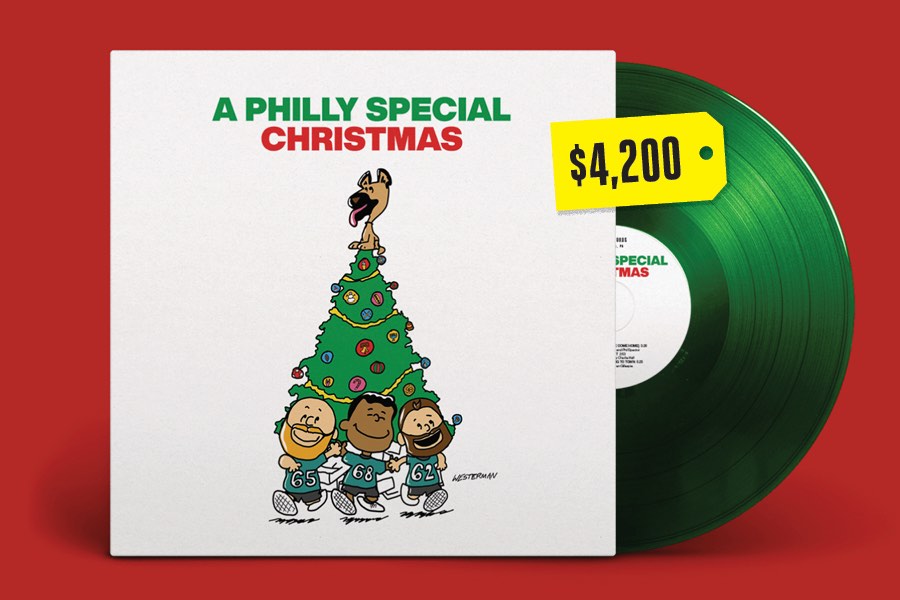 A mock-up of a $4,200 Philadelphia Eagles Christmas album, A Philly Special Christmas

Update 12/9: The second pressing of the Philadelphia Eagles Christmas album sold out in two minutes on Friday morning. For the full story, go here.

The New Eagles Christmas Album, A Philly Special Christmas, Is The Hardest Christmas Gift of 2022 to Find

I am a collector of Philadelphia ephemera. This means that anything weird, oddball or rare that has to do with Philadelphia, I want it. A 1931 edition of the Wanamaker Diary, filled out by a woman with wild handwriting and a, shall we say, particularly active social life? Got it. The Democratic Party’s anti-Frank Rizzo propaganda pamphlet The Sayings of Chairman Frank or: I Never Saw My Mother Naked? Yep. So when I heard that the Philadelphia Eagles were coming out with a Philadelphia Eagles Christmas album, A Philly Special Christmas, and on vinyl no less, I knew I had to have it.

Alas, I am, like many of you, left out in the cold without my copy, in spite of the fact that I know a few people involved with the project. (Thanks, guys. With friends like these…)

Unlike Philly Mag editor-in-chief Brian Howard, I did not manage to order my $75 copy of the Eagles Christmas album during the pre-sale before they sold out.

Then came the sales this past Saturday at the Eagles pro shops. There is a pro shop at Lincoln Financial Field, another in Cherry Hill, and another out in Lancaster County. The shops were selling autographed copies for $400. But it turned out that they were given very, very few copies to sell, according to an employee at one. He told me that they sold out of the Eagles Christmas album in under ten minutes, partially because they only had 15 copies to sell. “We had a very long line,” he said. “And a lot of disappointed fans.”

So what do you do if you want a copy of the Eagles Christmas album? Well, you could go on over to eBay, where somebody is trying to sell an autographed Philly Special Christmas for an absurd $4,200. Granted, that’s for an autographed one, but still. (That seller has no bids, whereas another seller has one up to $1,000 with three bids.)

But if getting an autographed copy isn’t that important to you and you just want the vinyl, I have good news: A second pressing goes on sale this Friday, December 9th. You can sign up for notifications about that sale here.

No word on whether the guys will be selling more autographed copies at any point in the near future.

This will be me at the bus top waiting for the kids today … too much? 😏 pic.twitter.com/jUmVhFgp58

ICYMI: The wife of Senator-Elect John Fetterman was born in Brazil.

If you visit certain countries, you may be surprised to find heavily-armed private security guards in front of clothing stores and other retail shops. I know I certainly was when I spotted my first Uzi-wielding security guard in Guatemala. But then I realized it was just downright commonplace.

Well, a Philadelphia gas station owner tells Fox 29 that things have gotten so bad in Philadelphia that he’s been forced to hire heavily armed security forces wielding AR-15s and shotguns:

The Return of the Mask?

Granted, some of you have never stopped wearing your masks. But having been out and about quite a bit over the last few months, it’s obvious to me that a lot of you have ditched them. On Tuesday afternoon, the head of the Centers for Disease Control is coming to Philadelphia to, in part, advise people to wear masks indoors thanks to the triple threat of COVID, the good ol’ flu, and those dreaded RSVs.

The Gift That Keeps On Giving

Your Comcast bill is going up. Again.

What’s With All These Private Law Firm Payments, Wolf?

Spotlight PA with a report on mysterious legal payments that Governor Wolf’s office has made over the years, and the Guv won’t explain why and has actively blocked news organizations from getting answers.

North Philly native Jill Scott hasn’t been around for a long, long time, in part because of ye olde pandemic, but she just announced two homecoming shows at the Met in March. Details here.

And those of you not pissed off at M. Night Shyamalan over the recent Rittenhouse filming chaos or the whole $5 million tax credit thing might be interested in the just-released trailer of the final season of his Apple show Servant:

And from the Oh-For-F’s-Sake Sports Desk …

The Sixers, in Houston for the last game of their road trip, jumped out to an early 10-0 lead last night two minutes in. The Rockets looked like they were underwater. James Harden was back!

No Georges Niang, but …

The Sixers were up 30-26 at the end of the first quarter. But the Rockets tied it right up, and the game seesawed back and forth until with 10 seconds left in the half, the Rockets were up 56-55.

In the second half, the Sixers tied it at 5:20 left in the third quarter as Tobias hit another three – that made five, tying his season high. The question we were all asking, though:

Houston led 86-81 with a minute left in the third. The Sixers were NOT taking care of the ball, and Joel had headed off to the locker room. Tobias hit a sixth three to make it a four-point game, but the Rockets were in the lead, 99-97, with six minutes left. There was, um, a great deal of unrest online.

Harris hit a seventh three for a new career high, and the fourth quarter went back and forth until with 44 seconds left and the game tied 108-108, Harden missed a jumper. Time out!

Harden grabbed the rebound on an off three by the Rockets with 14 seconds left and took a — well, a something.

With three seconds left, the Rockets missed their last shot, and we were going to overtime. Fuck my life.

Embiid, who’d returned, made a couple of key turnovers before fouling out of the game. “You expect the Sixers to be a little better executing down the stretch,” Alaa Abdelnaby opined. With the Sixers holding a one-point lead and 25 seconds left, P.J. Tucker grabbed a rebound, but …

embiid just throwing the ball away

Joel then fouled out with a hack on Kevin Porter Jr. And Rivers … well, he Rivered.

Embiid has his head in his hands on the bench after fouling out with 2.4 seconds left in OT. Doc Rivers has challenged the call.

Surprise! The foul call stood. Kevin Porter Jr. tied the game on a foul shot with 2.9 seconds left, then missed the second to leave the game tied. Alaa and Kate Scott just wanted to go home. Korkmaz inbounded, and Harden shot a three that wasn’t even close. Extra overtime! “Not what you want at the end of a road trip,” Alaa said. Or the end of a Monday. Second overtime! Tucker landed a three for his first — and only — points of the night. Great addition to the team.

With the Rockets holding a six-point lead with 2:30 left, I cut to Monday Night Football in disgust — just in time to see the Buccaneers’ Tom Brady toss a touchdown with seconds left to tie the game against the Saints. But! It was called back for an offensive hold. Back to the Sixers: Jalen Green hit two foul shots to make it 130-123 Houston, and Harden lost the ball AGAIN. “This is an especially bad one,” Alaa said, which was no lie. At least the pain was over: 132-123 Rockets.

I cut back to Monday Night Football, and motherfucking Tom Brady had just tossed a touchdown to win it. Goddammit, I hate sports.

In happier news, Philly was all atwitter about the Phils’ Trea Turner trade.

The Phillies got their man. Again.

Trea Turner, the Phillies’ top target all along in a free-agent market teeming with star shortstops, has agreed on an 11-year, $300 million contract.https://t.co/sbF12skFhh

If your idea of a football “Dream Bowl” is watching a bunch of Ivy Leaguers tackle the cream of Japan’s National Football Association, congrats! Your dream has come true!

Led by former Penn coach Al Bagnoli, a group of Ivy Leaguers will head to Tokyo in January to play an exhibition game against the Japanese National Football Association: https://t.co/kk12pXfmUC