Stop the madness. Plus, 78 degrees in the forecast and, of course, the shutout in South Philly. 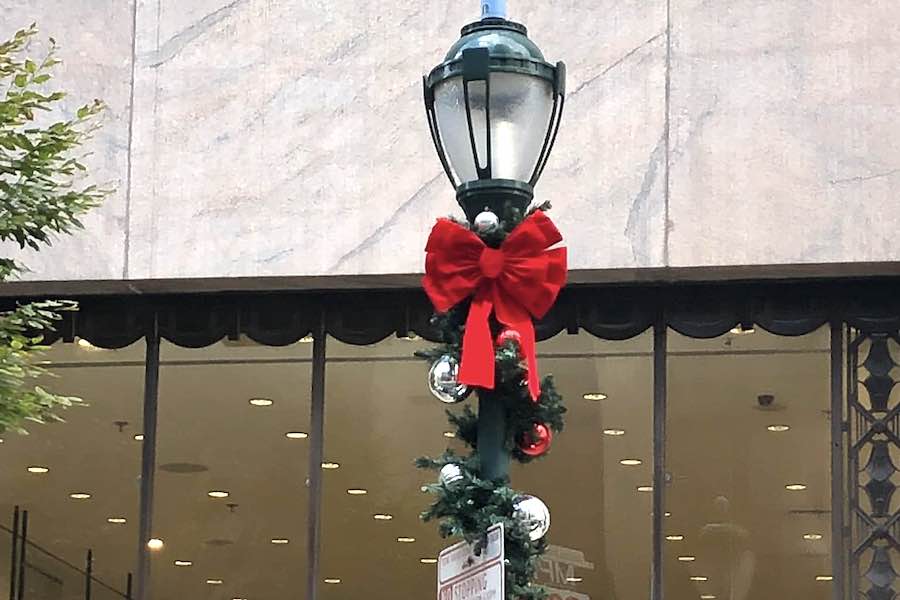 Check phillymag.com each morning for the latest edition of Philly Today. And if you have a news tip for our hardworking Philadelphia magazine reporters, please send it here.

Say It Ain’t So: Christmas Decorations Go Up In Center City in October

First, Halloween. Despite the rain, Philadelphia celebrated the ghoulish holiday.

Second, the aforementioned rain, which postponed the Phillies-Astros game from Monday to Tuesday. Annoying, yes. But in retrospect, the day of rest seemed to serve the Phillies well.

Third, Christmas decorations were spotted on the streets of Philadelphia, the ones seen above at the corner of 16th and Walnut.

I checked with the city to question this excruciatingly premature expenditure of what I thought were taxpayer dollars. But they squarely placed the blame on Center City District.

JoAnn Loviglio, spokesperson for Center City District, confirms that CCD is the perpetrator.

“First, the garlands are installed,” Loviglio told me. “Then the planters are changed out for winter and decorated. Our streetscape team expects to finish up the installation seven to ten days before Thanksgiving, which is similar to last year.”

It sure seems sooner.

Around the same time that I was looking into the early Christmas decorations on Tuesday, my colleague Sandy Hingston received an email from a marketing agency trying to push holiday songs by some boy band. “It’s peppermint mocha time!” squealed the publicist in their email. “No it’s fucking not!” Hingston insisted.

I know there’s absolutely nothing we can do to stop this fast-tracking of the Christmas holiday. But I think it’s important to let it be known: We don’t like it. Not one little bit.

And Now for Something Actually Seasonable

Wondering what to do with all those leaves? The city’s fall leaf recycling program has begun.

Maternity Clinic Scandal Makes It to the TODAY Show

If you haven’t heard about what happened at the Norristown Pregnancy Center back on October 6th between a Black pregnant woman and a white nurse practitioner, you’re going to want to read this.

TLDR: They should probably teach you in nurse practitioner school not to accuse a pregnant woman of fraud when she asks for a note to excuse her from work due to pain. And you should probably also not say: “What were you thinking about when you got pregnant? That you were not going to work? Because I had three kids. I worked up until the second they were born.” UGH.

Though Florida is a popular retirement destination for those from the Philadelphia area, a new U.S. News & World Report ranks two Pennsylvania towns, Lancaster and Harrisburg, as the top two best places to retire, above Pensacola, Florida. Of course, this is U.S. News & World Report we’re talking about. And we all know that their famous college rankings are questionable. And then there’s the fact that Reading, Pennsylvania somehow made it into the top ten. I dunno, man. Still, we like lists.

About Those Mail-In Ballots

We hope you remembered to date the outer envelope correctly. If not, it sounds like your vote will not be counted. The Pennsylvania Department of State says that if you think you might have made a mistake, call the state’s voter hotline at 1-877-VOTES-PA or check with your local county election board. In Philadelphia, go to Room 140 at City Hall or call 215-686-3469.

Meet the 17-year-old students determined to make sure their 18-year-old classmates vote on November 8th.

Yes, yes it does. Fortunately, that gives you more time to enjoy outdoor dining in Philadelphia now that the city has put the kibosh on those big outdoor heaters.

And from the Shutout-in-South Philly Sports Desk …

Dammit, it’s bad enough that the World Series folks won’t check the Eagles schedule when they’re reworking games. But they didn’t check my volleyball schedule, either, and I had to play last night! That meant I didn’t get to tune in until the fourth inning (though we did check the score between games). The Phils were up 4-0 by the time I got back in my car to drive home.

But there was plenty happening before the game even got off the ground. National League, tell us something we don’t already know:

Long before the game even began, Phillies fans were dressed to, uh, kill down at Citizens Bank Park:

The vibes outside CBP are incredible. pic.twitter.com/2KMcYPEzy5

Ranger Suárez was pitching for us, and Lance McCullers for the Astros. The Phils got things off with a bang: In the first inning, Schwarber walked, and Bryce Harper slammed a two-run homer. In the second inning, Alec Bohm and Brandon Marsh hit back-to-back solo homers. Marsh, btw, became the youngest Phillie ever to hit a homer in the World Series. (He’s 25, though he looks 85.). In the fifth inning, with Marsh on base, Kyle Schwarber whacked a two-run homer.

Bats a-popping! My big brother texted me from Maine: “Every time I’ve gone to the bathroom, they’ve scored!” He must have kept on drinking, because Rhys Hoskins followed that up with a solo homer. Lordy, it’s 7-0 Phils!

MY KEYBOARD IS STUCK IN ALL CAPS @Phillies

And that’s where it stayed. Connor Brogdon came in to pitch for the preternaturally calm Suarez in top of sixth inning and mowed his batters down, to be followed by Kyle Gibson, Nick Nelson and Andrew Bellatti in the seventh, eighth and ninth, respectively. They all got the job done. “I don’t even know why they have seats in this stadium,” Fox’s announcer declared right before the last strike. Hey, youse guys!

Phasinating Phact: No one has ever hit more than five homers in a World Series game.

Other things you don’t expect:

Other things you don’t expect:

Brandon Marsh, who got to know Japanese media well as a member of the Angels, does the post-game interview on NHK. pic.twitter.com/Gla3H5TkXC

Our Phillies play again tonight at 8:03. You see how convenient it is when all the games start at the same time?

The Sixers play the Wizards at 6 p.m. tonight at home. Joel Embiid may not be available again:

#Sixers center Joel Embiid is listed as questionable for tomorrow’s game against the #WashingtonWizards with an non COVID-19 illness. He missed Monday’s game vs. the Wizards with the illness that Sixers coach Doc Rvers believes are flu-like symptoms.