Of Teacups, Shared Trauma and Shared Destiny: Reflections on the Weitzman’s Reopening

What the new exhibits at Philadelphia's museum of Jewish American history — now with a new name — say about the moment we're living in. 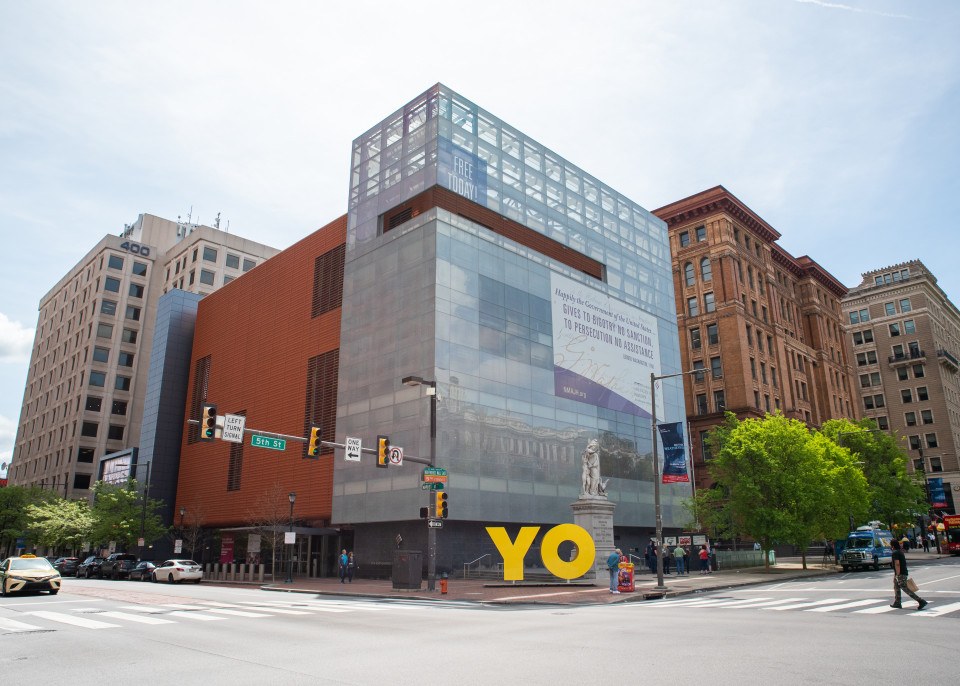 I shouldn’t be here. Decades before my birth, there were so many near-misses an ocean away, so many limbs cut from my family tree, only to have my parents meet unexceptionally at Temple University in the 1970s.

But isn’t that the start of so many Philadelphia stories? Nearly 40 years after my parents met there, after I enrolled, I was greeted by a banner proclaiming, “Temple University Welcomes You and Your Family.” So many lives intersect on that stretch of North Broad; cherry and white become a common denominator. My parents also shared some less common denominators with their peers, ones that definitely didn’t involve state institutions welcoming them and their families.

My sisters and I grew up with the gravity and gratitude that comes with being the children of immigrants. As a small child, I couldn’t point to Morocco on a map, but I knew it was why we drank mint tea alongside cayenne-spicy dishes, that it was where my mother loved walking her boulevard in Fez, lime blossoms crushing beneath her feet … smash-cut to “We can never go back.” I didn’t know what the Holocaust was, but I knew it was “important,” that my grandmother was somehow affected, and that then she, my grandfather and my father arrived at Ellis Island.

These are the kinds of hazy narratives you piece together on your own until you’re “old enough” to learn the details. In the meantime, you learn your alef-bet at Beth Sholom preschool but are also told not to mention celebrating Hanukkah to strangers while on vacation. Along with a sense of purpose, you inherit a sense of dread and shared trauma.

I shouldn’t be here. That is the fear that whispers in the ear of designated “others” when the latest in a parade of aggressions confirms our worst nightmares. The Tree of Life massacre, the rise in anti-Semitism and racism in the wake of Trump’s election, the murder of George Floyd … you feel tremors of the Beer Hall Putsch as you watch the U.S. Capitol besieged live on CNN. You hear the blood libel dog whistle echoed in QAnon conspiracy theories. You’re disheartened, but not surprised, when “Jews will not replace us” is chanted by white supremacists marching with torches in their hands. You are American, but not all Americans agree.

“You know the feelings of a stranger, for you were strangers in the land of Egypt.” (Exodus 23:9)

What makes someone an “outsider” is contextual and fluid — as an émigrée in France, my mother was maligned as pied-noir; in America, she passed as just another shade of white — but what we share are generational scars, the knowledge that some people may hate us simply for who we are. It is a shared trauma, but it is also a shared destiny, an entry point for empathy and common purpose. “One of the most significant things about anti-Semitism is that it’s the proverbial canary in the mine,” Misha Galperin, president and CEO of the former National Museum of American Jewish History, tells me. “When that happens in a society, it’s a sign of other ills.”

The museum — now the Weitzman, named after shoe designer Stuart Weitzman, whose gift to the museum helped it exit bankruptcy and establish an endowment — is reopening for the first time since COVID closed it in March 2020.

Of course, that in itself is news, so receiving a press release about it was perfectly usual. I scrolled through the materials, interested to see how the museum was reintroducing itself to its public (including free admission) and what was new. Despite the flashy and provocative pieces coming to the museum (more on those later), something much more mundane stopped me cold: a teacup. 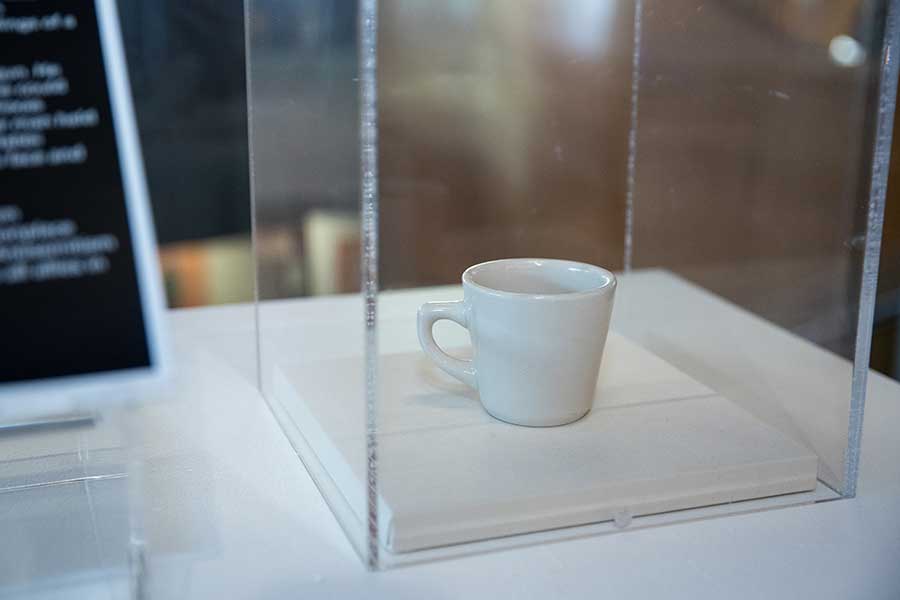 Teacup from the January 15th hostage crisis at Congregation Beth Israel in Colleyville, Texas / Photograph courtesy of The Weitzman

When Rabbi Charlie Cytron-Walker welcomed a stranger into his Colleyville, Texas, congregation one Saturday morning in January 2022, he made him a cup of tea, unaware that the stranger would later take him and three congregants hostage during Shabbat services. After 11 hours, Cytron-Walker threw a chair at the captor, allowing everyone to escape safely. That chair, and the teacup, are now part of the Weitzman’s artifact collection, displayed on the museum’s ground floor with video interviews of the hostages to contextualize the items.

During the Holocaust, my grandmother Mina and her sister were the only members of her family to survive, hiding in an underground bunker on a Polish farm for 21 months. During that time, she kept a diary, which she later donated to Yad Vashem in Israel. The poems and memoirs from those pages were digitized for inclusion in America’s own Holocaust museum, but something about seeing a picture of that little book behind glass, the edges nibbled by field mice, is unspeakably powerful. I felt the same way seeing that teacup. Quotidian items, revealing history in its physical form, take on almost mystical properties.

Galperin — himself a Jewish refugee, having come here from Ukraine as a teenager — tells me, “History tends to be cyclical,” with a knowing solemnity. For him, the resonance of those Colleyville artifacts, along with other new installations, is amplified by “the conversation” they have with the museum’s core exhibition. “Unless you know your history, you are bound to repeat it,” Galperin says. “But that’s an intellectual idea. Practically speaking, we have to bring people in based on where they are. … Museums are educational institutions, but they also need to entertain. People need to come and be engaged. And part of that is emotional connection.” 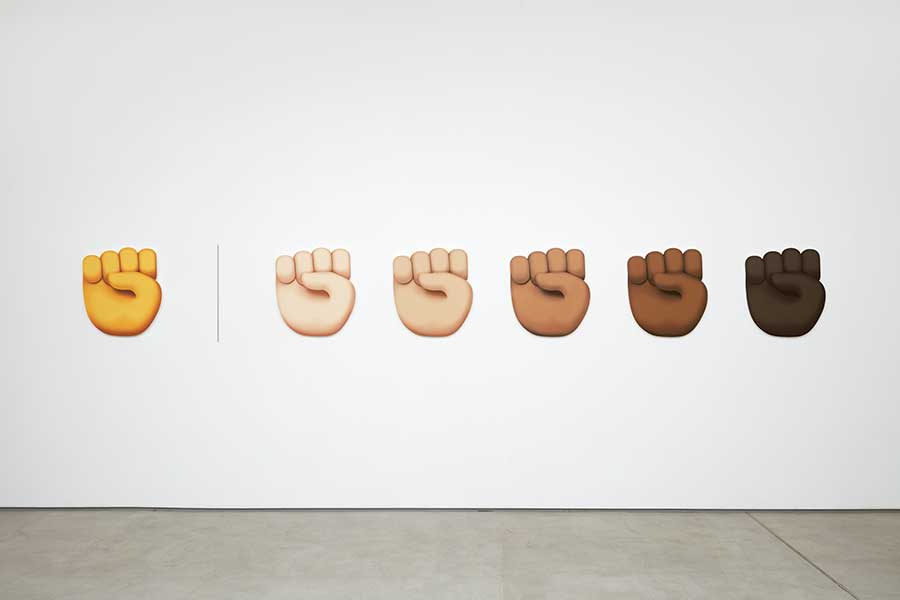 When you walk through the reopened museum, you’ll notice some unfamiliar artwork interspersed throughout the galleries: raised-fist emoji in various skin tones (the yellow “default” leading things off), a glittery rainbow-colored American flag, a tarp-covered behemoth. These are all part of Jonathan Horowitz’s new exhibit, The Future Will Follow the Past, which speaks to the upheaval that has transpired since the museum’s closure, addressing anti-Semitism, racism, sexism, xenophobia, homophobia and transphobia. The pieces aren’t placed in a separate “special exhibit” space; they’re more poignant in juxtaposition with the permanent exhibit, giving both a deeper meaning. That tarp, I learned, represents the statue of Robert E. Lee as it appeared, covered, after August 2017’s “Unite the Right” rally in Charlottesville. 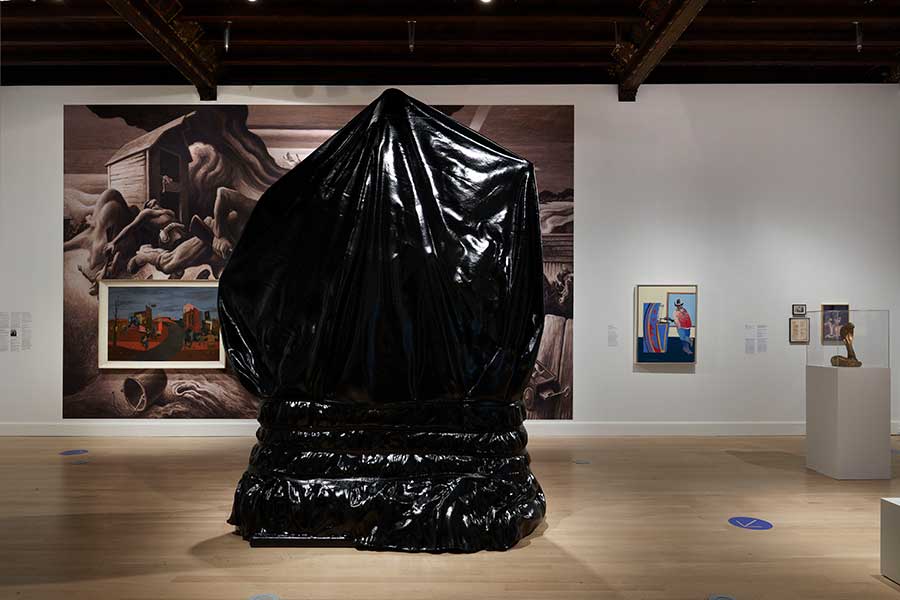 “Like the Weitzman itself, Horowitz’s installations emphasize how the story of Jewish life in America can serve as a starting point for exploring our connections and differences, participating in dialogue and debate, and sharing our lives and our dreams,” said Josh Perelman, chief curator and director of exhibitions and interpretation. Referencing the world’s collective traumas since 2020 — from COVID to Ukraine to renewed calls for equality — Galperin concurs: “Those are all issues that are relevant and for which Jewish history gives important examples and lessons.”

Likewise, Deborah Kass’s iconic yellow OY/YO sculpture, recently installed outside the museum, is more than just cheeky wordplay with Yiddish and Philly slang. Galperin explains that the sculpture was strategically placed in front of Moses Jacob Ezekiel’s Religious Liberty statue, commissioned and donated to Philadelphia by Jewish human-rights advocacy group B’nai B’rith in 1876 for the Centennial. The museum was interested in creating a dialogue between a 146-year-old statue and its contemporary new neighbor. “I created OY/YO thinking about the American promise of equality and fairness and our responsibilities to make the country a better place for all,” says Kass. “With hate and division now on the rise, it is urgent to see our commonalities, what we share, and what brings us together.”

The Weitzman National Museum of American Jewish History will reopen to the public on Fridays, Saturdays and Sundays from 10 a.m. to 5 p.m. starting May 13th. Admission will be free (donations welcome); advance reservations are recommended.