She's garnered national buzz for her "Elect Hoes" slogan. Her war chest is approaching $500K. She's been backed by former presidential candidate Marianne Williamson. Here's how she plans to unseat an incumbent who's been in politics longer than she's been alive. 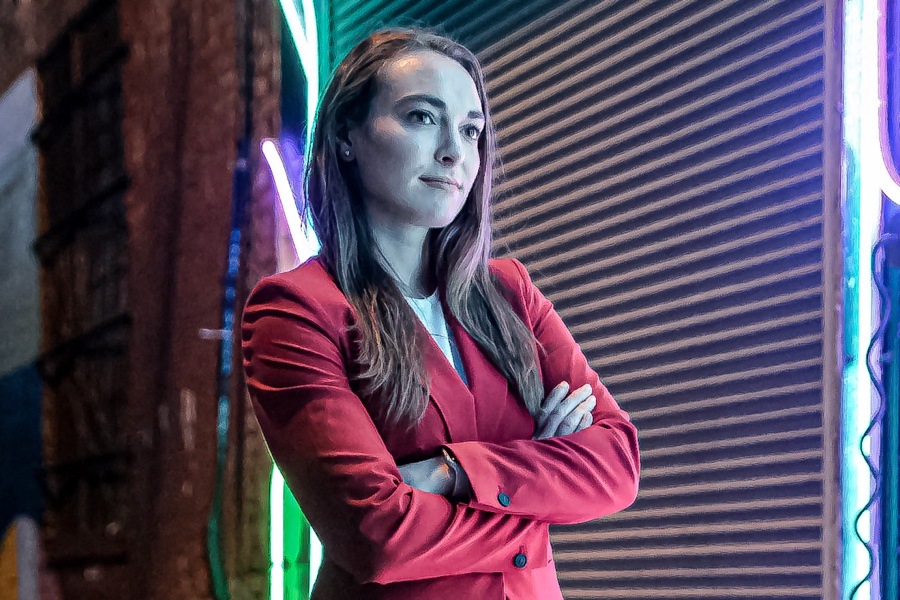 Alexandra Hunt, 28, is running for U.S. Congress in Pennsylvania’s 3rd Congressional district. She’s a brash millennial progressive who isn’t afraid to speak up about her fight against the Democratic establishment, her former work as a stripper, and why she’s the one to take on and beat longtime political powerhouse Dwight Evans. Her TikTok posts from the campaign trail tout the need for voters to “Elect Hoes”—a clapback at critics who’ve tried to shame her for her past sex work as well as a nod to the idea that other politicians are hoes of a different sort  —“corporate whores.” It’s won her the attention of the national media and the backing of former presidential candidate Marianne Williamson. Momentum is growing. She’s inching toward the $500,000 raised by Evans and got enough signatures to make the ballot within the first week of circulating petitions. Here, she makes her case to voters for why she is more than just an outsider with a buzzy viral campaign — and is someone to be taken quite seriously.

You’ve made a name for yourself very quickly during this election cycle as a transplant originally from Richmond, Virginia. What brought you to Philly, and what got you interested in running for Congress?

I originally came to Philly to pursue a master’s degree at Drexel University and have spent my entire adulthood in this city. Before I knew it, I had fallen in love with Philly and its deep-rooted community. People really show up for each other, we have a strong turnout for marches and protests, we know our neighbors, our community fridges are constantly being stocked, and there is a lot of mutual aid. But this love and sense of community is not being reflected in the style of legislation governing Philly or in the amount of resources coming to folks on the ground.

When the pandemic first struck, I was working at Fox Chase Cancer Center, and I immediately asked to flex my schedule so I could be out in the community, helping to get out relief. I was volunteering at testing sites, I handed out menstrual items, I was at food distribution sites, I helped escort our frightened cancer patients to their appointments, I operated as a medic/crisis responder at the encampment that formed on the Parkway — Camp JTD. My decision to run came at a food distribution site. The line of people who were facing food insecurity was too long. I had this thought of “They’re not coming to help us,” and my next thought was, “What are you waiting for?” And that was it. I started to look into this seat and found an incumbent who wasn’t fighting for us, and then I started building this campaign to run against him.

You’re a progressive candidate running on a platform that’s pushing to end mass incarceration, enforce a wealth tax, ensure Medicare for all, and get a Green New Deal passed, among other things. At a time when being a moderate Democratic candidate appears to be the safer route in Pennsylvania, what made you choose otherwise?

I’m running to win, but I won’t sacrifice my values and beliefs in the process. I’m running to put resources into this city. We don’t have time to play it safe — people are dying and suffering today. PA-03 is the most Democratic district in the nation, and there’s no reason it should be held by a moderate Democrat who is unwilling to take firm action in getting the resources we need or getting people-first legislation passed. This seat should belong to a progressive fireball, not someone representing the status quo as poverty and crises in Philly worsen.

Your incumbent challenger, Congressman Dwight Evans, is a longtime political heavyweight in the Commonwealth. He’s Black, he’s been in politics longer than you’ve been alive, and he is heavily backed by the establishment. How do you, a 28-year-old white woman and first-time candidate, make the case to voters that you’re the better choice in a predominantly Black district?

I’ve worked my way through college as a stripper, I’ve survived sexual assault, and I know what it’s like to need help but have the system fail to see or hear me. I’m running because I don’t want anyone in our community to be unseen or unheard anymore. Elected officials who’ve been in politics longer than I have been alive and who are backed by the establishment aren’t necessarily what the people of Philadelphia need more of. This district is extremely politically active and knows the policies that would change our lives. I’m running on them. I’m running on investing in communities and resources that will work to fix systemic inequality from the root causes. I’m running on my opponent’s political weaknesses — on universal health care, a Green New Deal, criminal justice reform, banning Congressional stock trading, refusing all corporate money.

My opponent has held public office for 42 years, yet Philly, to this day, is brimming with pain and poverty. It’s time for some new ideas and new representation in Philly. 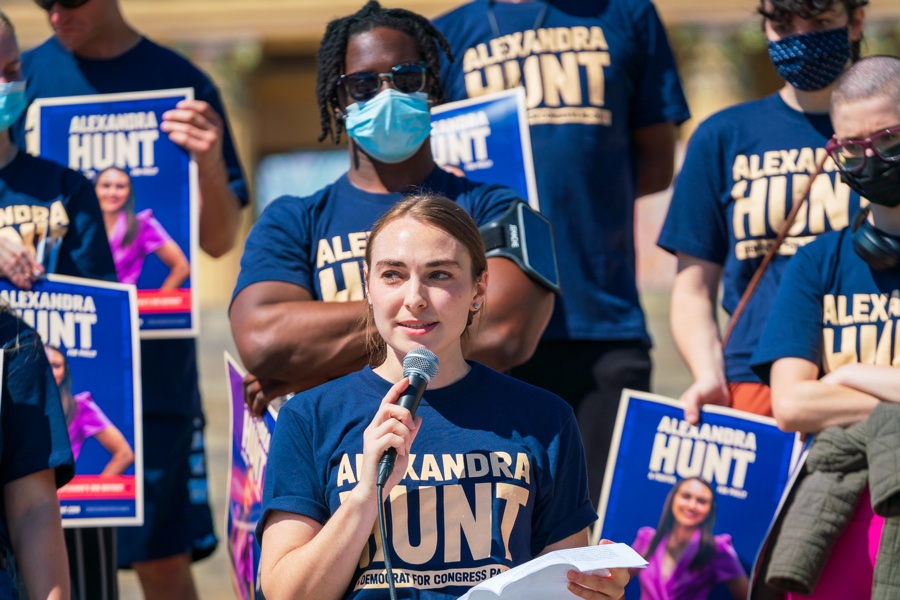 Alexandra Hunt at a campaign rally | Provided by Hunt’s campaign.

According to recent campaign finance reports, Evans has raised over $500,000 for his war chest. How are you currently shaping up financially?

As of last month, we’ve raised $415,000. We still have a lot of work to do, but I’m proud of how far we’ve come despite everyone’s doubts. The majority of my opponent’s money is corporate money, whereas 100 percent of ours is grassroots. We have more than 7,000 small-dollar donors, with our average contribution being $34. We are absolutely still an underdog, but a very determined underdog.

You recently announced that you’ve gotten enough signatures to make it onto the ballot and were endorsed by former presidential candidate Marianne Williamson. Do you feel the momentum growing?

The buzz on the ground has actually been pretty incredible. But as we have built momentum, the threats and intimidation tactics have increased as well. The people of this district should be able to decide in a fair election who they want for this seat, but some of the processes of the establishment in Philly are anti-democratic, and we must continue to point them out. For example, while collecting our first round of signatures, our volunteers continually got bullied. At one point, the police were called on us, but we stood our ground that this was our constitutional right. When the police came, they even said it was an attempt to bully us away and we indeed had the right to be there. Philly needs change. The establishment has not been working for the people. Dwight Evans’s own petitioner came up to me to let me know she’ll be voting for me because “Philly needs young blood.” While we’re still an underdog, we are willing to do what is necessary to stand up for the community. Our support is exponentially growing. And the genuine encouragement from the community has meant a lot to me.

So much national media attention has been focused on your previous occupation as a stripper, which you did to help pay the bills as a college undergrad, and your embrace of the slogan “Elect Hoes.” What has this buzz been like, and what do you want people to understand about sex work?

The “Elect Hoes” slogan has kind of become a symbol of resistance to the status quo, which it was not intended as originally, but it has definitely been thrilling to see. Of course, we have faced an onslaught of criticism, slurs, threats, and just gross commentary. But we have close to 2,000 people proudly rocking their “Elect Hoes” merch, and that support has meant a lot. A Philadelphian asked if we could put it on baby clothing, and that request actually made my eyes fill with tears, because we’re shamed so heavily for that slogan and the merch, yet our supporters are so awesome and shameless that they’ll even let their kids participate in supporting our campaign.

I could respond with an essay about what I want people to understand about sex work, but the gist is that people should understand: This is an issue of body autonomy and turning the power structure of the patriarchy on its head. It’s an industry with a supply and demand and a whole lot of stigma. People need to make an intentional effort to unpack their own biases towards sex workers and their clients. Sex work needs to be decriminalized, and sex workers need to have their human rights protected and restored, just like any other person.

The Democratic primary is roughly two months away, and a lot of attention has shifted to the state’s highly contested U.S. Senate and gubernatorial races. What are you doing to ensure that your race is the one the public should look at more closely?

We need to talk about the role PA-03 plays in statewide politics. This is the most Democratic district in the nation. In order for the Democratic Party to win statewide seats in Pennsylvania, they need a heavy voter turnout from these Democratic strongholds. In order to ensure a heavy voter turnout, you need to support the election of candidates who energize and mobilize their base. That’s exactly what our campaign is good at. Unlike the establishment, progressives are willing to do the work to increase energy and voter turnout, which helps all of the Democrats on the ballot. If our grassroots, people-first campaign wins the May primary and is on the ballot for the general election in November, we will continue building our momentum to help flip the Pennsylvania Senate seat blue and secure the gubernatorial election.