We find out why. 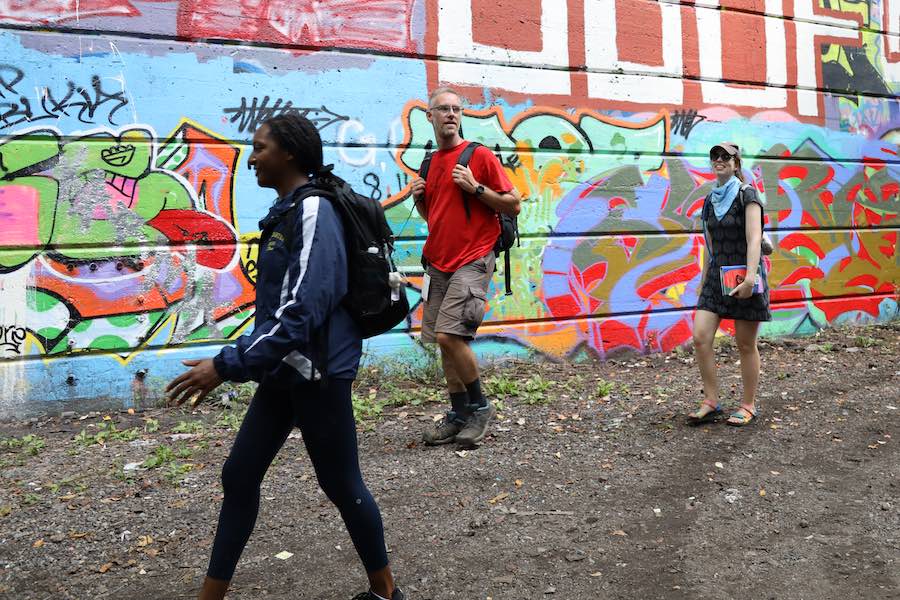 Given that the perimeter is more than 100 miles, he’s not taking this walk around Philadelphia in one day.

At around 3 p.m. on Saturday, after journeying along the western edge of town, up the strip-mall-lined Philadelphia side of City Avenue and through Manayunk, Tiziou will end the first 17-mile segment somewhere near the Schuylkill Center for Environmental Education.

He continues from that point on Sunday and doesn’t stop until he hits Fox Chase in Northeast Philadelphia. On Tuesday and Thursday, he does 22 and 20 mile segments, respectively, eventually winding up at South Philadelphia’s Pier 68.

The walk concludes next Saturday and Sunday, ending at Terminal A at the airport on Saturday and then going from Terminal B/C on Sunday, up through Heinz Wildlife Refuge, and into the neighborhoods that make up Southwest Philly. He’ll be back at the original starting point — 61st and Baltimore — by mid-afternoon Sunday.

Lots of concrete. Some lovely trails. A handful of dangerous intersections. It’s a route the 43-year-old West Philadelphia resident knows well. This is his ninth time doing it.

“It was one of the most joyous weeks of my life,” recalls Tiziou. “And the dates coincided with my birthday. I thought that I would maybe put this on the calendar as a thing I might do each year for my birthday. A personal pilgrimage. Time to reflect.”

And so he blocked off his birthday week in February 2017 for another walk around Philadelphia. But then his father became seriously ill, and Tiziou realized he’d have to cancel the 2017 walk so he could help out with his dad. Alas, his father passed away just before that birthday.

“After his life came to a close really suddenly, I realized I had nothing to do,” he says. “So I did the walk solo, and it turned into a sort of grief-processing event. I used the time to decompress and process what had happened.”

The following year, friends and friends of friends joined in on portions of the walk. Then he sent out the details of the next walk to all of his email contacts, and lots of people showed up for various legs. Then he upped it to two walks a year, a September walk organized in conjunction with the Philadelphia Fringe Festival, and it just grew and grew.

At this point, Tiziou isn’t exactly sure how many people have walked with him, but he says “several hundred” is a safe figure. For the walk that starts on Saturday, 70 people have signed up to take part in some portion. He says that’s basically all he can handle, but he’s set up a waitlist here in case there are cancellations.

Some people do just a few miles. Others do many. Some grab an Uber or Lyft back to where they need to go, while others take SEPTA. Tiziou provides easy-to-follow maps, route information and public-transit connections to all participants.

“If there’s one thing I’ve learned through all this, it’s a sense of humility and awe at the scale of this city,” Tiziou reflects. “Before this project, I thought I knew Philadelphia. But now I’ve recalibrated, and I know I will never know Philadelphia.”

I definitely get that concept for the first walk around Philadelphia, and maybe the second. But nine times? It’s starting to feel a little bit like my Aunt Norma, who has taken the same exact cruise to Bermuda the same exact week each year for more than 15 years, an analogy I suggested to Tiziou.

“There’s an element of adventure and mystery with each of these walks,” he countered. “I’ve never been not surprised. The city changes, day to day, year to year. If it’s sunny and warm, it looks one way. If it’s cold and rainy, another. Every time is completely different. … I’ve learned that you can never complain about being bored in Philadelphia. All you have to do is go outside. The city comes to meet you. And then magic happens.”