My Three Big Lessons From Our First Month of Marriage

After dating the love of my life for more than seven years, I was sure marriage wouldn't hit that differently. I couldn't have been more wrong. 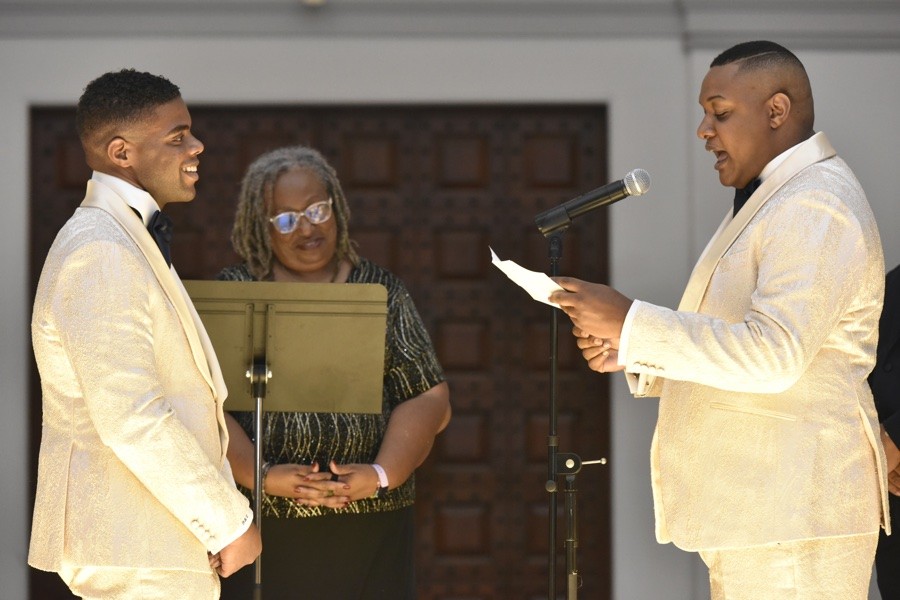 Ernest Owens (right) and his husband celebrate the start of married life at their October wedding at the Penn Museum. Photo by Ronald Gray

It’s been a full month since my husband and I said “I do” before our family and friends. To call our wedding phenomenal would be an understatement. It was truly the most romantic day of my entire life.

Our wedding became a cultural event, one that was celebrated on social media and featured in the New York Times. To be young, Black, queer, and married before the public at large felt monumental. I hadn’t previously seen such hype around a couple who looks like us in the Philly press. All of the kind letters, messages of support and positive vibes were inspirational to us as newlyweds, but also to countless others who don’t often see themselves represented in such moments of marital bliss.

Now that we’ve embarked on married life, everyone has been asking me: “How do you feel?” Fucking fantastic! Seriously, what else am I supposed to say? Perhaps the question some are really trying to ask is whether anything has changed since the big day. Since I’d been dating my husband for more than seven years, I didn’t think things would change much or quickly. In one sense, there haven’t been any environmental changes — we had already been living together and know our workflow patterns pretty well. But socially, I’ve developed a greater sense of self-reliance and have reprioritized my time, energy and focus.

Here are a few instant lessons marriage has already taught me.

You really have to think twice more often.

Before getting married, I was used to saying yes to every invite and/or event that worked for my personal schedule. Now, I immediately consider, “Umm, what if he already has plans for us?” or “Can this be a plus-one date?” Being a husband has made me realize that planning shouldn’t done in a silo. My husband and I are definitely checking in with each other more frequently to schedule date nights — and avoid bad surprises. And we’re learning new ways to communicate by sharing Google calendars and updating each other more frequently throughout the day when things change. It’s definitely been a pleasant adjustment, especially with someone you’re seeing every day.

But you shouldn’t feel obligated to do double-time all the time.

One of the biggest pet peeves I’ve had since being married is people always asking me, “Where is your husband?” Excuse me, I didn’t know I had a master and commander at all times. It was always important to me to have a healthy friend/family/marriage balance. My husband is my husband, and my best friends are my best friends. As we embrace the intimacy of being newlyweds, we also recognize the importance of having our space and our individual friendships. Not every event needs to be a date — some are for catching up with friends and co-workers. Our rule has been: Invitations to buzzy hangouts are for friends, while galas/formal evening events are for us. It’s been great to carve out separate space for these various interpersonal connections, because it makes for great pillow talk when we get home. A great friend once told me that the best marriages are ones that are close but not suffocating. I agree.

Your married life is yours, period.

“Are you all having children?” “Are y’all going to get a house?” “How are y’all saving for retirement?” These are some of the invasive, excessive and downright nosy questions we’ve been bombarded with from the moment we jumped the broom. I guess some people don’t think these kinds of inquiries are crossing the line, but let me say it now: It’s seriously none of your business. One annoying aspect of being a newlywed is all the oldly-weds and formerly married people offering you “advice” you didn’t seek. The constant emails and random phone calls from people who want you to know they’ve “been there and done that” are exhausting. One time, a formerly married man tried to tell me the age at which I should no longer consider having a child. (He said at 40 — I won’t be taking his word on it.) I nearly snapped (why are people so weird?!) but instead said to him, “My marriage is mine to navigate, thank you.” And this has been the response I’ve given to many who have gone beyond the pleasantries and started to pry. Creating a marriage that will be defined by us and for us is the most important goal we’re working toward. For those who want to know what that looks like, just wait and see.