Stop Judging People for Going to Outdoor Events. The COVID Mandates Are Working.

Made In America and other big summer music festivals weren't the epic super-spreader events many armchair experts predicted, thanks to the enforcement of vaccination and testing mandates. As we head into the fall, we should acknowledge the scientific breakthroughs and not be Debbie Downers. 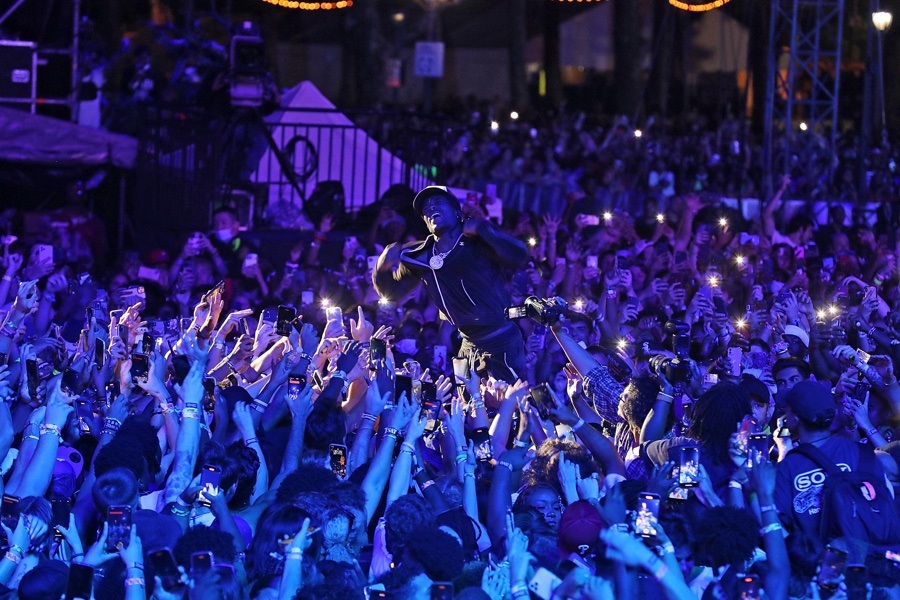 Lil Uzi Vert attends the Made In America Festival on September 4, 2021, in Philadelphia. (Photo by Shareif Ziyadat/WireImage)

As we all began to adjust to in-person gatherings this summer in the wake of vaccination requirements, I noticed a growing trend: social media doomsaying. Whenever a music festival or major public gathering captured the public’s imagination, predicting worst-case scenarios became a favorite Twitter pastime. It didn’t matter whether or not venues were enforcing strict COVID mandates — the specter of a large crowd triggered many Debbie Downers to presume chaos.

As we enter the fall, health experts are telling us to calm down and know the difference between “super-spreaders” and COVID-vaccine-mandated events, especially outdoors/indoors. A few major examples from this summer should serve as reminders to trust the science and not be consumed by fear.

In July, more than 385,000 people attended the four-day Lollapalooza festival in Chicago. As cases of COVID’s Delta variant began to spike across major cities, the forecast for the beloved music event was grim. People took to social media to shame the attendees and predict bad outcomes. I, too, was feeling a little anxious about the massive crowds. Although I would never go to such an event myself (I just can’t stand being smushed up with strangers in general), I didn’t think it was in good taste for the naysayers to predict doom.

But for all of the madness and negative predictions, Lollapalooza wasn’t the epic super-spreader event so many had expected. The reason? The music festival enforced a mandate requiring proof of vaccination or a negative COVID test no more than 72 hours prior to the festival. According to the Chicago Department of Public Health, two weeks after the event, of those who’d been vaccinated and attended, only .0004 percent reported testing positive. As for those unvaccinated attendees who’d provided proof of negative COVID-19 tests, only .0016% had subsequently reported testing positive. So it appeared those large crowds of thousands of music fans hanging out together weren’t so viral after all.

Earlier this month, similar fear-mongering came to Philly with the Made In America festival, which attracted over 50,000 attendees.

I wouldn’t be caught dead at the superspreader event that is Made In America, but it still cracks me up that they’re not even trying to be eclectic anymore. Mumble rapper after mumble rapper before one or two known headliners. I know I’m 36 going on 86, but Jesus. #SundayThoughts

Why in the world is Philly still having Made in America (aka Fall Superspreader 2021)?! To be fair, I’ve always loathed the distasteful event, but this year, my concerns are legit. Hello, covid has not left the chat.

Just like Lollapalooza, Made in America wasn’t the case-spiking event some people predicted, even as many news outlets reported that lots of attendees flouted mask mandates. Enforcing mandates similar to those at Lollapalooza (proof of vaccination or an even more recent — within 48 hours — negative COVID test) seems to have made an impact. This differs greatly from the scary spike in cases caused by the Sturgis Motorcycle Rally last month, an event with no testing, no masks, and no vaccination requirements. The massive risk isn’t worth the meager reward.

“We haven’t seen signs of spread from outdoor events like Lollapalooza or Made In America, but they had mitigation: vaccination or testing was required,” James Garrow, a spokesperson from the Philadelphia health department, told Philly Mag. “Any place can have some risk from COVID these days, but by only focusing on the risk of outdoor events, too many people are unaware that indoor events can be even more dangerous.”

One more time:  “mitigation via mandates appears to be making a big difference.”

Fall is the kickoff to flu season (go get vaxxed for that, too) as well as the beginning of colder weather. Taking that into consideration, I’m definitely not attending any autumn festivals, Halloween concerts, Thanksgiving parades, or other seasonal gatherings where mandates aren’t in place. Science is starting to show us that it’s okay to go back outside in groups, but with healthy caution and common sense (like still washing your hands, wearing a mask, and encouraging others around you to get vaxxed). But it’s time to recognize the difference between mandate-enforced events and the Wild West of everything else, just as we’ve seen the difference in being vaxxed and unvaxxed with regard to COVID risks.

“We told everyone that they were safer at home and to stay far apart from everyone else, no matter what,” Garrow says of both indoor and outdoor gatherings. “As we’ve learned more about this coronavirus, our guidance has changed and been updated to take advantage of the latest scientific knowledge. Today, we know that protective measures like being fully vaccinated, wearing a mask, good hand hygiene, and plenty of ventilation are the best ways to avoid catching and spreading COVID.”

Translation: Stop being a Debbie Downer, and trust the science — which is more optimistic than Twitter.