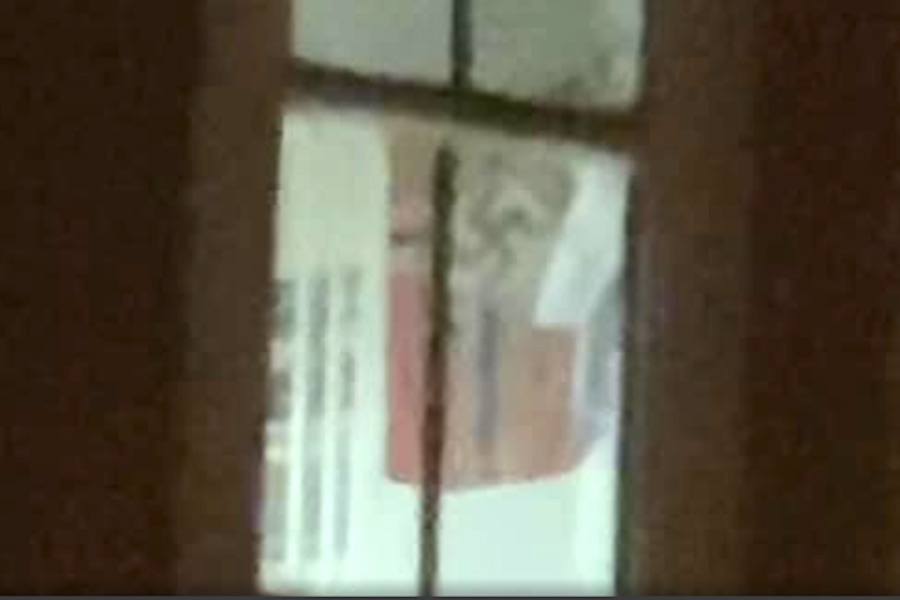 This photo, originally posted on Facebook, shows a glimpse of a Nazi flag through a window in Roxborough.

The flag had been spotted hanging in the window of a building at the corner of Lyceum Avenue and Pechin Street. And the young woman who saw it snapped a photo and posted it in the group.

Members of the 23,000-strong group had varied responses to the photo. Some demanded that the apparent neighborhood Nazi should be doxed immediately. There was talk of a protest, a demonstration, some kind of social justice action. And some people posted links to the FBI’s tip page, urging neighbors to share the flag photo and any information about it with the feds.

But the next day, a new wrinkle emerged: The large building at the corner of Lyceum Avenue and Pechin Street turns out to be the Roxborough VFW post. And the second and third floors contain wide-ranging displays of war memorabilia, according to a new Facebook post in the community group on Saturday by the daughter of the post’s commander.

Yes, there are Nazi flags on display. And yes, there are Nazi medals and other swastika-festooned objects in glass cases. But there are also relics, memorabilia and artifacts from pretty much every other military conflict involving American troops, from the Civil War and the Spanish-American War to World War I and World War II to the now-once-again-headline-dominating war in Afghanistan.

What the hell do you mean, we’re flying a Nazi flag?

That’s what Hugh “Bud” Sinnott, Roxborough VFW post member and former commander, told me went through his head when he heard about the uproar. “This is a 101-year-old veterans’ post!” Sinnott insisted. “Our members fought Nazis.”

According to Sinnott, some concerned citizen contacted the state’s VFW headquarters in Harrisburg. Then an official from HQ contacted a regional officer in Philadelphia. And that all trickled down to the leadership of the Roxborough VFW post.

“I couldn’t believe it,” Sinnott says. “But some people always need something to complain about.” Still, Bianco’s complaint seemed well-meaning and reasonable, given the lack of information available to her at the time.

“This is why we say that impact matters more than intent,” Shira Goodman, regional director of the Anti-Defamation League (ADL), told me when I asked her if the Roxborough VFW post had done anything wrong here. “It seems that in this case, the VFW is attempting to have some kind of educational value, but without the context, the explanation and sensitivity, well, this can result in exactly what happened here.”

Once word got out that the flag was part of a museum — granted, a museum that many Roxborough residents probably had no idea was in the neighborhood, considering there aren’t any signs posted outside indicating there’s a museum inside — the initial photo disappeared, and the original poster found herself on the receiving end of fellow social media users deriding her, the “libtards” and “cancel culture.”

Goodman advises the public to contact the ADL when they see something like this so the organization can properly investigate and intervene. It’s what they’re there for. She adds that it’s probably not a good idea to have an image like a swastika visible to passersby on the street. And if the VFW post is attempting to educate people, she says, it needs to do so in the right way.

“Why does this symbol persist?” she offers. “Why is it so powerful? We need to talk about its impact. And it’s important to learn the history, what this symbol means and why it carries that power. It’s a symbol that sends a clear message of hate. That’s why we see it drawn on synagogues and on houses and on desks in schools.”

Sinnott says the post regularly welcomes Scouts and other groups who “just want to see the old uniforms and weapons.” But he admits that the “museum” doesn’t include the kinds of explanation and context that a real museum would offer or that Goodman suggests are necessary.

“We just tell them what the objects are,” Sinnott explained.

“This sounds like an excellent opportunity for there to be a community conversation around this,” Goodman suggests. “There can be some joint work to make some real education happen.”

And it sounds like that process might be getting under way. On Monday, Sinnott told me he was welcoming a group of neighbors this week who had been part of the original social media thread, to let them see the second and third floors of the Roxborough VFW post for themselves and to voice any concerns they have.

“We’re going to have coffee and doughnuts,” he promised. “It will be nice.”