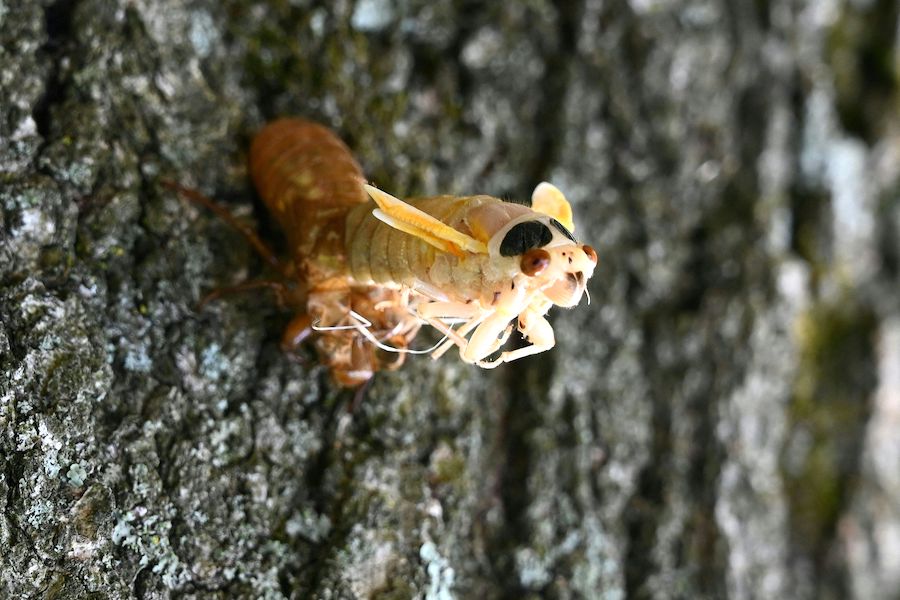 There’s been a lot of hype about Brood X cicadas in Philadelphia and elsewhere in Pennsylvania, but I haven’t seen one yet. So to find out what the heck is going on with these creatures that only pop up every 17 years, I called Brood X cicada expert Michael Skvarla, head of the Insect Identification Library at Penn State.

I’ve been waiting and waiting. Where are all of these Brood X cicadas?
Oh, they’re coming. They are inevitable. They are already in Maryland, Washington D.C. and Virginia in large numbers. We’ve seen individual ones emerge in Pennsylvania here and there. But you should have them in Philadelphia by this weekend, if not tonight.

Is this something we’ll see in the city itself, or more out in the suburbs?
They like to feed on tree roots when they are in the ground, so they will be most plentiful in parks and other areas where there are lots of trees. They love the woods. I don’t expect you would see them in the highly urbanized areas. But the funny thing is, they can be even lower in number in highly agricultural areas.

Really? I’d expect more rural areas to be covered in them.
No, because areas that have lots of tilling going on, where the soil is disturbed a lot, this can kill them. They take a long time to develop in the soil before they emerge, so if you till the ground, that’s the end of that.

So you mentioned that you have seen them in Pennsylvania here and there. I thought part of the whole scary thing about Brood X cicadas was that they emerge all at once in these giant swarms.
It was pretty cold last week and the week before that, so the soil wasn’t quite warm enough in parts. So when that happens, they might come out in dribs and drabs. There’s a long tail at the beginning, but then you will see a really heavy mass emergence any day now.

Meaning my backyard and the woods two blocks away are going to be humming?
Screaming! Actually, when the males first come out, it takes about a week after emerging for them to start calling. So you may have a little more time.

Once we get the Brood X cicadas in Philadelphia, can I flee to the higher altitudes in the Poconos?
Elevation doesn’t matter except in terms of temperature. The time for their emergence, again, is based on how warm the soil gets. They came out a week ago in Georgia. They’re coming here next. And I imagine you probably have a week or two before they hit the Poconos.

How long is this all going to last?
The adults really just survive for a few weeks. Long enough to find a mate and do their mating thing. And then the females lay eggs and die.

So am I still going to have to worry about this by the Fourth of July?
No. You should be safe. They’ll be done. Of course, as with all other things, there will be song stragglers. But you definitely won’t have that cacophony by then.

And that cacophony is really the main problem, right? We don’t actually need to fear the Brood X cicadas, do we?
No. Cicadas don’t bite. Cicadas don’t sting. They really don’t do anything except scream.

Will they crawl all over my campsite like those damn lantern flies?
No. They don’t really even fly around all that much. They’re awful at flying, which makes them good prey for birds. Once they come out of the ground, the go to the trees. And then they just scream and scream.

Clearly, they are not harmful. But are they at all beneficial?
It depends on how you define benefit. They are food supply for larger birds like crows and bluejays. Medium-sized birds and small mammals will feed on the nymphs. Plus, they eventually rot and then help feed the plants.

You mentioned them being part of the food supply for other life forms. I’ve heard some people say they intend to cook the cicadas and eat them. Any advice on that?
I haven’t eaten them. I was in high school 17 years ago when they came out. But I would like to try them. The trick is that you need to eat the ones that have just emerged. It takes a few hours for them to harden up. And I’ve heard that if you cook the ones that are new, they are just like soft shell crabs.

I’ll just have to take your word for that. So a month or so from now, this will be over and you won’t have anything to talk about. What then?
First it was the spotted lanternfly. Then last year, it was murder hornets all the time. It was all I was talking about all summer. And now I’m just talking about Brood X cicadas all the time. You know, it will be nice to just get back to the routine of identifying and dealing with all of the random insects that people find.