Good Morning AmericaTold Ala Stanford the City Named a Street After Her. It Didn’t.

The nationally televised gesture was essentially a publicity stunt. But recognizing the founder of the Black Doctors COVID-19 Consortium is still a great idea. Here’s what needs to happen to make it a reality. 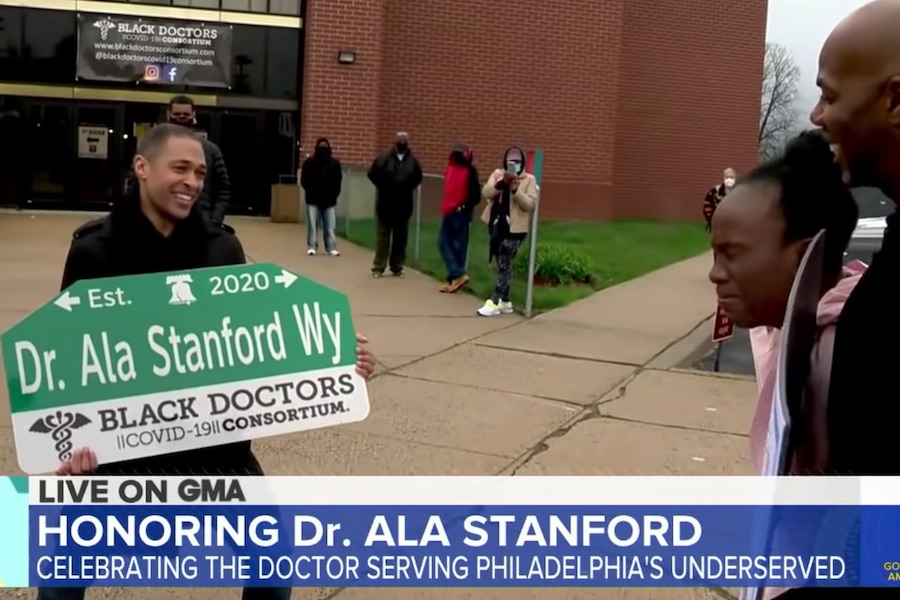 Ala Stanford seemed really surprised on Monday morning when Good Morning America presented her with an Ala Stanford street sign, telling her that a North Philadelphia street was being renamed in her honor. And we were really surprised too, since this was the first we were hearing of this, and normally a street renaming requires a more public process.

The reason we hadn’t heard anything is because there’s not an Ala Stanford street in Philadelphia just yet. In fact, it hasn’t even been officially proposed.

Stanford, who has cemented herself as a local hero thanks to her tireless efforts with the Black Doctors COVID-19 Consortium, thought she was taping a Good Morning America segment for a future airdate. But that was just a ruse.

The nationally-televised segment was actually a live broadcast featuring Good Morning America personality T.J. Holmes, who paid tribute to Stanford’s work. Patti LaBelle made an appearance. Holmes presented Stanford with a $10,000 check from the Verizon-owned company Visible. And then there was that street sign.

“The City of Philadelphia is doing something as well,” Holmes told Stanford outside the vaccination site at North Philly’s Deliverance Evangelistic Church. “This neighborhood that you have helped so much, you are getting your own street here in this community, dear lady. This is real. This is an actual street sign. And it is actually going up in this neighborhood.”

Holmes handed the street sign to Stanford. She wept. It was a beautiful moment. (You can watch it below.) But it wasn’t, technically, true. (A Good Morning America spokesperson did not immediately respond to our request for comment on the discrepancy.)

According to Kevin Lessard, spokesperson for Philadelphia mayor Jim Kenney, “the street renaming was presented as a ceremonial gesture” and there are no current plans to name a street in her honor. In advance of the segment, Good Morning America producers reached out to the city, asking if there was something special that could be done on camera. The city’s Office of Special Events got in touch with the Streets Department, which makes street signs. And, voila, the Ala Stanford street sign prop was begat.

But currently, the sign is just that – a prop. Which is too bad, because a street named after Ala Stanford would be a fitting tribute to her dedication to the city.

There are two types of street “renaming” in Philadelphia, but only one of them technically counts as renaming. Actual renaming is quite the process and can take a very long time, as was the case with Martin Luther King Drive (formerly West River Drive) and Cecil B. Moore Avenue (formerly Columbia Avenue). These types of renaming are few and far between.

Then there is the ceremonial renaming, in which a smaller red sign bearing the honoree’s name is placed beneath the actual street sign. Take the Patti LaBelle sign on Broad Street, for example: 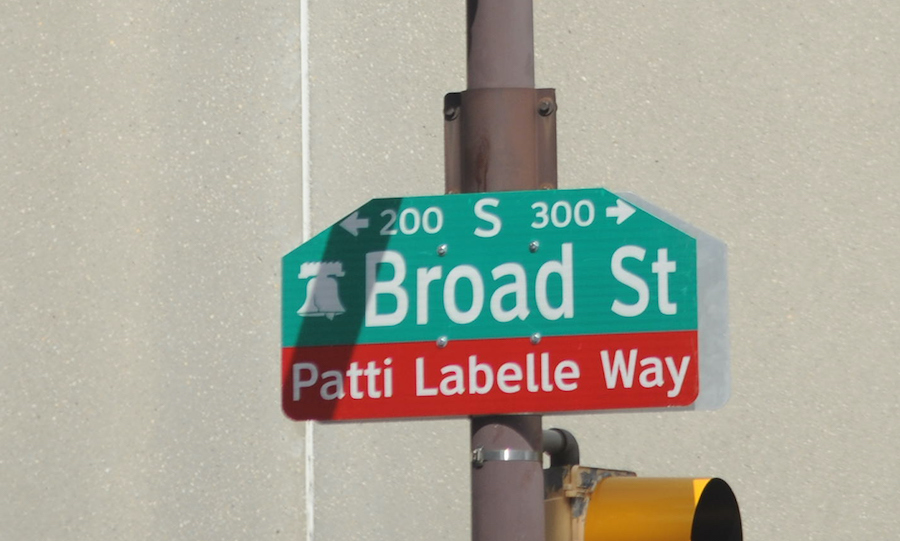 If you look up as you stroll around the city, you’ll notice that there are many, many ceremonial street renamings, many for people you’ve never heard of.

Either way, renaming a street starts with City Council.

Usually, the way it works for ceremonial renaming is that community members approach their local councilperson to start the process. The councilperson’s office seeks community input. Then, the councilperson proposes a resolution to the rest of City Council. These resolutions are almost never rejected. Once the resolution is adopted (this generally happens a week or so after the proposal), the Streets Department creates one of those little red signs and it goes up.

So which one of you fine councilpersons is going to be the one to raise your hand to get the official credit?