The Strange Philly History of the Monopoly Board Game

What started as a socialist parable turned into a capitalist dream, thanks to a little light theft, repackaging, and some brisk sales at Wanamaker's. 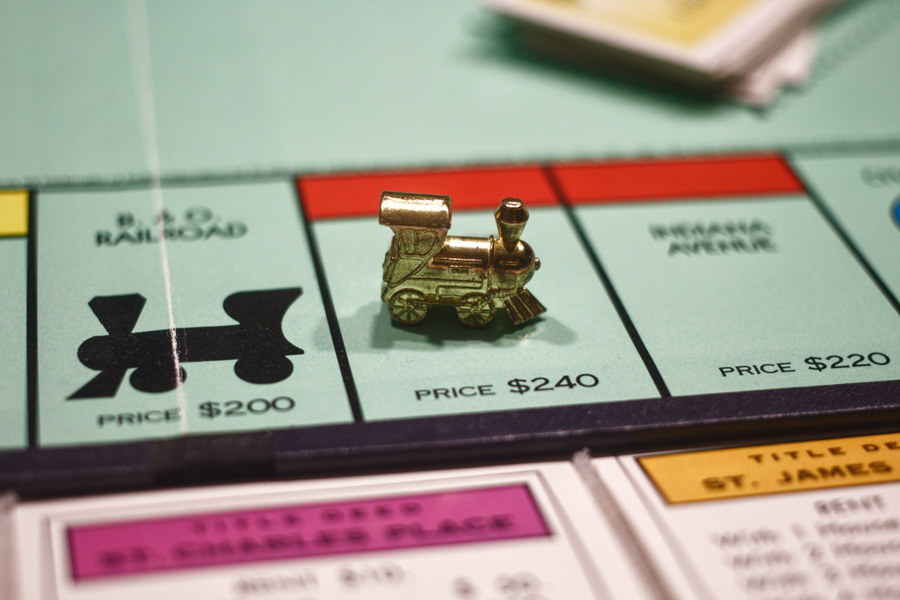 Photograph by Joshua Hoehne on Unsplash

In the wake of the Great GameStop Rebellion, which pitted the proletariat against their hedge-fund oppressors, it’s worth hitting pause to reflect on the peculiar origins of what may be the world’s favorite board game: Monopoly, brainchild of an unemployed Germantown native, Charles Darrow, who would become the first game inventor ever to become a millionaire. Shades of Rich Uncle Pennybags!

Except — oh shucks, not. The history of the ultimate capitalist pastime is a lot more complicated than that rags-to-riches tale. Here’s a quick breakdown, in honor of February 7th, the date on which the first game was sold more than 85 years ago.

1. Darrow’s game is generally considered a successor to one invented by Elizabeth Magie, a typist at the Dead Letter Office in Washington, D.C., and patented in 1903 — when less than one percent of all patent applicants were female. Hers, known as The Landlord Game, came with two sets of rules, intended to instruct players in the theories of anti-monopolist Henry George, who advocated for the wealthy to pay more taxes (sound familiar?). Played by one rule set, the game rewarded all the players when wealth was created; played by the other, one winner crushed all other comers. Naturally, the second set proved more fun.

2. The Landlord Game became popular among certain progressive groups, including college students (at the Wharton School, professor Scott Nearing used it to indoctrinate his students into socialism) and a group of Quakers living in Atlantic City. Players would create homemade versions based on their own surroundings; the Jersey Quaker board featured Atlantic City sights like the Boardwalk and Park Place. And Atlantic City was where Charles Darrow first played The Landlord Game, at the home of friends. The unemployed engineer asked for a copy of the rules, took them home, and set about tinkering with the layout of the board, though he did retain the A.C. street names — including a misspelling of Marven Gardens.

3. With the help of a son and his wife, Darrow hand-drew and hand-painted the oilcloth boards and drawing cards for his game, then hired a graphic artist to design some of the famous elements, like the “Go” arrow and the Water Works faucet. He packaged these games in flat white boxes and offered them for sale at John Wanamaker’s department store, where they did well enough that other emporia took notice.

4. Darrow dangled the game in front of Parker Brothers in 1933, but the company famously rejected it, declaring that it was “too complicated, too technical” and “took too long to play,” which — you know, who’s gonna argue with that? Armed with bang-up Christmas-season sales, though, he offered it again in 1935, and this time, the game maker bit. Darrow’s capitalist version of The Landlord Game sold 278,000 copies in its first year and almost two million the next. (Increased leisure time and newfangled electric lighting had spurred the popularity of board games nationwide.) Parker Brothers bought out the rights to several similar games, including that of Elizabeth Magie, who was paid $500, with no royalties. She hoped the new game would disseminate George’s theories more widely. Oops.

5. Marvin Gardens and all, the game has become a worldwide best-seller, with versions marketed in Russian, Cantonese, Italian, French, Portuguese, Spanish and many more languages, with boards tailored to foreign locales. (Parker Brothers was bought in 1991 by Hasbro.) Neiman Marcus sold a chocolate version of the game for $600 in 1978; an iPhone version debuted in 2008. Interesting note: During World War II, the British intelligence service secreted money, maps, and metal “escape instruments” inside Monopoly games sent to prisoners of war.

6. In the 1990s, Jerome P. Jacobson, chief security officer for the company that made game pieces for McDonald’s promotions, engineered a scam in which he sneaked into airport men’s rooms to avoid a woman auditor assigned to guard him, switched out winning pieces in the corporation’s Monopoly game for regular ones, passed the winners on to friends and acquaintances (and, in one case, Jude’s Children’s Research Hospital), and netted a cool $24 million before the FBI finally caught up with him. His story was made into the HBO documentary McMillion$, which premiered in 2020. Karma’s a bitch.