Her lawyer calls the charges "ridiculous". Hazelton was released on bond. 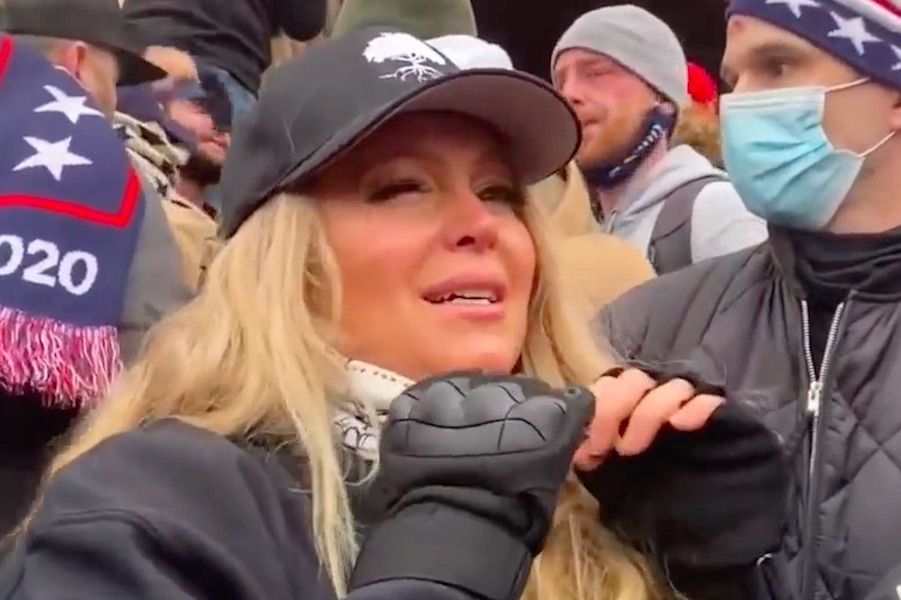 It was only a matter of time for Stephanie Hazelton, the South Jersey woman known previously to Philly Mag readers as one of the loudest supporters of Atilis Gym, that Bellmawr business that refused to follow New Jersey Governor Phil Murphy’s shutdown orders and that has raised more than $468,000 (and counting) in legal defense funds for its efforts. Now it looks like Hazelton could use a bit of that cash for her own legal fees.

Hazelton has been charged with three counts stemming from her presence at the Capitol that day:

In a court document, the FBI says that it has reviewed two videos of Hazelton.

One is the video we previously showed you, which appeared to have been shot by far right Internet outlet Just Another Channel. That’s the one that depicts Hazelton ushering rioters up the steps of the Capitol.

The other video, alleges the FBI, shows Hazelton (at approximately 4:06) not on the steps but inside a tunnel entry into the Capitol. That video depicts a mob trying to force its way past law enforcement in riot gear and through the doors of the Capitol,

In addition to tips from the public about the identity of Hazelton, the FBI also got an assist from New Jersey State Police. A major with the New Jersey State Police saw the video of Hazelton on the steps of the Capitol and identified her to an FBI agent, explaining that he had interacted directly with Hazelton during several protests in Trenton. Hazelton, who is also known by the aliases Ayla Wolf and Ayla Wolfe, has helped organize protests against New Jersey’s shutdown orders and is active in the anti-vaxxer movement.

She was released on a $100,000 unsecured bond, co-signed by her husband. As part of the conditions for her release as she awaits further court proceedings, Hazelton is banned from stepping foot on any government property unless she’s invited.

“After winning an important early victory in securing Stephanie’s pretrial release, we will continue to vigorously contest the ridiculous charges brought against her, a homeschooling mother of two special needs children who loves her family and her country immeasurably,” says Daryl Kipnis, Hazelton’s attorney, who is also a failed 2018 Republican congressional candidate in New Jersey. “The charges appear to be based on a fantastical misinterpretation of words that my client is alleged to have said in a YouTube video that simply does not comport with reality.”

Kipnis went on to say that Hazelton “deeply regrets” the violence seen at the Capitol on January 6th and insists that she had nothing to do with said violence.