Fearful of being shorthanded during a second wave of COVID-19 patients, nurses at the Langhorne hospital went on strike for two days this week. Caregivers at other Philly-area hospitals have similar concerns. 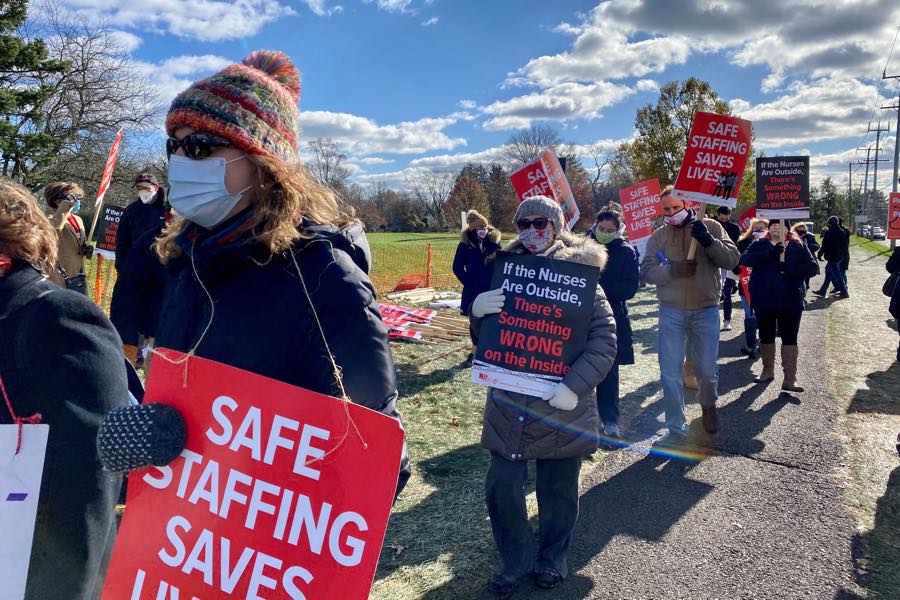 “I’ve wrapped more bodies, done more postmortem care on patients in two months than I did in 42 years,” says Jim Gentile, a 64-year-old nurse at St. Mary Medical Center in Langhorne. He was talking about last spring and the first wave of the pandemic, when he was working night shifts on a COVID-19 wing of the hospital. Gentile’s patients were elderly and infirm, too weak to be placed on ventilators. One of the few ways to help them breathe was to periodically “prone” them, a painstaking process that involves turning a patient onto his or her stomach, often requiring the help of as many as three other nurses. All told, proning can take half an hour. But because nurses were responsible for so many coronavirus patients, time they spent helping one patient was time during which others were left unattended. Once, after Gentile finished proning a patient, he found that another had stopped breathing entirely.

This was what it was like to be on the front lines of the pandemic — working constantly, frenetically, with too many sick patients and not enough nurses. “In the beginning, I’d drive home from work and bawl my eyes out,” Gentile says. Death on that scale was horrible enough; knowing that people had died alone because there weren’t enough staffers simply to be by their sides was even more devastating. “Maybe we couldn’t have saved them,” Gentile says, “but we could’ve been with them.”

Months later, the nurses at St. Mary Medical Center are once again sounding the alarm that they’re understaffed and that with cases rising in Philadelphia and across the state, the hospital could be on pace for a repeat of the spring. This week, hundreds of the hospital’s nurses, who are in the middle of stalled contract negotiations over wage and staffing standards, went on strike for two days. 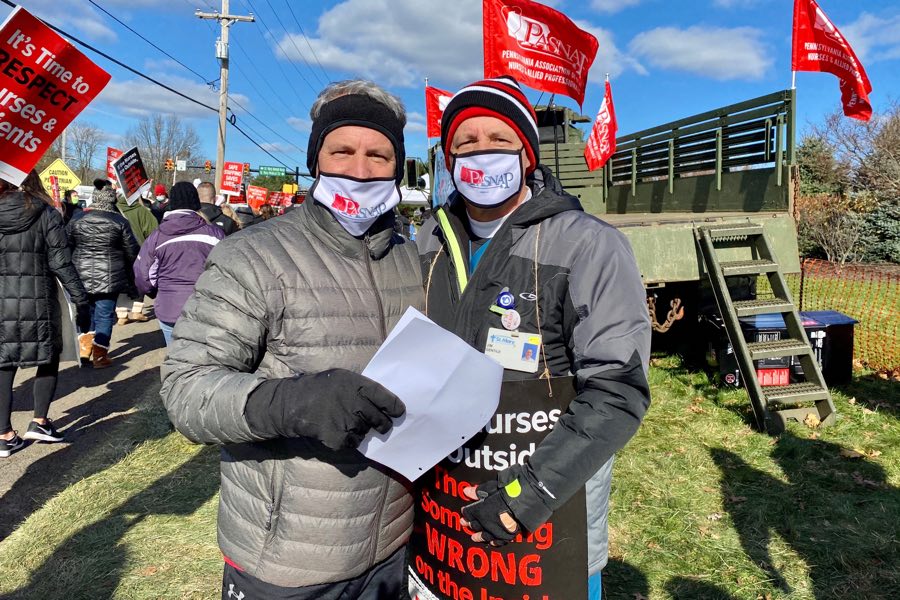 The nurses at St. Mary have claimed that hospital management isn’t giving employees enough say in staffing decisions and that nurses are often required to care for more patients than is safe. (Normally, Gentile says, a safe ratio for coronavirus care is about one nurse for every two patients; at times in the spring, he was responsible for four.) In addition, the nurses argue that the hospital’s poor wages keep it from maintaining ample staff in the first place. In the past two years, according to the Pennsylvania Association of Staff Nurses and Allied Professionals (PASNAP) — the union representing the St. Mary nurses — more than 240 nurses have left the hospital, usually for jobs at nearby hospitals that pay up to $7 more per hour. The nurses say the hospital’s owner, Trinity Health, a Michigan-based conglomerate that operates more than 90 hospitals across the country, has the money to afford raises. In 2018, St. Mary alone reported $48 million in profit.

In a written statement, a Trinity spokesperson noted that in that two-year period during which 240 nurses left St. Mary, the hospital hired more than 260 new nurses. In addition, the spokesperson added, the hospital has offered “generous wage increases along with fair provisions and benefits, which the union has chosen to reject without allowing their members to vote on them. … The hospital proposed progressive contract language that offered St. Mary nurses a voice in staffing and an opportunity to meet and discuss the hospital’s staffing guidelines.” 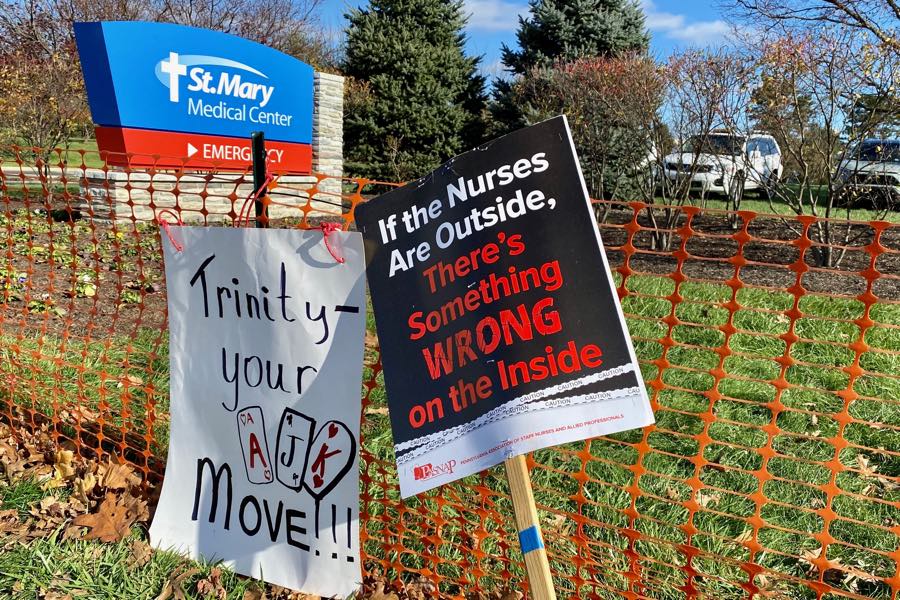 The two-day strike marks the latest escalation in a drawn-out negotiation over the nurses’ initial union contract with Trinity. (The nurses first joined PASNAP in August of last year and have been negotiating ever since.) Adding to the rancor, Trinity has hired replacement nurses to work through Sunday, even though the regular workers voted to strike for only two days — Tuesday and Wednesday of this week — and say they’re ready to go back to work now. That’s not possible, according to a Trinity spokesperson: “The contract with the replacement nurses’ agency guarantees them five days of work, and reinstating the St. Mary nurses cannot be accomplished overnight. It took several days to transition care to the replacement nurses we have hired, and it will take several days to transition patient care back to striking St. Mary nurses in a safe and orderly way.”

The unrest at St. Mary is percolating among other hospitals in the Philly area. Nurses at Einstein Medical Center — another hospital that was  hard-hit during the first wave and had massive trouble procuring PPE for its nurses — and at St. Christopher’s Hospital were also mulling strikes this month amid stalled contract negotiations. On Friday, Einstein came to an agreement with the nurses, averting a work stoppage, but St. Christopher’s nurses still haven’t ruled out the option.

PASNAP, which represents nurses at all three hospitals, insists that contrary to what hospital management has suggested, the threat to strike was never about strategic disruption in the face of a pandemic. The point of the work stoppage, says PASNAP president Maureen May, herself a nurse at Temple University, is to ensure that the chaos of the first wave of the pandemic doesn’t repeat itself this winter, as well as to let the public know that absent a change, there’s a legitimate chance the earlier nightmare scenario could recur. “We’re taking the brave step to step aside for couple of days,” May says. “That’s why we’re here, outside — letting you know. Trinity needs to pay attention and put the resources in care.”

Gentile, who wasn’t even a supporter of the union when the campaign first got under way, says he now fully supports the strike — the first of his career. “This was the only way that we could have a voice,” he says. During the first coronavirus spike, he adds, “We threw everything but the kitchen sink at this, and you know what? We failed.” With case counts rising and hospitalizations lagging not far behind — St. Mary’s has seen a 30 percent uptick in patients in the past week, and statewide, more patients are currently hospitalized with COVID-19 than in the spring — Gentile and the other nurses are emphasizing that they could soon be in the same unthinkable position they were in eight months ago. “I don’t think we’ll see the same mortality,” Gentile says of the impending wave, citing the suite of therapeutic treatments now available. But the staffing stakes remain high, and Gentile has a simple request: more nurses. “If we get enough nurses,” he says, “people won’t be dying alone.”