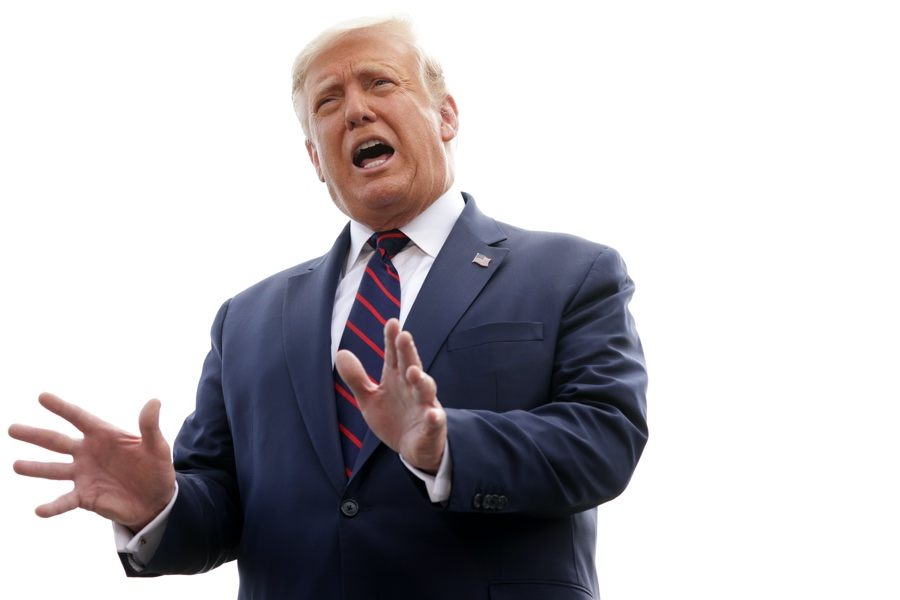 President Donald Trump speaks to members of the press prior to traveling to Philadelphia to participate in an ABC News town hall event. (Photo by Alex Wong/Getty Images)

On Tuesday evening, President Donald Trump appeared here in our city, where the founding fathers he’s so fond of proclaimed the existence of truths that are self-evident, and … well, he laid an egg. Not only did his touted ABC Town Hall draw fewer viewers than NBC’s America’s Got Talent, the NBA playoffs, and Fox News’s regular prime-time programming. His reception on this rare excursion outside the bubble of his followers was less than warm. The man who posed the first question, Bethlehem’s Paul Tubiano — “Why did you throw vulnerable people like me under the bus?” he asked in reference to the pandemic — later told CNN’s Brian Stelter that the President “didn’t answer anything. He was lying through his teeth.” Philadelphia pastor Carl Day, who asked Trump when America has ever been “great” for Black people, told Stelter, “I don’t feel like he adequately answered it, but essentially in doing so, he actually did.”

That’s how it went for Trump for 90 long minutes in which ordinary citizens from a range of backgrounds posed heartfelt questions and the President prevaricated, blustered, misrepresented, misunderstood, misspoke, and generally made a catastrophic showing. (“Usually when someone gets beat up that much in Philly,” Jimmy Fallon summed up, “they get sent to stay with their auntie and uncle in Bel Air.”)

There was something almost poignant in watching the President sit, in his odd hunched fashion, and take questions from the widely distanced guests (while moderator George Stephanopoulos tried haplessly to keep him on, or even near, point). The set, in the National Constitution Center, emphasized the peculiar isolation that has marked his term in office. If the guy were only marginally likable, we would have felt sorry for him. But he’s not, and he’s been a disaster for our nation, with 200,000 men, women and children dead thanks to his incompetence (and the astonishing collusion of his enablers). It was fitting that his pitiful performance took place here in Philly, where a set of other ordinary citizens, 244 years ago, willed the Great American Experiment into being. Here’s hoping that despite the forces of stupidity and evil and hypocrisy (hello, Mitch McConnell!), it somehow prevails.