“I’ve never been so nervous in my life,” says Swarthmore restaurateur Scott Richardson, who regrets voting for Trump in 2016. “I didn’t do as badly as I thought I did.” 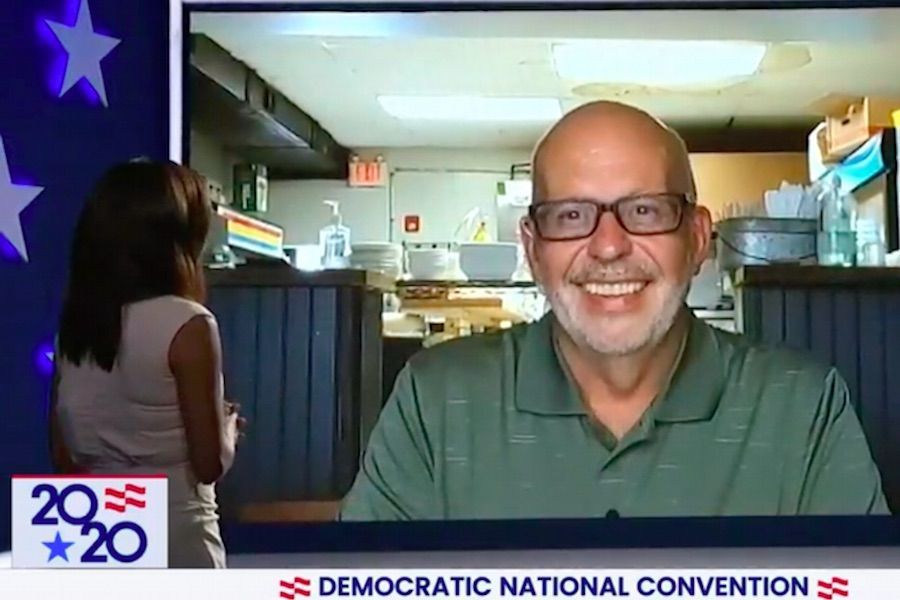 Meet Scott Richardson, the Swarthmore Restaurant Owner Who Spoke on DNC Day One

There were lots of people who gave speeches and spoke with DNC host Eva Longoria during DNC day one. There was, of course, Michelle Obama. Bernie Sanders showed up to convince his Never Biden crowd to vote for Joe Biden. John Kasich went literal with the crossroads idea. And then there was Swarthmore restaurant owner Scott Richardson, who appeared within the first 10 minutes.

The 64-year-old New York native and his wife own Occasionally Yours, a breakfast-and-lunch spot that has catered to the Swarthmore College contingent since 1989. And the DNC brought Richardson in to talk about how small businesses owners like him and his wife have been impacted by the COVID-19 pandemic — and how the government has handled it.

“To be honest with you, I’m just frustrated,” Richardson told Longoria during a brief interview that he recorded with her on Monday afternoon. “I don’t understand how we got to where we are. We’re the greatest nation in the world. And it just seems to me that if we just came together on this one issue alone, maybe as Americans and being united, we can overcome.”

So how did Richardson even get involved with DNC day one? Well, it all goes back to a roundtable discussion he participated in with Biden back in June. How he got picked for that, he’s not quite sure, Richardson told me on Tuesday morning before he had to dash off for his yearly physical. But once he did the roundtable, he was on the Biden campaign’s radar, and so they tapped him for DNC day one.

Richardson tells me that the interview was recorded in one take and insists that it wasn’t scripted or edited. He says that the Biden team just asked him to keep his remarks to 45 seconds or less. And they asked him to avoid any attacks on Donald Trump.

“I think they wanted to save those for a little later in the broadcast,” Richardson says, with a laugh.

It turns out that Richardson was actually a Trump guy in 2016, something he very much regrets in 2020.

“I’ve always been a middle-of-the-road voter,” Richardson tells me. “I’m not a party guy. I’ve voted probably 50 percent for Republicans and 50 percent for Democrats. I just couldn’t vote for Hillary Clinton. And I thought about Trump, why not? He wasn’t a normal, conventional politician, and I decided to give him a chance. But I was wrong.”

“I maybe could have lived with him until he totally messed up this COVID virus,” he continues. “I read about this mysterious virus back in November. You watched it march across the world. He thought it would never come to us. Well, it did. A real leader would have had a fireside chat with the American people. A real leader would have said, This is what we are facing. This is what we’re gonna do. And we will overcome it. Had he done that, I think he would have secured the election as a real wartime president. Instead, he did the exact opposite.”

Watch the full interview with Scott Richardson on DNC day one:

There have been numerous protests in the streets of Philadelphia since late May surrounding the killing of George Floyd and many other issues as well. And on Wednesday morning, climate and community activists are planning a new venue to air their grievances: the Schuylkill River.

The Earth Quaker Action Team (EQAT) and Philadelphians Organized to Witness, Empower and Rebuild (POWER) have announced a “canoe, catamaran and kayak flotilla.” The purpose of the flotilla? To call on PECO to forgive COVID-era bills and address climate change issues.

Per a statement from the groups:

PECO has refused to commit to a long term green energy plan that would lessen the impacts of climate change and this has led southeast Pennsylvania’s most vulnerable residents to be even more vulnerable during this pandemic. Already more likely to experience the negative effects of climate change — residing in flood prone areas, lacking access to air conditioning, living with illnesses exacerbated by heat, etc. — these vulnerable residents now have to cope with a pandemic that has disproportionately impacted (through job loss, illness, and death) low income communities and communities of color.

“Climate change is an area where PECO could have taken action and lessened the burden on these communities, but it has chosen to continue peddling fossil fuel energy and to extract more than $1.25 million each day in profits from our region,” says Dana Robinson, a volunteer with EQAT.

It’s been a while since I’ve seen a good flotilla. So I’ll be tuning in to the livestream at 9:15 a.m. on Wednesday to check it out.

There is so much bad news these days. There are so many sad, sad stories. And sometimes, well, sometimes you just need something totally ridiculous to read. If that’s where you’re at right now, might I suggest this new Rolling Stone story entitled, “How a ‘F-cking Nobody’ From Philly Got Dave Grohl to Jam With Him on Instagram Live.”

Short version: if you want to get your musical hero to hang out with you and play some Dire Straits, all you need to do is stage a ridiculous 24-hour Instagram livestream dedicated to said musical hero. The Rolling Stone article does a good job of capturing the moment.

And here’s where Grohl shows up live, several hours into the event:

Thanks to everyone on Team Grohlathon for pitching in and especially @cestclairemusic for screenshotting this after my phone died. WE GOT GROHL