"I haven't seen so many middle fingers since I graduated from Cardinal Dougherty," says the most hated man in the Villages. 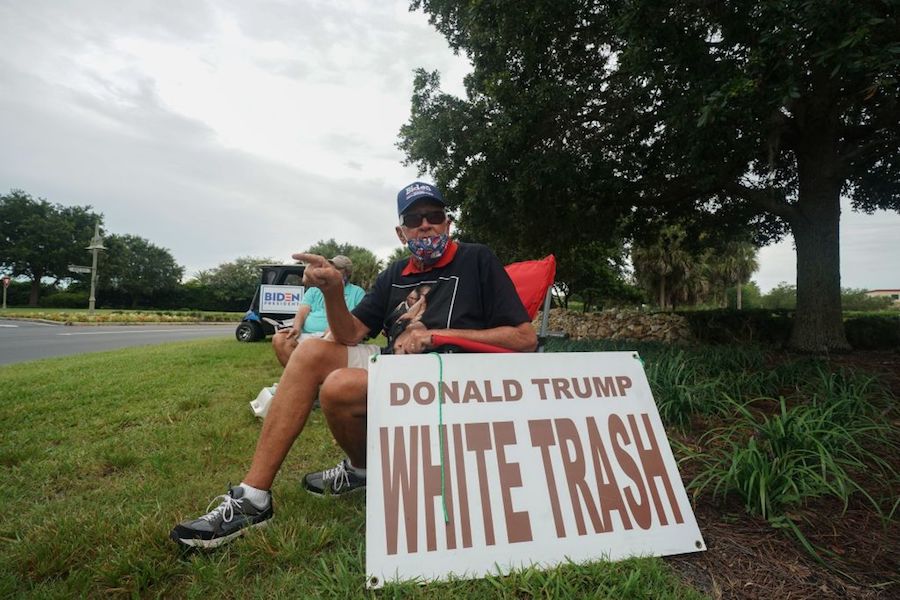 Ed McGinty at one of his daily protests against Donald Trump in the Villages, a highly conservative, pro-Trump senior living community in Florida. (Getty Images)

Let’s make a little wager, shall we? An old white guy who was born in South Philly and whose main hobby is golf retires to Florida. Down yonder in the Sunshine State, he lives with his wife in the ultra-conservative Villages retirement community, which is literally best known for being ultra-conservative. Well, and for being the largest retirement community in the entire country. The Black population of the Villages is less than 0.3 percent. The Villages advertises on Fox News. These are the facts.

So now the wager.

Chances are, you’d lay your stimulus check down on the first option. It would be the smart move, kind of like going all-in when you’re holding four aces in a game of five card draw. But, well, there’s always a chance that your opponent has a straight flush. And Ed McGinty is the straight flush in this example.

McGinty, 72, has become the most hated man in the Villages, which is about an hour northwest of Orlando. He’s a one-man anti-Trump army who stages daily protests in the community against Trump. His Phillies cap gives way to a Joe Biden cap on most days. McGinty rides around the Villages in a golf cart that displays anti-Trump posters.

On some days, it’s the PATHOLOGICAL LIAR poster: 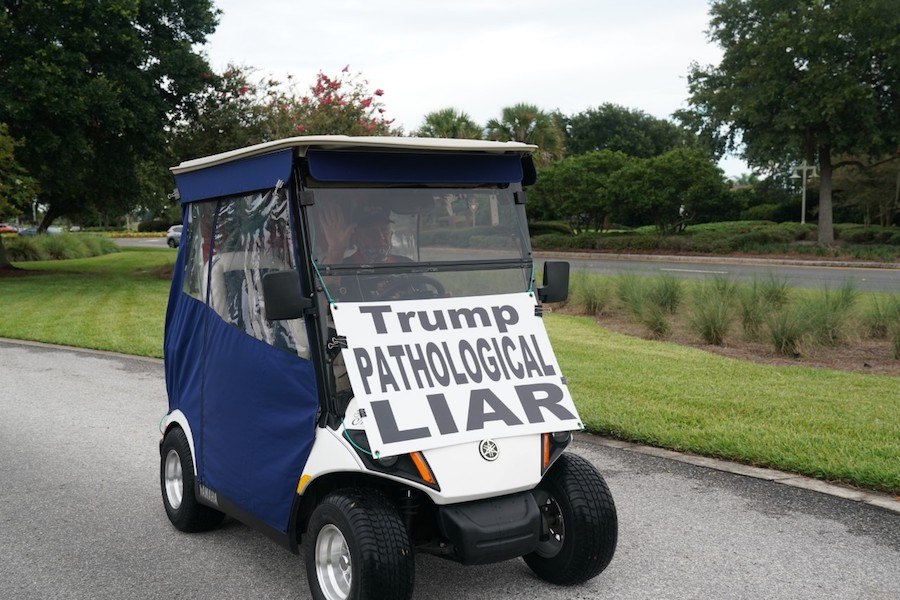 On other days, McGinty might opt for the FILTHY PIG poster: 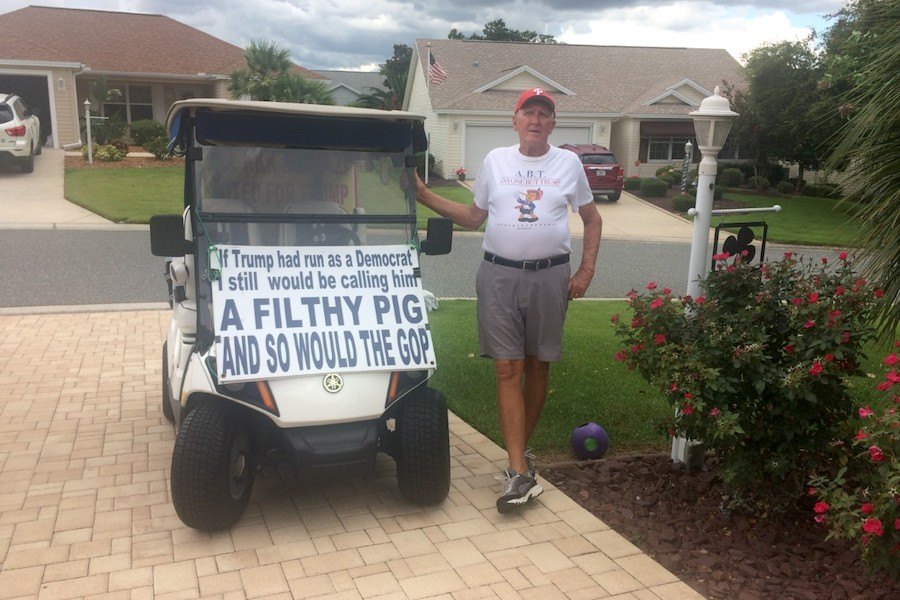 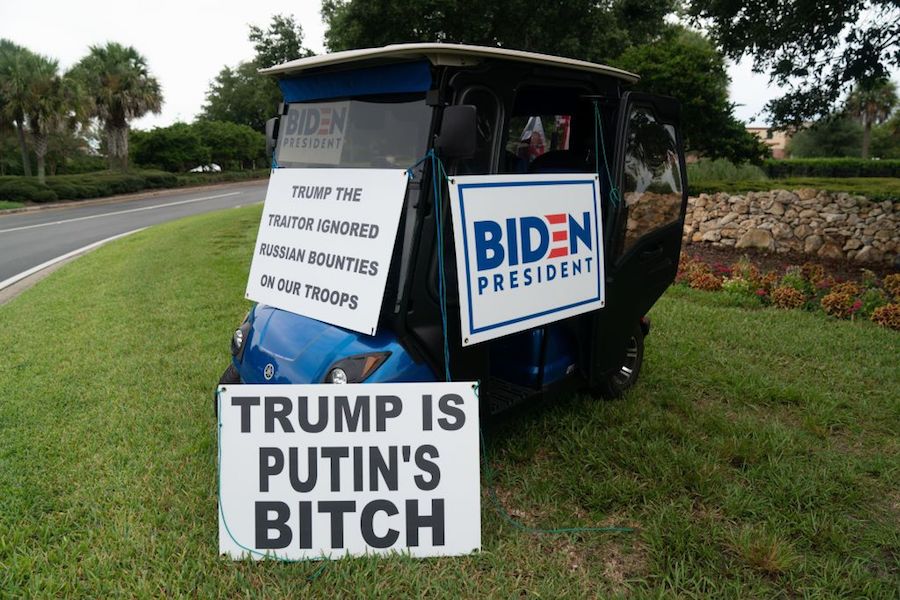 Another Ed McGinty poster in the Villages. (Image via Getty) 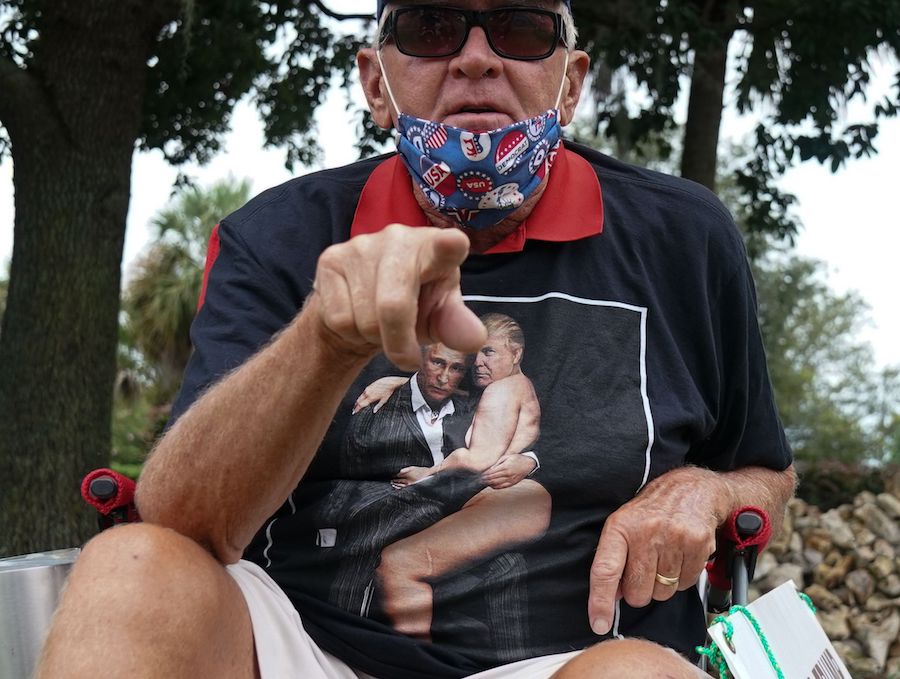 Ed McGinty wears his Trump-Putin t-shirt in the Villages in Florida. (Image via Getty)

McGinty, who spent most of his life in the Philly area working in real estate, says that when he and his wife decided to retire to Florida in 2015, they had absolutely no idea what they were getting themselves into. Oh, he knew that Florida was definitely a retirement haven for Rush Limbaugh listeners, but he didn’t get that the Villages was essentially ground zero.

“I didn’t know anything about the politics of the Villages, and I guess I didn’t really care,” McGinty told me earlier this week, just before his 9 a.m. tee time. “Back home, half of my friends are Republicans, and we never got into any kind of argument about it. But down here, it’s completely different. I haven’t seen so many middle fingers since I graduated from Cardinal Dougherty.”

During our call, McGinty described a large number of encounters and altercations with some of his neighbors. He says he’s received numerous pieces of hate mail at his house. He claims to have been physically threatened many times. And he tells of a couple of assaults.

Just recently, he says, a local Trumper tried to physically attack him, starting by ramming his golf cart into McGinty’s. (This is, apparently, how old guys fight in Florida: with golf carts.)

“I pepper-sprayed his face when he jumped out of his golf cart and tried to tackle me,” McGinty says. “After that, well, I won’t tell you what I’ve done, but let’s just say I have extra things to protect myself. I’m not gonna lose any more blood. If they come within six feet of me, I’ll tell them to stop. And if they don’t stop, I will stop them.”

Shortly after that golf-cart incident, McGinty decided to take his golf cart and signs to a pro-Trump rally that was being held in the Villages. At one point, one man raised his fist in the air and yelled “White power!” at McGinty and a small group of other counter-protesters. If this is beginning to sound familiar to you, it’s because Trump himself controversially retweeted a video of the man yelling “White power!”

Police confirm that at least one of the altercations involving McGinty resulted in a police report being filed, but no one has ever faced criminal charges as a result. Some Villages residents we spoke to, who declined to be named for this article, variously described McGinty as a “kook,” a “leftist who spews propaganda that nobody wants to hear,” and “a troublemaker.”

All of this controversy surrounding McGinty has spilled over into his family. How couldn’t it? He says that his wife is supportive of his actions but that she’s been shunned by some people she previously considered her friends. Others have stuck with her but have told her that they can’t have anything to do with her husband.

And he has two daughters in the Philly area he says he’s decided to stop talking to until after the election.

“I’m sorry to say that both of my daughters married Trump guys,” McGinty tells us. “Consequently, they have been brainwashed by their husbands. And I told them a few months ago that it’s better that we don’t communicate until after November. It’s sad.”

Okay, but most people retire so they can relax and enjoy their free time and pal around with their friends — not to become the most hated person in their community. So why not just, you know, move somewhere else?

“Listen, Florida is a wonderful place to live,” McGinty says. “I wouldn’t want to live anywhere else. When we first came down here, we spent a winter here and then went back up to Philly. And as soon as we arrived home, we thought, why the hell did we come back here? So we moved back to Florida full-time. Sure, I could move somewhere else in Florida, but really, it’s all the same in this state. It’s the perfect place to live — except for the politics.”