Who Was the Real Christopher Columbus?

The debate surrounding the statue in South Philly has lacked a key ingredient: factual coherence. So we enlisted Matthew Restall, a Penn State professor of Latin American history, to help us sort fact from fiction. 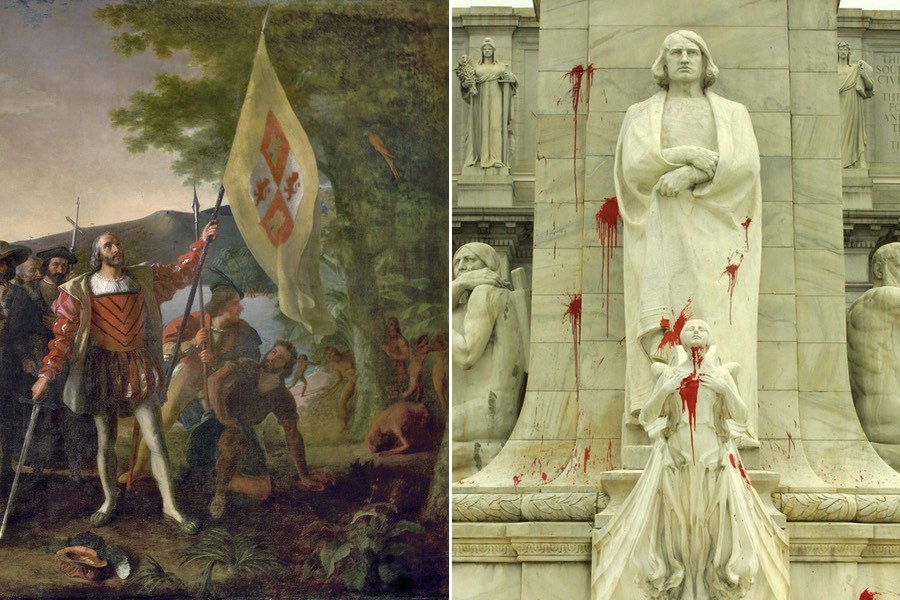 Two Columbus depictions: one by the painter John Vanderlyn in 1847, another by vandals more than 150 years later in Washington, D.C. Left photo via Wikimedia Commons; right by Chris Maddaloni/Getty Images.

The fight over the Christopher Columbus statue in South Philly’s Marconi Plaza sounds simple enough: Either the statue should stay or it should go. It doesn’t take long, though, for the fog of confusion to set in. All you have to do is ask why. Then you get a devolution into a set of contradictory, parallel arguments. No overlap. Judging from a recent five-hour public Art Commission meeting, even the basic question of who Columbus was — did he enslave and murder people, or not? — seemed to be in dispute.

The truth is, this part of the question shouldn’t really be up for debate. There are actual living historians who research this period and can convincingly tell us exactly who the 15th century explorer was. So we reached out to one: Matthew Restall, professor of Latin American history at Penn State and the editor of a scholarly journal, who should have as good a grasp as anyone on the current scholarship when it comes to Columbus. Philly Mag recently spoke with Restall by phone to dissect the arguments and separate fact from fiction.

At this recent five-hour Zoom call about the statue, some of the people to testify defended Columbus as an enlightened explorer whose legacy was tarnished by people who came after him, while others called him a murderer, rapist and slave trader. The only real point of agreement was that he was a historical figure who existed and was in the Americas in the late 15th century. How is the figure of Columbus viewed in the scholarly community?

What would that be? I only say that because if you’d sat through that meeting, you’d think there’s no chance for common ground.

I can imagine. If we just focus on the 19th-century Columbus and the way that he symbolizes America’s role in the history of immigration, then there’s a sense in which people can kind of come together and say we are all descendants of people who migrated to the United States, even some of us descendants of people who were involuntary migrants — meaning they were forced to come as slaves. But everybody agrees that we don’t want to go back to a time in which immigrants were treated badly. What we want to do is build an America in which everybody who is the descendant of immigrants, wherever they came from and however they came, can live together harmoniously. So 19th-century Columbus, he’s got nothing to do with enslaving Indigenous or African peoples, or genocide, or anything like that. He’s all about America being a land of opportunity. This is the post-slavery, 19th-century America, particularly in the Northeast, where people are coming to cities like Philadelphia and being treated badly. Italian immigrants were treated badly. And then they become accepted as part of the fabric of America. So the statue is saying, Look, Italians are coming to this city and have made important contributions, and they’re going to continue to come, and that’s going to be a positive experience. [The Philly statue was first erected in 1876 in Fairmount Park, in celebration of the American centennial.]

This particular discussion about Columbus always runs up onto this kind of rocky ground, because there’s a constant confusion of separate issues. The first confusion of separate issues is the one we just talked about: the 19th- versus the 15th-century Columbus. The second one is the confusion of Columbus as an individual — who he was as a man, what he thought and believed and did — and the larger historical context in which he lived. Columbus himself is not that important as a historic individual in the 1490s. He seems important to us because he is the first European who takes those ships across to the Caribbean islands and back again. He’s important in the sense that he marks a kind of watershed moment in that process. But he is not a particularly enlightened figure, and not a particularly bad figure. At that end of the spectrum we can find Spanish conquistadors who did terrible things. I mean, they were violent, sociopathic men of the kind that tend to rise up in a situation of warfare. So we can certainly find characters like that. Columbus is not one of them. He’s not someone who seems to particularly enjoy torturing and killing people. He does not set out to commit genocide and clear the Caribbean islands of Indigenous people. So when we focus on him as an individual, it really doesn’t get us very far.

The historian Laurence Bergreen has a book in which he quotes the writings of Michel de Cuneo, a sailor who was part of Columbus’s second expedition. Cuneo talks about how Columbus gave him a beautiful woman and then proceeds to describe how he tried to rape her. There’s also a letter written by Columbus in which he says, “There are plenty of dealers who go about looking for girls, those from nine to 10 [years old] are now in demand, and for all ages a good price must be paid.” Obviously those things don’t sound good. Is your point that while those are bad, the Spanish conquistadors were worse? Or do you reject the idea that that was Columbus?

No, it’s way worse than what you’re suggesting. I’ve read the Cuneo original manuscript and I’m familiar with those quotes you’re pointing out. There are many others like that. I’m not disputing those facts at all. Exactly what you’re speaking about is going on. But my point is that by focusing on Columbus, we miss understanding how massively widespread this was. There was a huge, international trade in Indigenous women — mostly young girls, typically pre-teens or early teens — as sex slaves. That begins in the Americas with Columbus’s voyages. But it’s not because that’s what Columbus particularly wants to do. It’s not because that’s particularly massive to him because he’s some kind of evil, slaving, rapist pedophile. It’s because that is absolutely a central part of the process of European colonization in the Americas. And that’s what’s important.

This is a huge story that has largely been buried for 500 years and needs to come out. By focusing on Columbus, you’re completely ignoring the tens, if not hundreds of thousands, of Native American women who suffer that kind of slavery all through the 16th century in Mexico, all the way up the genocide against native peoples in California in the 19th century. Where that debate needs to go is not, Let’s talk about whether Columbus was a rapist or not, because then you are doing a terrible disservice to all the women and all the native people that suffered in the centuries that followed Columbus. Columbus is not the problem. It is the process of imperial expansion and colonization that is the problem. 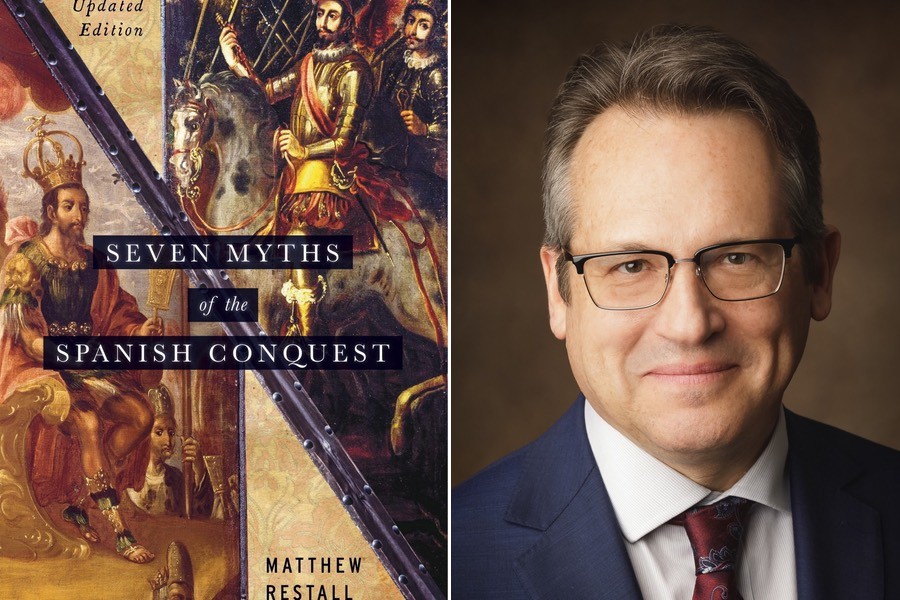 Restall has written more than 20 books, including an updated version of his book Seven Myths of the Spanish Conquest, due out next year. Photo and book cover courtesy Matthew Restall.

You’ve published a book called Seven Myths of the Spanish Conquest. In the title you don’t say “inaccuracies,” you say “myths,” which seems to imply intentionality — creating a story for a specific purpose. You’ve already outlined what you see as the mythologizing of Columbus. Should the 15th-century Columbus play a more prominent role in the mythology?

I’m really torn on that. Because on the one hand, you can’t undo everything that happened in the 19th century and the reason why Columbus became popular and important. Columbus was sort of an icon of the discovery. In the U.S. quest to build its own nationalist origin mythology, Columbus gets appropriated and used in that way. We now appear to be at an important and necessary moment of deconstructing that, and constructing something else.

That’s certainly what those who would argue in favor of removing the statue would say, I think — that it’s not necessarily to erase history, to use that often worthless cliché, but to either re-contextualize it or to remedy what might have been bad history in the 19th century.

And to talk about it, right? How great it would be to have that statue somewhere where it’s not a touchpoint for violence and protest. I’d like to see it put somewhere safe where schoolchildren can be brought and told who this guy was, and why this statue has moved around the city, why it’s upset some people, why some people want it on display and some don’t. There has to be some kind of context around it — the statue can’t just be there, seemingly randomly.

I think part of what’s going on right now with the discussion of statues in America is we’re struggling with a religious notion of what a statue is — the idea that if you put up a statue of someone, you’re almost worshipping them. If we’re able to get beyond that, and see statues as works of art, we can see how sometimes those statues are representing things that are really problematic, things that happened in the past that we want to understand so we can avoid them being repeated. Yes, we should talk more about the historic Columbus of the 15th century, but not to come to some conclusion as to whether he’s bad or good, but as a kind of window, as a point of access into that world so we can understand how European colonization began, and think about the legacy of that.