“I’m Opening the Restaurant and If Mayor Kenney Doesn’t Like It, He Can Come Get Me”

It seemed like Philly restaurants would be allowed to offer outdoor dining beginning on Friday, June 5th. The key word being "seemed." 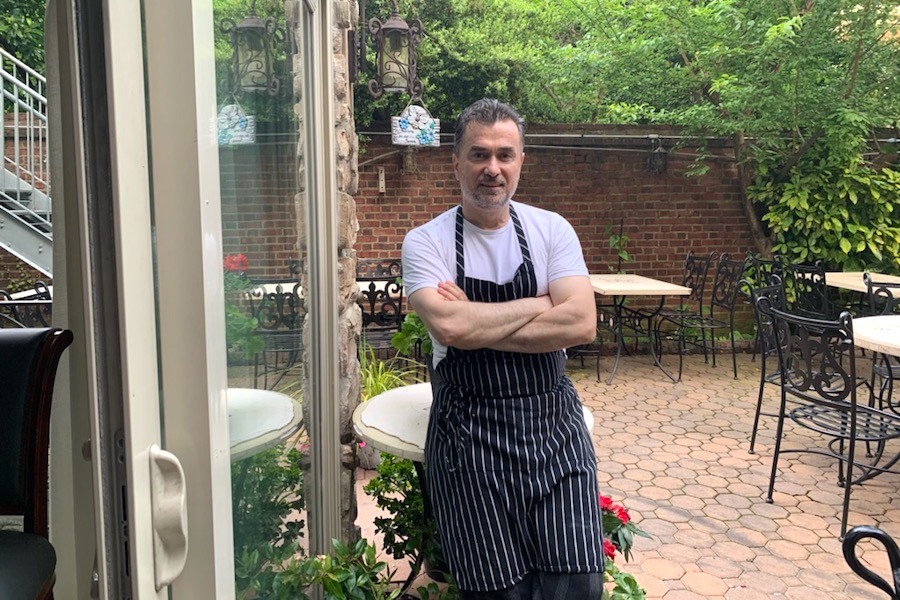 Branzino chef Luan Tota, who says he is reopening the restaurant for outdoor dining in Philly on Friday against Mayor Kenney’s orders.

A roundup of Philadelphia news. This post may be updated at any time as new information becomes available.

When I first heard that Philadelphia would probably allow outdoor dining beginning on June 5th, one of the first restaurants I thought of hitting up was Branzino in Rittenhouse Square. After all, the BYOB has won Best of Philly specifically for its outdoor dining. The gardens are beautiful.

Some restaurants with good outdoor spaces, including Branzino and Harper’s Garden, were prepping for a June 5th outdoor dining launch. After all, Pennsylvania Governor Tom Wolf announced last week that the Philadelphia area would move into the Yellow Phase of the COVID shutdown beginning on Friday, June 5th. And the Yellow Phase allows for outdoor dining, with some restrictions, of course. Or at least, that’s what the Yellow Phase has meant elsewhere in the commonwealth.

But now Philadelphia Mayor Jim Kenney has decided at the last minute that Philly isn’t ready for outdoor dining. So he’s delaying the start by at least a week.

Well, as you can imagine, this development isn’t sitting too well with some people. Most especially Branzino owner Luan Tota, who insists that he’ll be serving customers this weekend.

“I came to this country 20-plus years ago, and I have worked my ass off to come to this point I am at today,” says Tota, a 49-year-old Fishtown father of four who got his start in the biz bussing tables at Le Bec-Fin. “And now we’ve been shut down for almost three months — this after we were shut down for two years because of the fire. Well fuck that. I am opening the doors. People can come and enjoy the food here outside. That’s that.”

Tota says that he’ll cut the outdoor seating capacity by 50 percent. And as of Thursday night, he had about 20 reservations on the books for Friday alone. He spent Wednesday and Thursday ordering a bunch of produce, seafood and other products, which he estimates to have cost him about $5,000 in total.

“That was the last $5,000 I had put aside,” Tota claims. “So what am I supposed to do? I don’t want to be controversial, but when is enough? When should it be enough? Instead of keeping the business closed, Kenney should keep the looters away from our businesses. I am opening the restaurant, and if Mayor Kenney doesn’t like it, he can come get me.”

I’ve heard anecdotally that some other Philly restaurants plan to open for outdoor dining on Friday despite Kenney’s order, though I haven’t been able to get any official confirmations as of Friday morning. We’ll see what happens.

On Tuesday, we got word that a 29-year-old armed man was shot and killed by the owner of South Philly gun shop The Firing Line. The owner found the man (and three other men) inside his shop in the middle of the night in an apparent looting attempt.

This morning, Philadelphia District Attorney Larry Krasner declared that the shooting was “justified.” And he’s charged one other man for his role in the crime as police continue to search for two others.

“The facts we know and the law are clear that the business owner’s use of force while inside his own property against a burglar accompanied by others who was entering with a gun in his hand was justified,” Krasner said in a statement. “It is fortunate for the City of Philadelphia that this large cache of guns and ammunitions were not taken and sold on the street.”

Krasner announced the arrest of Khaleef Brown for his involvement that night. Brown was allegedly one of the three men who accompanied the man who was killed. Brown is charged with robbery, burglary, conspiracy, and possessing an instrument of crime, among other charges.

According to Krasner’s statement, the owner fired three shots, killing the one man and hitting Brown in the shoulder.  Brown went to Jefferson University’s emergency room, where police quickly tracked him down.

“He told a story to police about the circumstances of his gunshot wound that was obviously false and was quickly connected to the crime by overwhelming evidence of different types,” reads Krasner’s statement.

Philly Cops Have Been Covering Their Badge Numbers

Over the past few days, we’ve received quite a few tips that many Philly police officers have been covering their badge numbers. This is of obvious concern, because in an environment where you have protesters clashing with police and allegations of excessive force or police brutality, a badge number is one way that a protester could identify a cop to investigators.

It’s not uncommon for cops to place a black band known as a “mourning crepe” across their badge to honor other cops who’ve recently died, and that’s what was purportedly being done here. Of course, the band doesn’t need to obscure the badge number. Nor should it.

Philadelphia Police Commissioner Danielle Outlaw has now instructed all Philly cops to make sure that their mourning crepes do not cover their badge numbers.

Here’s some video of Philly cops being told to uncover their badge numbers:

#fishtown thank you to this fine example of an officer for making these officers uncover there badge numbers pic.twitter.com/II2TBBE1TC