Wondering About Memorial Day Down the Shore? Here’s What Jersey Towns Are Saying About Reopening

We’re all daydreaming about getting back to the sand and the ocean. Below, what we know so far about whether beaches will open by May 25th. 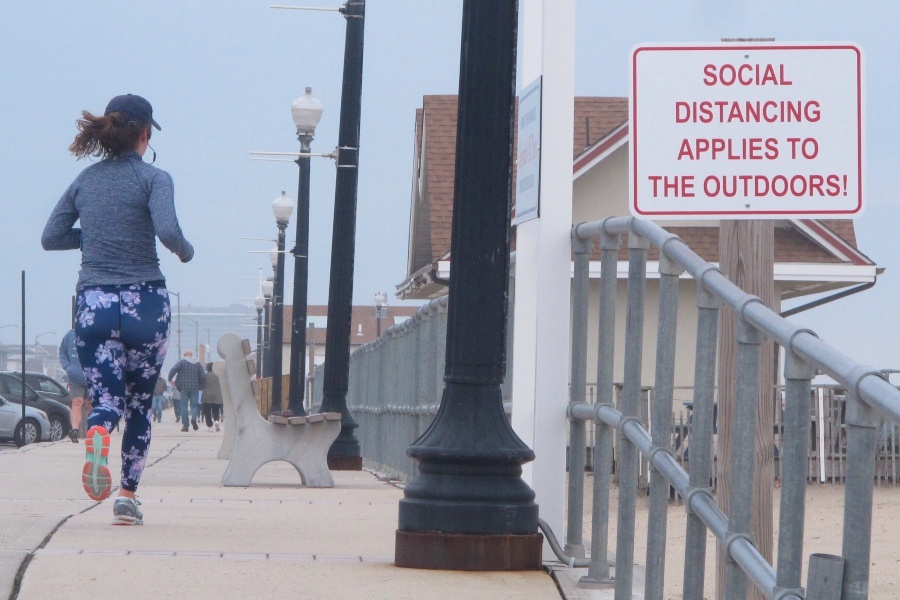 A jogger at the Jersey Shore. With social distancing measures still in place, it’s not yet clear what this year’s Jersey Shore Memorial Day will look like. (AP Photo/Wayne Parry)

With New Jersey expected to begin phasing out its stay-at-home order sometime within the next few weeks, residents and tourists are wondering: What will a Jersey Shore Memorial Day look like this year?

When it comes to holidays in quarantine, we’ve already seen a socially distanced Easter (anyone else hold the family dinner via Houseparty?), and though it’s still a month away, we’re probably bound to experience a similar sort of Memorial Day celebration. For those who are lucky enough to own lawns and grills, backyard barbecuing for household members is still a thing. But plans are up in the air for families who flock to the Shore each year.

It’s still too early to know for certain if any local beaches will reopen for a Jersey Shore Memorial Day — or if you’ll even be permitted to leave your house for recreational purposes. After all, when it comes to coronavirus case numbers, New Jersey is behind only New York: As of May 1st, the state had recorded 118,652 total COVID-19 cases (which works out to 1,336 per 100,000 people) and 7,228 deaths, according to the New York Times.

New Jersey Governor Phil Murphy outlined a somewhat vague reopening plan on April 27th that aligned with White House guidelines in stating that restrictions won’t be raised until the state sees a 14-day decline in new coronavirus cases and hospitalization rates, among other conditions. To help factor for widespread testing ability, the World Health Organization recommends that states ease quarantine restrictions only after the rate of those who have tested positive for the virus (of those who have been tested) drops to 10 percent or lower; New Jersey’s was around 43 percent the week of April 27th.

Murphy says he expects the state to double its testing capacity by the end of May. He also announced plans for a commission charged with guiding reopening decision-making, stressing that “a plan that is needlessly rushed will needlessly fail.”

For now, as we envision sunny beach days at some point in our future, we’ve rounded up information on what towns and counties have said so far about Jersey Shore Memorial Day plans. We’ll update this guide as more information comes through.

Cape May County Department of Tourism director Diane Wieland told CBS3 in late April that the county is “anxious to open up” and that “all of our businesses have been patiently waiting.”

Wieland said Cape May expects to release a “solid” reopening plan within the next few days. The county is “energized” by Governor Murphy’s hope to open some Shore towns by Memorial Day, she added.

Cape May County, which includes the municipalities of Cape May City, Cape May Point, Avalon, Wildwood, Sea Isle City and Stone Harbor, among others, recorded 334 COVID-19 cases as of May 1st, with 22 deaths.

One town within Cape May County isn’t playing around: The Ocean City Chamber of Commerce has already announced that beaches will remain closed to visitors for Memorial Day weekend. There will be no traditional “unlocking of the ocean” celebration this year.

When to expect a reopening? Michelle Gillian, who leads the town’s Chamber of Commerce, says they’re hopeful business will be somewhat back to normal in June.

Ocean City had reported 23 COVID-19 cases as of April 29th, with 13 remaining active and zero deaths.

Wildwood Mayor Pete Byron told CBS3 that the town is coming up with a phase-in plan that would allow businesses to open “at a certain percentage and then work your way up to 100 percent as we get into the beginning of the summer.”

That plan would potentially go into place in the beginning of June, Byron said, depending on the state of public health. (Memorial Day is May 25th.)

If new case numbers provide any indication, it’s unlikely Atlantic County will reopen its beaches in time for Memorial Day. On April 27th, the county reported its highest one-day total of new COVID-19 cases: 108 positives. As of April 30th, the county had recorded 960 confirmed cases, 42 deaths and 178 recovered residents. Officials reported a 27.1 percent rate of positivity among those tested, which was below the statewide rate but about 17 percent above the recommended rate.

No solid word yet on Memorial Day plans for the county and its towns, which include Atlantic City and Brigantine, among others. Michele Gillian, executive director of Atlantic City’s Chamber of Commerce, said reopening the town by Memorial Day would be a “challenge” and that the first or second week of June would be more realistic, according to the Press of Atlantic City.

The Atlantic City boardwalk has remained open, though casinos and businesses along it are closed. Meanwhile, officials in Wildwood, Ocean City, Point Pleasant and Asbury Park, among others, have closed their boardwalks.

No county-wide word yet on Memorial Day plans. As of May 1st, the county had reported 6,505 total COVID-19 cases, with 420 deaths.

Located east of Trenton and within Ocean County, Point Pleasant Beach will begin scaling back restrictions starting this Friday, Mayor Paul Kanitra told News 12. He called his plan a “commonsense” one.

Some areas within the town will remain off-limits. Kanitra is looking to reopen Maryland Avenue beach to some socially distanced residents as a test run, as long as additional policing becomes available.