And even then they weren’t done with me. 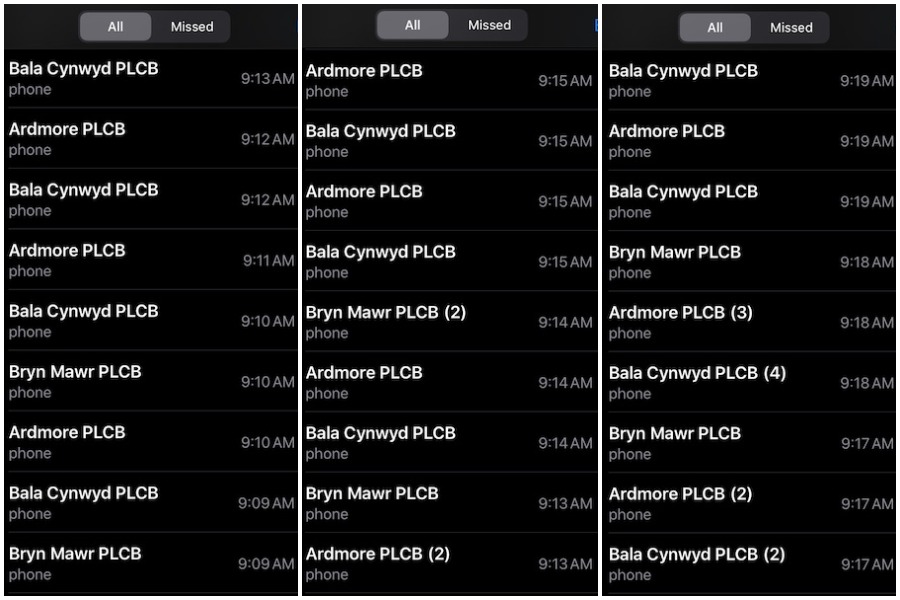 Screenshots from a fraction of my calls to three Philly-area PLCB wine stores, attempting to place an order for curbside pickup.

When I learned that the PLCB had decided to reopen some of the wine and spirits stores in Philadelphia and across the state for telephoned curbside pickup orders starting on Monday morning at 9 a.m., I knew I had to try it out.

It’s not that I needed any wine or spirits. My house generally maintains a pretty well-stocked bar.

But once the whole PLCB online ordering thing imploded after they shut down the state stores (long story short: the website crashed constantly and inventory was absurdly limited), I realized it was my civic duty to test the new system.

So I called a friend and asked him if he needed any wine or booze, and he said yes. His order? Two 4-liter bottles of Carlo Rossi Paisano Red and two 750mL bottles of Powers Irish Whiskey.

To place an order for curbside pickup, you choose your store from the list of participating locations. Then you call the store and place your order.

Fair enough. I looked up the phone numbers for a couple of the other PLCB stores nearby that were participating — there was one in Ardmore and one in Bryn Mawr — and I just started dialing. Over and over again. And the Bala Cynwyd store, too.

On other occasions, the calls just simply didn’t connect. No busy signal. No ring. Just nothing.

At 9:40 a.m., I got excited, because the phone at the Bala Cynwyd PLCB location was ringing. This was the first ring I had heard in about 40 minutes of dialing and redialing.

“Ringing!” I told my editor a minute later, via Slack.

But then it just kept ringing.

“I swear, it’s about to say ‘all circuits are busy right now’,” I Slacked.

It didn’t. Instead, the ring suddenly changed to that really fast, psychosis-inducing busy signal.

I wanted to ask if the items I wanted were available — why waste my time and theirs otherwise? — but the clerk told me that I had to first give him my name, address, phone number and email address. This all seemed to take forever. These people are used to selling bottles of Cupcake wine over the counter. Not taking down names and numbers.

Finally, I relayed my order. The clerk asked somebody in the background about the Powers whiskey, and the indication seemed to be that it was in stock.

“Should I give you my credit card number now?” I asked. (You have to pay in advance by credit card.)

No, I was told. They would call me back once they verified that they had everything that I needed. You’d think they could just pull this up real quick on a computer. Ya know, an inventory system. But who knows?

Around 10:20 a.m., an employee from the Bryn Mawr PLCB called me back and said they didn’t have the Powers. So they asked me if I wanted to replace it. I told them to give me a 1.75L bottle of Windsor Canadian Whiskey. (What can I tell you? The guy likes good Irish whiskey and shitty Canadian whiskey.)

They told me they would call me back.

Around 11:30 a.m., they called and told me that they had the Paisano and Windsor in stock. I gave them my credit card number. They said the total was $146, which made absolutely no sense. Then they realized that they had given me another customer’s total. My total was around $56, explained the clerk, who then said that the transaction had been approved.

Nope. I had to wait for another call confirming that the order was actually ready and waiting.

About five minutes later, the clerk calls me and says that she accidentally charged me the $146 and that she would immediately issue a refund. Oh, but she can’t figure out how to do it and says she needs to speak with her manager. She said she’d call me back.

Sure enough, a minute or two later, the PLCB clerk calls me again. By my count, we’re up to 164 calls now. She told me to bring my ID and credit card to the front door upon arrival, and she’d process the refund while I waited outside.

When I arrived, the door was locked. I knocked. Somebody came to the door and took my ID and credit card. And then, about five minutes later, my receipts and box of shitty wine and shitty Canadian whiskey emerged: 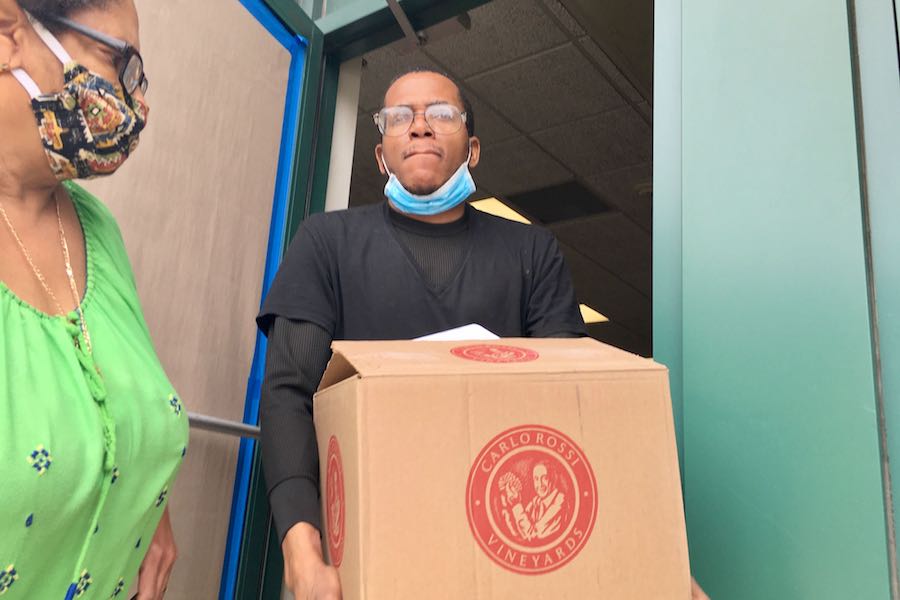 PLCB employees come to the door with my curbside pickup order outside the Bryn Mawr wine and spirits shop. (Photo by Victor Fiorillo)

I do have to say one thing. Every single PLCB employee that I dealt with was just as kind and sweet and helpful as could be. And I cannot possibly imagine how difficult their job is right now, dealing with angry, stressed-out people who just want their vodka.

But, seriously, PLCB, you can keep your curbside delivery. I’ll be in Delaware or New Jersey.