Pregnant in a Pandemic: “I Started to Think That Maybe I Should Just Give Birth in My Bathtub” 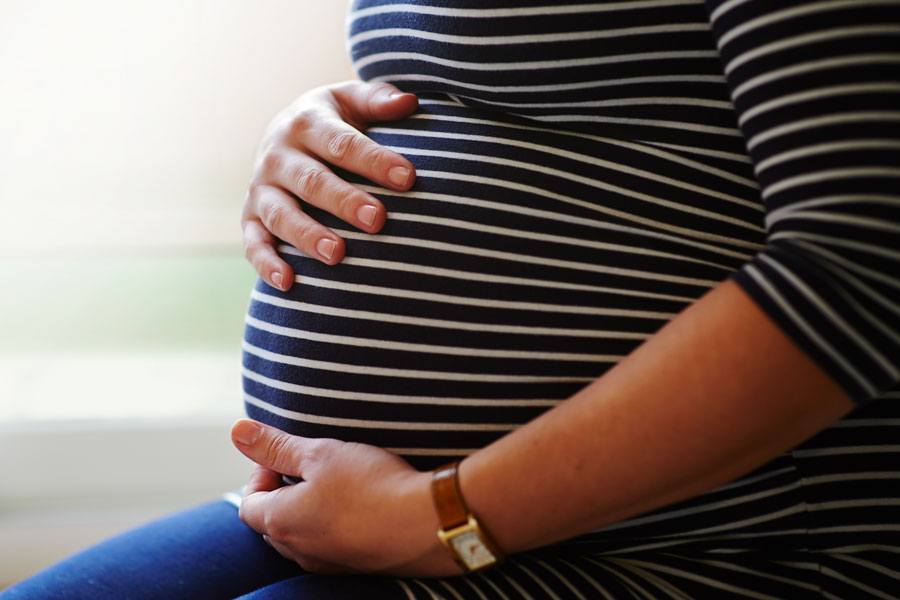 Real Philly women on what it’s like to be pregnant during coronavirus. Photograph by Mike Harrington/Getty Images

Two days before she was supposed to give birth, Erica Schmidt found out she could only bring one support person into the delivery room with her. “We had a whole plan of my parents and my four-year-old daughter coming to visit,” she says. “That didn’t happen, obviously.”

In the days leading up to her March 16th caesarean section at Pennsylvania Hospital, Schmidt, who lives in South Philly, floated the idea of trying to schedule an earlier delivery. But without a dire medical need for a date change, the hospital wouldn’t allow one. So Schmidt braced herself to give birth with only her husband at her side, in a hospital setting that would likely put her at higher risk of contracting the coronavirus. “I wanted to try to get in and out of that hospital as quickly as possible.”

In any given week, about 400 women give birth in Philadelphia, according to 2018 statistics. Now many of those women, like Schmidt, are facing changes in protocol when it comes to delivery, not to mention dealing with increased anxiety. Beyond limiting the number of visitors and supporting people who can be on hand during delivery, area hospitals have put additional temperature and symptom screenings in place. And local providers have also started to transfer prenatal appointments to a telemedicine format.

Even though Schmidt, who’s 41 and whose baby daughter was in a breech position, was considered a higher-risk geriatric pregnancy, she still weighed the possibility of delivering at a birth center or during a home birth. “If it hadn’t been as much of a safety risk for me, I really would’ve considered it,” she says.

Expecting mothers in the area feel the same way. Mary Nghe, a 25-year-old mom-to-be from South Philly, has thought about delivering at a birth center. She figures those centers probably have less risk of exposure to the virus than increasingly crowded hospitals. But with gestational diabetes, she, too, is considered a high-risk pregnancy, and so Nghe is proceeding with her original plan of delivering at Jefferson Hospital on May 5th.

Still, Nghe now faces the tough decision of whether to bring her mother or her boyfriend as the support person during her delivery. After the news that New York City hospitals weren’t allowing any support people in the delivery room (a ruling that has now been overturned by the state), Nghe started to panic. “The idea of giving birth alone was terrifying to me, especially for my first delivery,” she says. “I started to think that maybe I should just give birth in my bathtub.”

TEKARA GAINEY, A LOCAL DOULA and associate for the Maternity Care Coalition, has noticed greater interest in home births and birth-center options over the past few weeks. “I’ve spoken with quite a few people who are now too fearful to deliver at a hospital or are afraid of the possibility of delivering alone,” says Gainey.

The increased demand for out-of-hospital delivery options has put a strain on the limited number of birth centers and home-birth midwives in Philadelphia. “They just can’t service all of the folks looking for care right now,” Gainey says.

“The issue is capacity,” says Mari-Carmen Farmer, a CNM at Jefferson Hospital. “We have enough midwives to meet the demand, but because of the licensure issues, it’s hard to practice.”

Then there’s the issue of cost. Although home births and birth-center deliveries are cheaper than hospital ones, they’re not typically covered by health insurance. Some of the pregnant people that Gainey supports as a doula have now started to consider unassisted home births because of financial limitations, fear of the hospital environment, or a combination of both.

Beyond the usual stress of pregnancy and giving birth, the chaos of the current pandemic has new moms and pregnant people scared and worried. Aimee Beam, a 33-year-old new mom from Yardley who gave birth on March 20th, remembers trying to stay calm in the face of news about infant cases of the coronavirus in the United States. And Erica Schmidt recalls experiencing hysteria on the day of her delivery.

Jefferson’s Farmer says the added stress of the pandemic — and its influence on the birth community — can put new mothers and pregnant people at risk, thanks to the Fear-Tension-Pain cycle. “In very basic terms this cycle tells us that if you’re scared, you’re going to be tense. And if you’re tense, you’re going to have pain,” Farmer says.

HEALTHCARE WORKERS TAKING CARE of expectant mothers and newborns are experiencing their own sort of stress. “We’re constantly trying to put healthcare workers at ease in terms of protection, but I think people are also afraid for their families,” says Dr. Sindhu Srinivas, the director of obstetrical services at the Hospital of the University of Pennsylvania.

Srinivas has noticed that hospital workers with family members who suffer from other medical conditions already have extreme anxiety about the risk of contracting the virus and passing it to others at home. Though she and her team have made efforts to help acknowledge these fears — and provide support for them — she knows that doesn’t mean those anxieties just go away.

“Labor and delivery is usually a nice, happy place,” adds Dr. David Jaspan, chair of OBGYN for the Einstein Healthcare Network. “But this pandemic has raised the angst and concern of all healthcare workers to highs I’ve never seen.” Fever can often be a relatively common side effect of various complications during childbirth. Now, hospital workers have to make different assumptions about those fevers.

There’s an added pressure for doctors and nurses on maternity wards to stay healthy. Labor and delivery units require hospital workers to have a unique set of skills that aren’t easily transferable to doctors in other disciplines — some of whom may not have even seen a live delivery since medical school. Because of these concerns, Dr. Wadia Mulla, the director of maternal-fetal medicine for Temple Health, says that both hospital workers and patients now have to wear far more personal protective equipment than usual. “We’re asking our patients who are in labor to now wear masks, which is not particularly comfortable,” she says. “And we’re all wearing face shields and masks throughout delivery as well.”

Despite the rising stress of healthcare providers everywhere, Aimee Beam, who gave birth at Doylestown Hospital, felt extremely supported by the hospital staff there. Though she found out only three days prior to her delivery that just one visitor would be allowed, Beam felt comfortable with the changes because she knew it was for the health and safety of everyone involved. “In spite of all the uncertainty, our doctors and nurses gave us a really amazing birth experience,” she says.

Beam worked around the new visitation policy by arranging video calls through Zoom and Google Hangouts with family and friends following the delivery. Chatting with her newborn’s grandparents over video made her feel like she wasn’t robbed of the kinds of special experiences she had during her first birth.

Beam’s use of video calls is something doctors and doulas in the area are also turning to as new means of providing comfort to the pregnant people they support. Elizabeth Varaso, a local doula and childbirth educator, has focused on transitioning her education and support to virtual formats like Zoom or FaceTime. Even though she knows some expecting mothers will opt for an out-of-hospital birth, Varaso wants those still giving birth in a hospital to have as many resources as possible. “I had some really ugly cries this week imagining women having to give birth without the support they need,” she says.

Samantha Wittchen, a 40-year-old expecting mother from Kensington, has also switched to virtual communication with her doula. She plans on having her doula at home with her in the moments leading up to her April 22nd due date at Jefferson Hospital. After that, Wittchen hopes that she and her husband will be able to FaceTime their doula in the delivery room, though the exact logistics remain unclear.

Wittchen feels prepared to deliver in a hospital under the new changes, but she still worries about what might happen if Philadelphia rules that pregnant mothers have to deliver alone. “When this all started happening, I sort of jokingly said to my husband, ‘So, when do we need to buy the inflatable pool for the home birth?’” says Wittchen. “But I think I would only want to really go that route if I found out my husband couldn’t be there.”

Despite a noticeably heightened interest in home births, Varaso emphasizes that fear of the hospital itself is not necessarily a good enough reason to change delivery plans. “There’s something to be said for your gut response and sense of safety about where you want to give birth,” she says. “Out-of-hospital birth is not for everyone.”

But the fear of hospitals, and the excessive stress new and expecting mothers now face as a result of the coronavirus pandemic, could have grim consequences. The United States has a notoriously high maternal mortality rate, at 17.4 deaths per 100,000 live births as of 2018. The rate for black women is 2.5 times that of non-Hispanic white women. “When there’s a crisis, the people that suffer most are the people that were already suffering,” says Jefferson’s Mari-Carmen Farmer.

Many of the cases cited in maternal mortality are not necessarily medical events. Those who lack a stable home environment, experience substance abuse issues, or have suicidal ideation from postpartum depression all contribute to maternal mortality as well. And in the midst of a combined health and economic crisis, Farmer thinks we might start to see that mortality rate increase.

Though New York City’s rule of restricting any support people from the delivery room was overturned by the state, Varaso worries that those restrictions could still happen in Philadelphia.

“We know from studies that having a source of continuous support during delivery reduces the risks of all outcomes we don’t want and increases all of the things we do want,” she says. “If we take that support away, it’s a logical conclusion to say that more women will die.”