The Lax Procedures at U.S. Airports Should Concern Everyone

What I experienced on my journey back to Philly from India shows how much the federal government is still not on top of things. 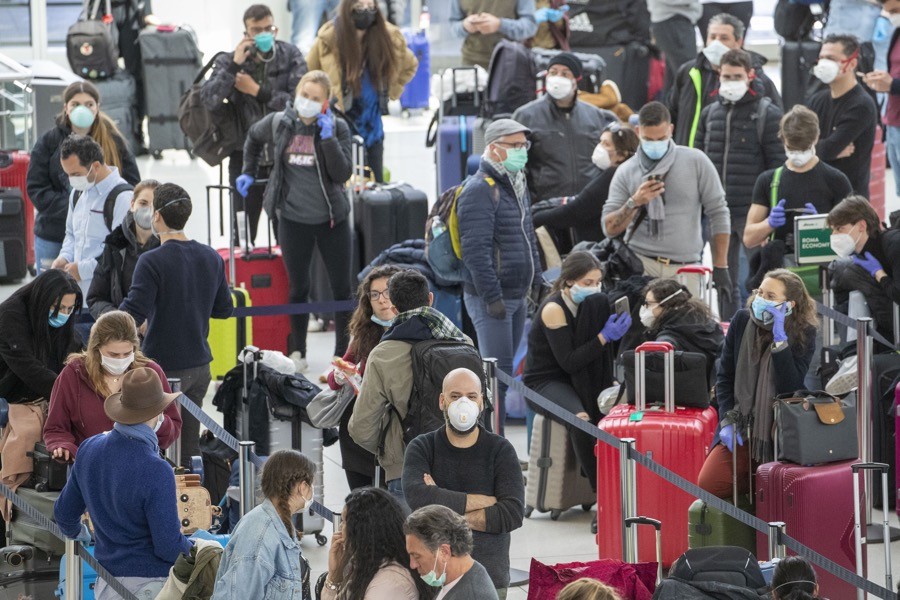 I arrived in India on March 7th. I was there to marry my husband for the second time — our first celebration had taken place in Pennsylvania with my family, and our second was to take place with his family in Chennai, India. We departed for our trip long after coronavirus was known to be an issue, but before it had taken on the pandemic proportions it would develop into over the following weeks.

Still, we were surprised at the number of precautions taken when we disembarked in Chennai. The airport had forms printed for us to fill out asking if we had a fever, cough, or other symptoms. We completed two forms, one for the immigration officer and one for a health official. Both were stamped and collected. Then, before we proceeded to immigration, guards scanned every passenger’s temperature.

The coronavirus screening in Chennai on March 7th was orderly, quick, and well-executed. And it didn’t end once we left the airport. As we traveled around India, every hotel checked the temperatures of everyone in our party before we were allowed to enter the buildings. Some required us to fill out a form stating which countries we’d traveled to and if we were at risk. India had far fewer cases than other countries, and yet by March 22nd, India had banned travel from the U.S., among other infected countries, and was under national lockdown with everyone on curfew and commanded to stay at home.

When I arrived back in the U.S. on March 22nd, however, I found our country’s approach to COVID-19 to be decidedly more laissez-faire — which I appreciate when it comes to, say, portion sizes at restaurants, but is not a quality I look for in a governmental pandemic response.

My husband and I finally landed at Newark International Airport after our flight to Philadelphia was cancelled three times, apparently owing to both general airline disorder and President’s Trump’s hasty March 13th decision to corral most international flights through just thirteen airports.

That directive itself seems problematic. Rather than corral everyone into thirteen airports, wouldn’t it have been wiser, safer, and just-plain-more-sensible to give every international airport in the U.S. safety directives as to how to handle international arrivals? Check everyone’s temperature, collect everyone’s form. Why pick and choose which countries require basic screening, and which airports can do this screening? And, most importantly, why squeeze all the potentially infected people into the same airports in long lines?

This ill-conceived plan led to general chaos at the U.S. airports, with people trapped in lines in close proximity to one another, creating a perfect situation for spreading the virus.

Meanwhile, for guests who traveled to our wedding in India (which was not a country on Trump’s travel ban list), the journey back was messy and confusing. President Trump’s directive seemed to result in almost all international flights being sent through these gates, and in more flight cancellations stranding Americans abroad. One of our guests was sent through Philadelphia International Airport as scheduled, another was rerouted on a flight to JFK.

The rest of us had our Philadelphia flights cancelled and had to rebook flights to JFK and Newark, then had to get on trains or rent cars to get back to Philadelphia. These changes caused us to lose significant amounts of money (we each had to buy entirely new flights from $700 to $1,200 per ticket to get back, plus rent cars), almost get stranded in India, and spend more time in public transit and public spaces.

Maybe it would have been worth it — if all these inconveniences resulted in better screening of those landing in the U.S. from international destinations. But that wasn’t the case.

The CDC protocol for Americans landing from European countries and China (which ended up, in practice, being all international flights) said, “Upon arrival, travelers will… continue to enhanced entry screening where the passenger will be asked about their medical history, current condition, and asked for contact information for local health authorities. Passengers will then be given written guidance about COVID-19 and directed to proceed to their final destination, and immediately home-quarantine in accordance with CDC best practices.”

But when my husband and I and our guests landed in Newark and JFK for this supposed “advanced screening,” there were … mixed results.

I had no screening whatsoever and didn’t have my temperature taken, even though it was taken every time I turned a corner in India. The coronavirus forms I diligently filled out are sitting on my dresser, since the CDC and U.S. Immigration neglected to collect them as we were told they would.

I’ll say this: it’s possible taking temperatures at the airport doesn’t do much. It’s also possible immigration officers and the CDC don’t have the bandwidth to examine all of our travel forms. And there’s no question authorities could hand out government guidelines for self-quarantine to all disembarking passengers, and we could toss them right in the trash instead of adhering to them.

But does that mean we shouldn’t be even trying?

If our airports and our country can’t execute even these basic, routine steps to try to keep citizens safe — if the people in charge can’t even pretend they are collecting the forms they’re supposed to, or that they’re concerned about taking temperatures — then what does that say about the ability of our government and our institutions to have any semblance of control in this emergency?

The lax airport procedures are just one microcosm of the failure of our government to deal with this in a serious and intelligent way at the national level. Instead, right now it just seems like one sloppy, “whatever, man” decision after another. And “whatever, man” in a global pandemic means a lot more people are going to continue to die than need to.