I Planned My Granddaughter’s First Birthday Party for Months. Then We Had to #CancelEverything

Our scaled-down version had a lot less hugging and kissing than usual, but no less love. (Also, could anyone use a couple dozen cookies?) 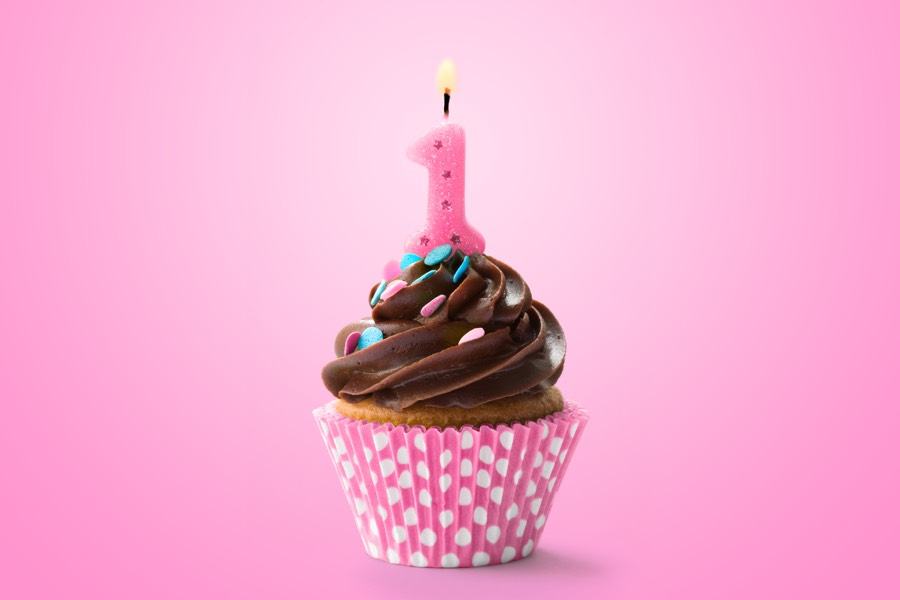 I planned the party for months. Then we had to cancel everything. Photo: Ruth Black/Getty Images

The plans had been set for a long time.

The invitations arrived way back in January, for one o’clock on Saturday, March 14th. My first clue that this birthday party for my soon-to-be-one-year-old granddaughter might be more of a big deal than I’d anticipated came when my daughter, her mom, announced that “the colors” for the event would be hot pink and gold.

We have colors for baby birthdays now? Whatever happened to a picnic table in the backyard?

But I’m new at this grandmother thing, and I’m not on Instagram, so what do I know? I snapped my jaw shut and went along, offering to do what I could, help where I might. I would order a big-ass hoagie tray, make a ton of fruit salad, bake enough cookies for 50 people (which means for 150 people; I have trouble with cookies). I’d bring the makings of a pink-and-gold balloon arch I found on Etsy (so cute!), along with a balloon pump and lots of duct tape. I ordered eight dozen hot pink carnations and rounded up enough little glass vases to have three per table. I ordered soft-pretzel trays. I did all this way ahead of time because that’s the kind of person I am — the kind who stays on top of things out of a deep-seated fear that if I don’t stay on top of things, they’ll fall the hell apart.

My daughter, Marcy, has inherited this tendency, along with the anxiety that leads to it. That’s one reason the invites went out in January. Her husband, Basil, is much less structured. They make a good match. I did worry when I found out they planned to leave with my granddaughter for a two-week trip to visit his family in Kenya the day after the birthday party. I mean, sure, they’re young and I’m old, but that seemed like a lot to take on. Still, I figured they had their reasons, and that those reasons probably had to do with the price of plane tickets and weren’t any business of mine.

I’m not the talk-on-the-phone type and Marcy knows it, so when she rang me at work last Tuesday, I figured something was up. “Well,” Marcy drawled on her end, and she sounded so calm, I thought we were going to be fine. But then her voice caught in a sob and she just went to pieces, the way she sometimes does when life gets to be too much. She didn’t know whether to cancel the party or not; she couldn’t decide what to do in the face of what was turning into a worldwide pandemic. Meantime, the Kenya trip was still on.

We went over her options, back and forth, until she sounded okay again. Everyone would understand, whatever her decision, I assured her. It was only a birthday party. If she wanted to just leave it open, invitees could decide for themselves whether to come. And it was only Tuesday. She didn’t have to decide right there and then. She could see how things evolved over the next few days.

Things didn’t get any better. In fact, they got worse fast. On Wednesday afternoon, Philly Mag told us all to go home and work from there until further notice. The markets — both financial and grocery — went haywire. Countries were closing their borders. People were dying. Italians were singing from their balconies. Marcy called again. This time, there wasn’t any pretense. “I’m scared,” she told me. “I’m scared that people will go … you know. Feral. That it will be every man for himself.” She and Basil had, of course, emptied out their fridge and cupboards in the preceding month, because they were going to Kenya for two weeks. She didn’t have any food in the house; she was short on diapers. She was afraid to take the baby to the grocery store. And she was leaving the decision about Kenya up to Basil because she didn’t want to make it, in case it turned out to be wrong.

“I have toilet paper,” I told her. “I have so much food. We could live for six months on the food I have here in the house.” This was an exaggeration, and some of the meals would be pretty weird — there would be a lot of granola bars involved — but we would survive. Among other provisions, I had enough melons and mangos and strawberries to make fruit salad for 50. I do things ahead of time, remember?

There was more agonizing, more back-and-forth. On Thursday, she and Basil made the decision to cancel the party. We divvied up the invite list and called and emailed friends and family. Everybody, frankly, sounded relieved at the news.

I’d like to give a shout-out here to Primo’s, which canceled the super-duper-size hoagie tray without any questions. All hail the manager at ShopRite, who, when Marcy called to put a hold on the meatballs, said “Corona?” sympathetically. A lot of my friends wound up with carnations left on their porches. I’d already baked 10 dozen cookies, so we passed those around, too. I still have enough dough in the freezer for dozens more.

On Friday, Basil pulled the plug on Kenya for the immediate future. I’ve never been so relieved.

On Saturday, 10 of us, plus two babies, met at Marcy and Basil’s house for a way-scaled-down birthday party. It was potluck: some hot dogs, chapatis, stewed kale, lots and lots of fruit salad and cookies. “Happy Birthday” was sung, sans the usual accompaniment these days of washing of hands. There was much less hugging and kissing than usual, but no less love. It was a warm, sunny day, and my granddaughter got a few presents, plus chocolate frosting up her nose.

Back home on Saturday night, I thought about Basil’s mom in Nairobi. She’s a nurse. I hope she understands why he made this decision. I thought about how lucky I am to get to see him and Marcy as often as I do. I thought about all those Italians singing on their balconies. The nightly news showed people in Philly wearing green hats and roaming from bar to bar on South Street, and throngs of Americans stuck in airports, waiting with nothing to do and nowhere to go. Saturday Night Live was a rerun; the musical guest was Coldplay. They played a song called “Orphans”:

Oh, I want to know when I can go

Back and get drunk with my friends

I want to know when I can go

Back and feel home again …

I had the same sense I had after 9/11: that everything had changed, had shifted. That worse was coming. Marcy was 12 then, college and marriage and children a million years away for her, the whole world her middle school and her friends and what her parents would do next to cause her excruciating embarrassment. My granddaughter will get there, one day.

And she’ll have a story, a hell of a story, about her first birthday and fruit salad and chocolate frosting and the trip to Kenya — her first, of many — that didn’t quite work out the way her parents hoped it would. It’s the stories we tell, of heroism and terror and tedium and laughter, that chart our course, give order to our universe, unite us in joy and pain. I want to be with you ’til the world ends, Coldplay sings at the end of a day that’s been more day than I can handle. And all I want is more such days, a million more such days, to be with those I love.