The Best Thing That Happened This Week: No More Fun for You, Mascots!

Oh, wait, that was the worst thing … 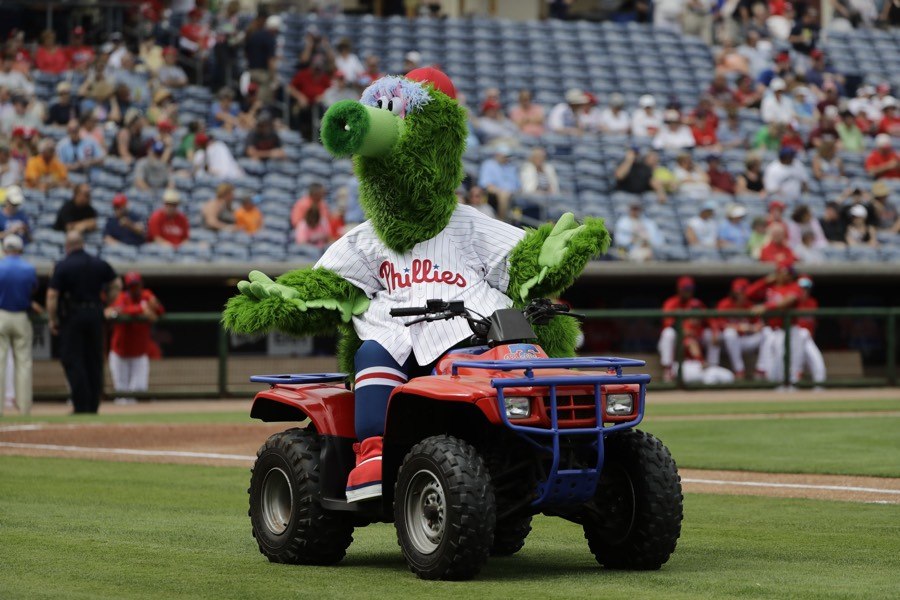 There was a time, not so long ago, when team mascots were comical dopey-looking creatures who made kids at sporting events laugh by shooting t-shirts into the bleachers or shaking their big fuzzy butts. That was in the old days, when people knew how to have fun. Alas, the termite of supergravity has bored so deeply into our heartwood that pheckless phrolicking is now phrowned upon. (Okay, we’ll stop.) A father recently claimed that the city’s newest star mascot, the Flyers’ Gritty, had assaulted his young son. The Atlanta Hawks’ Harry the Hawk missed a bleacher-to-bleacher jump and took a bench to his, well, nether regions that left him on “nest rest” for a week. The Phillie Phanatic has the unfortunate distinction of being the most-sued mascot in the big leagues. (The Phanatic has also, perhaps not coincidentally, repeatedly been named the nation’s number one sports mascot by sports fans. Sometimes you have to be willing to go out on a limb.)

Naturally, thanks to these and other travails, a National Mascot Association has been formed, so large hairy pranksters (motto: “Fuzzier together, safer together”) can share best practices with one another. That’s not going to save the Phanatic, though, who’s currently embroiled in a nasty lawsuit/counter-lawsuit between his creators and the Phils, who last Sunday unveiled a tweaked version of the Great Green Thing intended to resolve an arcane dispute over the copyright to the six-foot-six Galapagos Islander.

With everything that’s gone wrong with this city’s sports teams of late, can we not have one single thing that’s pure, that’s right, that’s above the petty bickering of mere mortals? Why should the Phanatic have to put on new socks (not to mention a new butt, wings and a blue tail) just to save the team some bucks and the trouble of more litigation? Gracious sakes, is nothing sacred anymore?