Madonna Reviewed: Her Madame X Show at the Met in Philly Is a Beautiful Failure 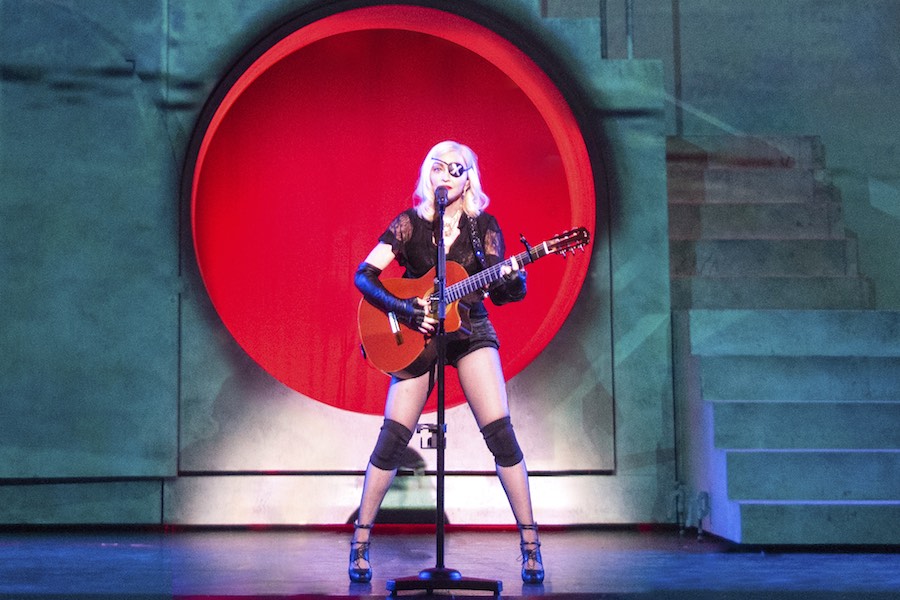 A previous “approved” photo provided for this review of Madonna’s Madame X show at the Met in Philly, since no photography was allowed at the show itself. (Photo by Stufish)

I wasn’t sure that I was going to be able to write a review of Madonna’s Madame X show at the Met in Philly.

The 61-year-old pop icon’s Madame X Tour was scheduled to hit only eight cities in the United States, and Madonna canceled or postponed shows in four of those eight cities. Most recently, Madonna canceled all three of her Boston shows, which had been scheduled for November 30th through December 2nd. She cited medical issues.

The unusual number of cancelations hasn’t been the only issue with Madonna’s Madame X Tour.

Ticket sales haven’t exactly been stellar for a woman who has sold hundreds of millions of albums, singles and downloads in her career.

As of Friday, scores of face-value tickets for the Saturday-night show — the opening night of a four-night run at the Met, which has a capacity of just 3,500 — were still for sale. That’s not counting the scads of “verified resale” tickets available on the official ticketing site, and there are many, many tickets still for sale for Tuesday and Wednesday night before she darts off to Miami Beach for seven Madame X performances.

There’s also a strict and unusual policy against cell phones at Madonna’s shows on this tour. Oh, and your Apple Watch isn’t allowed, either. Concertgoers must lock their phones and smart watches in Yondr cases, which are opened by staff at the end of the show. And ladies, we hope you don’t have big purses, because you’ll be out of luck. Only “small clutch bags” are allowed. Bag check isn’t guaranteed.

If the cell phone policy and security issues aren’t enough to make you say ugh, the Madonna shows at the Met are all scheduled to start at 10:30 p.m.

Now, I don’t have any scientific evidence for this, but I’d say that a start time of 10:30 p.m. — including for midweek performances — for an artist whose main fan base isn’t exactly the age of the Billie Eilish set can’t help morale or ticket sales.

Originally, shows on the Madame X Tour were “scheduled” to start earlier, but Madonna has a tendency to go on late (sometimes hours late), and after the published start times were changed in some cities, a fan actually filed a class-action lawsuit against her.

I asked several likely Madonna concertgoers I know if they were planning to go to see her at the Met, and they all said no, citing some of the above concerns.

“How is my babysitter supposed to call me if my phone is locked up?” asked one.

Others took issue with the schedule.

Madonna’s ticket prices were also mentioned, but I don’t think that’s a fair critique. Sure, you could pay $1,300 for a resale up-close-and-personal seat near the stage for Madame X. But there are also some sub-$100 tickets available, and there’s not a bad seat at the Met. And if you’re a real Madonna fan, seeing her in such a small and intimate venue, when she normally plays spots like the cavernous and impersonal Wells Fargo Center, should be a must.

Well, all those naysayers who didn’t come to see Madonna at the Met on Saturday night missed out on, well, an experience.

Let’s start with the good.

First of all, the venue. The Met is a truly magnificent place. The restoration is stunning, the sound pristine. I found the staff to be friendly and helpful. (How often can you say that about a concert venue?) And not standing in line all night for drinks is a bonus. They’ve really got this figured out.

Madonna herself? She still has it. Her voice was solid. Even luminous at times, thanks in no small part to her team of engineers. And though it was obvious that she was being physically cautious due to recent injuries, the old gal still has moves and uses them to great effect.

She clearly subscribes to the practice of surrounding herself with excellence, because the dancers and musicians who performed with her all exuded it, from the choir to the all-female Orquestra Batukadeiras from Portugal to the many other embarrassingly talented people who took to the stage on Saturday night.

Finally, while I agree that the no-phone policy can be annoying in one sense, watching Madonna without a sea of illuminated screens and distracted fans definitely outweighs any annoyance that comes with being detached from your phone. Banning phones allowed all of us to witness the theater of Madonna in the way that she intended.

Alas, the theater of Madonna just doesn’t work as a piece of theater, and great theater is clearly what she is trying to achieve.

The main problem, I think, is Madonna.

If you look at the credits for the Madame X Tour, you’ll see that the show was created and directed by, yep, Madonna. But what the show actually needs is a real director, some discretion, and somebody who can keep things on track.

I don’t know exactly what time the show began. Curtains were supposed to go up at 10:30 p.m. At some point around 11 p.m., an announcer said that the show was delayed due to technical difficulties (a dubious claim), eliciting groans from audience members. A friend in attendance who was wearing an actual watch later told me that Madonna went on shortly after 11:30 p.m. She played until close to 2 a.m. People were pissed. Exhausted. I saw a lot of people leaving well before the show was over, including one music writer who had been taking notes earlier in the night.

The show is simply too long. And, I’m sorry, Madonna, I love you. I really do. But the late-starting thing is utter bullshit. Get over yourself.

There is too much material — some of it straight-up filler — and it is presented in such a meandering way, that any sense of flow, arc, or climax was continuously undermined, robbing the evening of impact. This is why you hire a director and yield all that control you’ve been used to for decades.

That director would probably chop the show into two sets and order it in such a way that the audience gets the message — well, in this case, messages — that you are trying to communicate. A great director could transform the show from a concert with some really cool theatrical elements into an evening of beautiful theater.

Madonna on Broadway. It can happen.

As for you, prospective audience member, if you’re sitting there wondering whether you should go see Madonna’s remaining Madame X shows at the Met in Philly — or in Miami, if you’re lucky enough to be there next week — the answer is maybe.

If you are a huge Madonna fan and have never missed a tour and have actually bought all the new albums she’s released over the years, then you must most definitely go see Madonna. Yes. A thousand times yes. It’s a flawed show, but it’s also like nothing she’s ever done before.

Now, if you are the type of person who is prone to saying, Skip the sermon and just sing your frigging song, this is definitely not the show for you — particularly if you lean to the right. Madonna has a ton to say. She says it in her songs. She says it in her diatribes between songs. She takes on issues like abortion, Donald Trump, and gun control. You’ve been warned.

And if you are expecting a greatest hits show, I advise you to save your money. There’s a lot of newer material. There’s much more 21st-century Madonna than classic Madonna. In short: you will not hear “Like a Virgin,” “Material Girl,” “Borderline,” etc., etc., etc.

Speaking of saving money, here’s my last piece of advice regarding Madonna at the Met. My tickets, provided by Madonna’s tour managers, were in the center orchestra section, about eight rows back from the stage. Resellers are trying to get as much as $1,500 each for seats in this general area.

But shortly after the show began, I decided to relocate upstairs. I wandered around a bit and took in most of the performance from the mezzanine and balcony areas.

While you won’t get to fist-bump Madonna if you’re up there, as happened to a friend of mine who had tickets on the floor, it provides a much better perspective for the theatricality of the show. So you can see Madonna at the Met tonight for hundreds or thousands of dollars, or you can see Madonna at the Met for $95. Your choice. Just be sure to drink a cup of coffee.