Yes, he winds up snoring during the football game after two helpings just like the rest of us. 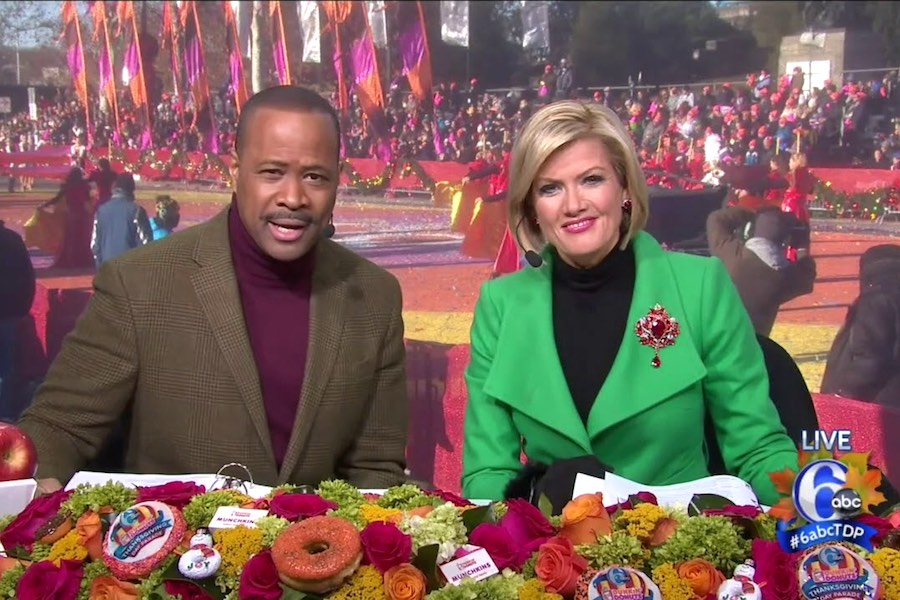 I just recently learned the Philly Thanksgiving Day Parade turns 100 this year, making it the oldest Thanksgiving Day parade in the country. How many of those years have you been hosting?
This will be my tenth year. Cecily’s been doing it a little longer than me. She took over from Lisa Thomas-Laury.

Are you up on the history of the parade?
I’ve been learning more and more about how it all got started. It’s pretty fascinating. We actually just did a special on the history on Thursday night, and while doing that, I learned quite a bit. It’s been a real education.

Any favorite moments stand out from your 10 years?
It’s always been really great, because my family comes every year — my wife and my son, and I’ve had in-laws show up. And every year is kind of special in its own way. But there was this one year — it may have been three years ago, I’m not sure — where we had really nice weather. It was clear. And then as soon as Santa Claus and Mrs. Claus arrived, just at that moment, it started snowing, and it made for this surreal moment along the Parkway.

What I really want to know is: How do you get into that tent, where I hear it’s all-you-can-drink hot chocolate?
Well, you gotta have a VIP pass for that. If you know me, I might just be able to get you in. [Laughs.] Some years, there is a big demand for that hot chocolate.

How are we looking for this year? What’s Cecily saying?
I think it’s going to be pretty warm, in the 40s or low 50s. Wednesday is supposed to be rainy. Thursday could be blustery, and that can impact the big balloons in a major way. We’ll see.

I’m sure that putting together a parade like this comes with its challenges and a fair share of unfortunate incidents. Any disasters come to mind?
[Laughs.] There have been times when certain balloons did not have the helium that they needed and they are impacted by the wind. Let’s say that they’ve been a little more down to earth than they’ve wanted to be on Thanksgiving.

Other than the regular balloons, marching bands and dance troupes, anything new to expect this year?
Actually, we have Macy Gray performing this year. She’s a big get. And Aloe Blacc. He’s a big get, too. So I look forward to hearing from them. And there’s Kathy Sledge from Sister Sledge. She’s a Philly girl, went to Temple. Some of the best performances are from right here at home.

The night before Thanksgiving is said to be one of the biggest drinking nights of the year, but I’m guessing you won’t be hitting the bars too hard on Wednesday.
No, I’ll try to be in bed by 10. We stay at a hotel the night before and have to be down in the lobby by 6:30 in the morning. Maybe I’ll have a glass of wine at the hotel the night before. Otherwise, I’ll just save the drinking for the holiday.

Speaking of the holiday itself, what does the Williams family do after the parade?
We’ll do the usual thing. A big family dinner. Normally, this is at my house, but this year, it’s going to be at my stepdaughter’s house. She’s getting married in a few weeks, and I guess she wants to kick off her new life on the right foot.

If you’re not hosting, I’m assuming you’re bringing something. What are you making?
Me make something? [Laughs.] I just make reservations. I’ll bring a few pies, probably. Really, I just look forward to seeing my family and watching football. I’ll have a couple of helpings, find my favorite chair, and I’ll be snoring before the game is over.