Amanda Olsen says she was inspired to start Givzie by her two sons and all the “cheap plastic crap” they received (and gave) at birthday parties and on Christmas. 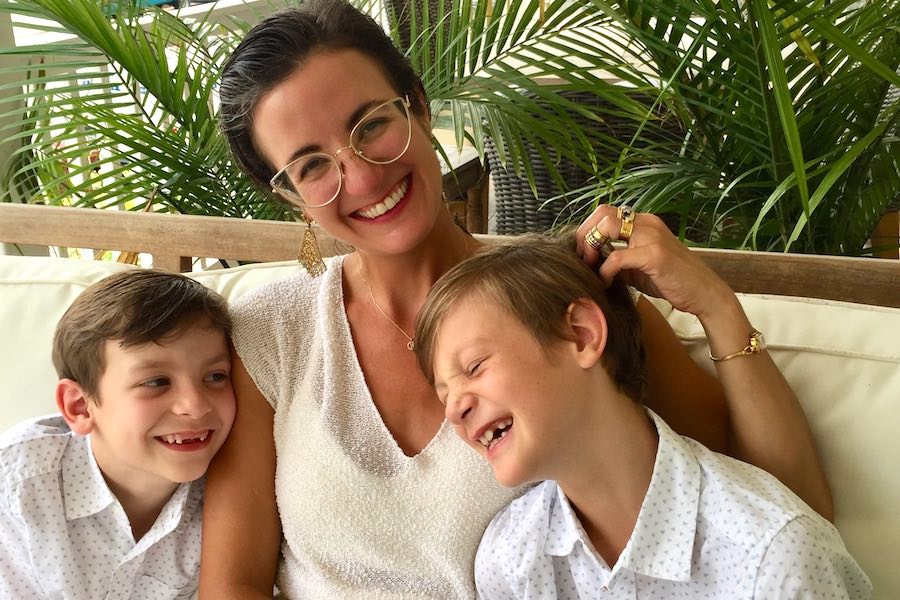 If you’re like the average American, you’re probably going to be doing some holiday gift buying in the coming days, which means long lines and way too much time on the Internet. But before you do all of that, you may want to know about Givzie, a Bala Cynwyd–based start-up that wants to completely flip the script on the way you buy gifts.

Givzie calls itself “a collective gift giving company.” It’s part online wish list, like the gift registry at FindGift.com that my mom so annoyingly forces us to use each Christmas. And it’s part crowdfunding, like Kickstarter, GoFundMe, and the rest.

Let’s say your kid is invited to a classmate’s birthday party at SkyZone with the 23 other kids in her class. She’s not really friends with the birthday boy, but she likes SkyZone. And pizza. And so, en route to SkyZone, you stop at Target and buy some random $20 item that you think a second-grade boy would probably like even though you don’t know any second-grade boys. You go to the checkout aisle and realize you forgot a gift bag, so you go get one of those. Maybe Ninjago-themed. I dunno.

Eventually, you make it to the party. The gift is added to the pile of other last-minute $20 items from Target. Well, or 5 Below gifts if you’re gonna really cheap out, but it’s a SkyZone party, so you probably shouldn’t. Point is, your random gift makes it to the birthday boy and a week later, that random gift is most likely broken or forgotten. And you have wasted your money as well as an opportunity to give a lovely child a gift that might actually inspire them — well, or at least an opportunity to give a kid a gift they’d like.

This is the problem that Givzie seeks to solve.

So rewind all of that. Before birthday boy’s mom sends out the invitation, she asks him what he’d really love for his birthday. Something bigger. Something grand. He thinks about it for a while and comes up with the 6,020-piece Lego Harry Potter Hogwarts Castle, which retails for $400.

Mom is never going to buy that for him. After all, she’s already dropping major coin on trampolines, pizza and juice boxes, and she knows full well that he’ll build the castle in one weekend and then he’ll dismantle it and there will be 6,020 Lego pieces strewn all over the living room.

But what if mom could tap into the pool of other partygoers, whose parents are all perfectly happy to spend $20 on her kid’s birthday and who would probably rather avoid the last-minute Saturday trip to Target anyway?

Mom opens an account on Givzie and launches a campaign for the Lego set. (Campaigns can be public or private.) When the invitations go out, they include a link to the Givzie campaign and a line like, “He’d love the Lego Harry Potter Hogwarts Castle for his birthday, so please feel free to contribute to the big gift on Givzie in lieu of an individual gift.”

Voila! You get to skip Target. The kid gets an amazing Lego set. And Givzie gets an 8.9% administrative fee plus 30 cents on each transaction — the gift contributor pays all of that — which adds up to $2.08 on a $20 contribution.

“That’s less than what you’d spend at Target, when you consider taxes, a gift bag, and your time,” says Givzie founder Amanda Olsen. “There’s a huge convenience factor here. You just click and go.”

Olsen explains that the idea for Givzie originally came from all of those birthday parties just like the hypothetical one described above that she attended over the last several years with her sons Vaughn and Anders, who are now 8 and 9, respectively.

“Most of the toys at those birthday parties just wound up in a landfill,” Olsen laments. “These kids are growing up in such an environmentally fragile time, and we’re just adding to that. So I was like, why can’t I just give my money to something that the kid really wants? That would make me feel so much better. And then the poor parent doesn’t have a gigantic bag of cheap toys to tote home from the party — toys that the kid probably doesn’t even want.”

The idea began solidifying after Vaughn, who likes dressing up in costumes, found a dragon costume that he really wanted in a catalog. The whole thing came to about $300, and when it came time for his birthday, Olsen suggested to the parents of his friends that they just chip in on that, and guests brought $20 to the party. She did the same thing for a Lego set for Anders. And then she sat down and figured out how to turn the idea into a website that anybody can use — and that’s a little less awkward than a parent showing up at a birthday party with $20 toward a present.

Olsen says that aside from material objects like the $300 dragon costumes and expensive Lego sets, some families might set up a Givzie for family memberships to places like the Philadelphia Zoo, the Franklin Institute or the Please Touch Museum. You’re probably not going to fork over $250 for a Philadelphia Zoo deluxe membership, but you might be much more likely to collectively chip in $20 or so for the cause.

After learning about Givzie, I’ve asked a bunch of parents what they thought about the idea, and everybody seems to love it. As a parent of two kids — they are 12 and 13 — I’ll surely be using Givzie in the future.

“Everybody gets a feel-good from it,” says Olsen. “You’re reducing waste and consumption. And people are receiving gifts that they really want.”

Maybe my son will finally get that Lego Death Star. Maybe.