Don’t Get Spooked by This South Philly Halloween Decor

Point Breeze resident Joeanne Broaddus on her very realistic Halloween decoration, and how this isn’t the first time she’s displayed a fake dead body in the name of holiday spirit. 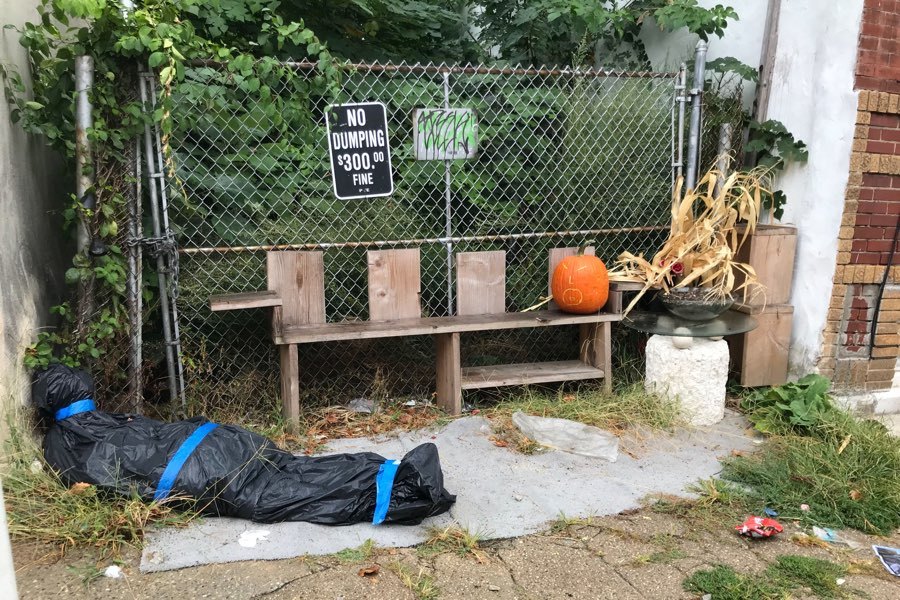 This trick might treat passersby to a heart attack. But don’t worry: the body’s fake. Photo by Ryan Mulligan.

You know how they say less is more? Well, enough with all of those over-the-top, baroque Halloween displays bursting with stage lighting, fake spider webs, ornately carved pumpkins, blood-soaked zombies. Sometimes all you really need to make an impression is … a dead body.

That’s the route 41-year-old Point Breeze resident Joeanne Broaddus took earlier this month, when she set up a fake body, wrapped in some black plastic and blue masking tape beneath a “No Dumping” sign (classic South Philly touch), in front of a vacant lot near her home on the 2000 block of McClellan Street.

You can imagine what happened next: People started freaking out. (Can you blame them?) Part of the confusion may stem from the fact that at first, Broaddus took a truly minimalist artistic approach to her decoration. She’d deposited the faux dead body, with no other Halloween iconography, beneath the no-dumping sign. She’s since added a pumpkin.

If you haven’t yet put up your Halloween decorations this year, you may as well give up. We’re ready to declare Broaddus’ work the year’s creepiest. We spoke with her to hear more about her inspiration.

So when did you put this decoration up?
Probably about the first of the month.

How’d you get the idea?
Well, I love Halloween. On the internet, I seen these two skeletons carrying a dead body. So I was like, you know what? Maybe I can put a dead body out with the plastic wrap. Usually people do a regular body with pants and a shirt on, and probably the head hiding somewhere.

So you went with more of the full-on realism approach.
Yes.

It’s sort of disturbing-looking if you don’t know it’s a Halloween decoration.
That’s why I put a pumpkin out there. People was stopping by, scared. That’s what I want — but I don’t want them to be thinking it’s a real body. So I put a pumpkin out. It’s still scaring people, though. They’re stopping cars, walking by, taking pictures.

What’s the inside of the body made out of?
I’m a hairstylist, so I had a mannequin head, and some old clothes of mine.

What do the neighbors think?
It’s in front of a vacant lot — and I clean up this lot, so I’m gonna stick my dead body in front of it. The house next door to the lot asked, “Can you move it?” I said, “Lady, I’m not on your property, and it’s Halloween!” I can’t move it.

So I take it this is a typical thing for you, decorating like this. What sort of past decorations have you done?
Well, two years ago, when I lived two blocks up the street, [I did a similar thing]. I had clothes on the body last time, but I had the head hiding. I had the body hidden halfway behind a container.

What does your family think about all this?
My 25-year-old, he’s not in Philly. My three-year-old doesn’t even know what he’s looking at.

Has this body gotten more reaction than others in the past?
Yes, this one in the bag got more reactions than the other one.

Why do you think that is?
Because it’s wrapped in all plastic. It does look seriously real. You can’t see nothing but the head being taped up, the body being taped up, the feet taped up. I just love Halloween. Just talking about it makes me happy. I’m 41 and I’m like a big kid — I love it.