After shirtless photos of him went viral, we had questions. 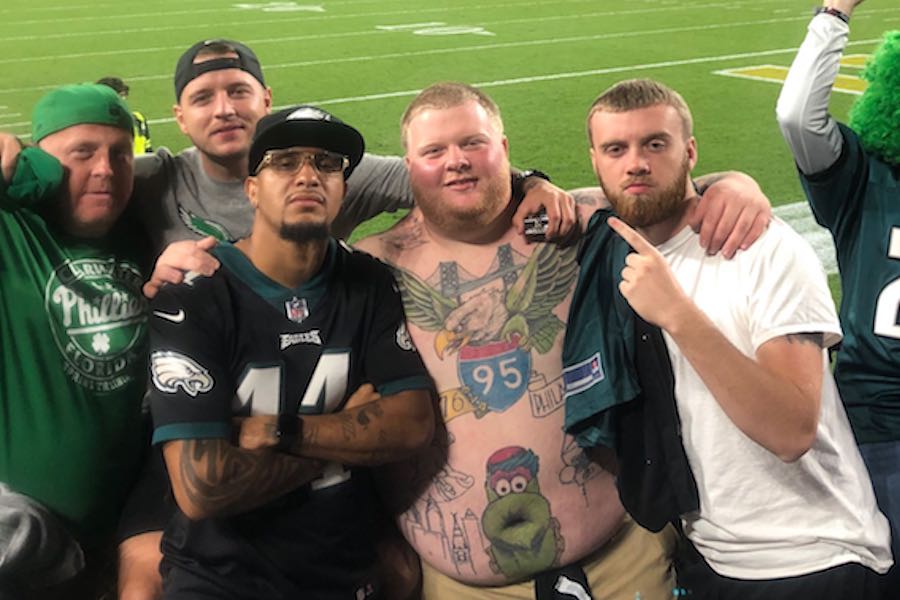 If you were watching the Eagles decimate the Packers on Thursday — or if you’ve been anywhere near social media anytime since — no doubt you’ve seen the photos of Rob Dunphy, the Eagles fan with all those Philly tattoos all over his chest. We caught up with him on Friday afternoon on his 14-hour drive home.

PM: So you went to the Eagles game and then all of a sudden you’re the world’s number-one Eagles fan. Well, number-one Philly fan, really. How does it feel?
RD: It’s insane, dude. It doesn’t even seem real. My phone actually died before I even got to the game, and then my friends and all of these people are telling me that I was on TV and all over the Internet.

What does Rob Dunphy do when he’s not shirtless at Eagles games?
I’m home with my family. I’m currently unemployed. I was working for the gas company for a while. I have a bunch of applications out there. I’d love to do anything involved with sports. Especially anything where I’m a sports fan that travels.

I think what we all want to know: Where is the Gritty tattoo?
It’s on its way. I had a baby two months ago, so Gritty is on hold for a little bit. It will cost me about $1,000. I’ll get it under 95 and above the Phanatic.

Favorite tattoo?
Well, I gotta say the Eagles one, but the Phanatic, too. They’re tied neck and neck. 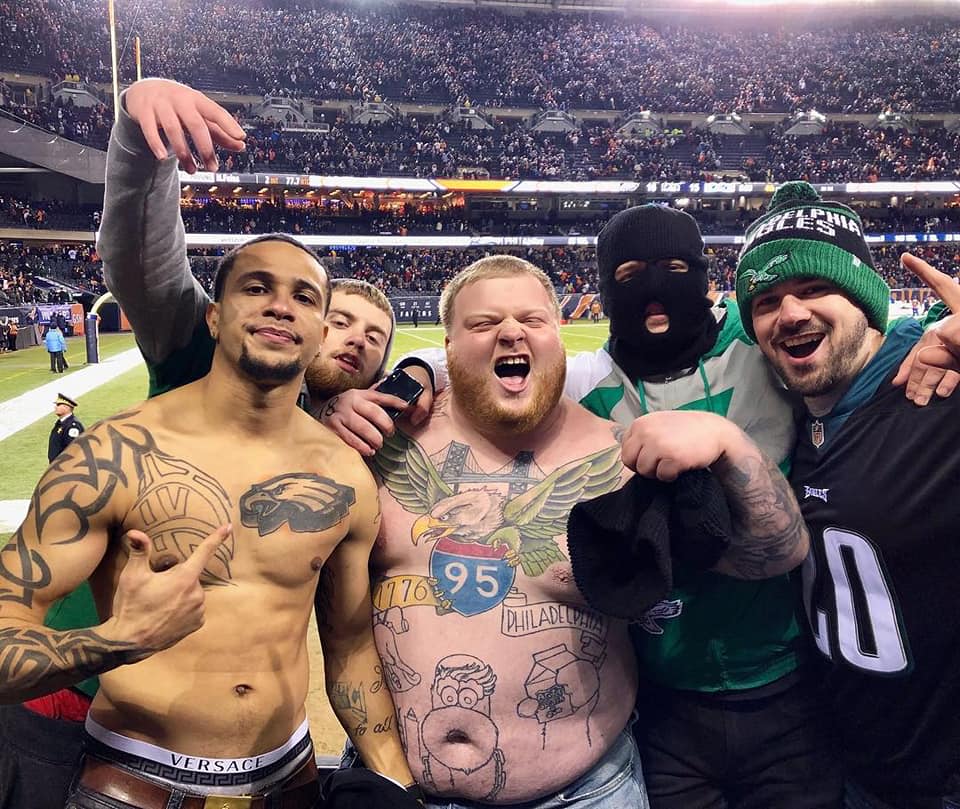 Rob Dunphy, the Eagles fan with all of those Philly tattoos, before the Phanatic tattoo was filled in. (Photo courtesy Rob Dunphy)

What’s on your back?
My last name. That’s it.

What was your first tattoo?
I got one on the back of my leg for my grandmother that passed away.

Where do you get your tattoos done?
215 Inkwell by Mike Nemo. It’s at like Frankford and Cottman.

There’s some great work there, but what’s up with the skyline?
It’s just an outline. It’s not finished. I got all of these tattoos on my chest outlined at the same time, about three years ago. Once they get detailed, they come to life. And I need to add the Comcast building.

Back to the game, you got pretty killer seats.
Well, we were originally in the top section, like 300, and then we saw these tickets online last minute and got second row for $140 a ticket.

Is the stadium as loud as it seems on TV?
Not at all. Seattle is louder than this. Green Bay is nothing like the Linc. We are way louder.

So, you’re a guy with Philly and Eagles tats all over you. Did you have any issues with the Green Bay fans?
No. They were friendly. I have to say, they were really friendly.

What happens once you get back to Philly?
Who knows? I’m going to sleep. And then on Sunday, I’m going to the Phillies game and doing an on-field skit with the Phanatic.

What does your family think about all of this?
They think I’m completely crazy.

Do you always have your shirt off at Eagles games?
Yes, ever since I went to the Vikings game for the NFC Championship. And when I went to Chicago last year for the playoffs.

Best Eagles player of all time?
Tough. I can only base it on who I have seen. I would say T.O., but he wasn’t here for long enough, really. I’ll go with Dawkins. Now, Fletch. Without a doubt.