Inspectors from the Department of Licenses & Inspections descended upon the fest’s popular pop-up cabaret bar in South Philly on Wednesday night. 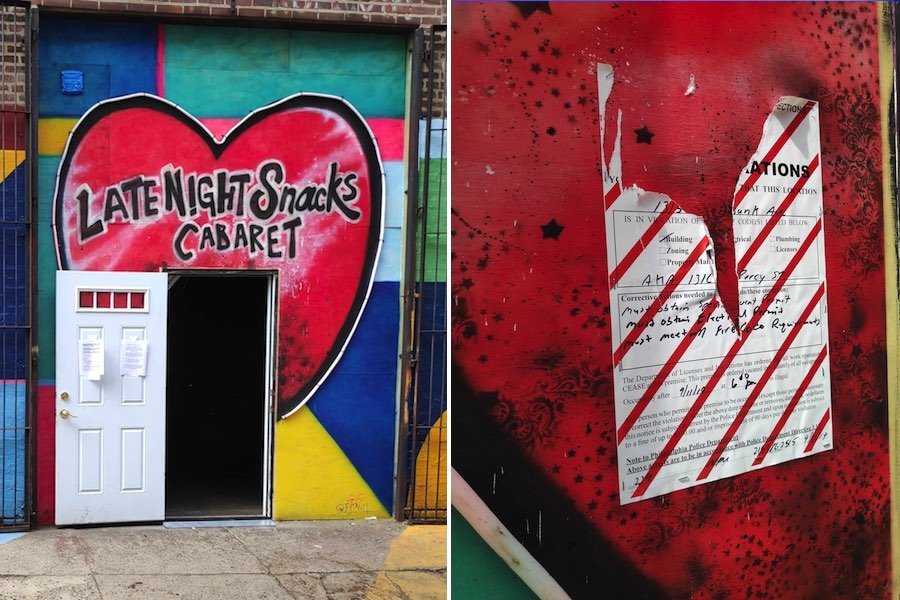 Left: The front of Late Night Snacks Cabaret, the popular Fringe Festival pop-up bar and performance space in South Philly. Right: The L&I cease operations sticker (well, part of it) on the other side of the front door. (Photos by Sam Trilling)

Update: On Thursday evening, Fringe Festival organizers stated that the South Philly venue for Late Night Snacks is again operational and that “all future Late Night Snacks performances will take place there as planned.” Later on Thursday night, they said that the venue would reopen on Friday instead. Philly Mag was not immediately able to confirm this with the city.

One of the most entertaining aspects of this year’s Philadelphia Fringe Festival is Late Night Snacks, the popular pop-up cabaret bar in South Philadelphia. Each night during the festival, a who’s who of Fringe Festival talent performs while Fringe lovers and performers who just got out of their own shows congregate to be a part of the mix. But on Wednesday night, the city put a wrench in the works.

Late Night Snacks is set up in a converted auto body shop on the 1300 block of South Percy Street, just steps away from Pat’s Steaks. Inspectors from the Department of Licenses & Inspection visited the Late Night Snacks venue on Wednesday and issued a cease operations order. The Wednesday edition of Late Night Snacks was forced to move to La Peg, the restaurant and performance space at FringeArts headquarters on Race Street.

“Well you can’t make a cabaret without breaking a few eggs!” Late Night Snacks organizers announced on Facebook on Wednesday after L&I showed up. “We’re working to resolve some lingering unexpected space surprises but we’ve had to RELOCATE tonight’s performance.”

According to Karen Guss, spokesperson for L&I, any use of a space like this for a temporary purpose requires a TCO, short for temporary certificate of occupancy. Guss says that the TCO process was developed by L&I largely because of the Fringe Festival and its performers’ need to repurpose spaces in a creative way.

“The idea is for the city to fulfill its responsibility to check that basic safety and accessibility requirements were being met without forcing [Fringe] Festival participants to go through a full-blown zoning and building permitting process,” she explains.

L&I asks that applications for TCOs come in at least 20 business days prior to the start of the event. In this case, Guss says, the application was filed eight days in advance of the Late Night Snacks kickoff.

“Due to the numerous and important gaps in the venue’s initial submission and the fact that performances were already taking place at the venue, L&I sent inspectors to the property on the evening of September 11th to check for safety issues,” Guss tells Philly Mag. “L&I contacted the operator of the venue to inform them of the concerns and to make an appointment for an inspection.

“As a result of the numerous serious safety violations at the venue, a cease operations order was issued and the premises closed. L&I joins the venue, performers, and patrons in hoping that the safety issues can be promptly addressed and the venue reopened. L&I has been in frequent communication with the operator since the inspection and has advised on next steps.”

Guss provided Philly Mag with a report on those safety violations. The report includes the following: “improperly located and installed electrical panels”; “jerry-rigged wiring”; “a very real (and completely invisible) electrocution hazard”; “piles of combustible tire waste”; the lack of “two unobstructed exit doors with ‘panic’ (super-easy open) hardware”; lack of a properly certified fire extinguisher and of an emergency evacuation plan on site; concerns that paper and fabric hangings and decorations may not “meet national flame-proof/flame-resistant standards”; and the completely un-permitted use of a second floor.

“We take the violations seriously and are working hard to rectify the concerns as soon as possible,” a Fringe Festival spokesperson told Philly Mag in a statement. She suggested that it’s possible that the venue could reopen as soon as Thursday night. If that doesn’t happen, Late Night Snacks will take place at La Peg.