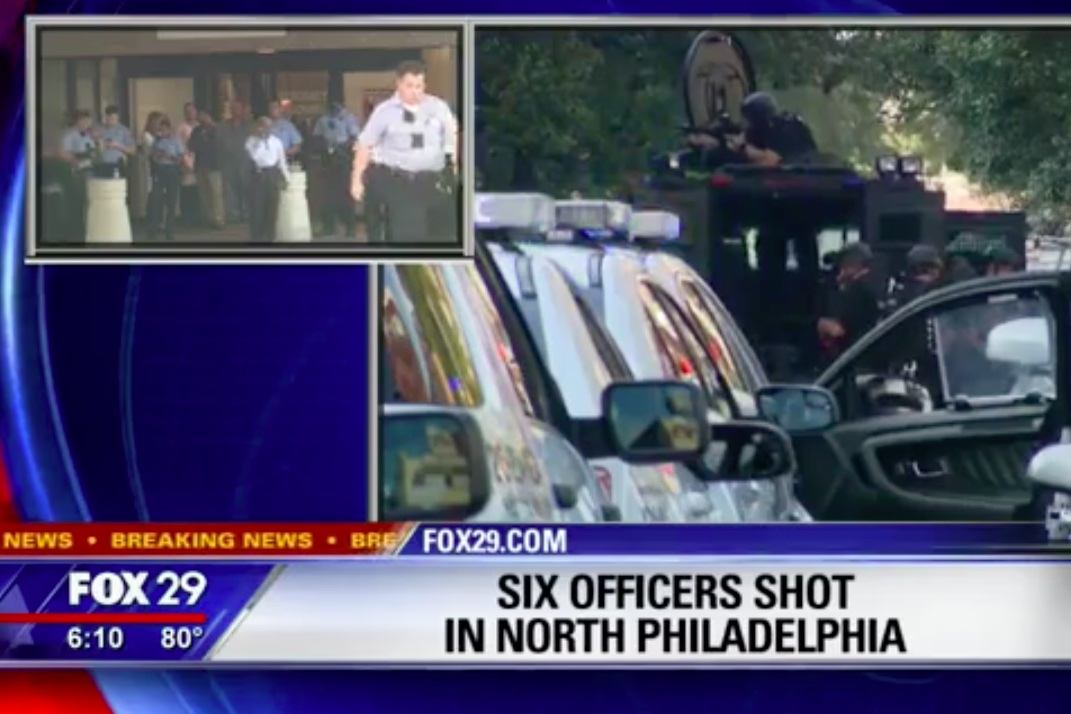 The Fox29 broadcast of a shooting in Philadelphia that left six police officers shot. Screenshot via Facebook.

There was a moment, early in the coverage of the shooting in North Philly on Wednesday — which left six Philadelphia police officers injured with gunshot wounds — that seemed to encapsulate everything wrong with local television’s reporting of live shootings: A news helicopter from 6ABC whirred above the 3700 block of North 15th Street, providing a live video of police officers crouched on the ground, guns drawn, taking cover next to a row of police and civilian cars. A black, armored SWAT vehicle pulled onto the street.

From that bird’s-eye view, police on the street were reduced to action figures. All sense of scale had been disrupted, and it almost seemed as if the scene playing out on screen — as officers occasionally sprinted for cover from one car to the next — was just that: a scene. Something straight out of Call of Duty.

The critical question, in any sort of of breaking-news situation, is this: What does the public need to know? What value is gained by showing police officers, on live television, army-crawling on the sidewalk and dodging gunfire? The strategy, and its effect, is obvious: It’s about producing entertainment masquerading as news.

But there is also a second, more immediate consequence to this chopper coverage of a live police scene (which, to be fair, is a trait endemic to lots of TV coverage beyond Philly). It outlines, in real-time, the positions of the officers in the path of gunfire. A 6ABC reporter made this quite clear at one point, reporting of the officers, “They have a position right now, where at least one of the SWAT officers is on top of the SWAT truck, getting a better view at the buildings.” (6ABC president Bernie Prazenica was unavailable to comment on the station’s reporting.)

Anzio Williams, vice president of news at NBC10, which had its own slate of chopper shots during the shootout, says his channel’s footage could never have hampered the safety of officers. “If we zoomed in on an armored truck, that did not give anything we thought was helpful. We have policies on not broadcasting information that would hinder a hostage situation,” he says. Williams also argued that his coverage was far from entertainment: “The work we did yesterday was a service to the community.”

Still, eventually it got to the point where the police department, tiring of the helicopters circling above like vultures, demanded they retreat:

MEDIA HELICOPTERS: PULL BACK FROM THE AREA – YOU ARE HINDERING OPERATIONS

But even as the helicopters followed orders, the TV stations remained active on Twitter, shooting off instant-updates. Early on, when it appeared only three police officers had been shot, Fox29 tweeted that one had been shot in the hands, another in the arm, and a third in the head. A gunshot wound to the head: It sounded deadly. Later, we would find out the officer had suffered a graze wound and would be fine.

This tweet-first, refine-later strategy of breaking-news leads to more than misleading information. In another tweet, Fox29 reported to its 601,000 followers that one of the officers was at the hospital in critical condition. But this was inaccurate: On Thursday, spokespeople from both Temple University Hospital and Einstein Medical Center confirmed that the officers they treated had always been in stable condition. Still, the tweet remains published, and the station never issued a correction. (After being made aware of the inaccuracy and other criticisms of its coverage, a Fox29 spokesperson wrote in a statement, “Fox29 stands by its coverage, both on air and digital.”)

A live shooter situation is of course highly volatile, with constantly changing information. But media experts say that is precisely why precision and accuracy — sometimes at the expense of speed — is paramount. “The highest priority ought to be the safety and security of people in the community,” says David Boardman, dean of Temple’s Klein College of Media and Communication. “So when you give an inaccurate or overly vague description of where something’s occurring, that’s a destructive and dangerous thing.”

Local television wasn’t the only type of media to err on this front, in Boardman’s view. Multiple national outlets, including the New York Times and the Huffington Post, wrote that the shooting was occurring near Temple University. This, Boardman himself noted on Twitter, was not strictly correct.

Yes, it is true that Temple Hospital and Medical, Dental schools are nearby. The main Temple campus is not. In these situations, especially, precision is essential. https://t.co/jM6nB99CeB

In some cases, even accurate information is better withheld — at least temporarily. Boardman says Fox29 reported, in real time, the suspected locations of two officers who had been trapped in the house where the shooter was holed up. “That was mind-blowing to me, in terms of putting the lives of officers at higher risk,” he says.

It’s not that Boardman — who himself oversaw Pulitzer-Prize-winning coverage of a breaking-news police shooting as executive editor of the Seattle Times in 2009 — doesn’t want all of the available information; he simply wants it once the story has finished unfurling. “After the fact I want as much detail as possible,” he says. “In the middle of it, it’s absolutely irresponsible.”

The debate over what the media ought to show and tell the public is, of course, one that has existed as long as there has been paper on which to print news. But new technology, be it TV screens or social media, complicates the equation.  “As technology keeps giving journalists and news organizations more opportunity to offer that eyewitness authority from the spot, we’ve lost sight of which kind of info we really need to know,” explains Barbie Zelizer, a professor of communication at Penn’s Annenberg School.

This is not to say that the media doesn’t have a responsibility to publish images that are occasionally unsettling, or even gruesome — photographs like the famed “Napalm girl” shot from the Vietnam War, or more recently, the photo of two drowned migrants on the bank of the Rio Grande river. But far from being slapped onto a screen immediately after they were captured, these images were ultimately published many hours later — and presumably only after significant discussion about their merits.

Meanwhile, back in Philly on Wednesday evening, we had a significant majority of city media pouring its resources into live-streaming an active shooter situation as if they were on Facebook. That made Zelizer wonder, “If everybody is being sent to cover the shootout, what isn’t being covered?”

In fact, there was something: ten miles away, in South Philadelphia, in what looked to be another murder for a city that’s already had 204 this year, a man was shot and killed.