All Those Maddening Fees on Your Comcast Bill, Explained

We investigated the (many) mysterious charges and figured out where they really go. 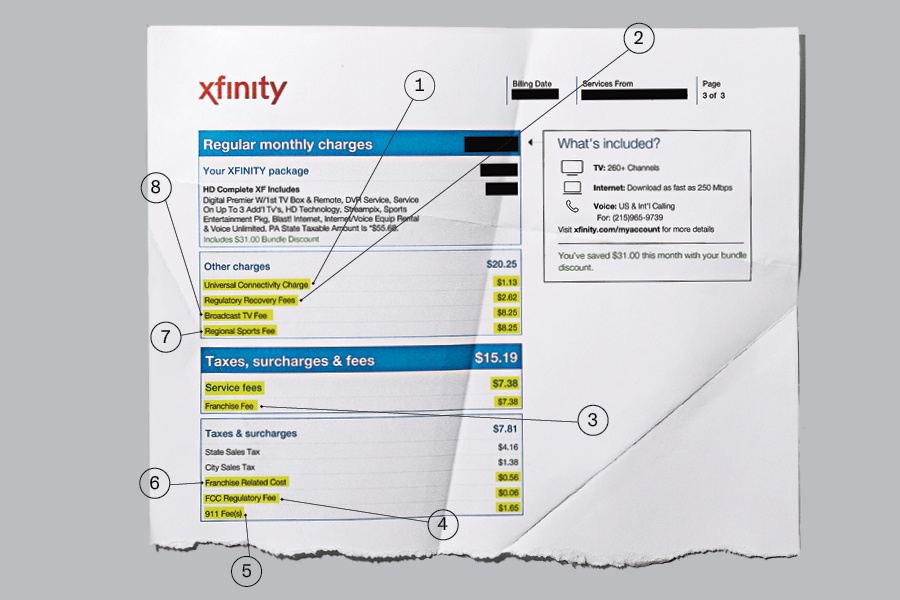 To ensure people living in low-income and rural areas have access to high-speed internet, the federal government set up a fund to which telecom companies are required to contribute. Per Comcast’s website: “The fee we charge you is not government-mandated, but these costs are outside of our control and so are passed through to our customers.”

This fee — which is related to voice services — goes toward costs imposed by federal, state and local governments. A company spokeswoman says these fees recover the “contribution Comcast makes to support the operation of the FCC.”

Every city in which Comcast operates negotiates a franchise agreement, which sets out what the city receives for allowing Comcast to provide services. Philadelphia’s was renegotiated in 2015, and the city got things like the launch of the low-income Internet Essentials program, discounts for seniors, and tech ed for high-schoolers. Comcast’s site notes, “The Federal Cable Act authorizes cable operators to collect from customers the full amount of franchise fees paid to local governments.”

The FCC collects money from operators so it can exist — and the FCC says it’s cool to recover those costs from customers.

We’re All Getting Screwed by Fees, Pretty Much All the Time

Every phone line is assessed a fee to fund 911. Best part? You also pay this on your cell-phone bill. Double dipping!

This is an additional charge based on any changes made to the original franchise agreement.

Like the Broadcast TV Fee, but for sports. It was added in 2015 and was originally $1. And as a Vice article pointed out last year, “Unmentioned by the company is the fact that Comcast owns the regional sports networks in many of its markets. … ”

When this fee was rolled out in 2014, it was $1.50. Comcast says it exists because local stations charge the company to broadcast their content. But isn’t that what the base fare covers? Also, this fee “can increase during your promotion or minimum term,” according to Comcast’s site.

Published as “A Bill of Goods” in the article “Death by a Thousand Fees” in the July 2019 issue of Philadelphia magazine.