American Flags Were Works of Art — Until Government Got Involved

Collector Jeff Bridgman — whose 13-star American flags are on exhibit through July 21 — on why pre-20th-century Stars and Stripes are the real pinnacle of U.S. vexillography. 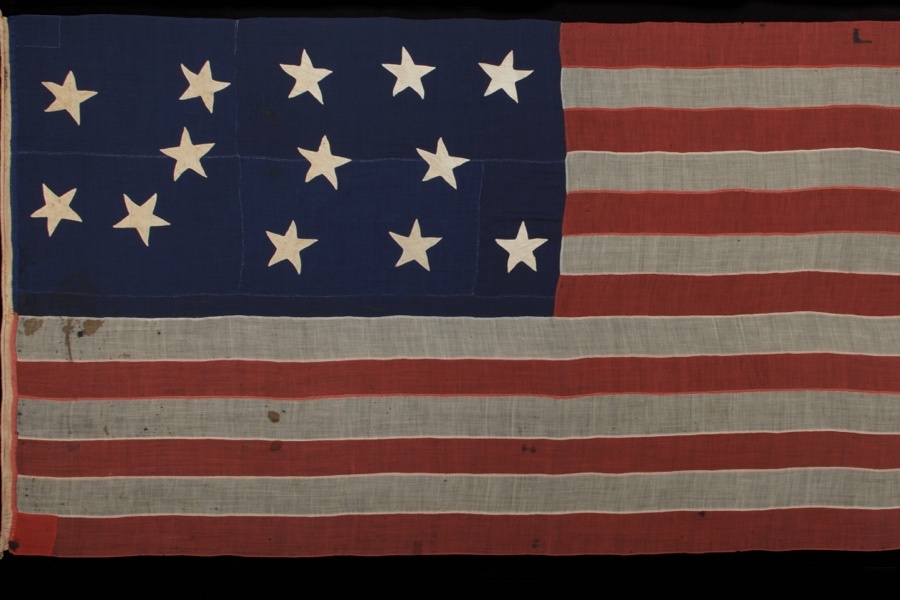 A 13-star American flag from the 1800s with no discernible pattern. Photo courtesy Jeff Bridgman.

Did you know that there is an entire section of United States federal law dedicated to what one can and cannot do to the American flag? Here’s a particularly precise excerpt, from 4 U.S. Code § 7., titled “Position and manner of display”:

“The flag should not be draped over the hood, top, sides, or back of a vehicle or of a railroad train or a boat. When the flag is displayed on a motorcar, the staff shall be fixed firmly to the chassis or clamped to the right fender.”

The whole notion of a codified set of regulations for a flag meant to valorize liberty is kind of odd — and, as it turns out, a relatively new invention, dating to the 1940s. But the flag wasn’t always stitched with this straitlaced legalese. In fact, during the 18th and 19th centuries, there wasn’t even an official arrangement of stars. The flag was inchoate — not unlike the country it represented — and each different arrangement was its own work of art.

Jeff Bridgman, an antiques dealer in York, has been accumulating these early American flags for years. His collection of 13-star American flags is now on exhibit at the Museum of the American Revolution through July 21. We caught up with him to discuss the origins of the flag, its gradual formalization, and how Old Glory’s glory days are long gone.

Not all of these 13-star flags date to a period when there were 13 states. If the flag is supposed to be a representation of the nation, why were people producing 13-star flags after the fact?
There were reasons both patriotic and practical for their use. The U.S. Navy, for example, flew 13-star flags on small craft. At a distance, if there were fewer stars, it was easier to discern than if they had the full complement at the time of, say, 35 stars. They become one big white mass. The flags were also made for all sorts of patriotic reasons, such as the final visit of Lafayette to America in 1825.  He was welcomed all over the country, with many parades and events and 13-star flags were displayed then. 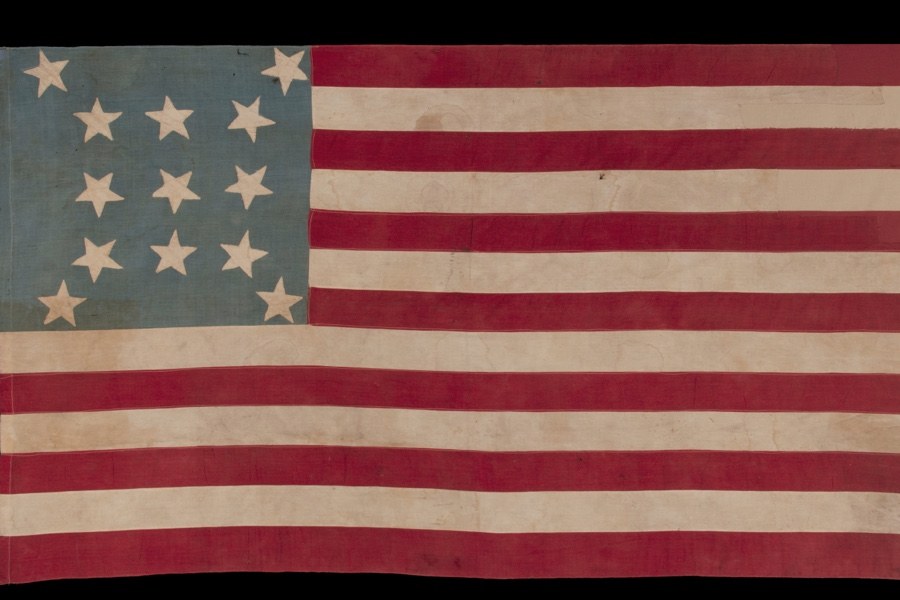 A 13-star flag, likely from the 1876 Centennial celebration. Photo courtesy Museum of the American Revolution.

A lot of these flags have peculiar and differing arrangements of the stars. Now the flag is treated as such a monolith and has all of these regulations that are attached to it. Was there less oversight back then?
The original flag act, passed June 14, 1777 — Flag Day — called for 13 stars in the form of a new constellation, and 13 stripes, alternating red and white. And that was it. Basically one sentence comprises the whole act. It remained that way until 1912, when Howard Taft, as president, passed an executive order that for the first time put an official configuration on the flag and an official number of points on the stars. There were no official proportions before 1912, no official shades of red and blue before 1912. The flag was up to the liberty of the maker. 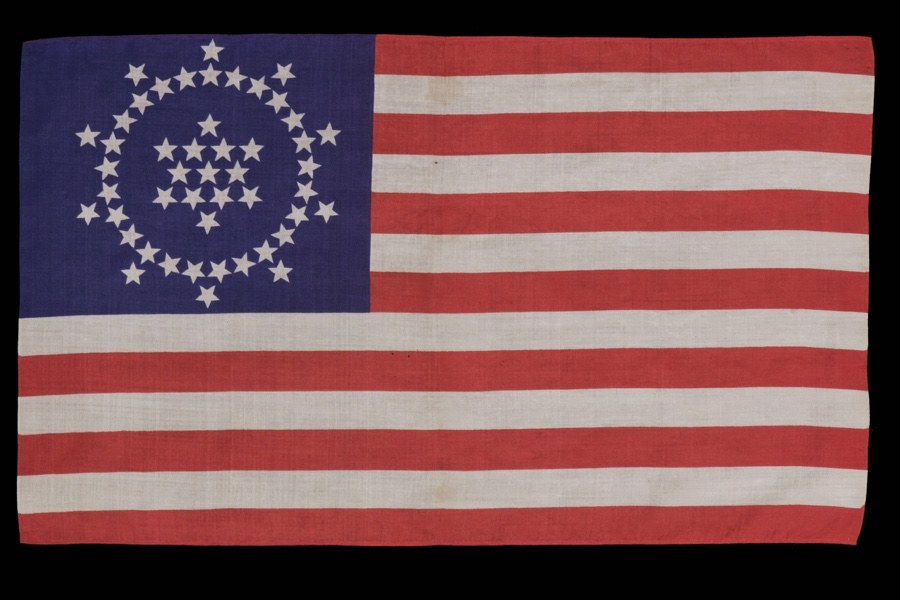 Can you imagine if the American flag looked like this? This 48-star flag includes the original 13 colonies in the center of the circle. Photo courtesy Jeff Bridgman.

Is there such a thing as too much veneration for this object, too much patriotism attached to this flag?
I don’t really think so. I think it’s a symbol of what we are as a nation, and what we went through. And that’s what people should be seeing when they look at it — not thinking about modern political discourse, or social issues, and trying to apply that to the flag.

If there’s one thing this country idealizes, it’s liberty. What do you think about flag burnings, then? It wasn’t always legal, but the courts have now upheld it as something people are allowed to do.
I think it’s a terrible thing to do and that people shouldn’t do it. But you know, this is America. It’s basically free speech, right? Part of the beauty of America is that we can do sort of anything that we want, within reason, as long as we’re not harming someone. There’s no flag police.

How do you think our flag stacks up to others out there?
I mean, the British flag is a beautiful object. Personally, I think nothing beats 19th-century American flags, when you could do whatever you wanted to with the stars. They’re amazing artistic things. When you had the liberty to do whatever you wished with the stars, and often with the stripes and colors and proportions, they’re just some of the best American folk art that exists — and, I think, better than any other nation’s flag that I’ve ever seen. The modern flag, I don’t want to say I don’t like it, but … row patterns don’t do much for me.