Kenney on Controller’s Voting Machine Objections: “I Don’t Know What Her Problem Is”

Days after the city took delivery of the first $664,000 worth of its new electronic voting machines amid repeated complaints about the procurement process — and without a signed contract — the mayor strongly defended the purchase. 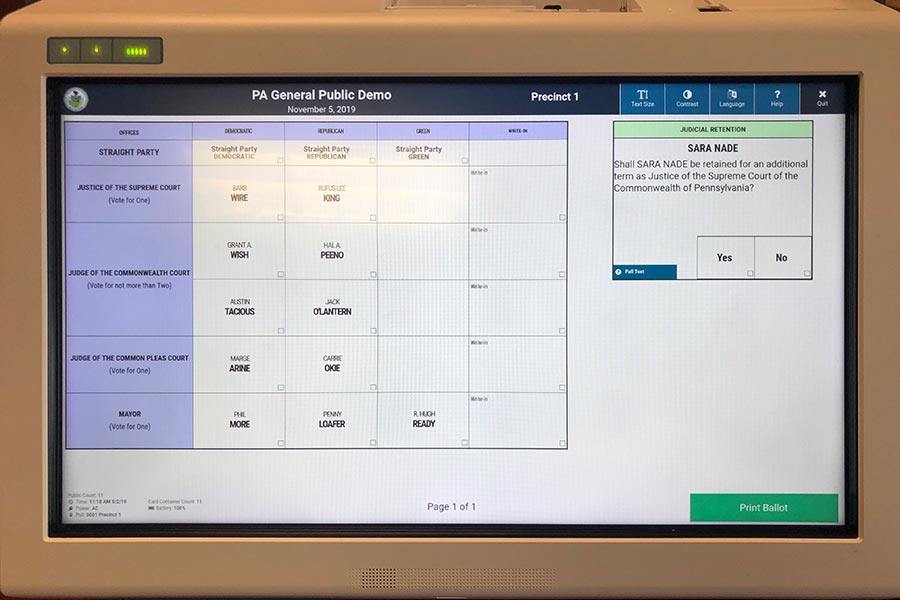 An ExpressVoteXL in demo mode at the City Commissioners’ Office. Photo by David Murrell

Mayor Jim Kenney has come out swinging in defense of the city’s looming purchase of more than $50 million worth of new voting machines that critics say are too expensive, susceptible to hackers, and the product of a tainted procurement process.

On Monday, the City Commissioners’ Office, which oversees elections, took delivery of 83 new ExpressVoteXL machines worth about $8,000 each, or some $664,000, without benefit of a contract, public vote, or any money appropriated to pay for it. City controller Rebecca Rhynhart has publicly pledged to block the purchase of the machines because she’s “deeply concerned about the legality of this process.”

“We believe we’re right,” the mayor insisted in a brief interview following a press conference on economic development at City Hall on Thursday. “We think she’s wrong; we did our due diligence. I don’t know what her problem is.”

At a Wednesday meeting of the county Board of Elections, city commissioner Anthony Clark stated that he personally “was not aware … that these machines would be here.”

“How these machines came, I don’t know,” Clark said. “Who’s paying for them, I don’t know.” At the meeting, Clark asserted that the delivery was in violation of the state Sunshine Law, because no vote had ever been taken by the commissioners.

“No decisions should be made without the board knowing what’s going on,” Clark said.

Kenney, however, blew off Clark’s comments by describing him as the guy who “doesn’t show up for work,” referring to past criticism of Clark for not attending meetings and for not voting in city elections.

The mayor described the delivery of the 83 machines as “a sample of what’s coming.” His spokesman, Mike Dunn, subsequently chimed in that the machines were needed for “hands-on training for poll workers” beginning “as early as next month.” With the upcoming November general election, Dunn said, it would be “frankly irresponsible not to get some machines in place so training can begin as soon as possible.”

Dunn added that “it is not uncommon for contractors selected through an RFP [request for proposals] to get the OK to proceed with implementation of a contract” before a formal contract is confirmed. He further stated that the Kenney administration “is confident that the process followed by the Board of Elections – and the team of folks across the government working on this project – was proper and fully vetted.”

The controller, however, is not backing down on her pledge to investigate. “I’m doing my job, and my job is to safeguard taxpayer money,” Rhynhart said, describing the delivery of the machines as “one more thing adding to a litany of things to be concerned about” in the city’s procurement process. “It’s not the way that things usually happen. The board of commissioners didn’t vote on this. There’s a lot of questions.”

Normally, before the city accepts delivery of new equipment, Rhynhart said, “there would be a contract [and] a purchase order,” as well as approvals from the controller, the finance department, and an appropriation of funds from City Council.

The controller has previously issued a number of subpoenas as part of her investigation of the city’s procurement process, subpoenas that she says the city has yet to fully complied with. “Right now, we have information requests out there and we have more going out,” Rhynhart said. “I’m not letting one dollar go out until this investigation is done.” (Mayoral spokesman Dunn did not reply to a request for comment on the city’s compliance with the subpoenas.)

One of the outstanding questions Rhynhart is looking at is whether the purchase of the voting machines, estimated on Thursday by the mayor to be $54 million, would require a bond issue to be placed on the November ballot so voters could approve it — a vote that would take place, according to the mayor’s spokesman, on the very same machines that the city plans to use for the first time in the November election.

A Philadelphia magazine reporter recorded a short demo of the machines on Thursday afternoon at the City Commissioners’ Office.

At Wednesday’s board of elections meeting, several critics ripped the delivery of the machines, as well as an appearance by city commissioner Lisa Deeley on Tuesday on NBC10, where she demonstrated the new machines.

Deeley, who is running for reelection, did not attend the board of elections meeting because she has recused herself from participating in any further business that might affect her own reelection.

But instead of staying out of the limelight, Deeley went on TV and “acts like she owns these machines,” complained Kevin Skoglund, of Citizens for Better Elections, who at the board of elections meeting publicly called on Deeley to resign.

On TV, Skoglund said, Deeley acted like the machines were “hers to bring in, hers to use as a prop for her own candidacy three weeks before the primary.”

“This seems like a campaign contribution from ES&S,” Skoglund said, referring to the manufacturer of the new voting machines from Omaha, Nebraska. “You supported us, we need you to keep our contract alive, [so] let us send you these 83 voting machines for free to help your campaign,” Skoglund told the board.

“Commissioner Deeley was elected to serve the residents of Philadelphia and is the chair of the department responsible for the city’s elections,” deputy commissioner Nick Custodio said in a statement. “Although she is fully recused from serving on the Board of Elections which has specific responsibilities under the Pennsylvania Election Code, she remains committed to her administrative and public relations roles as a City Commissioner and ensuring that all Philadelphia residents have the information they need to effectively exercise their right to vote.”

Other critics have voiced concerns about the involvement of Deeley’s former boss, City Councilman Bobby Henon, in a charter change approved by voters in 2017 that allows the city to employ a “best value” procurement process. Under the best value process, the city is allowed to bypass lower bids and slap a confidentiality order on the entire procurement process.

Henon, as well as his former boss, John “Johnny Doc” Dougherty, head of the city’s electricians union, have both been charged in an 116-count federal indictment for corruption, charges that both men have pleaded not guilty to. The purchase of the voting machines, Rhynhart has said, is the first significant use of the best value procurement process sponsored by Henon, who still draws an annual salary from Johnny Doc’s electricians union.

Near the end of the brief interview at City Hall, Kenney was asked whether he is at all concerned about a shadow being cast on the city’s procurement process by the federal indictment.

“No,” he declared. When asked why, Kenney replied that the charter change was “duly passed legislation.”

Is he personally endorsing the machines?

“I haven’t seen them,” the mayor said. “I don’t get involved in purchasing. It’s a new era.” And then he walked out.