We chatted with Faith XLVII about her plans for the outsized project — and what it’s like painting when you’re up so high. 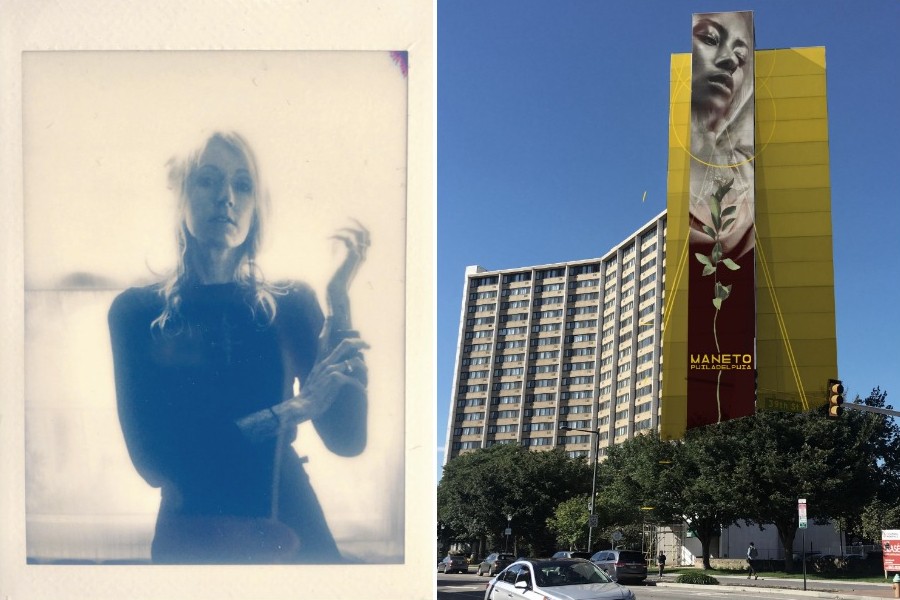 Mural Arts has announced a massive new project coming to the edge of University City and West Philly — an 11,000 square-foot piece decorating the side of the 19-story senior affordable housing complex located at 3901 Market Street.

Mural Arts will commission the Los Angeles–based visual artist Faith XLVII (pronounced Faith 47) for the project, to be titled Guardian. Faith, who is originally from Cape Town, South Africa, will begin work on the piece this August. She’s expected to finish up in the fall.

Jane Golden, executive director of Mural Arts, said the organization has sought to collaborate with Faith “for a long time,” praising her “bold but elegant style, the respect she gives to people she depicts,” as well as “her dramatic compositions and her use of black and white with slight color.”

We caught up with Faith to hear more about her work, her plans for the piece, and what it’s like to paint when you’re up so incredibly high.

Tell me about yourself.
I’m from South Africa, and I’m a street artist. My roots were in graffiti culture. I would say at the moment my practice is pretty multidisciplinary, but I still do mural work because I love the process of engaging with the public through art.

Why’d you want to do a project in Philly?
I’ve been in contact with Jane from Mural Arts for a few years now. We’ve been talking about working together and waiting for the right project to arrive. When the building developers contacted her, we thought it was a good fit — it just worked out with the timing and project. But it’s my first time in Philly.

And what’s your first impression?
I really love East Coast cities, and I feel like Philly is a real East Coast city. There’s a sense of community here that I feel. But I haven’t been here long enough … I would have to tell you how I feel after the mural [is finished], cause I’ll be spending a good few weeks here. But most of the interactions I’ve had so far are with Mural Arts, and I’m totally in admiration of what Jane has built. It seems to be having strong impact on the city over time, and the city itself has embraced Mural Arts. I’ve traveled to a lot of American cities and I’ve never seen anything quite like it.

What makes the program so different?
It’s not just a mural program. They’re activists at heart. They’re doing programs with young offenders, and when they do murals, they have a sense of benefiting the community.

PHILADELPHIA Things to come ⚡️ Such an honor to finally work with @muralarts. An organisation that does incredibly meaningful work in public art and activism. Spent the day in Philly finalizing plans for a mammoth 19-story mural this September. It’ll be my tallest mural to date. Pretty Badass eh.

You said this particular project feels like a good fit. Why?
It’s really nice and big. We’ve been looking for a good wall and enough of a budget to bring me over [from Los Angeles]. Also, the guys who are commissioning the piece are really nice to work with. They’re revamping the whole building but keeping all the tenants in it, so it feels like a good project to be part of.

Can you talk about the mural itself?
America at the moment is very polarizing, and I wanted to do something that felt nurturing and healing. The main image is a kind of guardian or protective mother figure. Bringing in the woman aspect is really important — I think part of the solution that we’re going to find to the issues we’re facing today is through gender empowerment, and the female perspective has so much to offer to society in terms of empathy and figuring out ways to heal and move forward. There’s also text, “Maneto,” which is on the Philadelphia coat of arms, and it roughly translates to “Let brotherly love endure.” It’s just a matter of remembering that we’re all family at the end of the day.

The mural is massive!
It’s 19 stories. It’s the biggest mural I’ve ever done. I’ve worked before on a 13-story mural, which was huge. There’s going to be a team of us — we’re going to get strategic on this because it’s a beast. But it’s going to be super fun. I’d like to have a mural that inspires people … not only people walking by, but also the residents who live there. Something that feels like it belongs to the community and adds some kind of emotional value to the area.

Don’t you get freaked out working so high up?
Yeah, it is scary. You have to remember what you’re doing and focus on that and not the ground, basically. There is a certain height where I start feeling a bit queasy, but I’ll just have to do it. There’s only one way to conquer your fears.

Salus Populi Suprema Lex Esto Skid Row, Los Angeles 2018 The move to Los Angeles was somewhat jarring. I couldn’t figure how to relate to this city, it was so foreign to me. It took me ages to find the inspiration to create an artwork here. The first self initiated large mural in LA since my move sits in Skid Row. The homelessness in Los Angeles is dire. Representational of massive gaps in the social services in this wealthy country. The flaws of Capitalism glaring as you drive over freeway passes, under bridges. This mural Was the response to the lack of institutional empathy and eventual desensitization of the public. Thanks to @co_labs for their help with this. Photos @impermanent_art @austinnovy_

What other issues does your work typically focus on?
I want to speak from my heart to the heart, so I’m trying to find a language that is not based on one specific culture. And I want to talk about universal topics. Sometimes it borders on activism, and sometimes it’s more personal and esoteric. Living sustainably on the planet, strong female figures, the natural world. It moves around.

Have you met any street artists from Philly yet?
I know the city’s mosaic artists are really renowned. I would like to meet them. I know Noségo, he’s a friend of mine. But I don’t know many people in Philly, so I’ll have to familiarize myself with the local community.