Are These Catalyst Experiential Billboards the Future of Advertising?
Subscribe
Follow
I'm a scraper
This search result is here to prevent scraping

Are Billboards as Civic Monuments the Future of Suburban Advertising?

What happened in Middletown could happen where you live. 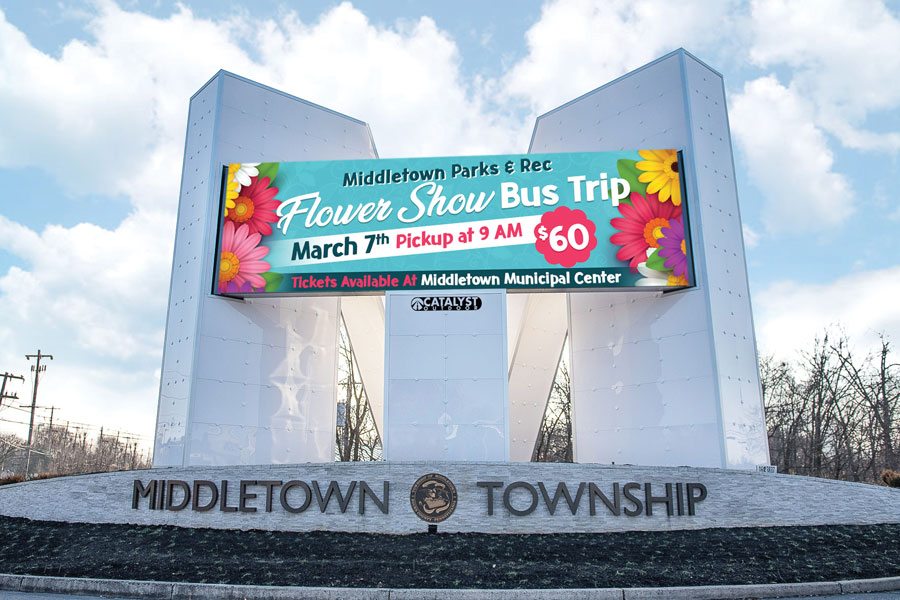 I didn’t think it was possible to make Business Route 1 in lower Bucks County look cheesier, but in Middletown Township, I believe they’ve pulled it off. At an intersection a half-mile from Sesame Place, midway between Jiffy Lube and Buffalo Wild Wings, a behemoth structure has risen skyward, hefting three colossal video screens. The Times Square-scale billboards flash at motorists in three directions with a rotation of luminescent offers: Lock into fixed-rate home equity loans. Laser hair removal. Buy 3 tires, get 1 free.

The signs jolt the senses on this low-rise retail stretch; did we miss that left for Levittown and wind up in Vegas? But these aren’t ordinary megatronic billboards — which is why what happened in Middletown could happen where you live.

The structure supporting the gargantuan ads is a letter M, 38 feet tall at its summit. I thought maybe Sesame Place was involved: This tire-rotation bargain is brought to you by the letter M.

No, the M is for Middletown. And the horizontal billboard forms part of a capital T. This is a government-approved monument to Middletown Township. Newtown Square-based Catalyst Experiential hopes this is the future in towns all over the region. The advertising company has been ingeniously winning support for its electronic billboards by designing them as civic assets. There’s a charming stone “gateway monument” displaying ads on Route 202 in Concord Township, and a three-sided circular sculpture at the intersection of 309 and 313 in Quakertown.

Naturally, these beacons haven’t come without pushback, which is likely why Catalyst lards its projects with benefits: a new amphitheater, a firehouse, a dog park — all with “electronic media centers” (a.k.a. billboards) built into the design.

Along Lancaster Avenue in Paoli/Tredyffrin Township, Catalyst has proposed a curvy landscaped sculpture saying “1707 Tredyffrin,” with “a living wall” made of plants, a reflecting pool using Chester County fieldstone, and high-resolution “visual communications technology” (ads). To be honest, the plan they pitched isn’t the ugliest thing I’ve ever seen.

In Middletown, Catalyst persuaded officials that a hulking M would be better than the abandoned transmission-repair shack that sat rotting on that property, bothering nobody. One feature of the Middletown Monument is that it can be lit from inside in different colors. Imagine: red for Christmas, green for the Eagles. One night, it radiated pinkish purple, with an ad for workers’ compensation pain specialists in the middle. I have to admit, as far as needless gigantic M’s go, that did look pretty awesome.

Published as “Welcome to [Your Ad Here]” in the April 2019 issue of Philadelphia magazine.